Pilocytic astrocytomas (PAs) are low-grade gliomas that constitute approximately 20% of all pediatric central nervous system (CNS) tumors.1 PAs in children are often associated with genetic alterations, which result in constitutive activation of BRAF or the downstream MAPK pathway.2 The most common activating events in PAs are the fusion of KIAA1549 and BRAF resulting in an activated oncogene (65%–90%),3,4 and a single nucleotide variant in BRAF resulting in a valine-to-glutamate substitution in amino acid codon 600 (BRAF p.Val600Glu) (6%–9%).2,5 BRAF p.Val600Glu is frequently observed in other low-grade gliomas, including pleomorphic xanthoastrocytomas (50%–66%) and gangliogliomas (20%).6

Patients with PAs typically have 10-year survival rates of 80% to 100% with complete resection. However, tumors located along the midline and disseminated PAs have a suboptimal response to conventional chemotherapy and a relatively poor prognosis.7 There are several reports of successful treatment of low- and high-grade gliomas with BRAF inhibitors (vemurafenib and dabrafenib).8–13 There is only a single report of 2 patients with PAs who were treated with trametinib, a MAPK pathway inhibitor,5 and no reports on MAPK pathway–targeted therapy for disseminated PAs. This report presents a series of 5 patients with progressive disseminated PA, and discusses the clinical response to targeted molecular therapy in 2 patients.

Patient 1 was diagnosed with PA at 5 years of age when she presented with persistent headache; MRI showed a solid and cystic posterior fossa tumor with patchy contrast enhancement. Over the next 7 years she underwent 3 incomplete surgical resections before experiencing progression with persistent growth of residual tumor and leptomeningeal dissemination. The 315-gene test identified BRAF V600E in her tumor; she was started on dabrafenib at 75 mg twice daily. After 3 months of therapy, the patient had a near complete response with mild T2 signal at the resection site, and resolution of leptomeningeal dissemination. Her most recent MRI, performed at 12 months after treatment initiation, showed minimal residual abnormal signal at the primary tumor site. Skin rash was the only toxicity observed.

Patient 2 presented with nystagmus at 13 months of age. Imaging identified a large optic-hypothalamic PA. She underwent surgical debulking and received 4 distinct chemotherapy regimens over 3 years (carboplatin/vincristine, cisplatin/cyclophosphamide/etoposide, bevacizumab/irinotecan, temozolomide/everolimus) due to progressive disease (Figure 1A–D). BRAF V600D was identified in the tumor by the 25-gene test, and she was treated with dabrafenib at 50 mg daily due to further progression. After 3 months of therapy, there was improvement of 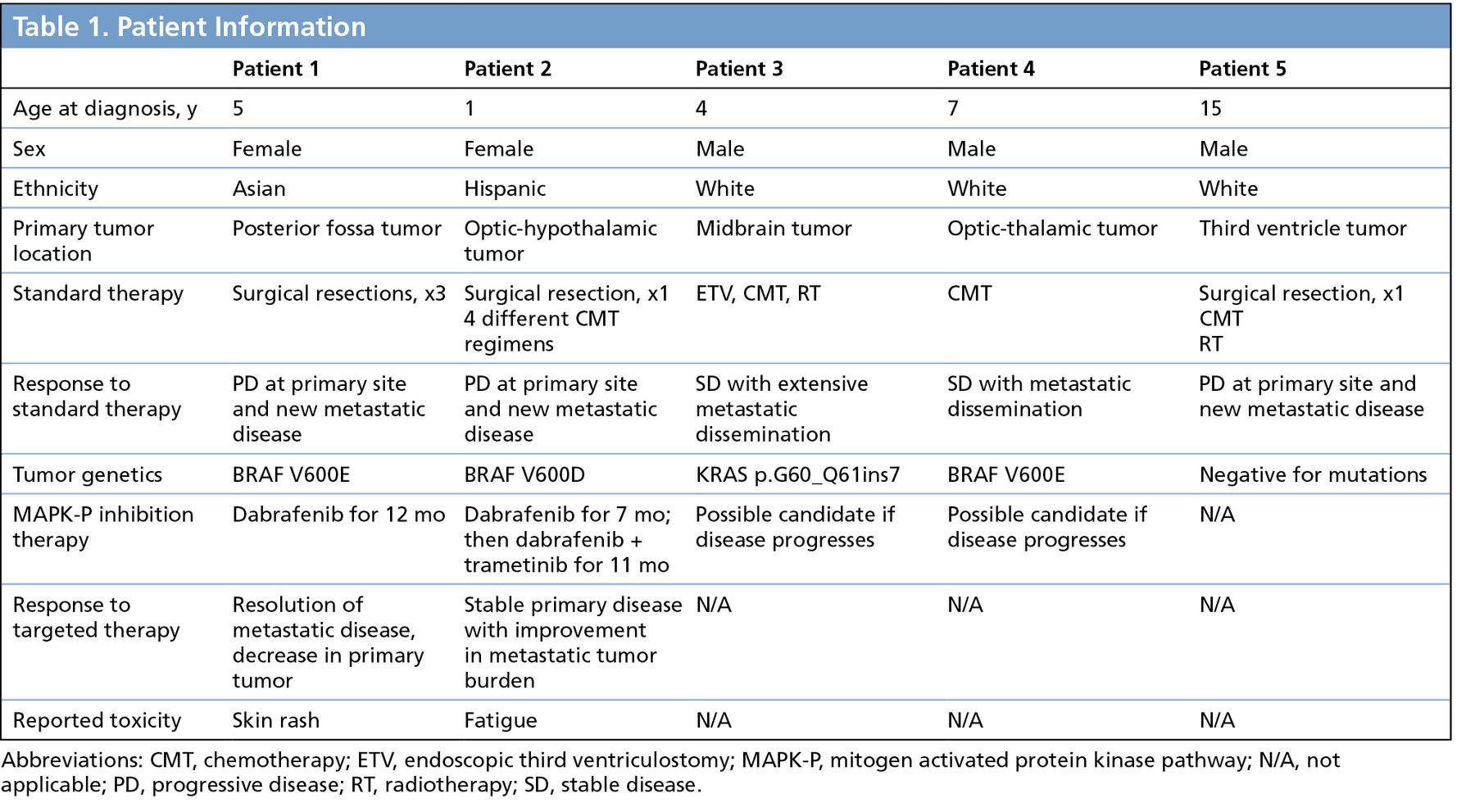 leptomeningeal disease with stable primary site disease; however, at 6 months of therapy with single-agent dabrafenib, an increase in primary site tumor burden (with stable leptomeningeal disease) was observed on imaging (Figure 1E, F). Subsequently, the MEK inhibitor trametinib was added at 0.5 mg daily, and stable disease was achieved after 3 months of combined dabrafenib and trametinib therapy (Figure 1G). Her most recent MRI after 11 months of combination therapy showed stable disease. The only reported adverse effect was fatigue.

Patient 4 presented with precocious puberty and vision concerns at the age of 7 years; he was subsequently diagnosed with large optic PA infiltrating into the thalamus and brainstem. He was treated with chemotherapy (carboplatin + vinblastine) with overall stable disease status. BRAF V600E was identified in the tumor using the 25-gene test, and he may be a future candidate for targeted therapy if his disease progresses.

Patient 5 was diagnosed at 15 years of age with a third-ventricle PA with metastatic disease to the spinal cord. He underwent subtotal surgical tumor resection followed by chemotherapy (carboplatin + vincristine). His follow-up MRI after 3 months of treatment showed interval progression of the primary tumor mass and metastatic disease along ependymal surfaces. Craniospinal RT was recommended given his progressive and metastatic tumor. His tumor tested negative for activating variants by the 25-gene test. Evaluation for the KIAA1549-BRAF fusion is being considered.

In our study, 4 of 5 patients with disseminated PAs had nonfusion MAPK pathway–activating events, including BRAF V600E, BRAF V600D, and KRAS G60_Q61 ins7. The fifth patient, whose tumor was negative for activating variants, was analyzed using the 25-gene panel test, which does not detect the BRAF fusion. Of the 4 patients who tested positive for an activating event, 3 had an extracerebellar location of the primary tumor in the optic/thalamic region (BRAF V600E), optic/hypothalamic region (BRAF V600D), and mid-brain (KRAS G60_Q61 ins7; Table 1). BRAF V600D has not been previously reported in low-grade gliomas, but is a known activating mutation in melanoma which can be inhibited by dabrafenib.14 KRAS G60_Q61ins7 has only been reported once previously in a patient with juvenile myelomonocytic leukemia; this KRAS mutation had in vitro sensitivity to MEK inhibition.15

In 2013, a whole-genome sequencing study of 96 patients with PAs was reported by the International Cancer Genome Consortium PedBrain Tumor Research Project.16 In this study, MAPK pathway activation was identified in all PAs. The most frequent activating events were gene fusions involving BRAF or NTRK2. Nonfusion activating mutations were identified in the BRAF, FGFR1, NF1, KRAS, and PTPN11 genes. A separate whole-genome sequencing study of 39 low-grade gliomas and low-grade glioneuronal tumors similarly identified MAPK pathway–activating mutations in 95% of cases in a combined category of PAs and pilomyxoid astrocytomas.17 Of importance to the present case series, a recent report identified that PAs with dissemination have similar genetic findings to PAs without dissemination.18 Unlike the currently presented series of patients, which showed only nonfusion mutations, the prior series of 17 patients with disseminated PAs showed KIAA1549-BRAF fusion in 8 of 12 patients tested (66.6%; 5 patients could not be tested by fluorescence in situ hybridization); only 1 of the 17 patients had a BRAF mutation, and no patients had mutations in HRAS, KRAS, NRAS, or FGFR1 on targeted analysis.18 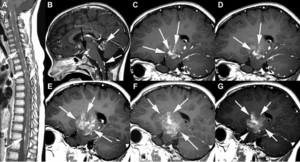