Background: During the past 2 decades, numerous clinical trials have focused on improving outcomes in patients with metastatic pancreatic cancer (mPDAC). The efficacy of new treatments has been demonstrated among highly selected patients in randomized phase III trials; hence, it is not clear to what extent these advances are reflected within the broader mPDAC population. Materials and Methods: Survival statistics were extracted from the SEER database for patients diagnosed with mPDAC between 1993 and 2013. Survival was analyzed using the Kaplan-Meier method and proportional hazard models. Results: The study population consisted of 57,263 patients diagnosed with mPDAC between 1993 and 2013; 52% were male, with a median age of 69 years (range, 15–104). Superior prognosis correlated with younger age, being married, tumor located within the head of the pancreas, lower grade disease, and more recent year of diagnosis. Median overall survival (OS) remained stable at 2 months between 1993 and 2013. Improvements in OS were seen for younger patients (age <50 years) and those with a more recent year of diagnosis (2009–2013). The percentage of patients who died within 2 months of initial diagnosis decreased between 1993 and 2013 (from 63.5% to 50.6%; P<.0001). The percentage of patients surviving ≥12 months improved from 4.9% in 1993 to 12.7% in 2013 (P<.0001). Conclusions: In recent years a modest improvement in OS has been seen among younger patients with mPDAC. The percentage of patients living beyond 1 year has significantly increased over time; however, the percentage of those dying within 2 months remains substantial.

In recent years, substantial advances in the diagnosis and treatment of cancer have increased survival rates for most cancers. Despite this progress, death rates for pancreatic cancer (PDAC), the fourth-leading cause of cancer death among men and women, are continuing to increase, and the current 5-year relative survival rate is only 8%.1 These low survival rates are partly explained by the fact that >50% of cases are diagnosed at a late stage, for which the 5-year survival rate is a dismal 2%.

Through the 1990s, 5-fluorouracil (5FU) was the principal treatment option for metastatic PDAC (mPDAC), achieving a median overall survival (OS) of 6 months.2 In 1997, Burris et al3 demonstrated the superiority of gemcitabine over 5FU in achieving clinical benefit, improving median OS, and increasing the survival rate at 12 months from 2% to 18%. After this landmark study, numerous studies of doublet chemotherapy and biologic therapies were tested, yet failed to demonstrate a significant benefit in OS over gemcitabine monotherapy, until recently. In 2011 and 2013, progress was made with the publication of the PRODIGE 4/ACCORD 114 and MPACT5 studies, showing survival benefits for FOLFIRINOX and gemcitabine/nab-paclitaxel, respectively, compared with gemcitabine monotherapy. Importantly, FOLFIRINOX achieved an unprecedented 11.1 months OS with a 48.4% 1-year survival rate, while notably excluding patients aged >75 years or with an ECOG performance status (PS) >14; the mean age at mPDAC diagnosis in the United States is 68 years.6 In one recent study, 34% of patients with mPDAC had an ECOG PS of 2 to 4 at presentation.7 Thus, the impact of these advances on the general population of patients with mPDAC, as opposed to a clinical trial population, may still be limited. Furthermore, additional medical advances have been introduced within the past 2 decades, including active supportive care interventions, multidisciplinary tumor boards, and more accurate imaging modalities.

The SEER database has served as an important resource for the study of trends in PDAC mortality. Although most studies have described general population trends,8,9 analyses of relative survival have generally focused on long-term survivors by limiting for age10 or excluding short-term survivors.6 The present study aims to investigate OS in mPDAC over 2 decades, focusing on patients at both extremes of the survival spectrum. 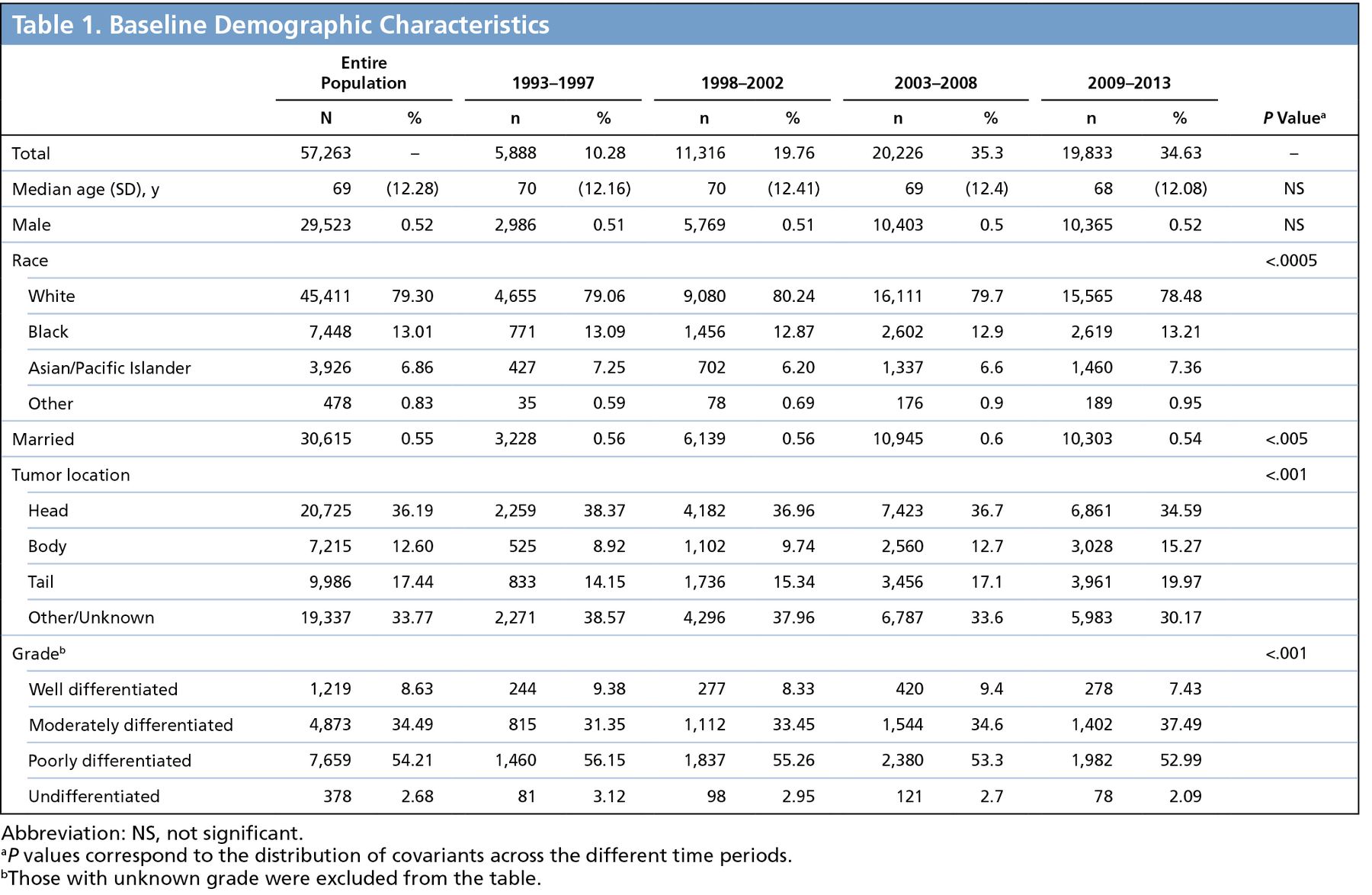 Univariate Analysis of HR for Death 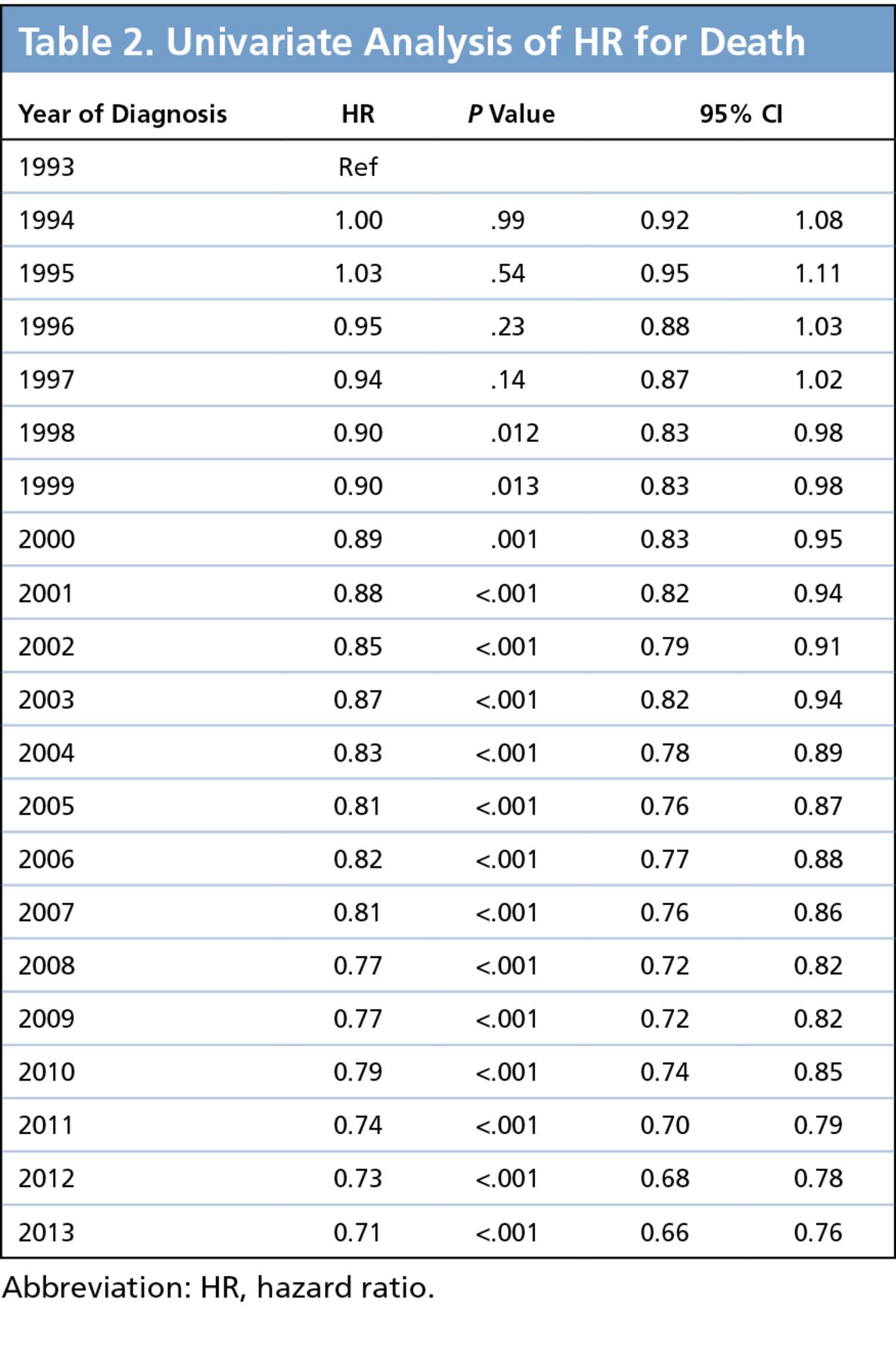 For the purposes of descriptive analysis (but not survival analysis), continuous variables (eg, age and year at diagnosis) were converted into categorical variables. Statistical analyses were performed using the Stata statistical package, version IC 11.1 (Stata, College Station, TX). Chi-square tests were used to assess associations between categorical variables. OS was defined from the time of initial diagnosis to the date of death, and was calculated using the Kaplan-Meier method. In the SEER database, survival is reported as complete months and rounded down to the nearest month; therefore, patients with survival <30.4 days are listed as having survival of 0 months. To ensure that these patients were included in the analysis, those coded in the SEER data set as having a survival time of 0 were reassigned a survival time of half a month.12 The effects of demographic, pathologic tumor grade, primary tumor site, and age variables on survival were tested with a Cox univariate analysis. Multivariate analysis was performed with a Cox proportional hazard model. All P values were 2-sided, and P<.05 was considered statistically significant.

Demographic characteristics are presented in Table 1. Median age at diagnosis for the study population was 69 years, 52% were men, and 79.3% were Caucasian. The median age at diagnosis between years 1993 to 2013 decreased from 70 to 68 years. The percentage of patients in different age groups has varied over the course of the 20 years without any consistent trend; for instance, the percentage of patients diagnosed aged <50 years has decreased from 8.4% to 5.1%, whereas the percentage of patients aged >84 years has increased from 5.25% to 8.4%. Of those with a documented grade, 43.1% were well to moderately differentiated and 56.9% were poorly or undifferentiated. Median OS of the entire metastatic population was 2 months and has not changed in the 2 decades studied. Nonetheless, the hazard ratio (HR) for risk of death has shown a consistent and statistically significant improvement from 1993 to 2013 (HR for death was 0.71 in 2013 vs 1993; 95% CI, 0.66–0.76; P<.001; Table 2). It appears that the prognosis has improved principally among younger patients, especially those aged <50 years, but not among older patients (age ≥85 years) (Figure 1);

On univariate analysis, multiple factors were associated with OS (Table 3). On multivariate regression analysis incorporating age, marital status, tumor location, tumor grade, and year of diagnosis, all variables remained significantly associated with OS (Table 3). The SEER database expanded in 2000; however, OS trends are similar in both the original and newly added registries despite slight differences in the ethnic racial composition (supplemental eTables 3 and 4). A sensitivity analysis was performed by reassigning those with missing stage data (MX) as stage IV disease (supplemental eTable 5). Again, no difference in OS was observed over the course of study period (supplemental eTable 6). In approximately one-third of patients, the sublocation of the tumor was unknown; therefore, an additional sensitivity analysis was performed by excluding these patients, which demonstrated a modest improvement in median survival, from 2 to 3 months, during the study period (supplemental eTable 7). 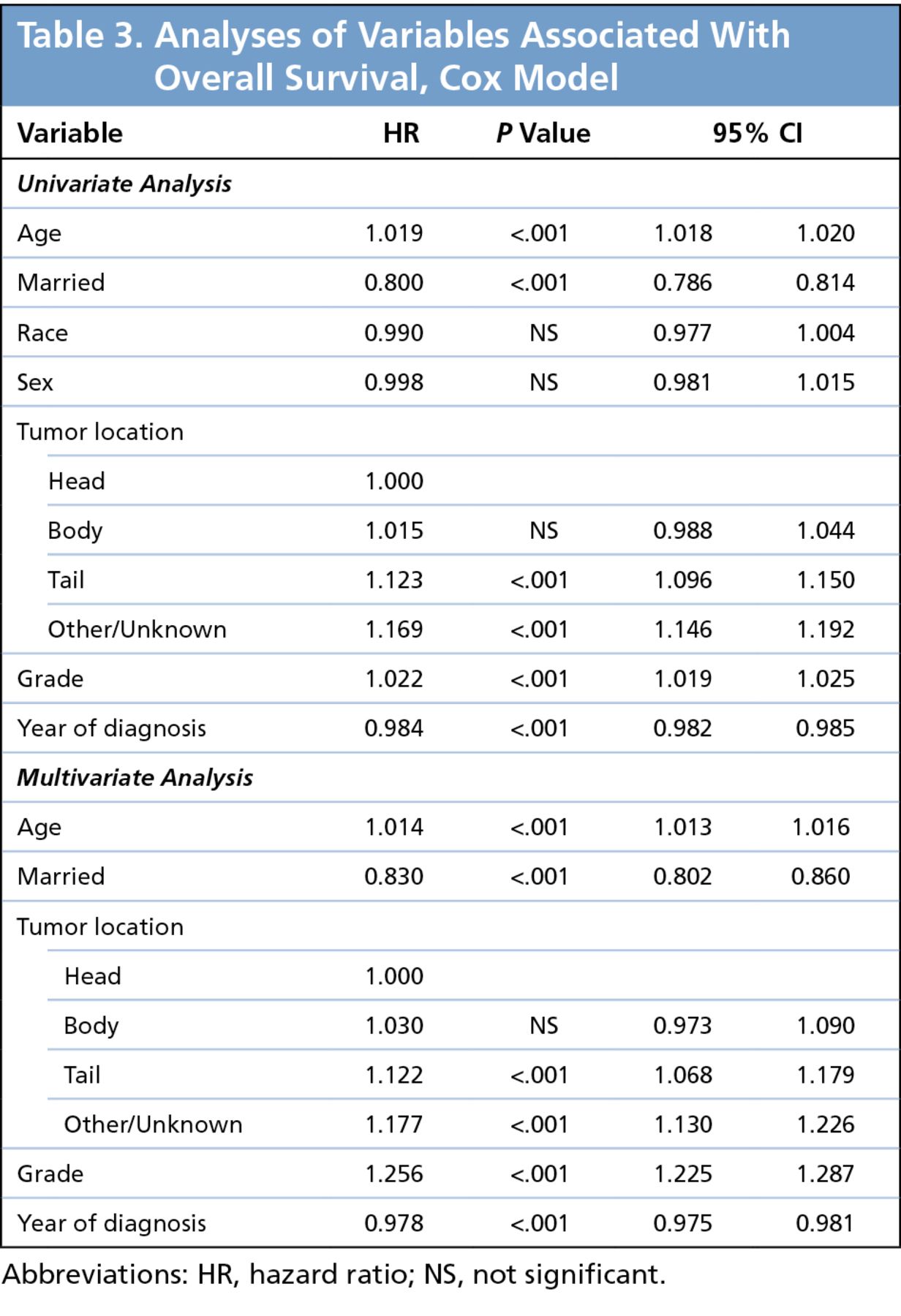 Using a population-based database, this study demonstrates that median OS has not improved among patients with newly diagnosed mPDAC during the past 20 years. A previous SEER analysis6 showed a modest increase in median OS over time. The discrepancy in the results may be due to the different analytic methods used. The substantial number of patients coded in the SEER data set as having a survival time of 0 (ie, <1 month) are often excluded

from survival analyses, whereas our analysis included them, reassigning them a survival time of half a month.12 Importantly, our reported results are comparable to 2016 US cancer statistics.1

Approximately half of the patients diagnosed with mPDAC lived <2 months. The SEER database provides no information on the use of systemic and palliative therapies, and therefore it is unclear whether an oncologist or cancer-specific supportive care team attended to these patients. It would appear that this large subset of patients is underrepresented in clinical trials, likely because they do not meet stringent inclusion criteria, including adequate organ functioning and good PS. This was demonstrated in a meta-analysis of phase III clinical trials showing that only approximately 20% of patients died within 3 months.13 The poor representation of these short-term survivors in clinical trials artificially improves the reported median OS.

Conversely, our results show that the fraction of patients who achieve long-term survival in mPDAC has increased during the past 2 decades. Incremental improvement has been seen in all age groups, but is most significant among younger patients (<50 years of age). Furthermore, between 2009 and 2013 there appears to have been a marked increase in the percentage of long-term survivors, possibly reflecting the introduction of combination chemotherapy.

The strengths of our study include the large size of the database, with its broad coverage of age ranges

Demographics of Short- Versus Long-Term Survivors 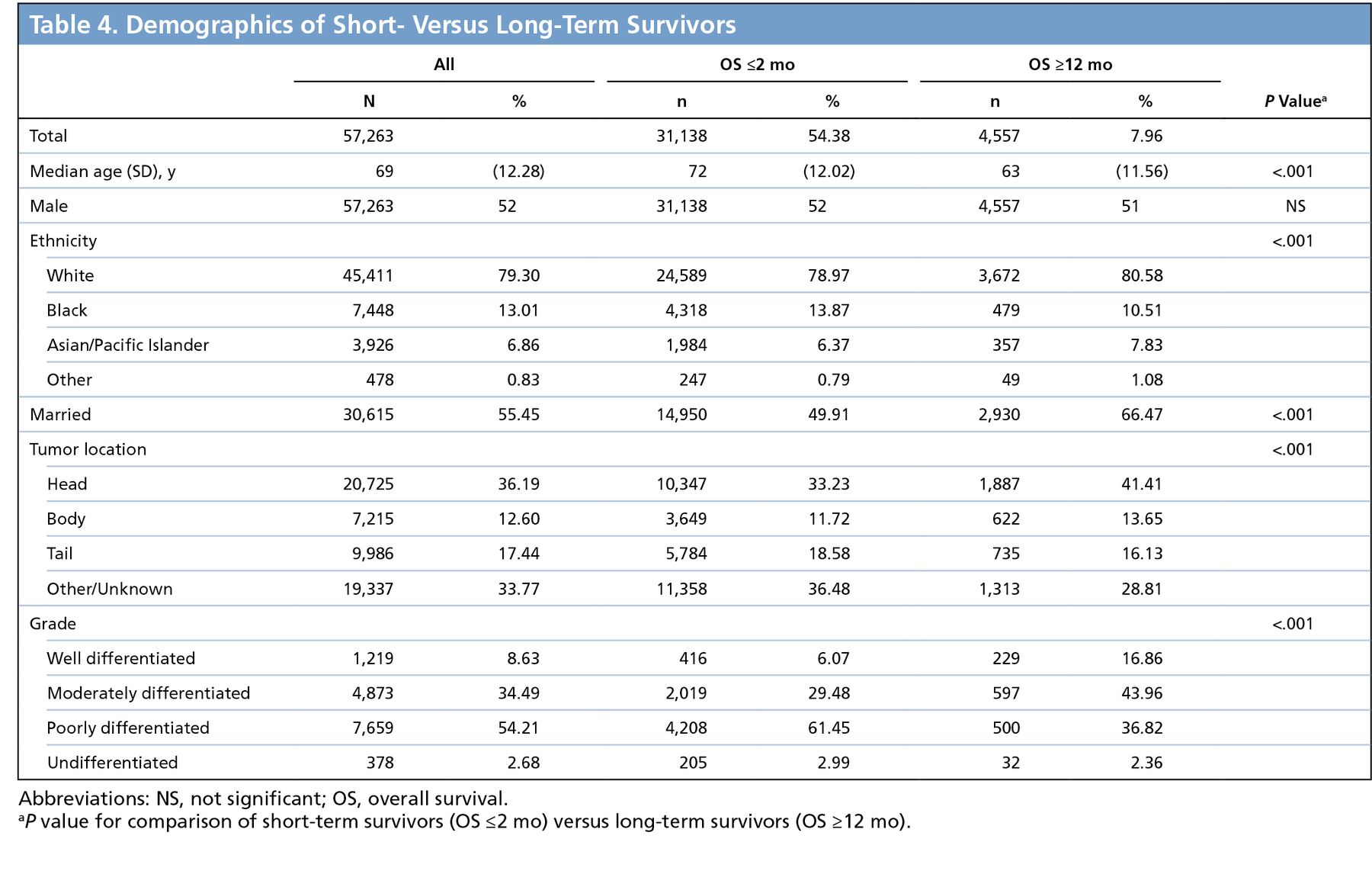 and ECOG PS, unlike prospective clinical trials or retrospective studies based on single-institution experience. Furthermore, this is a well-validated and reliable data set with long-term follow-up.14,15 However, due to the very large size of the database, statistically significant associations may not be clinically relevant. We focused our analysis on clinically relevant changes.

The shortcomings of our study include its retrospective nature and our inability to assess causative associations in the trends identified, specifically the lack of data regarding systemic and palliative interventions that may impact survival outcomes. Therefore, we cannot determine the causative factors contributing to the improvement in long-term OS, seen in some of the subpopulations. Additional databases need to be interrogated to address these critical issues.

Among patients with mPDAC, no improvement in median OS has been observed during the past 2 decades. Disturbingly, even in 2013, most patients died within 2 months of diagnosis. Clinical studies, specifically incorporating tissue acquisition, are urgently needed to further investigate this substantial patient population that has yet to benefit from advances in modern medicine.

Median overall survival, as a function of year of diagnosis, stratified by age group.

Proportion of patients with metastatic pancreatic cancer, as a function of time, who lived <2 months or ≥12 months. 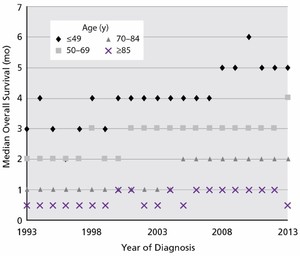 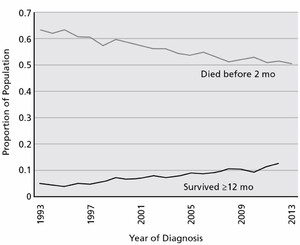