Background: In this study, we evaluated the 8th edition of the Union for International Cancer Control (UICC)/AJCC staging system for nasopharyngeal carcinoma (NPC) in an endemic area, with the aim of validating its applicability and providing further information for future refinements. Methods: A total of 1,790 patients with newly diagnosed, non–distant metastatic, histologically proven NPC treated with intensity-modulated radiotherapy (IMRT) were retrospectively reviewed. The performance of various staging systems was compared using the Akaike information criterion (AIC) and Harrell's concordance index (c-index). Results: For N (node) category, the survival curves of different groups according to the 8th edition were well-separated, and the prognostic model predicted outcomes fairly well. The 8th edition had higher AIC and c-index values for all end points than the 7th edition. However, probably due to the improved locoregional control provided by IMRT, the survival curves for T2 and T3 almost overlapped, without significant differences in locoregional failure-free survival (P=.606) and disease-free survival (P=.735). Due to the difficultly of differentiating T2 and T3, the AIC and c-index values were similar for the T categories of the 7th and 8th editions. Similarly, the overall survival and disease-free survival curves for stage II and III disease were not clearly separated for either the 8th or 7th editions. Conclusions: The 8th edition of the UICC/AJCC staging system for NPC enables more accurate prediction of treatment outcomes. However, several limitations need to be addressed in future editions, and it would be reasonable to further optimize the T category classification. 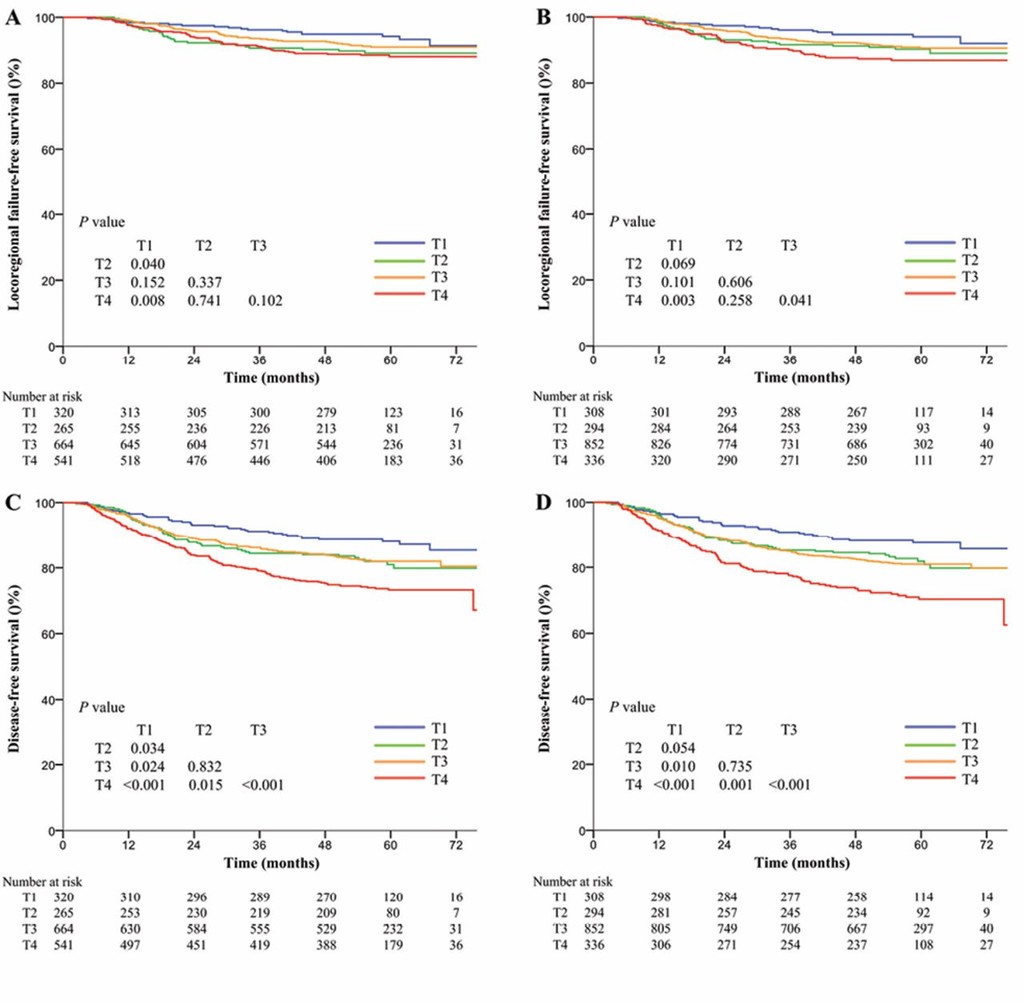 Locoregional failure-free survival (A, B) and disease-free survival (C, D) for each T category as defined by the 7th (A, C) and 8th (B, D) editions of the Union for Internation Cancer Control/AJCC staging system. 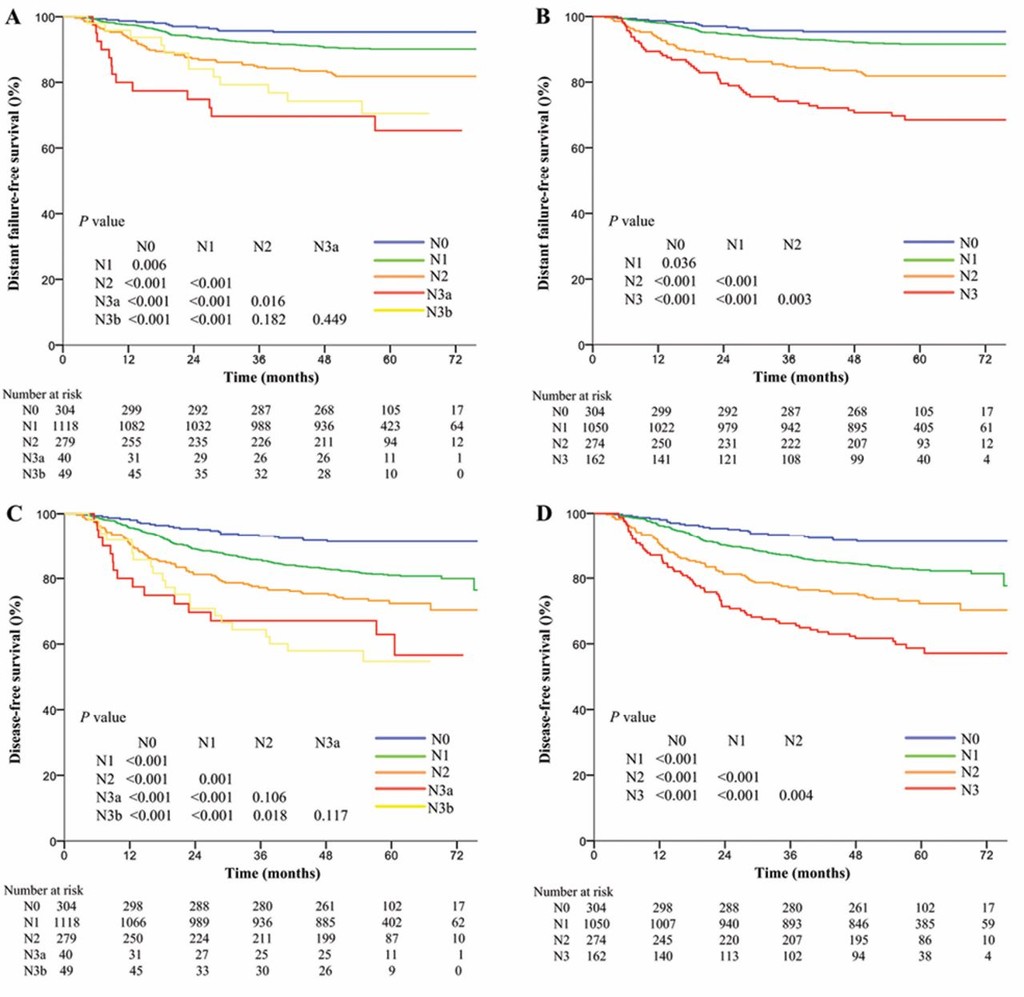 Distant failure-free survival (A, B) and disease-free survival (C, D) for each N category as defined by the 7th (A, C) and 8th (B, D) editions of the Union for International Cancer Control/AJCC staging system. 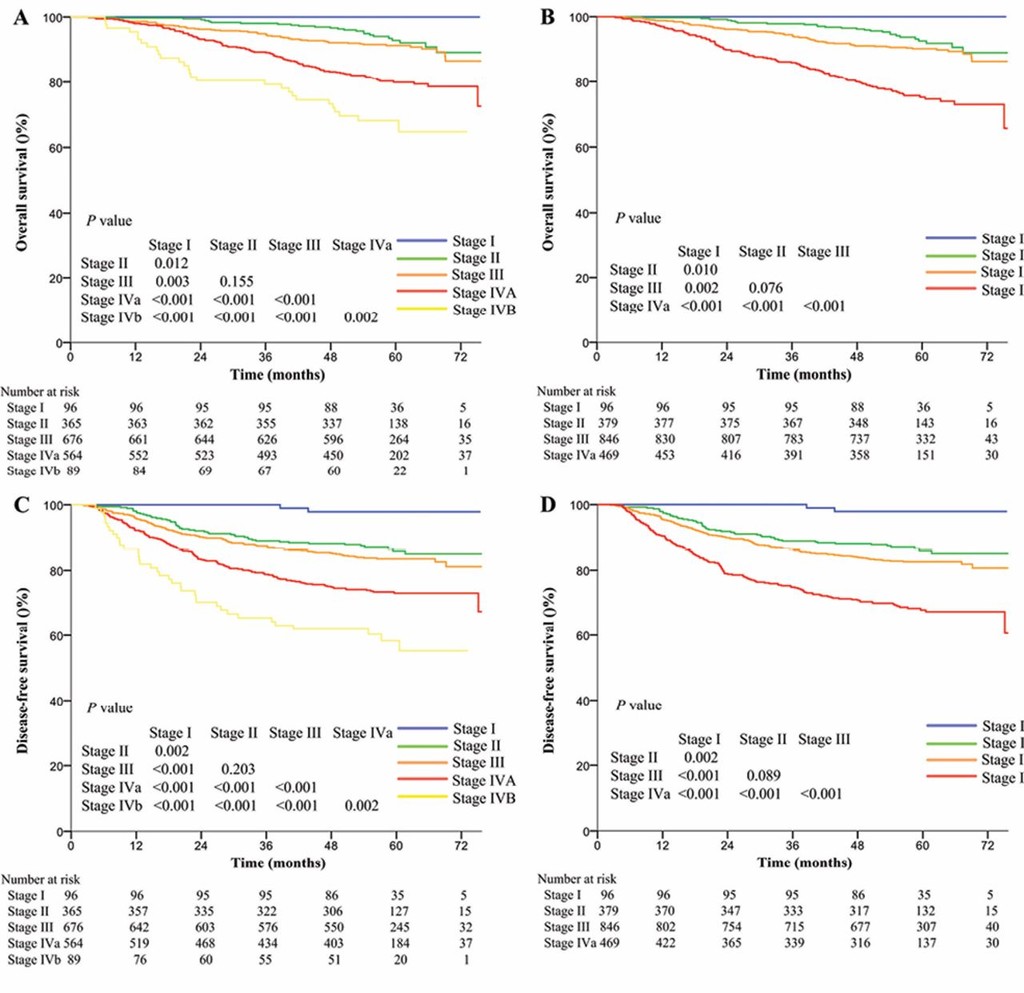 Overall survival (A, B) and disease-free survival (C, D) for each stage group as defined by the 7th (A, C) and 8th (B, D) editions of the Union for International Cancer Control/AJCC staging system. 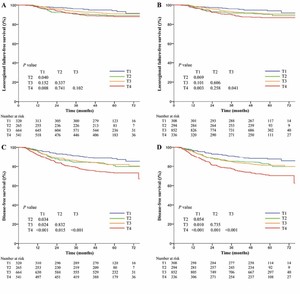 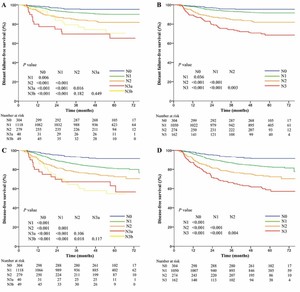 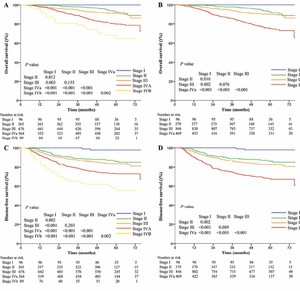