Background: Mutations in the BRCA1 and BRCA2 genes predispose individuals to a significantly elevated risk for breast and ovarian cancers. Identification of these individuals allows for proper screening, management, and testing of at-risk relatives. NCCN has established clinical criteria for recommending BRCA1/2 testing. Patients and Methods: A retrospective chart review of 1,123 patients with breast cancer was performed to evaluate the positive predictive values (PPVs) of 14 individual criteria for predicting BRCA1/2 mutations. Results: Two criteria had PPVs significantly below 10%. Only 2 of 115 patients who were recommended for testing based solely on the criterion of “diagnosed with breast cancer at ≤45 years of age” had pathogenic mutations at a PPV of 1.6% (95% CI, 0.2%–6.0%). Additionally, 0 of 37 individuals who underwent testing based on the criterion, “diagnosed with breast cancer at any age with ≥2 close blood relatives with breast cancer at any age” tested positive (95% CI, 0%–9%). Overall, meeting >1 criterion has a PPV of 12%, whereas meeting only 1 criterion has a PPV of 3.2% (95% CI, 1.6%–5.7%), significantly below 10% (P<.0001) for predicting BRCA1/2 positivity. Conclusions: Patients with breast cancer meeting >1 criterion constitute a population significantly enriched for BRCA1/2 mutations, whereas those meeting only 1 criterion test positive at a rate similar to unselected patients with breast cancer. These data will inform ongoing discussions regarding how to best implement BRCA1/2 genetic testing.

In the United States, 1 in 8 women will develop breast cancer in her lifetime. Although breast cancer is common, only 5% to 10% of these breast cancers are hereditary.1 Hereditary breast and ovarian cancer syndrome (HBOC) associated with germline mutations in the BRCA1 and BRCA2 genes2 is the most common hereditary breast cancer predisposition. In the general population, approximately 1 in 400 people (possibly up to 1/200 in select populations) have a BRCA1/2 mutation.2–5 Although BRCA1/2 mutations are rare, their identification is crucial because the associated 45% to 85% lifetime risk for breast cancer, 11% to 40% lifetime risk for ovarian cancer, and increased risks for pancreatic, male breast, and prostate cancers6–9 warrant specialized screening and prevention. In particular, risk-reducing bilateral salpingo-oophorectomy in women with BRCA1/2 mutations meets the gold standard of demonstrated benefit via decreased cancer incidence and all-cause mortality.10

Throughout the past 20 years during which BRCA1/2 genetic testing has been clinically available, the question of who should be offered genetic testing has been debated. Because most breast cancer is not attributable to BRCA1/2 mutations, this debate has included the question of how to identify patients with breast cancer who are at higher risk of having a mutation based on analysis of personal and family history of cancer. Risk prediction models such as BRCAPRO and BOADICEA11,12 calculate the percentage likelihood of an individual testing positive for a BRCA1/2 mutation. However, consensus regarding what percentage likelihood is high enough to warrant offering genetic testing has never been reached. The 1996 “Statement of the American Society of Clinical Oncology: Genetic Testing for Cancer Susceptibility” mentioned >10% as an example of a high estimated probability of mutation detection13; subsequent versions (including the current version)14 do not cite a specific numerical threshold. Absent clear consensus regarding the question of threshold, ≥10% mutation probability has been a commonly cited reference point. The American Congress of Obstetricians and Gynecologists (ACOG),15 health insurance companies such as Aetna,16 and researchers who have studied risk-prediction models11,12 have continued to include ≥10% probability as a consideration in determining who should undergo genetic testing.

Given how widely adopted the NCCN BRCA1/2 testing criteria are, it is important to understand how they perform. To our knowledge, the positive predictive value (PPV) of the NCCN criteria has not been previously studied. Therefore, our study goal was to assess the PPV of the NCCN criteria for recommending BRCA1/2 genetic testing in patients with breast cancer.

After Institutional Review Board approval was obtained, a retrospective chart review was performed of 1,123 patients with breast cancer who were seen for genetic counseling at our institution between March 31, 2013, and June 30, 2014. Because of the rarity of male breast cancer, all male patients with breast cancer seen for genetic counseling were included (genetic testing dates ranged from September 9, 1999–June 30, 2014). All 1,123 study participants had a personal history of either invasive breast cancer or ductal carcinoma in situ and had complete 3-generation pedigrees available for review. All patients had undergone clinical genetic testing that included BRCA1 and BRCA2 and other high penetrance genes as indicated based on personal/family history. None of the study participants had undergone panel genetic testing.

Each participant's medical and family histories were assessed to determine which of the NCCN BRCA1/2 testing criteria (Version 1.2014) were met. Twenty-five participants were then excluded from the study because they underwent BRCA1/2 testing without having met any NCCN criteria for HBOC genetic testing. Of note, all 25 tested negative. An additional 26 participants were excluded from the study due to having BRCA1/2 variants of unknown significance. The 1,072 genetic testing results that remained eligible for analysis were grouped as follows: positive results included those which were reported as “deleterious” (55 in BRCA1; 36 in BRCA2), “suspected deleterious” (1 in BRCA1; 3 in BRCA2), and “see below” (1 in BRCA1; 3 in BRCA2). 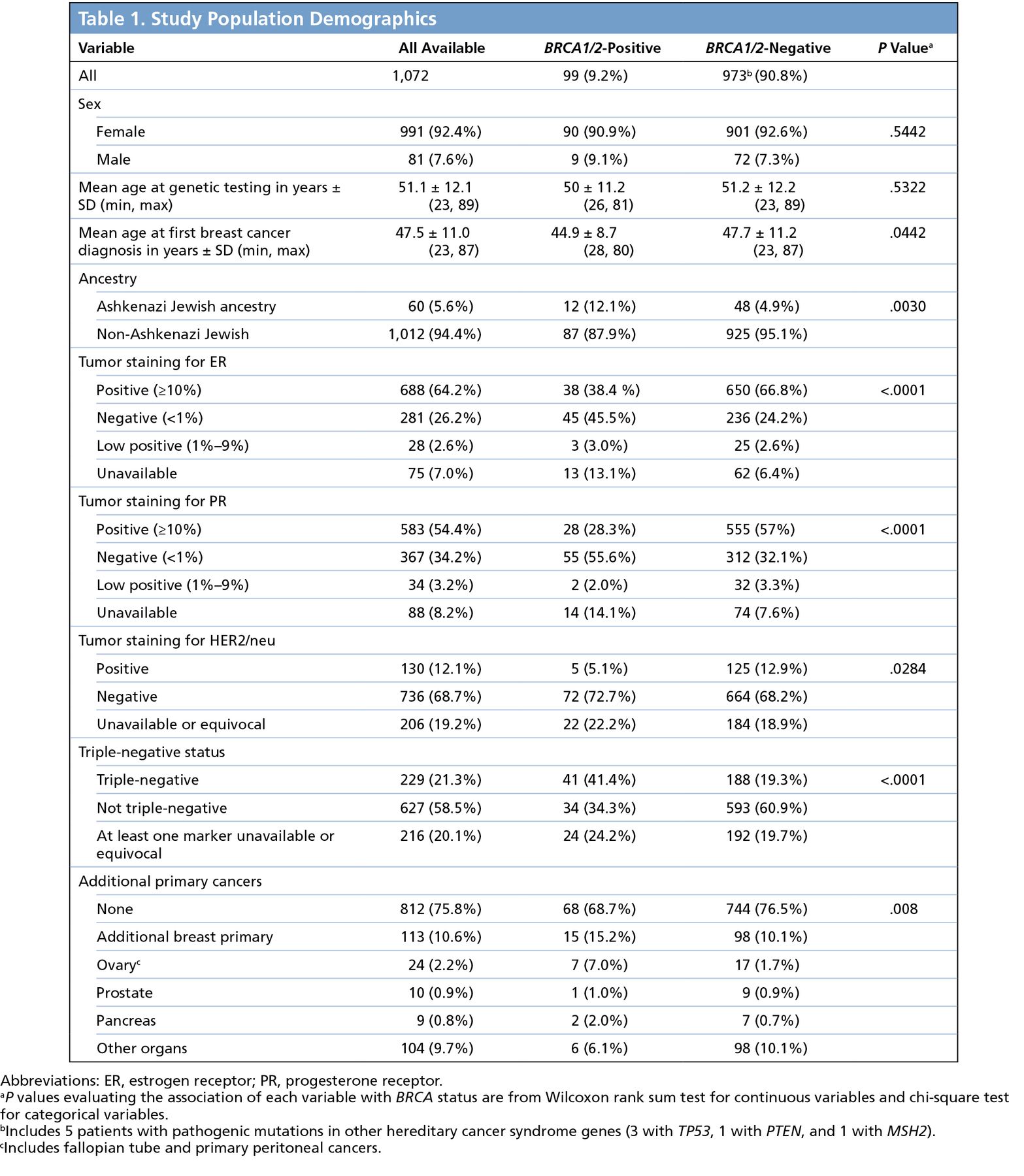 PPVs Based on Number of Criteria Fulfilled

Study population demographics were compared between BRCA1/2-positive and BRCA1/2-negative participants using the chi-square test for categorical variables and the Wilcoxon rank sum test for continuous variables. Chi-square and Fisher exact tests were used to calculate whether any single or combined groups of criteria had PPVs significantly <10%.

Study population demographics are summarized in Table 1. Overall, 9.2% of the study population tested positive for a BRCA1 or BRCA2 mutation. Patients who were BRCA1/2-positive were younger at breast cancer diagnosis than those who tested negative (44.9 vs 47.7 years; P=.0442). Patients with tumors that were ER-negative (P≤.0001), PR-negative (P≤.0001), and HER2/neu-negative (P=.0284) were more likely to be BRCA1/2-positive. Five individuals who tested negative for a BRCA1/2 mutation carried a pathogenic mutation in another hereditary cancer syndrome gene (3 TP53, 1 PTEN, 1 MSH2).

When patients with breast cancer fulfilled ≥2 NCCN criteria, the BRCA1/2 mutation rate was 12%, thus confirming that genetic testing is clearly indicated for those who meet ≥2 NCCN criteria. When patients with breast cancer undergo BRCA1/2 genetic testing based on meeting only 1 of the NCCN criteria, however, the yield of positive results is significantly <10%. In individuals who fulfilled any 1 NCCN criterion, the mutation yield was 3.2%. Among patients diagnosed at ≤45 years of age who did not meet any other testing criteria, the mutation yield was even lower at 1.7%. In addition, 0 of 37 patients who underwent testing solely based on having 2 relatives with breast cancer tested positive for a BRCA1/2 mutation. This information can be used during pretest genetic counseling to help patients understand their likelihood of testing positive.

The NCCN Guidelines also provide a separate set of criteria titled, “Criteria for Further Genetic Risk Evaluation.” These criteria are looser than the BRCA1/2 testing criteria, and are intended to help healthcare providers identify individuals for whom formal risk assessment should be undertaken. Given the relatively low yield of even the stricter testing criteria demonstrated by this study, the utility of these looser criteria is unclear and should be further evaluated.

A helpful point of reference in evaluating these yields is to compare them with the prevalence of BRCA1/2 mutations in unselected patients with breast cancer. Previous studies suggest that the prevalence 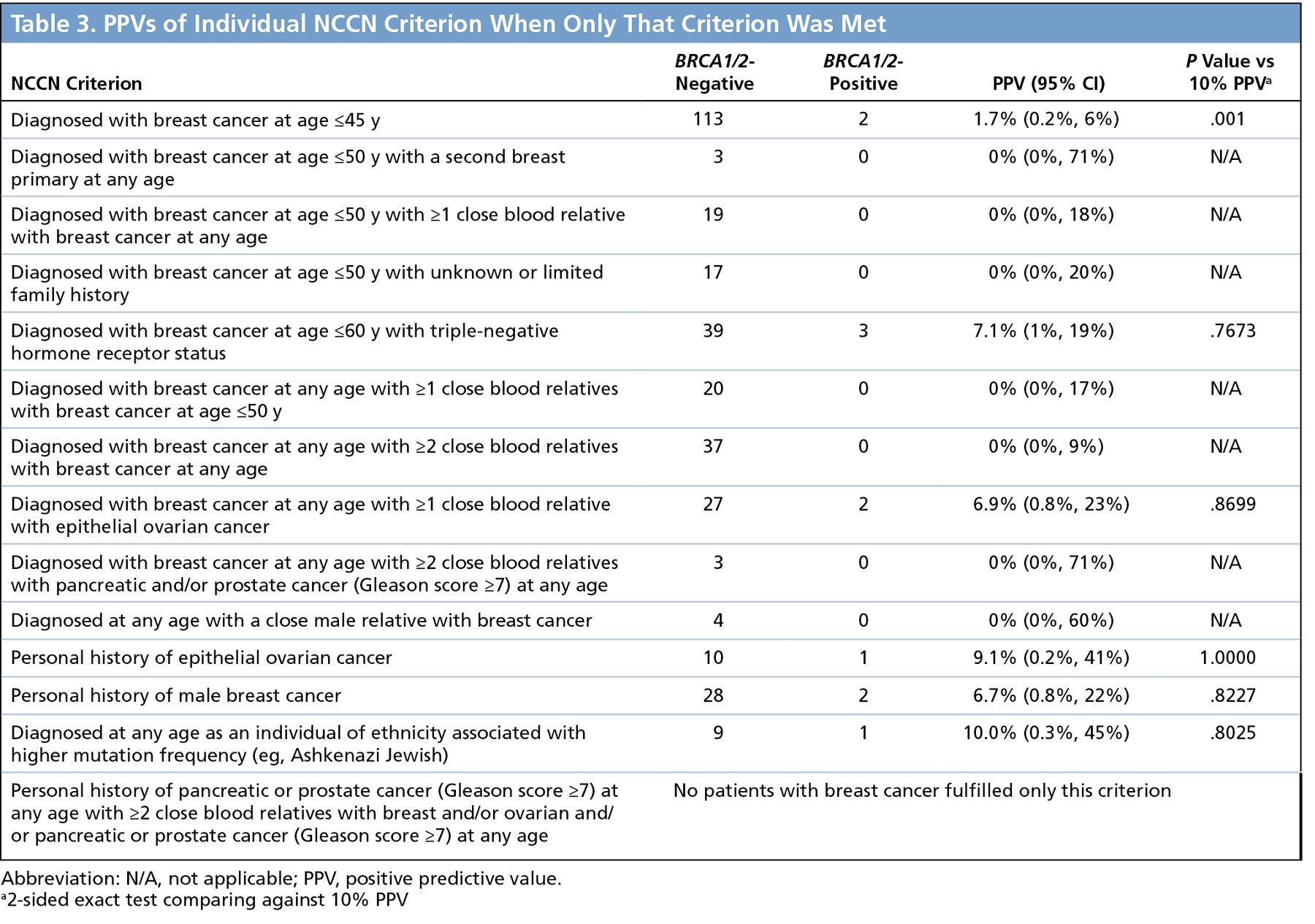 The main purpose of genetic testing criteria such as those of the NCCN is to identify individuals for whom the likelihood of testing positive justifies the costs of undergoing genetic testing. During the past 20 years, the availability of genetic testing has increased, cost has decreased, rate of detection of variants of uncertain significance has also decreased, and the Genetic Information Nondiscrimination Act of 2008 became law. Therefore, a 10% pretest probability threshold is probably too restrictive. What should that threshold now be? Consensus has not been reached on this topic. Our study demonstrates that patients with breast cancer are currently being offered BRCA1/2 genetic testing based on criteria that have a 3.2% mutation yield. Because this is similar to the likelihood of an unselected patient with breast cancer diagnosed at <70 years of age testing positive, perhaps it is acceptable to consider genetic testing for all individuals with breast cancer, or for all individuals diagnosed with breast cancer at <70 years of age and for those diagnosed at >70 years of age who meet other testing criteria. This would also be comparable to the 2% to 3% likelihood of identifying Lynch syndrome in unselected patients with colorectal cancer, for whom universal Lynch syndrome screening has gathered wide support.22

Offering genetic testing to all patients with breast cancer would significantly increase the size of the testing population, which would pose practical barriers. On the other hand, this would be a less drastic step than implementing general population screening for BRCA1/2 mutations, as was recently proposed23 (and challenged24), which would vastly expand the target population and lower the yield even further. Given that mutations in other high-penetrance 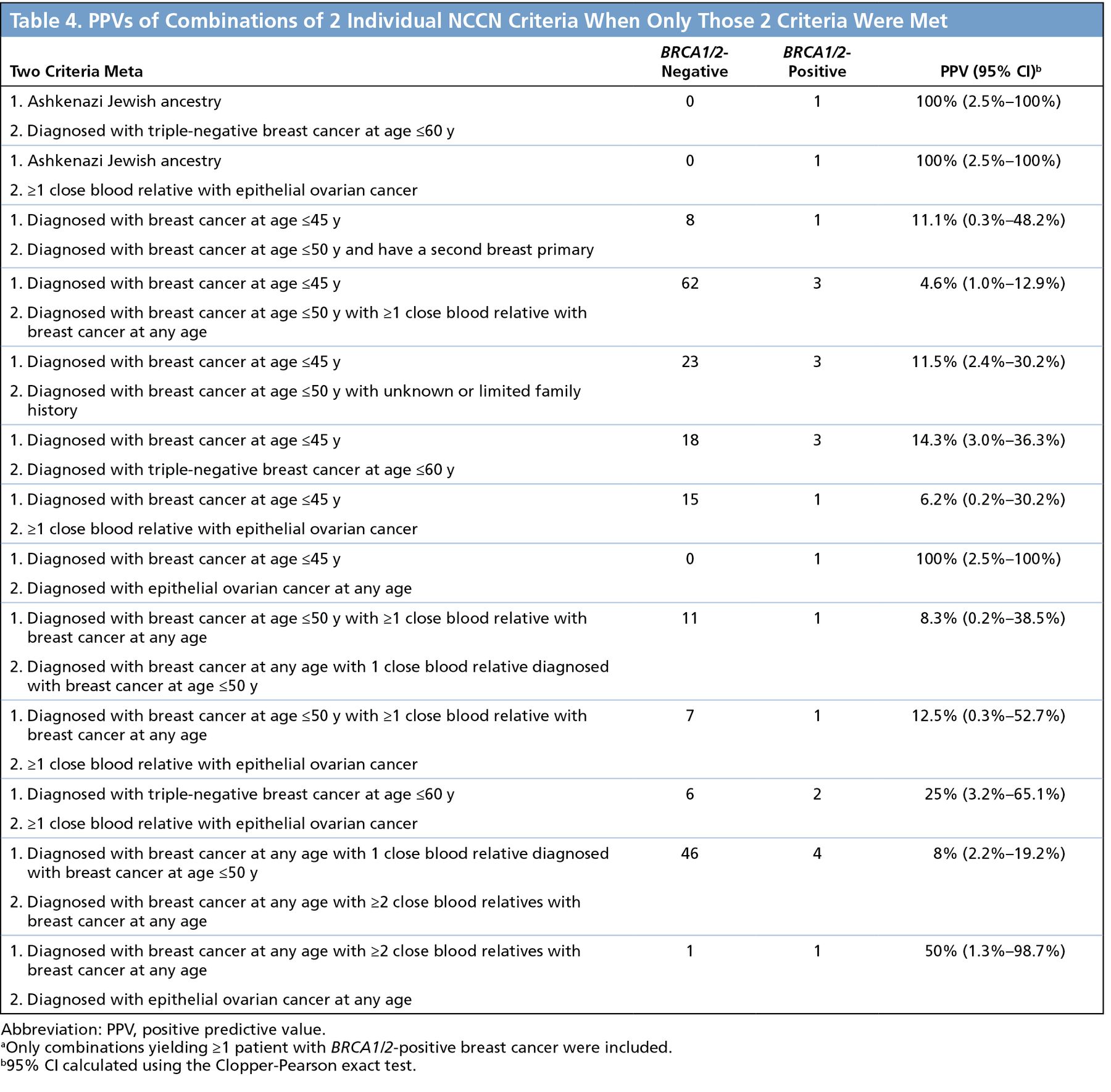 genes were also detected in the study population, a hereditary breast cancer panel genetic test could be the appropriate test to offer. Inclusion of moderate penetrance breast cancer genes could also be considered; although this would certainly lead to an overall increase in the number of mutations identified, it should also be acknowledged that significant questions regarding clinical utility remain to be answered.14 Further studies are needed to determine the utility, yield, and feasibility of universal hereditary breast cancer genetic testing for patients with breast cancer.

Several limitations to the current study should be considered. This was a single-institution study, and therefore further studies examining other populations are warranted. The NCCN criteria have been revised since the study was conducted; however, because all of the criteria analyzed here are still in effect and only minor changes to the criteria for patients with breast cancer were made, our study results should still generally apply to the current criteria. The study population comprised patients with breast cancer referred for genetic counseling, and thus may be biased toward a higher likelihood of detecting BRCA1/2 mutations compared with an unselected sample. However, this would tend to bias the results toward a higher yield of BRCA1/2 mutations; the fact that the mutation yields were still relatively low actually strengthens our result. The intent of our study was to evaluate the NCCN criteria as they pertain to patients with breast cancer, and therefore the findings are not generalizable to individuals without a personal diagnosis of breast cancer. There were several criteria for which it was rare to be the sole criterion met, which limited our ability to assess the PPV of those individual criteria. As is often the case in patient-reported family history, reports of ambiguous or unknown types of cancer could not be clarified. Pathology was not verified beyond that of the patients' cancers. However, because the NCCN Guidelines are intended for clinical use, we feel that this information is realistically representative of the typical level of information that would be available in a cancer genetics consultation. Although most patients underwent BRCA1/2 full sequencing and rearrangement analysis, 134 patients did not. Given that this represents only 12.5% of the study population and that at least 90% of mutations still would have been detected via the testing method used, this is unlikely to significantly impact the study findings.

Patients with breast cancer meeting more than 1 NCCN criterion constitute a population significantly enriched for BRCA1/2 mutations, whereas those meeting only 1 criterion test positive at a rate similar to unselected patients. These data will help healthcare providers in pretest risk assessment and genetic counseling, and will inform ongoing discussions of how to best implement BRCA1/2 genetic testing.