Although professional guidelines have recommended trastuzumab for stage I–III breast cancer since 2005, data on its use in clinical practice are very limited. This is especially true for women aged <65 years due to lack of sufficiently comprehensive, linked data sources that include this population. Of the 231,840 women diagnosed with invasive breast cancer each year, >133,000 are aged <65 years.5,6 Compared with older patients, these younger patients have a higher percentage of HER2-positive cancers (20% vs 13% for age <65 years and >65 years, respectively)7 and often have more aggressive tumors that require adjuvant chemotherapy.8,9 Thus, it is particularly important to assess the dissemination of trastuzumab treatment in this young population. We evaluated temporal trends and clinical and sociodemographic factors associated with trastuzumab initiation among women with breast cancer aged <64 years.

We linked data between cancer registries from 5 states (California, Georgia, Kentucky, New York, and Ohio) and administrative claims consisting of medical and pharmacy records for members enrolled in Anthem-affiliated plans maintained by Health-Core (Wilmington, DE), an independently operated, wholly owned subsidiary of Anthem. Anthem is an independent licensee of Blue Cross Blue Shield Association and serves members in 14 states. We obtained HER2 status from the cancer registry data. Each cancer registry started collecting HER2 statuses in 2005 for California, 2008 for Kentucky, and 2009 for New York, Ohio, and Georgia. More details of the data linkage can be found in previous publications.10

We first identified incident invasive breast cancer diagnosed from January 1, 2006, through December 31, 2011 (N=13,398) and followed through April 30, 2012 (Figure 1). We then excluded patients diagnosed with stage IV breast cancer or missing stage information (n= 843), and those with negative (n=5,072), borderline (n=142), or unknown (n=6,258) HER2 status, which was mostly due to lack of registry reporting of HER2 status in earlier years. We also excluded women who did not have any medical coverage during the first 9 months after diagnosis (n=111). We excluded 38 more women who were aged 64 years at the time of diagnosis because HealthCore claims data do not include complete information on drug use when women become eligible for Medicare at age 65 years. The final study population included 934 women aged <64 years when diagnosed with AJCC-defined stage I–III HER2-positive breast cancer.11 A total of 778 (83.3%) of the women had continuous coverage during the first 9 months after diagnosis; most of the 156 women without continuous coverage had ≥6 months of coverage after their breast cancer diagnosis.

The outcome of the study was receipt of trastuzumab as adjuvant therapy for stage I–III HER2-positive breast cancer, defined as initiation of trastuzumab within the first 9 months after diagnosis. We chose this 9-month cutoff to balance the time patients may need to complete surgery and/or adjuvant chemotherapy before initiating trastuzumab, and to avoid

including patients who may have experienced disease progression and are receiving trastuzumab for metastatic disease. From registry data, we obtained patients' sociodemographic factors (age at diagnosis, race/ethnicity, marital status, and state of residence) and cancer-related characteristics, including nodal status; AJCC stage; estrogen receptor (ER), progesterone receptor (PR), and HER2 status; tumor size; histologic grade; and history of cancer before breast cancer diagnosis. Information on TNM staging was obtained from registry data using the AJCC Breast Cancer Staging (version 6 or 7, depending on year of diagnosis).11 Based on NCCN Guidelines and tumor size information available in our dataset, we defined women as high risk (for recurrence) if they had either positive lymph nodes or a tumor >2 cm (T2–T4).3,4 Because of lack of specific tumor size information in our data, we were unable to determine which patients had node-negative disease and tumors 1 to 2 cm and would also have been eligible for trastuzumab. From the claims data maintained by HealthCore, we obtained patients' median household income and percentage of college education completion derived from census tract data based on their residential address. Using longitudinal medical records available in the claims data, we assessed the presence of 30 comorbidities included in the Elixhauser comorbidity index score12 the year before breast cancer diagnosis. We grouped those 30 comorbidities into cardiovascular (congestive heart failure, hypertension, peripheral vascular disorders, and diabetes) or other comorbidities.

We first described the characteristics of patients with HER2-positive breast cancer and their use of trastuzumab in the total population. We then conducted a logistic regression with trastuzumab use as the dependent variable to identify patient demographic and clinical characteristics associated with trastuzumab use in the total population. Variable selection was based on expert opinions and consideration of the model fitting process. For example, we adjusted for regional (state-level) differences in practice patterns and first year of HER2 status reporting. We combined prior cardiovascular history with other comorbidities due to small sample size in separate categories and very similar estimates with trastuzumab use. Third, we calculated predicted probability of new trastuzumab users within the first 9 months of their breast cancer diagnosis by calendar year to examine the temporal trend of trastuzumab initiation by nodal status and clinical indication. We also conducted a sensitivity analysis among women who had continuous coverage in the first 9 months after breast cancer diagnosis.

Population Characteristics and Their Trastuzumab Use

Table 1 describes the demographic and clinical characteristics of our study cohort. Most patients were aged 40 to 59 years (72%) and were non-Hispanic white (76%). Most women had tumors that were ≤2 cm (53%), node-negative (61%), either ER- and/or PR-positive (68%), and of poorly or undifferentiated histologic grade (56%).

Temporal Trends of Trastuzumab Use

Patient Characteristics Associated With Trastuzumab Use

initiation were those that would be predicted based on practice guidelines during our study period and include node-positive status, high histologic grade, hormone receptor–negative disease, or larger tumors. Thus, our study effectively demonstrates the dissemination of adjuvant trastuzumab for HER2-positive stage I–III breast cancer among patients at the highest risk of breast cancer recurrence and mortality.

Two prior studies using the SEER-Medicare linked database demonstrated significant age and racial disparities in trastuzumab initiation among women aged ≥65 years with early-stage HER2-positive breast cancer in 2010 to 2011.15,16 One study reported that 50% of 1,162 white and 40% of 104 black women aged ≥65 years with HER2-positive early-stage breast cancer received adjuvant trastuzumab. Additionally, they found that black women were 25% less likely to start trastuzumab than white women even after adjusting for other sociodemographic and cancer-related characteristics. In another study of 770 women aged ≥66 years without a history of congestive heart failure, 56% of eligible women received trastuzumab, but non-Hispanic black women were 3-fold more likely to not receive trastuzumab than non-Hispanic white women (aOR, 3.14; 95% CI, 1.38–7.17). In contrast to these 2 prior studies, our study population, all diagnosed at ≤64 years of age, was more likely to have aggressive disease features. Freedman et al17 assessed receipt of trastuzumab by race/ethnicity among 1,190 women, 74% of whom were <60 years of age, receiving care from 8 medical centers. They found no significant differences by race/ethnicity in trastuzumab initiation. The lack of racial disparities in trastuzumab initiation in our

Predictors of Herceptin Use

study may be partially due to some clinical factors in women aged <64 years that lead patients and providers to consider trastuzumab necessary, such as longer life expectancy and increased presence of higher-risk features for cancer recurrence. It is also possible that our small sample size of nonwhite women limited our power to detect any differences.

The temporal trends we observed are likely due to evolving evidence and practice guidelines that called for treating more subsets of women with stage I–III breast cancer, such as women with node-negative disease with tumors >1 cm beginning in 2006, and women with tumor size ≤1 cm but with high histologic grade (2 or 3) in 2010. Among 336 patients in our study with node-negative, grade 2 or 3 tumors that were ≤2 cm in size, trastuzumab initiation steadily increased from 49% in 2006 to 78% in 2011. This increase reflects practitioners' adherence to clinical recommendations for trastuzumab initiation in this young population.

Dissemination of adjuvant trastuzumab was not perfect or universal. Our cohort consisted of 19% of women with higher-risk features who did not receive adjuvant trastuzumab. This may be partly due to age effects; our data showed that women aged 60 to 63 years accounted for 21% and 12% of the total cohort in the nontrastuzumab and trastuzumab groups, respectively. We investigated the possibility that comorbidity might help explain this result, because some studies have reported an association between trastuzumab initiation and an increased risk of heart failure.18 However, we did not observe that cardiovascular comorbidity was associated with decreased trastuzumab initiation among the 19% of patients with high-risk features of recurrence. This finding may also be partly due to the low prevalence (5%) of cardiovascular comorbidity in our study population.

This study is important in that it is among the first to report use patterns of trastuzumab initiation among patients <64 years diagnosed with stage I–III breast cancer. The study findings were limited to patients with commercial insurance. Because trastuzumab costs approximately $70,000 USD for 1 year of treatment,19,20 out-of-pocket costs for women without any insurance pose serious financial barriers to its initiation. Subsequent studies comparing initiation of this targeted therapy in women with commercial versus public coverage would be desirable. Additionally, due to lack of exact tumor size data, we were unable to distinguish patients recommended for trastuzumab initiation (tumor size >1 cm, or tumors 0.6–1 cm graded as 2 or 3) from all patients with tumor size ≤2 cm. Therefore, we used conservative criteria and only counted patients diagnosed with tumors >2 cm as having high-risk features because these patients clearly met clinical recommendations for trastuzumab initiation. The time trend analyses are limited by the distinct time contribution and small sample size in most registries, except California. Because of the lack of data, this study is unable to assess the effect of different drivers on the initiation of trastuzumab, such as insurance type and patient and physician preferences.

Trastuzumab treatment is well disseminated among patients <64 years of age with stage I–III HER2-positive breast cancer. Our data did not find racial disparities in trastuzumab initiation, as reported in prior studies of women aged ≥65 years. This study found overall excellent adherence to professional recommendations regarding adjuvant trastuzumab initiation in clinical practice for women diagnosed at <64 years of age at high risk of recurrence after initial treatment for stages I–III, HER2-positive breast cancer.

Dr. Isaacs has received honoraria from Genentech/Roche, Celgene, AstraZeneca, and Pfizer; served in a consulting or advisory role for Pfizer, Caris Life Sciences, and Genentech/Roche; served on speakers' bureaus for Genentech, Celgene, Pfizer, and AstraZeneca; received research funding from Novartis, Pfizer, Genentech, and Tesaro; and has accepted travel, accommodations, and expenses provided by Caris Life Sciences. Drs. Liu and Selvam are employees of HealthCore, Inc., a wholly owned subsidiary of Anthem, Inc. The remaining authors have disclosed that they have no financial interests, arrangements, affiliations, or commercial interests with the manufacturers of any products discussed in this article or their competitors. 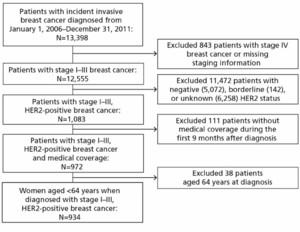 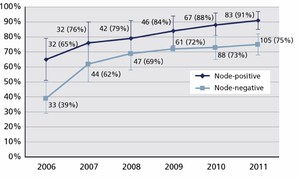 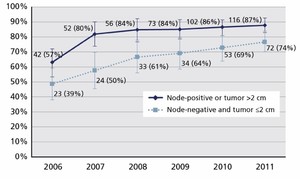