The Call of “The Wild”-Type GIST: It's Time for Domestication

Gastrointestinal stromal tumor (GIST) research set the precedent for precision medicine in solid tumors by identifying oncogenic driver mutations in the KIT gene1 and matching this target with a cognate compound (ie, STI-571; later named imatinib), which inhibits the KIT oncoprotein.2 Many clinicians and scientists thought the disease was cured. However, the story was not complete. A few years later, we learned that GISTs could also be caused by PDGFRA mutations.3 Before next-generation sequencing, this was determined by single-gene polymerase chain reaction studies, leaving all non–KIT/PDGFRA-mutated GISTs to be called wild type (WT). The Oxford English Dictionary defines “wild-type” as “the gene or characteristic (ie, phenotype) that prevails among individuals in natural conditions, as opposed to an atypical mutant type.”4 In other words, the normal phenotype. However, non–KIT/PDGFRA-mutant GISTs, or so-called WT GISTs, are not the standard. We have evolved so that cancer is not the rule, but the exception.

As time passed, we have learned that GIST is also caused by mutations in KRAS, NRAS, HRAS, BRAF, NF1, SDHA, SDHB, SDHC, and SDHD, as well as epigenetic loss of the SDH complex.5 Thus, WT GISTs do have mutations and/or epimutations. Unfortunately, the name “WT” persists. Patients and experts in the field alike have continued to perpetuate the term, except the nomenclature has become even more complicated. In order to account for the 9 aforementioned genes, a spin-off definition arose for what came to be called “quadruple WT” GIST.6 The original definition referred to GISTs lacking cancer-causing alterations in KIT, PDGFRA, the RAS-pathway (K/N/H-RAS, BRAF, NF1), or SDH subunits (SDH A/B/C/D). Recently, it was reported that KIT/PDGFRA/RAS/BRAF/SDH-intact tumors were “quadruple WT,” leaving out NF1.7 The authors then concluded that NF1 mutations were frequent in patients lacking mutations in the other genes.

Most recently, we and others have reported ETV6-NTRK3 gene fusions in GISTs in the absence of activating or inactivating genomic alterations in any of the aforementioned genes.8,9 We also added FGFR1 mutations and kinase fusions to the list of causative genes.8 If we count each RAS oncogene separately, we are now up to 13 GIST subtypes; other putative drivers include ARID1A,8 ARID1B,5 ATR,8 LTK,8 PARK2,8 SUFU,8 and ZNF2173.8,10 With these genes in mind, perhaps there are at least 20 GIST subtypes. In fact, there are still some tumors with mutations/epimutations that remain to be discovered. Thus, the GIST research community has begun to tame these “quadruple WT” tumors by adding 9 more genes to the list of putative drivers.

Despite the aforementioned progress, clinicians, scientists, and patients continue to call these tumors “WT,” with additional subcategorization by SDHB protein expression. However, it is becoming clearer that none of these are WT, and continuing to call them this is a misnomer. It pays no homage to the genetic diversity of GIST, nor is it molecularly accurate. These tumors do have mutations/epimutations, and phenotypically, these patients do have a cancer. Thus, they and their tumors are not WT.11 We have now begun to domesticate these WT GISTs, and we need to be clear and accurate in our terminology because there are associated treatment implications. Unless there is normal SDHB protein expression and a lack of alterations on whole-genome (ie, mutation analysis), whole-genome bisulfite (ie, methylation analysis), 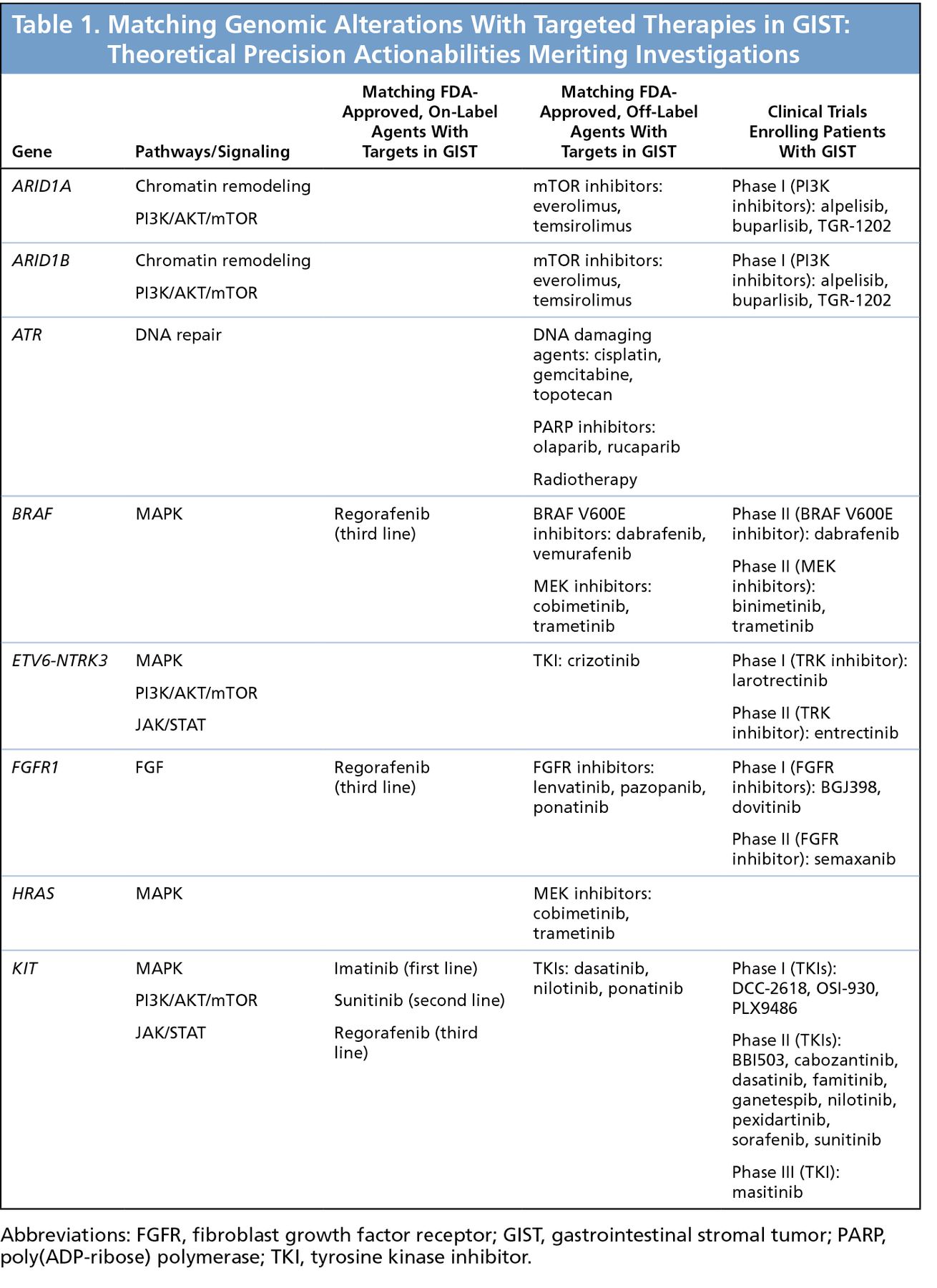 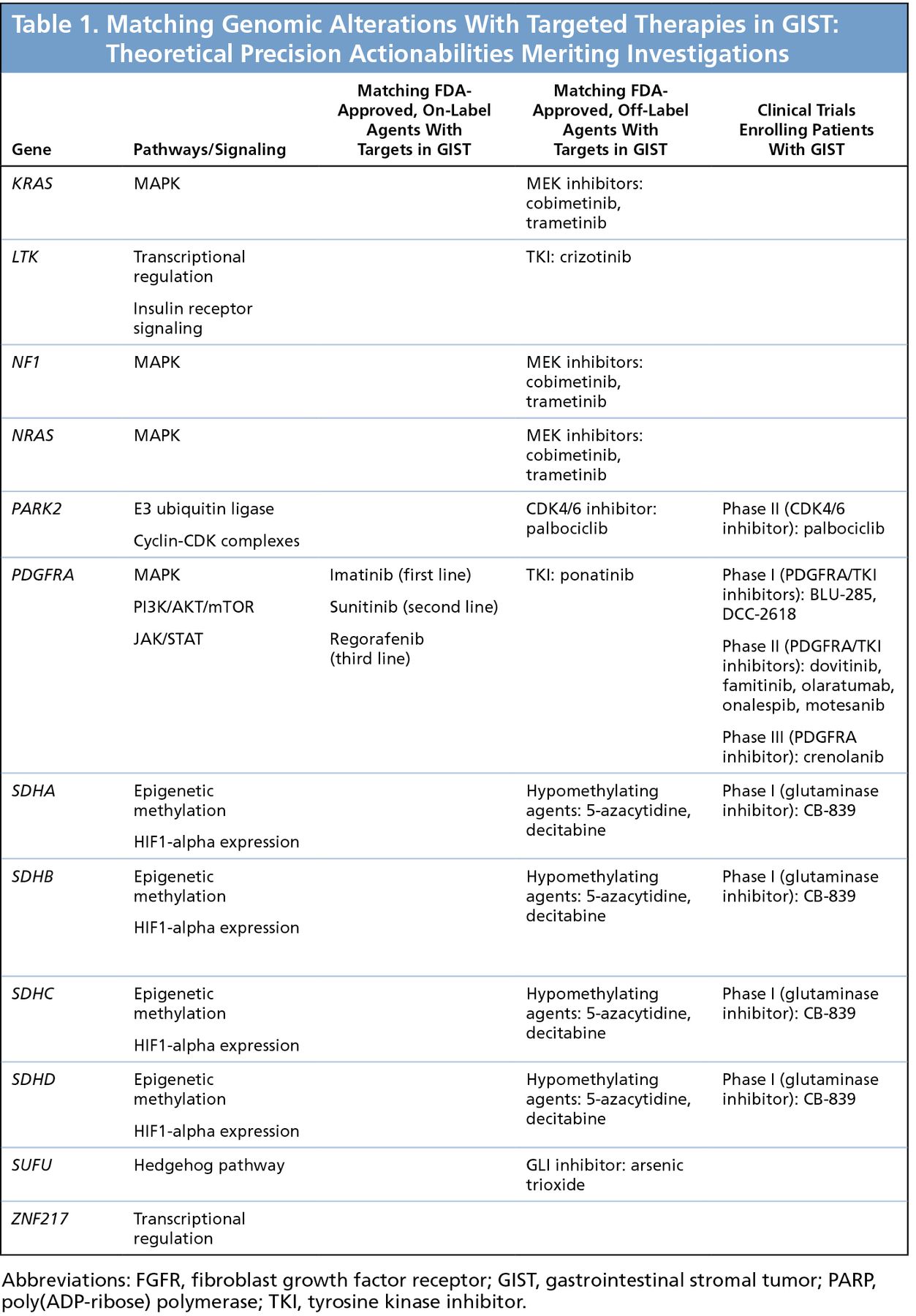 and RNA sequencing (ie, RNA expression analysis), these tumors are not WT. Their driver genes and genomic alterations are just yet to be determined.

Because KIT and PDGFRA mutant tumors constitute the majority of GIST, the remaining 20 genetic subtypes constitute the minority. We call to abandon the term “WT” and propose “unclassified” GIST as a name for any unknown GIST subtypes. In cases where the mutation is undetermined, we should denote them by their SDHB immunostaining and the GIST driver genes, which lack alterations. For example, an SDHB-competent case without mutations discovered on the Oregon Health & Science University GeneTrails GIST Genotyping Panel (ie, AKT1, AKT2, AKT3, ATM, BRAF, CDKN2A, HRAS, KIT, KRAS, MAP2K1, NF1, NRAS, PDGFRA, PIK3CA, PTEN, PTPN11, SDHA, SDHAF1, SDHAF2, SDHB, SDHC, SDHD, and TP53) would still need to be qualified as an “unclassified” GIST, because several aforementioned genes or kinase fusions are not included in this panel.8 Clarity in name and description of genomic alterations are critical to moving this field forward. This may have clinical implications for more precisely designing clinical trials and crafting personalized treatment regimens with FDA-approved and/or experimental agents (Table 1). Based on the genomic alterations, theoretical precision actionabilities may be assigned and potentially nonefficacious therapies may be avoided.

In conclusion, emerging work has provided increasing insights into the pathobiology of GIST subtypes. We are increasingly stratifying GISTs into distinct groups based on tumor genomics, and these do have clear clinical implications. By cultivating new nomenclature and taming terms like “WT” GISTs, we will continue to encourage investigations into the pathobiology of this disease and to identify novel drivers and/or therapeutic targets within these tumors. In turn, this new knowledge may inform the implementation of precision and personalized oncology approaches for treating patients with non–KIT/PDGFRA-mutant GIST.