The incidence and mortality of hepatocellular carcinoma (HCC) have increased 2-fold during the past 2 decades, and it is currently the fastest growing cause of cancer-related death in the United States.1 The 5-year survival rate for HCC remains below 20% in the United States.2 Poor HCC outcomes are largely attributed to low rates of HCC surveillance and high rates of late stage diagnosis.3,4

Accurate HCC staging is important for patient prognostication, treatment delivery, and standardization of inclusion criteria for patients enrolled in clinical trials. Although there is no universally accepted staging system, the Barcelona Clinic Liver Cancer (BCLC) staging system has been adopted by both the American Association for the Study of Liver Diseases (AASLD) and the European Association for the Study of the Liver.5,6 The BCLC classification stratifies patients according to tumor stage, liver function, and ECOG performance status (PS) into 4 categories (0 and A, early; B, intermediate; C, advanced; D, end-stage).7,8 The BCLC classification has been externally validated in Western and Asian populations and demonstrates superior prognostic discrimination compared with other HCC staging systems.9,10

Although prognosis and treatment are fairly uniform at the ends of the BCLC classification (BCLC stages A and D), heterogeneity exists within BCLC stages B and C due to variable tumor characteristics and degrees of liver dysfunction.11,12 In addition, median survival for patients with BCLC stage C HCC ranges from 3 to 10 months, further underscoring the nonhomogenous nature of this group.10–14 In the era of precision medicine, this large variability in survival can serve as a source of consternation for patients with newly diagnosed HCC. However, in the absence of routine biopsies for HCC, we are forced to depend on readily available clinical characteristics for improved prognostication.

This study explored whether patients with BCLC stage C HCC could be further stratified by tumor characteristics to improve HCC prognostication and facilitate appropriate treatment decisions.

Using a prospectively maintained database of patients with HCC seen at Parkland Health & Hospital System (PHHS) and the University of Texas Southwestern (UTSW) Medical Center, we identified patients diagnosed with BCLC stage C HCC between January 2005 and June 2015. PHHS is an integrated safety-net health system and UTSW is an NCI-designated tertiary care referral center. One multidisciplinary team attends to the care of patients with HCC at both institutions, as described elsewhere.15

The diagnosis of HCC was based on AASLD criteria,5 and all cases were adjudicated by one of two authors (A.G.S. or A.C.Y.). Patients were classified as BCLC stage C based on the presence of vascular invasion or metastasis, including spread to lymph nodes and/or distant organs. Vascular invasion was distinguished from bland thrombus by the presence of arterial enhancement, portal venous expansion, or development of new thrombus directly contiguous with the tumor. Metastatic lymph nodes were diagnosed by histologic confirmation or, predominantly, by radiographic evidence of enlarged nodes (>1.5 cm) outside of the periportal region, enlarged nodes (>3 cm) within the periportal region, or enlarging lymph nodes on serial imaging. Metastases to distant organs was diagnosed by histologic confirmation in most cases but could also be diagnosed by radiographic evidence of an enhancing mass >1.0 cm in distant organs. Patients with Child-Pugh class C cirrhosis or ECOG PS >2 were classified as BCLC stage D and excluded from this study. This study was approved by the Institutional Review Boards at both institutions. 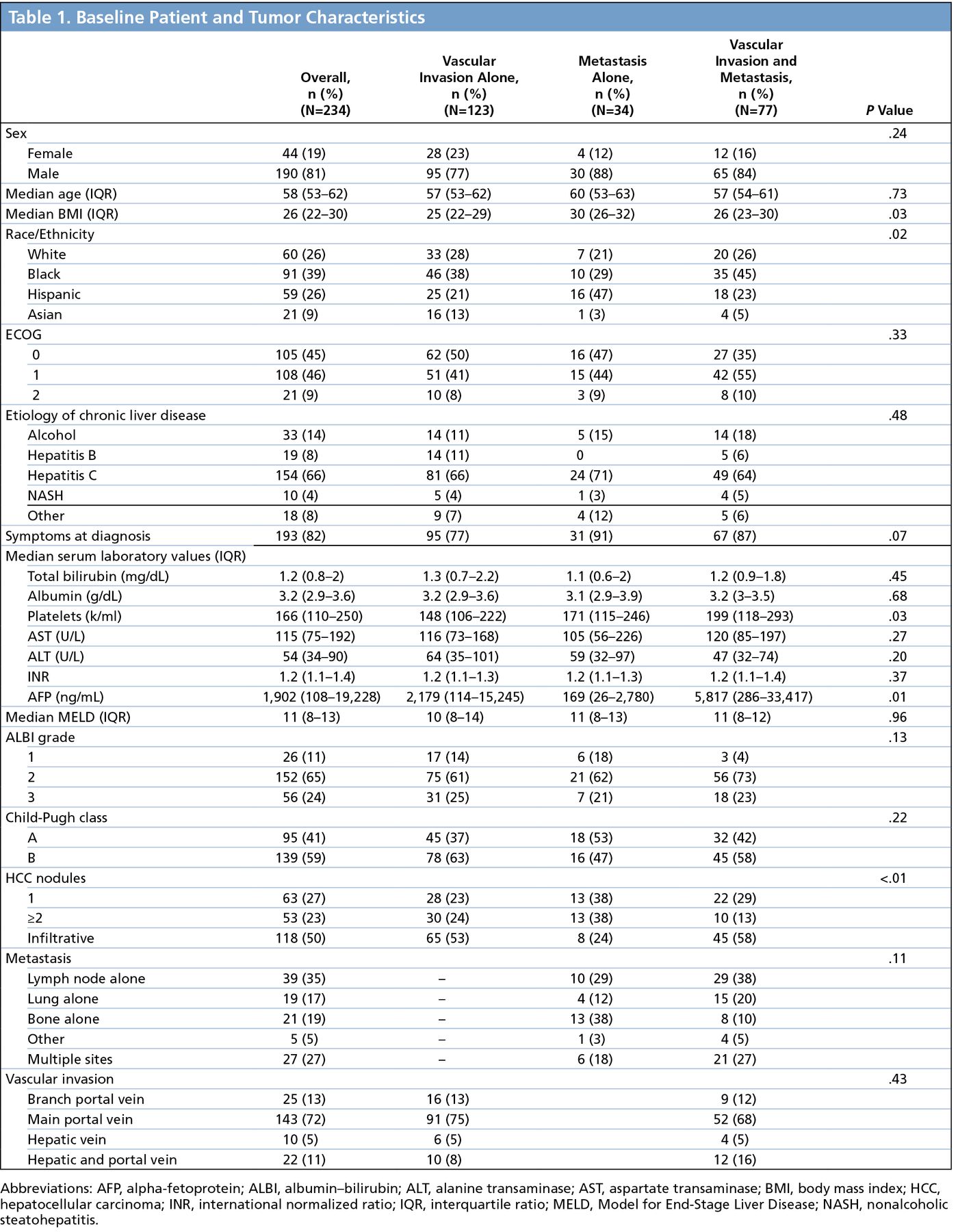 (ECOG PS, Child-Pugh class, and treatment) and those with P≤.2 on univariate Wald test were evaluated in the multivariable model. The final model was constructed using a forward selection procedure. The proportional hazard assumption was evaluated and deemed reasonable based on graphic examination of scaled Schoenfeld residuals. We performed subgroup analyses to evaluate survival by site of metastasis and degree of vascular invasion. All tests were 2-sided and performed at a 5% significance level. Statistical analysis was performed using STATA 14 (StataCorp LP, College Station, TX).

Receipt of any treatment did not significantly differ among the 3 groups (P=.18) (Table 2). Reasons for no treatment included clinical deterioration before initiating treatment (31%), poor liver function (29%), and patient refusal (12%). Treatment with sorafenib was the most common treatment, ranging between 30% and 39% (P=.60). In each group, 10% to 15% of patients received locoregional therapy, namely TACE, yttrium-90 (90Y) radioembolization (TARE), or stereotactic body radiation therapy. These therapies were offered more commonly to patients with vascular invasion alone or metastasis alone than to patients with vascular invasion and metastasis (14% and 15% vs 0%, respectively; P<.01). Patients with branch portal venous thrombus were more likely than those with main portal venous thrombus to receive either TACE or TARE (16% vs 5%; P=.04).

During a median follow-up of 3.0 months (average, 5.2 months), a total of 203 patients (87%) died. Overall median survival was 3.7 months and survival rates at 6, 12, and 24 months were 32%, 12%, and 5%, respectively. Patients with both vascular invasion and metastasis had worse survival than those with vascular invasion alone and metastasis alone (median survival, 3.0 vs 3.9 and 5.7 months, respectively; P<.01; Figure 1). Table 3 details median OS according to Child-Pugh class. On multivariable 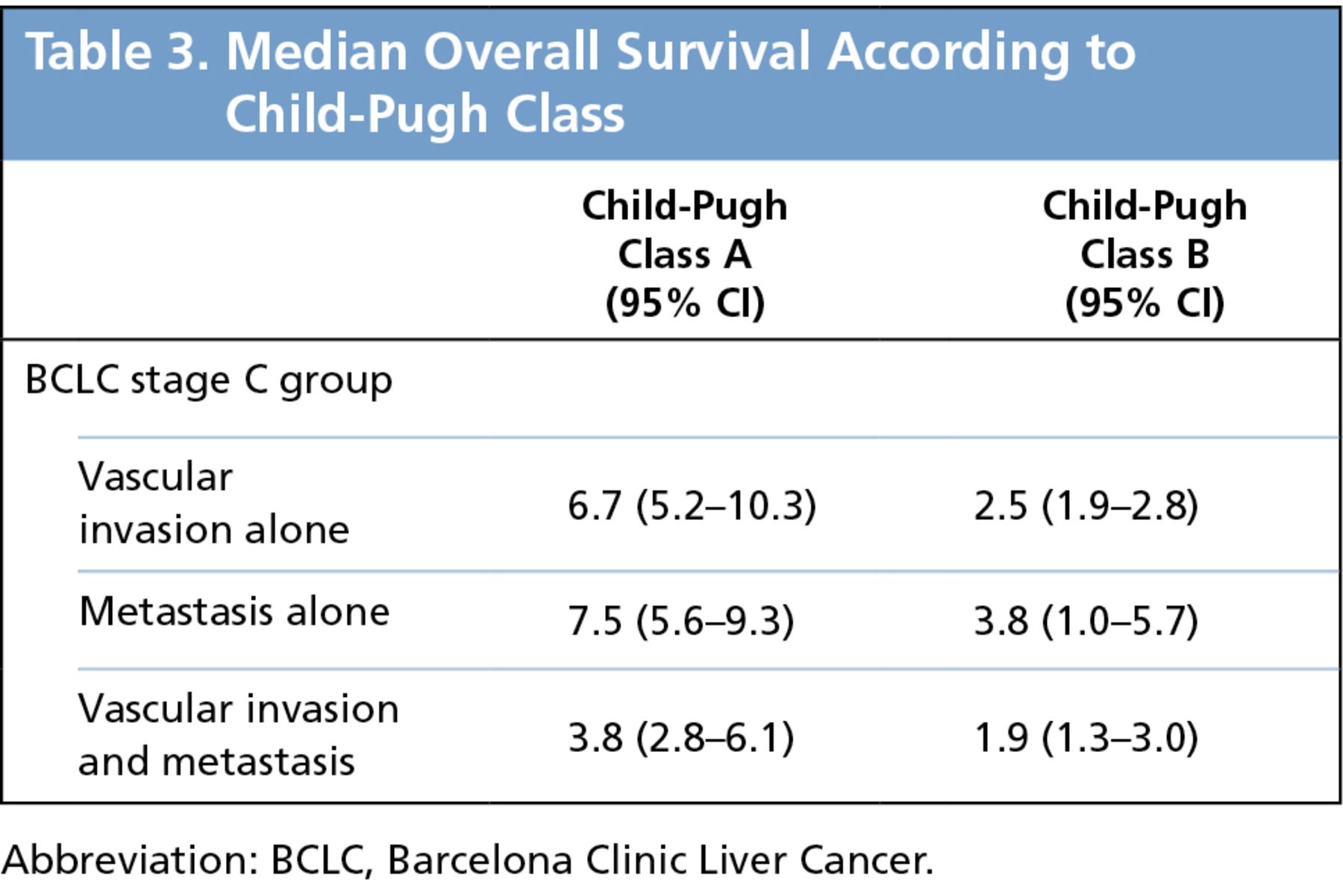 Our findings and data from other studies similarly observed a more favorable prognosis when tumoral involvement was limited to small caliber downstream branches of the portal system.19–22 In addition to having a better prognosis, select patients with branch tumor thrombus may be successfully treated with curative therapies, such as surgical resection, or locoregional therapies, such as TACE or TARE.14,23,24 It is becoming increasingly clear that all patients with vascular invasion do not constitute a homogenous group, and that treatment decisions should be tailored based on the degree of vascular involvement.

In contrast, we did not find any differences in survival according to site of metastasis. After accounting for liver function and intrahepatic tumor characteristics, differences in survival dissipated. Although some studies have reported improved survival in patients with metastasis to lymph nodes compared with distant organs,19,25 several other cohorts, including those in our study, did not demonstrate a difference.26 Our finding conforms to the notion that prognosis in patients with metastatic HCC is largely driven by the intrahepatic lesion characteristics 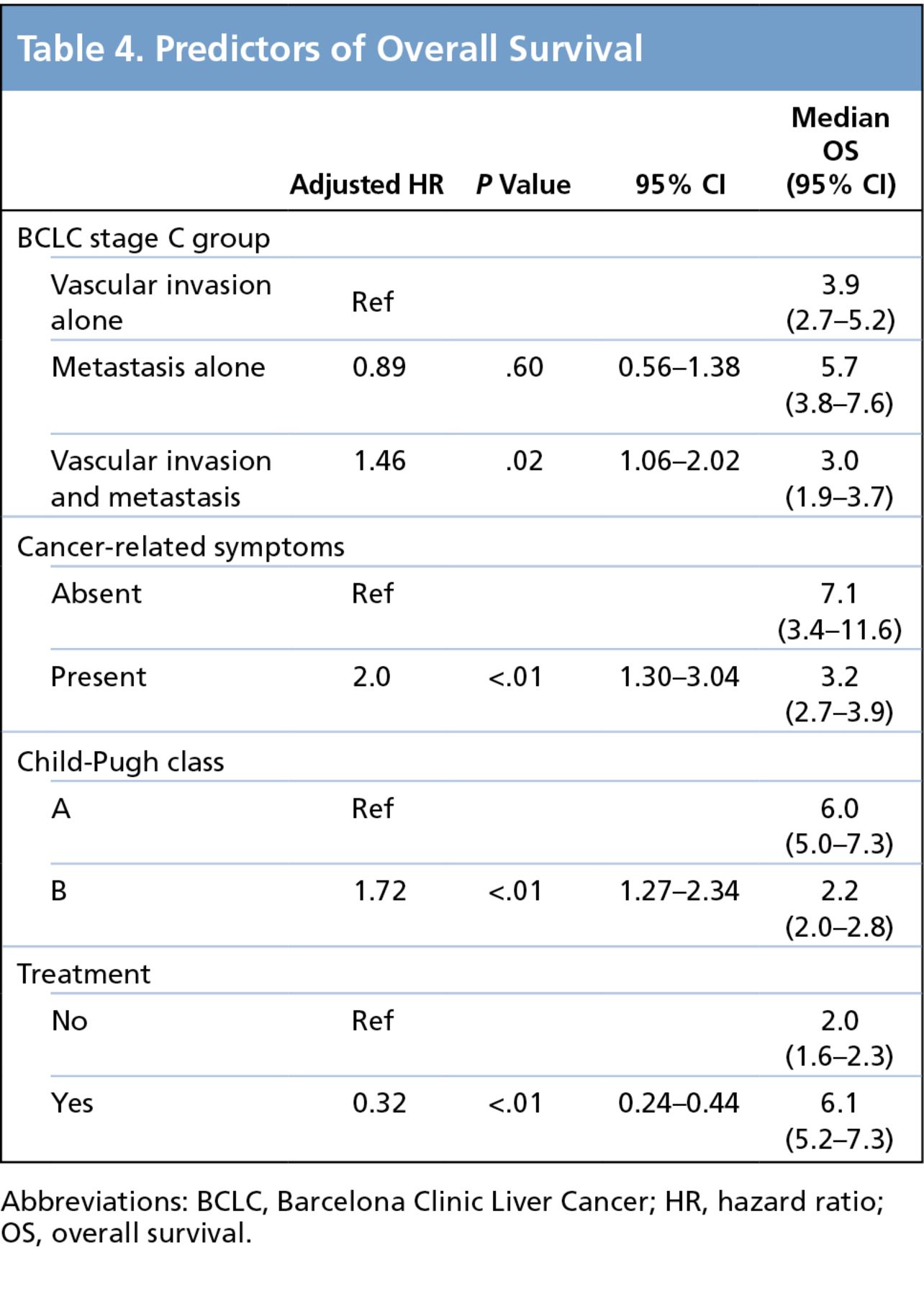 and liver function, with most patients with metastatic HCC dying of progression of intrahepatic disease and/or liver failure.27–30 This finding has important ramifications for treatment, because current guidelines recommend systemic therapy including sorafenib for metastatic disease. Locoregional treatment of the intrahepatic tumor burden combined with systemic therapy may be more efficacious. This more aggressive approach has been advocated by the Hong Kong Liver Cancer (HKLC) staging system in patients primarily with hepatitis B virus (HBV)–related HCC.21 The HKLC system, however, has not been validated in patients with non–HBV-related HCC. Furthermore, more aggressive locoregional therapies, including TACE or TARE, have not been compared with sorafenib alone or in conjunction with sorafenib in patients with BCLC stage C HCC. Currently, multiple clinical trials are underway comparing locoregional therapies including TARE with sorafenib in the treatment of patients with BCLC stage C HCC with malignant venous thrombus and without evidence of extrahepatic disease (ClinicalTrials.gov identifiers: NCT01482442 and NCT00712790). The results of these trials will allow further delineation of appropriate treatments for BCLC stage C HCC based on more discriminatory clinicopathologic factors instead of a “one size fits all” treatment approach.

Finally, we found that patients with a combination of vascular invasion and metastasis had significantly worse survival than those with either vascular invasion or metastasis alone. A similar finding was noted in an Asian cohort in which patients with main portal vein invasion and distant metastasis had worse survival compared with patients with either tumor characteristic alone (2.3 vs 4.9–5.7 months).19 The extremely poor prognosis in this subgroup of patients mirrors that of patients with BCLC stage D HCC and raises the question of whether any benefit is derived from locoregional or systemic therapy. Even in the subgroup of patients with Child-Pugh A cirrhosis and ECOG PS of 0 or 1 the median survival was 3.8 months. In the SHARP trial, a subgroup analysis of patients with vascular invasion and/or metastatic disease derived benefit from sorafenib; however, an analysis was not performed among those with both characteristics simulateneously.31 It is possible that these patients may be best treated with best supportive care, because further data are needed to evaluate the effectiveness and cost-effectiveness of therapy in this subgroup.

Notably, OS in this cohort of patients with BCLC stage C HCC was worse than what would have been expected based on findings from the SHARP trial. Still, it is unlikely that OS in this cohort was an outlier. Rather, it represents the reality of prognosis in patients with BCLC stage C HCC in real-life practice outside the “ideal” settings of a clinical trial. Unlike the SHARP trial, nearly 60% of our patients had Child-Pugh class B cirrhosis and 82% were symptomatic at the time of diagnosis.

Findings from this study were interpreted in light of the following limitations. First, unmeasured potential confounders not accounted for in the regression models secondary to the nonrandomized study design may have biased the comparisons of OS. Second, inferences related to OS based on the site of metastasis were prone to type II error (failing to demonstrate a difference when one truly exists) due to a small sample size. Although the goal of our study was to move toward more personalized prognostication for patients with BCLC stage C HCC, our ability to 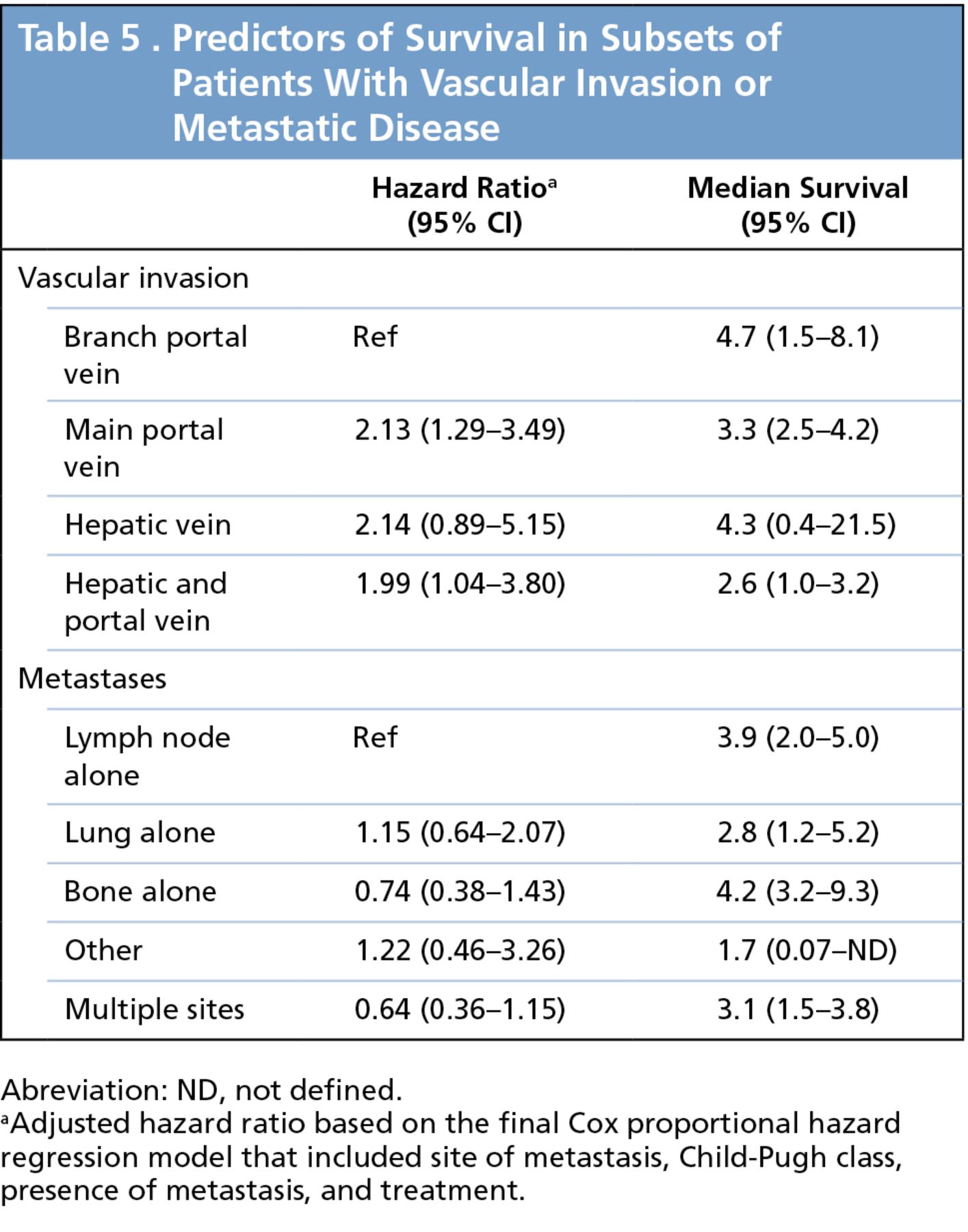 do so is limited by absence of tumor genetic and pathology information given the lack of HCC biopsies in clinical practice. 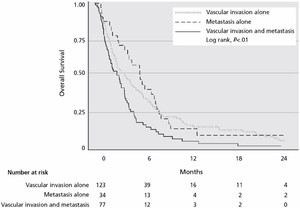 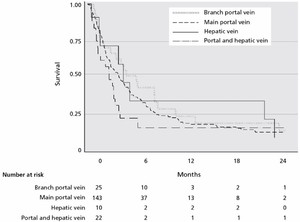