Background: Drug utilization under Medicare Part D varies significantly by geographic region. This study examined the extent to which geographic variation in Part D plan characteristics contributes to the variation in choice of initial endocrine therapy agent among women with incident breast cancer. Methods: Two-stage multivariate regression analyses were applied to the 16,541 women identified from Medicare claims as having incident breast cancer in 2006–2007. The first stage determined the effect of state of residence on the probability of having an aromatase inhibitor (AI), as opposed to tamoxifen, as initial endocrine therapy. The second stage provided estimates of the impact of state-specific Part D plan characteristics on variation in choice of initial therapy. Results: There was substantial residual geographic variation in the likelihood of using an AI as initial endocrine therapy, despite controlling for socioeconomic status, breast cancer treatment, and other factors. Regression-adjusted probabilities of starting an AI ranged from 57.3% in Wyoming to 92.6% in the District of Columbia. Results from the second stage revealed that variation in characteristics of Part D plans across states explained approximately one-third (30%) of the state-level variability in endocrine therapy. A higher number of plans with cost-sharing above the mean, greater spread in deductibles, and a greater spread in monthly drug premiums were associated with lower adjusted state probabilities of initiating an AI. In contrast, a higher number of drug plans with monthly premiums above the state mean and higher mean cost-sharing (in dollars) were both positively associated with likelihood of starting on an AI. Conclusions: Study findings suggest that variation in benefit design of Part D plans accounts for an important share of the large and persisting variability in use of AIs—the preferred oral therapy for breast cancer. 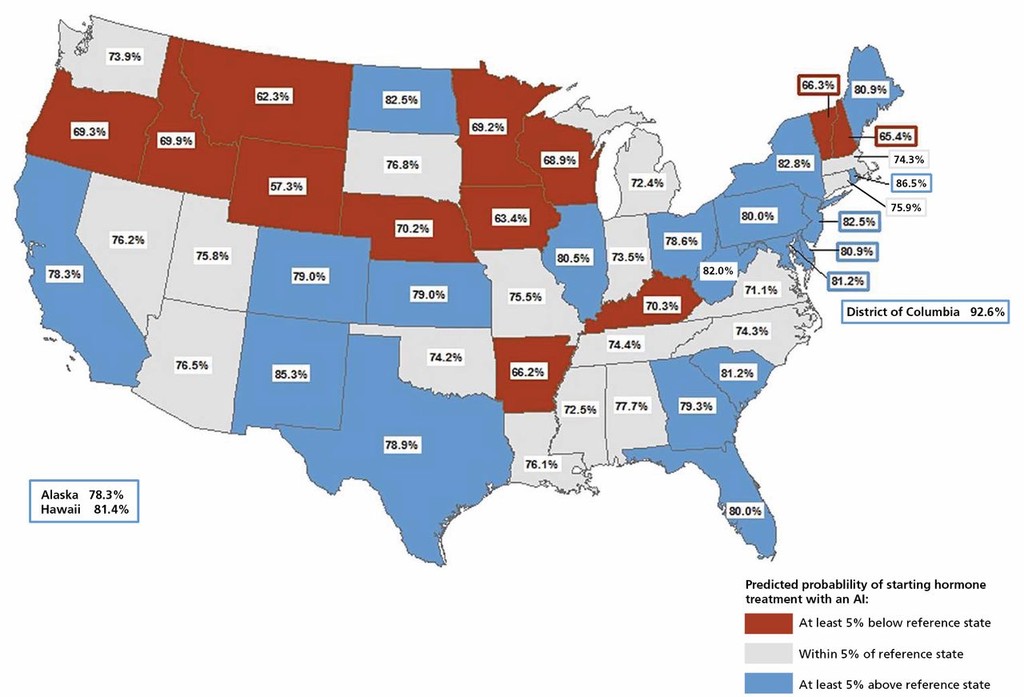 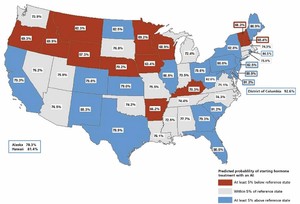