Radiosurgery for Brain Metastases: Changing Practice Patterns and Disparities in the United States

Background: Management of brain metastases typically includes radiotherapy (RT) with conventional fractionation and/or stereotactic radiosurgery (SRS). However, optimal indications and practice patterns for SRS remain unclear. We sought to evaluate national practice patterns for patients with metastatic disease receiving brain RT. Methods: We queried the National Cancer Data Base (NCDB) for patients diagnosed with metastatic non–small cell lung cancer, breast cancer, colorectal cancer, or melanoma from 2004 to 2014 who received upfront brain RT. Patients were divided into SRS and non-SRS cohorts. Patient and facility-level SRS predictors were analyzed with chi-square tests and logistic regression, and uptake trends were approximated with linear regression. Survival by diagnosis year was analyzed with the Kaplan-Meier method. Results: Of 75,953 patients, 12,250 (16.1%) received SRS and 63,703 (83.9%) received non-SRS. From 2004 to 2014, the proportion of patients receiving SRS annually increased (from 9.8% to 25.6%; P<.001), and the proportion of facilities using SRS annually increased (from 31.2% to 50.4%; P<.001). On multivariable analysis, nonwhite race, nonprivate insurance, and residence in lower-income or less-educated regions predicted lower SRS use (P<.05 for each). During the study period, SRS use increased disproportionally among patients with private insurance or who resided in higher-income or higher-educated regions. From 2004 to 2013, 1-year actuarial survival improved from 24.1% to 49.6% for patients selected for SRS and from 21.0% to 26.3% for non-SRS patients (P<.001). Conclusions: This NCDB analysis demonstrates steadily increasing—although modest overall—brain SRS use for patients with metastatic disease in the United States and identifies several progressively widening sociodemographic disparities in the adoption of SRS. Further research is needed to determine the reasons for these worsening disparities and their clinical implications on intracranial control, neurocognitive toxicities, quality of life, and survival for patients with brain metastases. 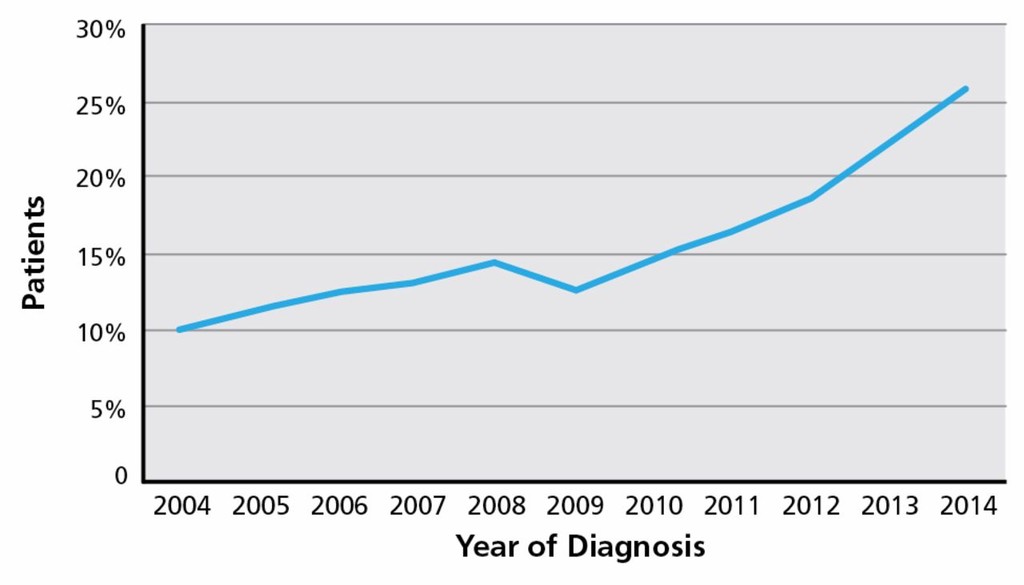 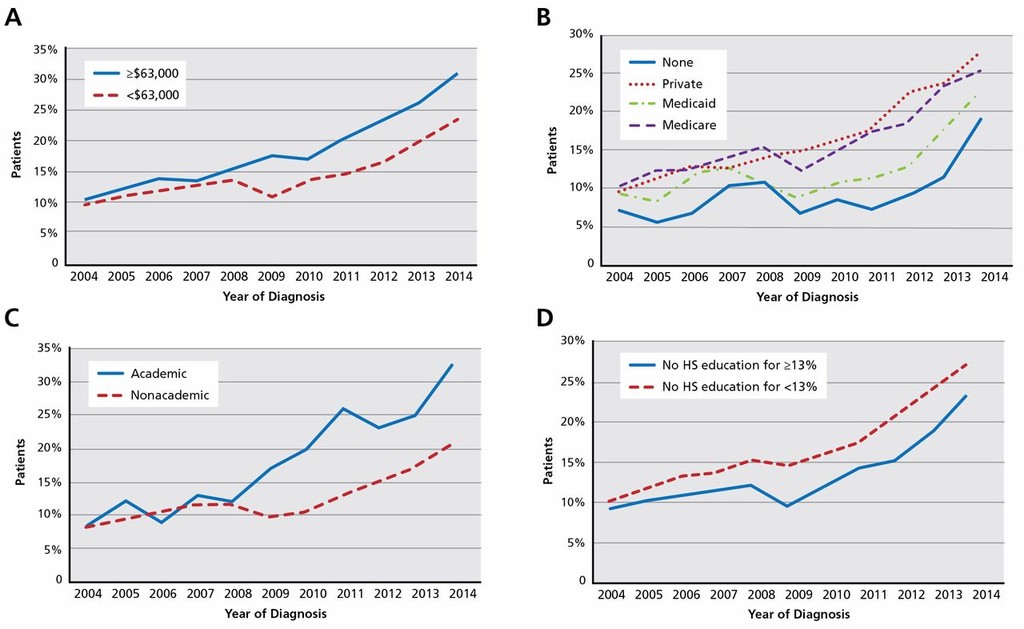 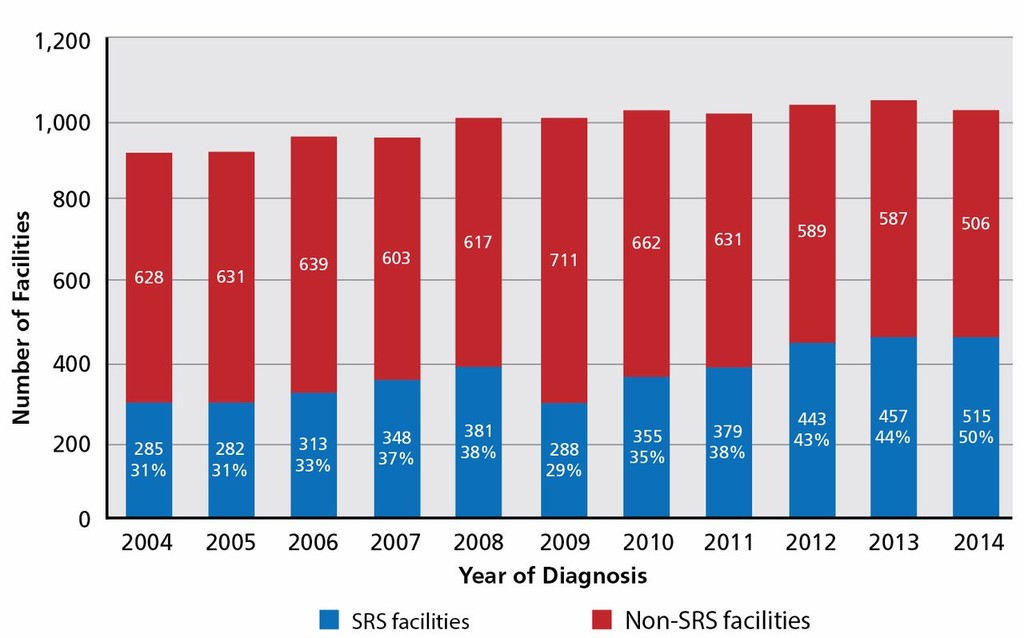 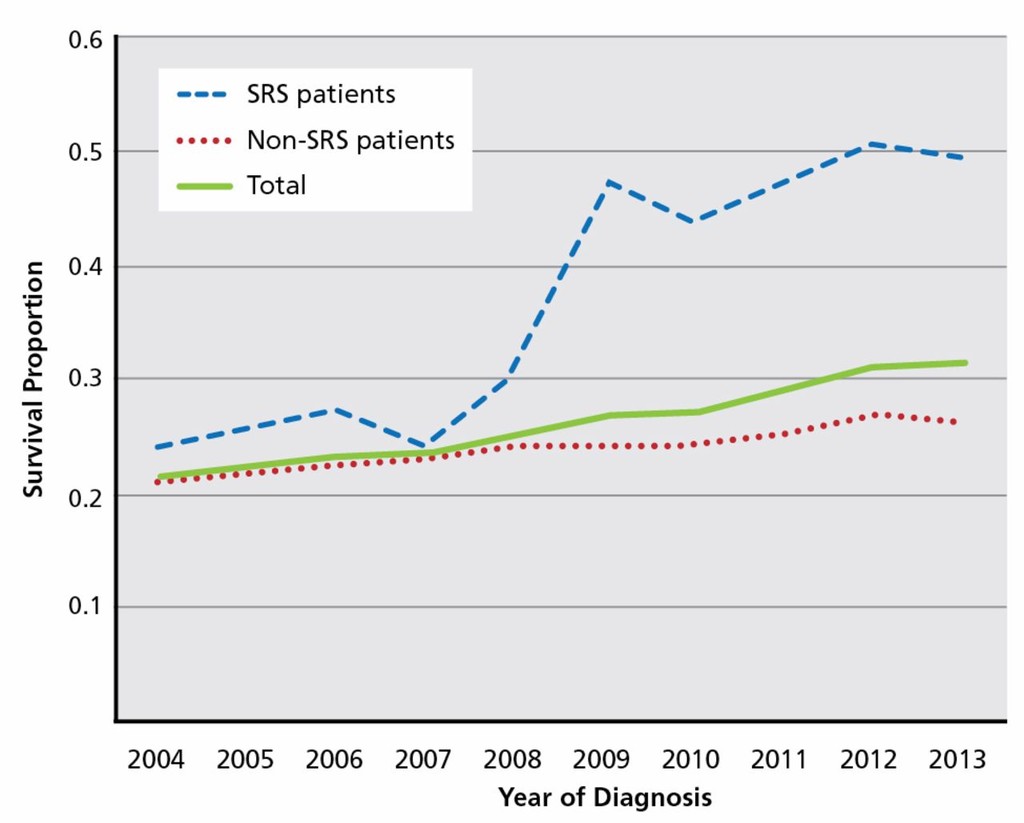 One-year actuarial overall survival from 2004 to 2013 by brain radiotherapy modality. 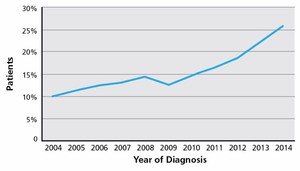 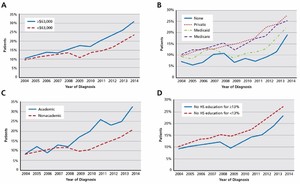 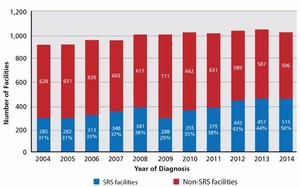 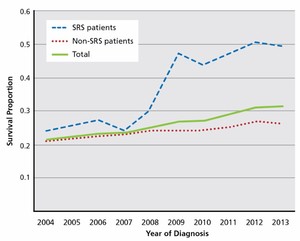