For patients presenting to the emergency department (ED) with specific conditions such as chest pain, new-onset atrial fibrillation, chronic obstructive pulmonary disease (COPD) exacerbation, and transient ischemic attack, observation status has been shown to be a viable alternative to inpatient admission.1–4 Observation status allows ED practitioners to make a more informed decision about whether to admit or discharge a patient based on additional diagnostic testing or response to a therapeutic intervention. Avoiding an inpatient admission is preferred by patients, especially because it reduces exposure to hospital-based risks and conditions. Typically, observation status is intended for <24-hours but can be extended if necessary. As hospitals experience increasing pressure to improve ED throughput and seek to minimize Medicare Recovery Audit Contractor penalties for inappropriate hospital admissions, observation status has become the focus of recent attention.5–7 Despite an increased focus on examining the use of observation status among the general population, its use among patients with cancer is not well understood. At the population level, observation status among older adults in general is extensive and increasing.5,8 This trend may reflect hospitals' recognition that some emergency care can be rendered without an inpatient admission. It may also reflect hospitals' response to changing reimbursement paradigms, because observation status might help reduce readmissions. The Hospital Readmissions Reduction Program, a provision in the Affordable Care Act, penalizes hospitals with higher-than-expected 30-day readmission rates for acute myocardial infarction, heart failure, pneumonia, total hip or knee replacement, and COPD.9 Of note, in a recent study, the authors found no difference in readmission rate with increased observation status use. This finding supports the notion that hospitals were not using observation status to avoid readmission penalties.10

Despite increasing attention on observation status, the extent to which it is used to successfully treat older adults with cancer is unknown. Patients with cancer aged ≥65 years are hospitalized at a rate of 156.1 per 10,000 patients every year, which is greater than the rate for older adults who do not have cancer.11 Inpatient hospitalization is even higher for patients with terminal disease.12 Patients with cancer are frequently admitted to hospitals with an acute complication of their disease or its treatment, or for refractory symptoms. The specific clinical syndromes for which patients with cancer are seen in the ED is an active topic of investigation. Common complaints include pain, respiratory distress, and gastrointestinal issues.13 There may be opportunities to develop standards for ED staff to manage certain conditions for patients with cancer in observation status, and to reserve hospital resources for those who need it most.

We used population-based SEER cancer registry data linked with Medicare claims to assess differences in the use of observation status between Medicare fee-for-service beneficiaries with and without cancer, using a matched retrospective comparative analysis.

SEER, a consortium of population-based cancer registries sponsored by the NCI, currently includes 18 registries covering approximately 28% of the US population. For all incident cancers in their coverage areas, SEER registries collect information regarding site and extent of disease, the first course of cancer-directed therapy, and sociodemographic characteristics, with active follow-up for date and cause of death. Medicare claims have been linked to SEER records for adults aged ≥65 years diagnosed with cancer and who reside in a SEER area. These claims include information on patient demographic characteristics as well as services, treatments, and procedures used by beneficiaries. Compared with the elderly US population, the SEER-Medicare population has a similar age and sex distribution, is somewhat more likely to live in urban and affluent areas, and has a smaller proportion of nonwhite individuals. The random 5% sample of Medicare beneficiaries who reside in SEER regions was used to identify patients without cancer for the matched comparative analysis.15

Study cases included all fee-for-service Medicare beneficiaries aged ≥66 years diagnosed with lung, breast, colorectal, or prostate cancer between 2006 and 2008, with follow-up through 2010. Beneficiaries <66 years of age were excluded due to lack of complete claims for the year before diagnosis. The month of diagnosis served as the study index date. Each Medicare beneficiary was followed for 2 years from diagnosis or until time of death, whichever came first. Patients with a prior cancer diagnosis, those whose cancer was diagnosed only at time of death, or those who were enrolled in an HMO or had incomplete Medicare Part A and B coverage from the year before diagnosis through the end of follow-up were excluded.

Cases were randomly matched to controls from the noncancer sample on a one-to-one basis without replacement by birth year range (5 years), geographic SEER region (Northeast, South, West, Midwest), sex, and race. Each matched control had the same study index date as its matched case. We excluded controls that were enrolled in an HMO or had incomplete Medicare Part A and B coverage from the year before the index date through the end of follow-up. Eligible controls had to be included in the data set for the duration of a case's follow-up period, because cases and matched controls were followed for the same duration.

Demographic and disease characteristics included age; race; a modified Charlson comorbidity index based on all inpatient, outpatient, and physician claims from 1 year before diagnosis16,17; and geographic region. For Medicare beneficiaries with cancer, we also included cancer type and disease stage.

We received approval from the NCI for use of the SEER-Medicare data set for this analysis. This study was considered exempt research by the Memorial Sloan Kettering Cancer Center Institutional Review Board.

A total of 161,457 cases met all eligibility criteria; of these, 151,193 (94%) were successfully matched to a noncancer control. Demographic characteristics were similar between cohorts. The mean age at the study index date was 77 years and the median age was 76 years for both cohorts. Both cohorts were predominantly white (85%), with 42% of beneficiaries residing in the Western SEER region (Table 1). The mean follow-up time was 18 months, with a median of 24 months among both groups.

Rates Among Patients With Cancer 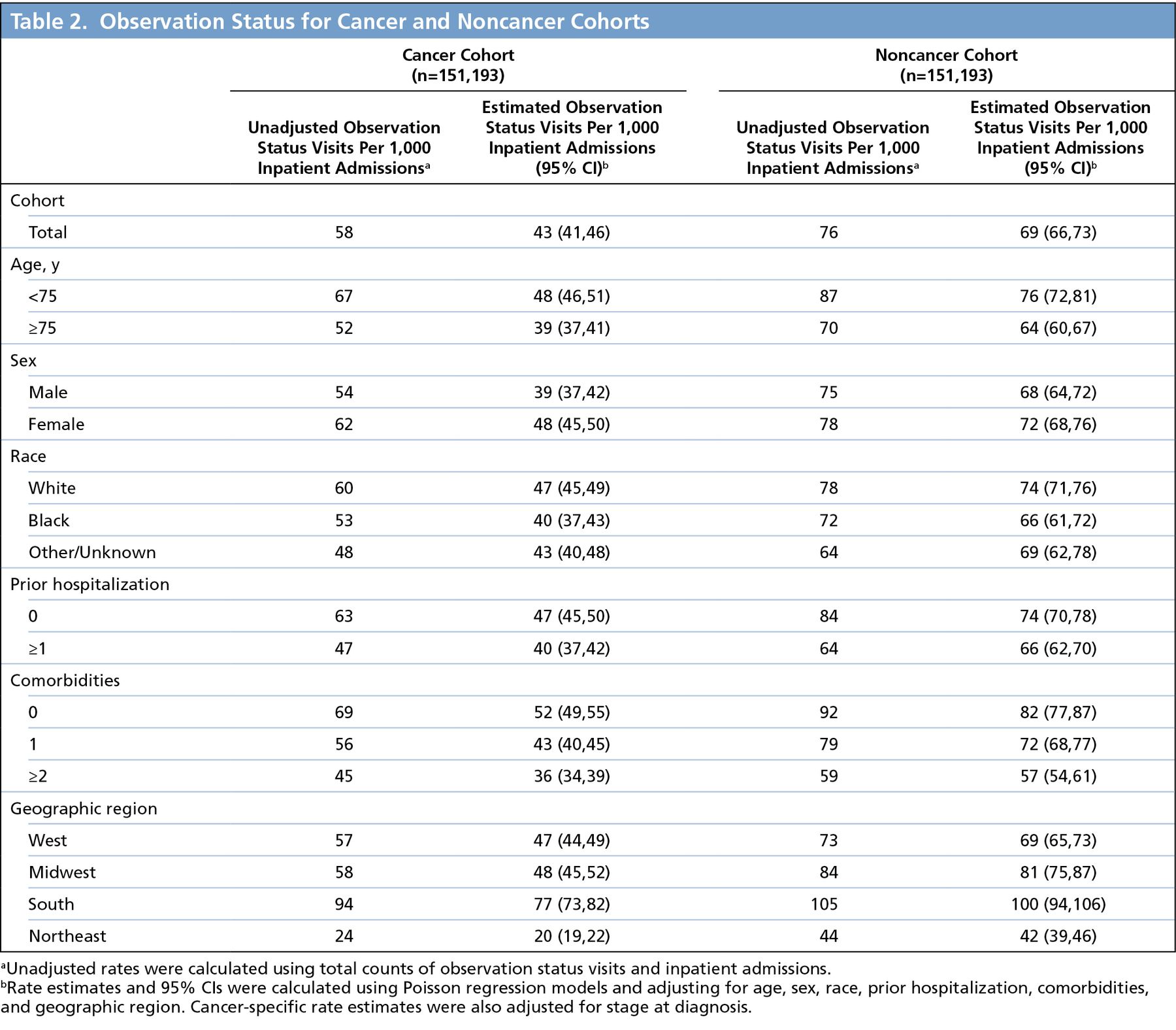 by cancer type. This finding could also similarly reflect the overall health status of the patient cohort. Alternatively, patients with breast cancer are often seen in the ED for complications of treatment administered in the adjuvant setting. As such, these patients may have a smaller burden of cancer-related symptoms than the other groups in this analysis.

There were some limitations in our study. In some cases, beneficiaries with cancer sought treatment at EDs for reasons unrelated to their cancer. We do not know this information from this data set. However, because we are comparing cohorts with and without cancer, the reasons unrelated to the cancer should be similar between groups. The true meaning of observation status varies by hospital. For some, it reflects a separate unit designed for monitoring patients and a unique management structure. For others, the term may be an administrative distinction.7 This inconsistency limits our ability to evaluate the impact of observation units on outcomes. We only included patients aged ≥66 years, and our results may not be generalizable to patients of all ages. The study is limited to 2 years of treatment and may not reflect use for long-term survivors.

Moving forward, there may be opportunities to develop standards for ED staff to manage patients with cancer presenting with certain conditions and with different types of cancer. This can help optimize resource utilization in the ED. As newer management options for oncologic emergencies are identified, such as evolving risk stratification paradigms for febrile neutropenia, observation status will likely play an increasing role.20 The NCI has identified the management of oncologic emergencies as an important knowledge gap and facilitated the creation of the Comprehensive Oncologic Emergencies Research Network (CONCERN) consortium in March 2015 to address this need (https://epi.grants.cancer.gov/concern/). CONCERN is a research network comprising academic and community hospitals charged with describing the use of emergency care by patients with cancer and developing evidence-based management strategies that improve cancer outcomes. It will be important to isolate the conditions that should be managed in observation status, outside the hospital, or in the hospital, and to reserve hospital resources for those who need it most. Minimizing healthcare costs but also matching patient needs with the appropriate level and type of care should be a priority, especially given policy changes such as through the Medicare Access and CHIP Reauthorization Act of 2015 (MACRA) that incentivize high-quality and low-cost healthcare.21

Observation status is used less for Medicare beneficiaries with cancer than for those without. Future research is needed to understand the impact of using different models to care for patients with cancer with acute health issues on important patient health and cost outcomes, as well as key factors that contribute to the success of these models.

Dr. Groeger has disclosed that he has a consulting or advisory role for T2 Biosystems. The remaining authors have disclosed that they have no financial interests, arrangements, affiliations, or commercial interests with the manufacturers of any products discussed in this article or their competitors.

This study was funded by Cancer Center Support Grant (P30 CA 008748). The funders had no role in this study design or conduct.