Characterization of Prostate Cancer in a Functional Eunuch

Prostate cancer (CaP) is the second leading cause of cancer-related death in men.1 CaP growth relies on the interaction between the androgen receptor (AR) and its ligands, testosterone and dihydrotestosterone (DHT).2 Most men who present with advanced CaP or who do not experience response to curative therapy receive androgen deprivation therapy. This therapy diminishes testosterone and DHT levels that inactivate AR, which induces tumor regression.3,4 The castration-recurrent/resistant phenotype (CRPC) is characterized by androgen deprivation therapy failure and CaP recurrence. One mechanism for AR activation in CRPC is intratumoral intracrine metabolism of weak adrenal androgens to testosterone or DHT5 via 1 or more of 3 pathways to DHT (Figure 1A). The frontdoor pathway uses adrenal androgens, dehydroepiandrosterone (DHEA), or Δ4 androstenedione (ASD) to make testosterone, and 5α-reductases (SRD5A) reduce testosterone to DHT. The primary backdoor pathway's terminal step uses 3α-oxidoreductases to convert 5α-androstane-3α,17β-diol to DHT. The secondary backdoor pathway requires both SRD5A and 3α-oxidoreductase enzyme activity to generate DHT.6–9

This article reports on a patient who experienced mumps orchitis at 13 years of age, before or at the onset of puberty. He developed secondary sex characteristics poorly; his body habitus is eunochoid and he shaves monthly. He was married briefly and never fathered a child. Hypertension has been controlled medically since 51 years of age. He started testosterone replacement therapy (TRT) to treat hypogonadal symptoms at age 60 years when his prostate examination was benign, prostate-specific antigen (PSA) level was 0.43 mcg/dL (Table 1), and PSA doubling time was 3.18 years. Transrectal ultrasound–guided prostate biopsy was performed at the start of TRT because high-grade prostatic intraepithelial neoplasia was identified in a single prostate biopsy core in 2009 and his PSA level had increased from 0.2 to 0.43. TRT was halted when prostate ultrasound revealed a 15-gram prostate, and prostate biopsy results found Gleason score of 4+4=8 in 30% of the right mid-medial core and Gleason score of 3+4=7 in 5% and 15% of the right base lateral and right apex lateral cores, respectively. Bone scan showed no evidence of metastasis. Serum testosterone measured in

This case study is important because the patient appeared to have had lifelong castrate or near-castrate androgen levels but developed CaP. This is the second reported case of a eunuch diagnosed with CaP, which prompted full characterization of the androgen axis. 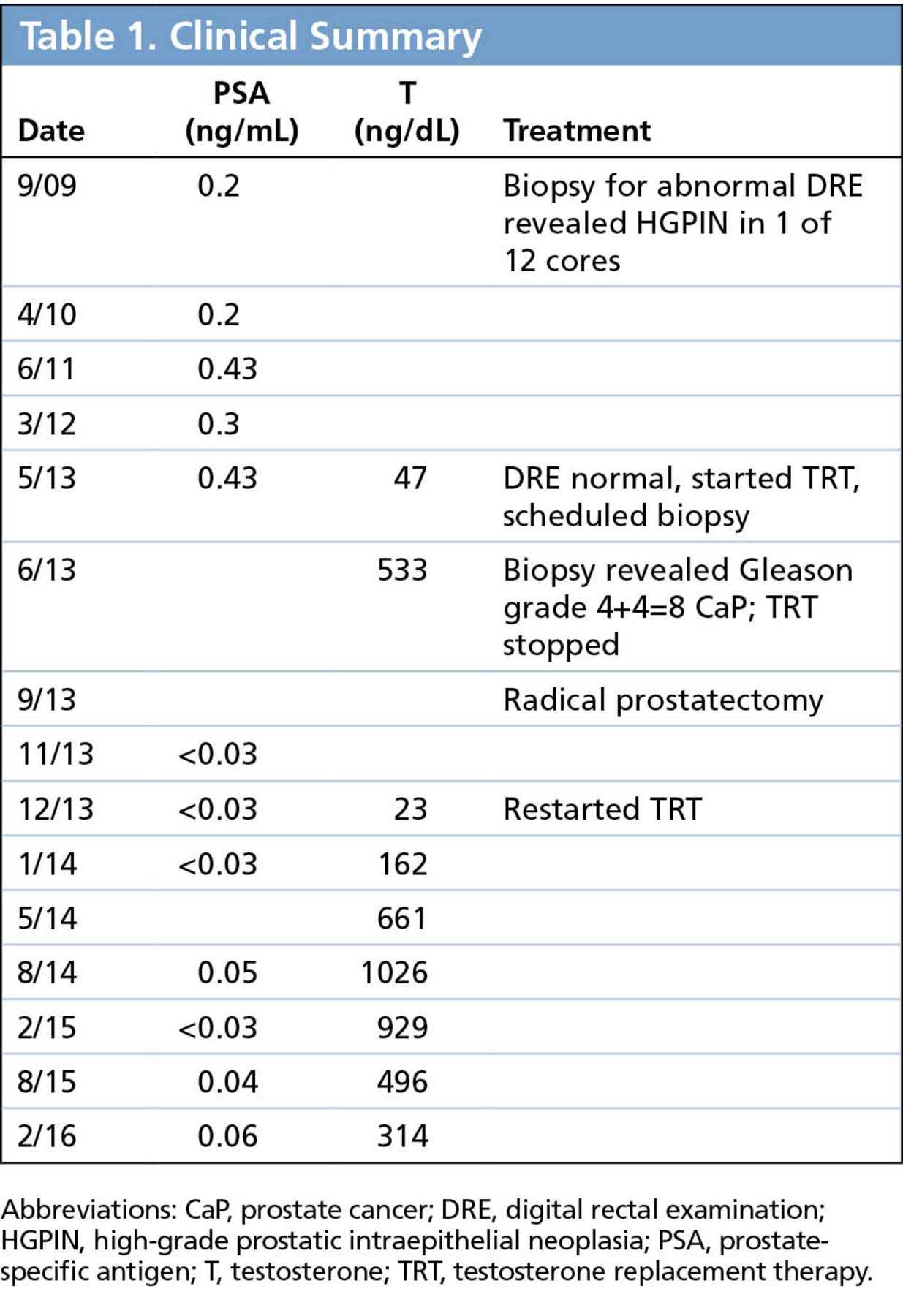 Tissue was procured as described,11 with modifications (see supplemental eAppendix 1, available with this article at JNCCN.org). Prostate tissue collected at radical prostatectomy was frozen and used for liquid chromatography-tandem mass spectrometry (LC-MS/MS) or quantitative reverse-transcription polymerase chain reaction (qRT-PCR). Biopsy tissue was formalin-fixed paraffin-embedded for immunohistochemistry. Serum was collected in 2005, 2013, and 2014 for LC-MS/MS.

Serum and prostate samples were analyzed over 3 runs for 6 androgens (testosterone, DHT, DHEA, ASD, androsterone [AND], and 5α-androstanedione [5α-dione]) using a modification of a validated LC-MS/MS method.12 5α-dione was measured but not validated in the original method. Sample extraction was performed using a 250-mcL aliquot of a calibrator, quality control, serum blank, or study sample (serum or prostate homogenate) with 750 mcL of HPLC-grade water, 100 mcL internal standard solution (75.0/225 pg/mL d3-T/d3-DHT in 75% methanol in water), and 4.0 mL methyl-tert-butyl ether (MTBE; Omnisolve, EMD Milipore, Billerica, MA). Tubes were vortexed, rotated for 15 minutes, and centrifuged using a Sorvall, model RT6000B centrifuge (Thermo Scientific, Grand Island, NY), at 2,800 rpm at 4°C for 15 to 30 minutes to separate liquid phases. The aqueous phase was frozen in a dry ice/acetone bath. The MTBE layer was poured into a clean glass conical tube, MTBE was evaporated at 37°C with nitrogen, and the residue was reconstituted in 60% methanol. The suspension was centrifuged using a Heraeus Multifuge X3R centrifuge (Thermo Scientific) at 2,800 rpm at 4°C for 5 minutes and an aliquot of the supernatant was injected into the mass spectrometer. LC-MS/MS was performed using a Prominence UFLC System (Shimadzu Scientific Instruments, Kyoto, Japan) and a QTRAP 5500 mass spectrometer (AB Sciex, Framingham, MA) with an electrospray ionization source and two 10-port switching valves (Valco instruments Co. Inc., Houston, TX; model EPC10W). Androgens were quantitated using prespiked calibration standards, and quality control samples were prepared in charcoal-stripped postmenopausal female serum (Bioreclamation, LLC, Westbury, NY).

Extracted samples were reinjected and chromatographed using a 28-minute gradient profile to examine 12 additional steroids in a semiquantitative manner. Steroids were quantitated using a single extracted serum calibrator that contained dihydroprogesterone, estrone, estradiol, cortisol, hydroxypregnenolone, hydroxyprogesterone, deoxycorticosterone, corticosterone, cortisone, aldosterone, or allopregnanolone, each at a concentration of 888 pg/mL, and pregnenolone at 307 pg/mL. Back-calculated concentration estimates of unknowns were obtained using slopes from the single-point serum calibrators forced through 0. Identification of the other 12 steroids in the study samples was based on specific mass spectral multiple reaction monitoring transitions and correlation of retention times with authentic standards. Lower limits of quantitation (LLOQ) cutoffs were estimated at a signal-to-noise ratio of 5 and depended on sensitivity. The approach provided an efficient semiquantitative screening technique for additional steroids to assess concentration differences between benign prostate (BP) and CaP tissues.

Serum calibration ranges and LLOQ are listed in supplemental eTable 1, and calibrator and quality control accuracy are listed in supplemental eTables 2 and 3, respectively. Acceptance criteria for accuracy and precision for testosterone, DHT, ASD, DHEA, and AND followed the FDA's bioanalytical guidance requirements,13 except for 5α-dione, which was allowed ± 25% for quality control (supplemental eTables 2 and 3). Correlation coefficients for all calibration curves were 0.9936 or greater. Data were represented as nM and were calculated by converting ng/g (ng/g = {[(ng steroid/mL homogenate) x (mL homogenate)] / (g tissue used in homogenate)} to nM (nM = {[(ng/g) * (1000 pg/ng)]/(pg analyte/pmol)}).

Eunuchs are surgically castrated men,24 and are thought to be incapable of developing functional prostates, benign prostatic hyperplasia (BPH), or CaP.

Huggins25 reported that orchiectomy causes a regression of BPH, and that eunuchs, who have castrate levels of circulating androgen, do not develop BPH. Wilson and Roehrborn26 describe the prostates of Chinese court, Ottoman court, and Skoptzy eunuchs as being impalpable, atrophic, and prepubertal, respectively.

The patient discussed in the present report lost testicular function before or at the onset of puberty; therefore, the patient is a functional eunuch. The patient presented with clinical Gleason score 4+4=8 T1cN0M0 CaP that proved to be pathologic Gleason score 3+4=7 pT3aN0M0 CaP after radical prostatecomy, which developed in a testosterone-limited environment. The case provided an opportunity to fully characterize androgen metabolism and AR-regulated pathways vital to CaP development and progression in unique samples.

LC-MS/MS revealed that testosterone was not measurable in either BP or CaP tissues, even though it was detectable in serum collected in 2005 and 2013. CaP tissues exhibited DHT levels sufficient for AR activation, but testosterone was undetectable. DHT appears to have been produced by the primary backdoor androgen metabolism pathway and not from androgens synthesized by the adrenal gland. DHEA accumulation observed in BP and CaP tissue may be because DHEA is an antagonist against the glucocorticoid pathway, which is evidenced by high levels of serum and tissue cortisol.27,28 Tissue ASD levels may be low because ASD is not produced by BP or CaP tissues, but requires uptake of adrenal-produced ASD that circulates at very low levels. Any ASD taken up by BP or CaP tissues from the circulation was converted directly to testosterone and 5α-reduced to DHT or exported from the prostate to the serum. DHT may have been sulfonated29 for paracrine reuse or metabolized to androstanediol or AND in BP or CaP tissue. AND and androstanediol can be glucuronidated and trafficked from tissue,30 but glucuronidated metabolites may have been expelled more efficiently by BP than CaP cells. Oesterling et al31 reported that adrenal androgens produced by the adrenal gland were not sufficient for prostate growth and development in men diagnosed with hypogonadotropic hypogonadism. DHT tissue levels and 3α-oxidoreductase, AR, and AR-regulated gene expression levels were lower in CaP than BP tissues. CYP17A1, an androgen metabolism enzyme that plays a key role in adrenal androgen synthesis, was not detected using qRT-PCR, and low protein expression levels were detected in BP and CaP tissues. CYP17A1 gene and protein expression levels may differ due to tight regulation of RNA. CYP17A1 activity was reported to be enhanced by phosphorylation32; enhanced enzyme activity may have initiated a negative feedback response to downregulate CYP17A1 RNA levels when protein levels reached an expression level threshold. DHT levels were sufficient for AR transactivation.5,21

BP used intracrine androgen metabolism to create the microenvironment necessary for the development of CaP that exhibited an androgen metabolism profile similar to that reported previously for CRPC.21 The patient's PSA level remained unchanged since radical prostatectomy despite normalization of circulating testosterone using TRT. LC-MS/MS, qRT-PCR, and immunohistochemistry data prove that the patient's BP and CaP tissue depended on the primary backdoor pathway to generate DHT. 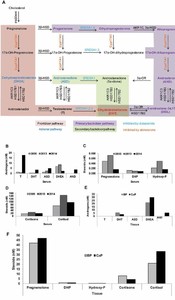 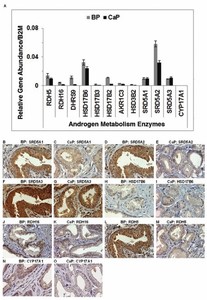 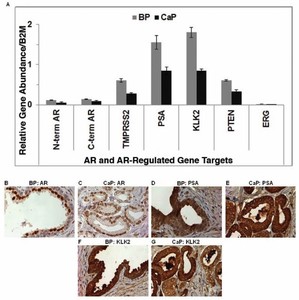