Adherence to Hematologic Hold Parameters in Carboplatin and Dose-Dense Paclitaxel Chemotherapy for Ovarian Malignancies: A Survey of NCCN Member Institutions

Ovarian cancer is the fifth leading cause of cancer death in women, accounting for more than 14,000 deaths in the United States in 2014.1 Patients with a new diagnosis of advanced-stage ovarian, fallopian tube, or primary peritoneal cancers undergo treatment consisting of both surgical debulking and chemotherapy. Conventional chemotherapy includes intravenous carboplatin and paclitaxel administered every 3 weeks for 6 cycles.2 The Gynecologic Oncology Group (GOG)-172 protocol demonstrated a progression-free survival (PFS) and overall survival (OS) benefit with intraperitoneal chemotherapy.3 More recently, the Japanese Gynecologic Oncology Group (JGOG) 3016 protocol noted improved PFS (mean of 28.2 vs 17.5 months with conventional therapy) and OS (mean of 100.5 vs 62.2 months, respectively) in patients with stage II–IV epithelial ovarian cancer using a dose-dense weekly paclitaxel treatment regimen in combination with intravenous carboplatin administered every 3 weeks.4 The efficacy of this regimen was confirmed in the United States by GOG-0262 protocol.5

Although the conventional regimen treats patients with carboplatin area under the curve (AUC) of 5.0 to 7.5 mg/mL/min and paclitaxel at 175 mg/m2 on day 1 of an every 3-week cycle,6 the dose-dense regimen maintains the same dose of carboplatin but alters the paclitaxel dosing to 80 mg/m2 on days 1, 8, and 15 of each 3-week cycle. In this treatment strategy, extending exposure time is hypothesized to increase the antitumor activity of paclitaxel. Dose intensity is also increased, with patients receiving a total of 240 mg/m2 of paclitaxel over 3 weeks compared with 175 mg/m2 with the conventional regimen.

Unfortunately, this dose-dense treatment strategy has been reported to result in a higher proportion of grade 2 and 3 hematologic toxicities.4 As a result, chemotherapy providers often hold or delay treatment. Holding treatment for just 1 of 3 weeks delivers only 160 mg/m2 of paclitaxel to the patient, which is equivalent to the conventional regimen, thereby negating the benefits from the dose intensity the patient would have incurred as part of the dose-dense regimen.

We hypothesized that outside of the clinical trials, chemotherapy providers may not be fully adherent to these modified hold parameters as established by published protocol. Therefore, the objective of this survey study was to query the practice patterns of NCCN Member Institutions to determine adherence rates to hematologic hold parameters for carboplatin and dose-dense paclitaxel chemotherapy in the treatment of advanced-stage ovarian, fallopian tube, and primary peritoneal cancers.

NCCN is a nonprofit alliance of 27 leading US cancer centers,7 although there were only 26 at the time of writing. We elected to study the practice patterns in these 26 institutions because NCCN Member Institutions have been reported to have a higher adherence to evidence-based guidelines.8 For each of these institutions, we primarily directed our survey questions to the panel members listed in the official NCCN publication.7 The study received exempt status from the Institutional Review Board at University of Michigan Health Systems (HUM00098851), as no patient identifier information was collected.

Each NCCN Member Institution was contacted directly by one of the study team members via email. If there was no response, they were contacted again for a total of 3 emails before being considered nonresponders. Hematologic hold parameters used during the administration of dose-dense chemotherapy were requested. Specifically, parameters sought were ANC and platelet count on day 1, 8, and 15 of each cycle of chemotherapy administration. The email included the following fill-in lines to allow for quick response from the participants: “ANC on day 1:” and “ANC

on days 8 and 15:”. Similar fill-in lines were provided for platelet counts. Survey members were instructed not to include any patient or hospital identifiers in their communication. Correspondence with NCCN site members was limited to one email, and no further clarification of protocols was requested.

Adherence was determined by comparing the site-specific hold parameters to those published in the protocol for JGOG 3016. Descriptive statistics were used to analyze the data. To protect the identities of the individual institutions, a unique identifier was recorded for the purpose of the analysis.

cycle, 36% (8 sites) were adherent to the protocol hold parameters.

Despite initial response to chemotherapy, the 5-year survival rate for patients with advanced-stage ovarian, fallopian tube, and primary peritoneal cancers remains exceedingly low at 45%.9 It has increased marginally since the introduction of platinum-based therapy in the late 1970s (up from 34% in 1975).10–12 Improvements in treatment have included administration of platinum/taxane chemotherapy using an intraperitoneal approach3 and, more recently, the dose-dense regimen.4 Despite its effectiveness, fewer than 50% of eligible patients receive intraperitoneal chemotherapy.13 Dose-dense chemotherapy has been increasingly used as an alternative and has recently been subject to evaluation in GOG-0262, which investigated treatment with every 3-week paclitaxel versus dose-dense weekly paclitaxel with carboplatin with or without bevacizumab in the treatment of advanced-staged epithelial ovarian cancer.5

To leverage the benefit of dose-dense chemotherapy, as demonstrated by JGOG 3016, it is critical

that patients receive adequate dosing of chemotherapy without delays or treatment holds. In our current study, however, only 27% of the NCCN sites surveyed adhered to the chemotherapy hold parameters outlined by the JGOG 3016 and GOG-0262 protocols. All other institutions used the higher hold parameters standard for the conventional every-3-week regimen.

Similarly, these conventional therapy parameters were used by JGOG 3016 at the start of the trial; however, nearly half of the patients had some portion of their chemotherapy held as a result of not meeting hold parameters.4 This prompted a protocol amendment with lower ANC and platelet cutoff (Table 1). These modified criteria were also subsequently adapted by the GOG-0262 protocol. Based on our findings, half of the patients in nearly 75% of the NCCN Member Institutions could be subject to delays in chemotherapy, which potentially compromises the beneficial therapeutic effects reported for this regimen.

This survey study specifically targeted NCCN Member Institutions, because previous research shows that they are more likely to be adherent to published protocols for cancer therapy. NCCN develops the guidelines for high-quality patient care based on evidence-based research and expert opinion.7 It has been reported that patients who receive care at sites adherent to NCCN Guidelines have improved survival.14,15 Additionally, sites with large volumes of patients with ovarian cancer have a higher likelihood of providing recommended care and have improved patient survival.15 NCCN Member Institutions are large-volume centers and are more likely to be providing treatment that is adherent with guidelines.8

There are limitations to our study. The sample size of our study is small, with only 26 sites surveyed. However, our overall survey response is high at 85%. Further, as a quality assessment study, the purpose of our work was not to evaluate a large volume of centers but rather to highlight a discrepancy in care among this specific group of sites and to encourage other centers to reflect on their own practice.

Representatives from each site were approached at the discretion of the study team; emphasis was placed on contacting the NCCN Ovarian Cancer Panel members whenever possible. These physicians are all providers of chemotherapy (either medical or gynecologic oncologists) and were therefore familiar with specific hold parameters at their institution. We therefore believe the information obtained from these representatives to be valid and accurate.

Finally, our study does not quantify the number of patients that is actually affected by the discrepancy between hold parameters. It is possible that only a few patients are affected: those whose ANC and platelet counts fall below the specific site's hold parameters but above the protocol parameters. However, the necessity for the protocol amendment made by JGOG 3016 lowering hold parameter values for patients in the trial underscores the importance of these new hold parameters.

Although much of the JGOG 3016 study population was able to safely tolerate the less stringent hold parameters, it does warrant mention that the study population of the JGOG 3016 had to fulfill various health criteria and may not be representative of typical patients receiving dose-dense chemotherapy. Study participants tend to be healthier and have fewer chemotherapy-related complications than typical patients. Further studies should be undertaken to elucidate the effect of nonadherence to hold parameters on PFS and OS in typical patients in the United States.

This work demonstrates that a high proportion of NCCN Member Institutions use hold parameters for carboplatin and dose-dense paclitaxel that are not consistent with the published parameters for this regimen. This may result in chemotherapy holds or delays, which have the potential to compromise the benefits in PFS and OS reported with this regimen. Future studies will investigate the impact of chemotherapy schedule alterations on patient outcomes.

NCCN Member Institution adherence to all hematologic hold parameters (absolute neutrophil count and platelets on days 1, 8, and 15 of each cycle) for carboplatin and dose-dense paclitaxel chemotherapy. 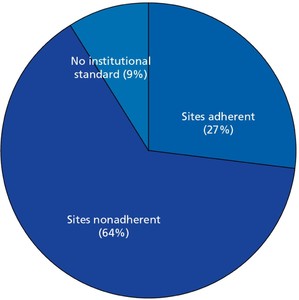 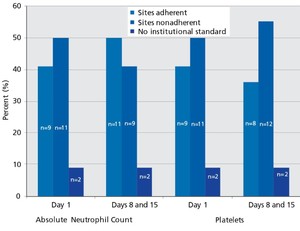