Advances in next-generation sequencing have provided a unique opportunity to understand the biology of disease and mechanisms of sensitivity or resistance to specific agents. Renal cell carcinoma (RCC) is a heterogeneous disease and highly variable clinical responses have been observed with vascular endothelial growth factor (VEGF)–targeted therapy (VEGF-TT). We hypothesized that whole-exome sequencing analysis might identify genotypes associated with extreme response or resistance to VEGF-TT in metastatic (mRCC). Patients with mRCC who had received first-line sunitinib or pazopanib and were in 2 extreme phenotypes of response were identified. Extreme responders (ERs) were defined as those with partial response or complete response for 3 or more years (n=13) and primary refractory patients (PRPs) were defined as those with progressive disease within the first 3 months of therapy (n=14). International Metastatic RCC Database Consortium prognostic scores were not significantly different between the groups (P=.67). Considering the genes known to be mutated in RCC at significant frequency, PBRM1 mutations were identified in 7 ERs (54%) versus 1 PRP (7%) (P=.01). In addition, mutations in TP53 (n=4) were found only in PRPs (P=.09). Our data suggest that mutations in some genes in RCC may impact response to VEGF-TT.

Recurrent molecular aberrations at the epigenetic, DNA, RNA, and protein levels have been identified in clear cell renal cell carcinoma (ccRCC).1 Common emerging themes have evolved, including dysregulation of the von Hippel-Lindau (VHL) gene and chromatin remodeling pathways.1 Kidney cancer genomics studies have identified recurrent mutations in novel tumor suppressors, such as chromatin-remodeling enzymes like PBRM1 (33%–45% incidence),2 BAP1 (10%–15% incidence),3 JARID1C/KDM5C/SMCX (3% incidence),1 and SETD2 (3%–12% incidence).4 These mutations have been used to define molecular classifications associated with differences in tumor biology and prognosis,5 but it is not known whether these tumor genotypes are associated with clinical response to treatment with vascular endothelial growth factor (VEGF)–targeted therapies (VEGF-TT), such as sunitinib or pazopanib. To examine a possible association between genomic alterations and response to VEGF-TT in RCC, we gathered patients with RCC with 2 distinct categories of response and performed whole-exome sequencing (WES) of pretreatment specimens.

Patients with metastatic RCC (mRCC) who received first-line sunitinib or pazopanib and were in 2 extreme phenotypes of response were identified. Extreme responders (ERs) were defined as those with partial or complete response (CR) for 3 or more years (n=13) and primary refractory patients (PRPs) were defined as those with progressive disease within the first 3 months of therapy (n=14). We performed WES in pretreatment formalin-fixed, paraffin-embedded samples (90% nephrectomies [n=18] and 10% lung metastases [n=2]) from 20 patients treated with sunitinib or pazopanib at Dana-Farber Cancer Institute. We also included 7 patients from The Cancer Genome Atlas (TCGA) treated with sunitinib or pazopanib in the metastatic setting who met the inclusion criteria. We used established Broad Institute analytical pipelines to identify point mutations and copy number alterations across the exome (see supplemental eAppendix 1, available with this article at JNCCN.org). In addition, a responder-enrichment algorithm was applied to identify genes selectively mutated in patients who were considered ERs.

The baseline characteristics of the ER cohort (n=13; PRP, n=14) are displayed in Table 1. No significant differences in International Metastatic RCC Database Consortium (IMDC) prognostic scores were identified between the 2 groups (P=.67). The top 5 recurrent mutations identified in the TCGA cohort, in which 22% of the samples were metastatic, were VHL (52%), PBRM1 (33%), SETD2 (12%), BAP1 (10%), and KDM5C (7%).1 In comparison, in our mRCC cohort, we detected VHL, PBRM1, SETD2, BAP1, and KDM5C mutations in 59%, 30%, 30%, 11%, and 11% of patients, respectively. We found the expected number of mutations for PBRM1 and KDM5C. An increased rate of BAP1 mutations has been associated with advanced clinical stage,5 which might explain the elevated proportion in our series. The higher prevalence of SETD2 mutations in our cohort is concordant with prior studies identifying SETD2 loss of function in advanced RCC metastases.6

VHL was the most common gene mutated, with similar frequency in ERs (64%) and PRPs (50%) (Figure 1). Subsequently, PBRM1, SETD2, and BAP1 were mutated in 30% (n=8), 30% (n=8), and 15% (n=4) of patients, respectively. PBRM1 mutations were highly recurrently mutated in ERs (54% vs 7%; P=.01). Conversely, TP53 mutations (n=4) were only identified in PRPs (P=.09). Interestingly, malfunction of p53 has been associated with resistance to sunitinib.7 We did not identify other gene mutations associated with either response or primary refractory disease.

The WES approach was used to analyze outlier cases, and identified a potential association between somatic PBRM1 mutations and favorable response to VEGF-TT in mRCC. Of interest is PBRM1, because it is the most commonly mutated chromatin-modifying gene in ccRCC. PBRM1 contains bromodomains that interact with lysine-acetylated histones to regulate gene expression, and PBRM1 mutations are associated with loss of PBRM1 expression.3 Furthermore, a report from a phase III clinical trial has suggested that PBRM1 might represent a predictive biomarker of benefit for targeted therapy.8 Taken together, these results may lead to further modification of patient management.

Although our primary hypothesis was based on extreme patterns of response, we also found that PBRM1 mutations and TP53 mutations were associated with survival. Patients with PBRM1 wild-type (WT) tumors had a median overall survival of 41.8 months versus not reached in the PBRM1 mutant group (P=.04). Alternately, patients with TP53 mutations 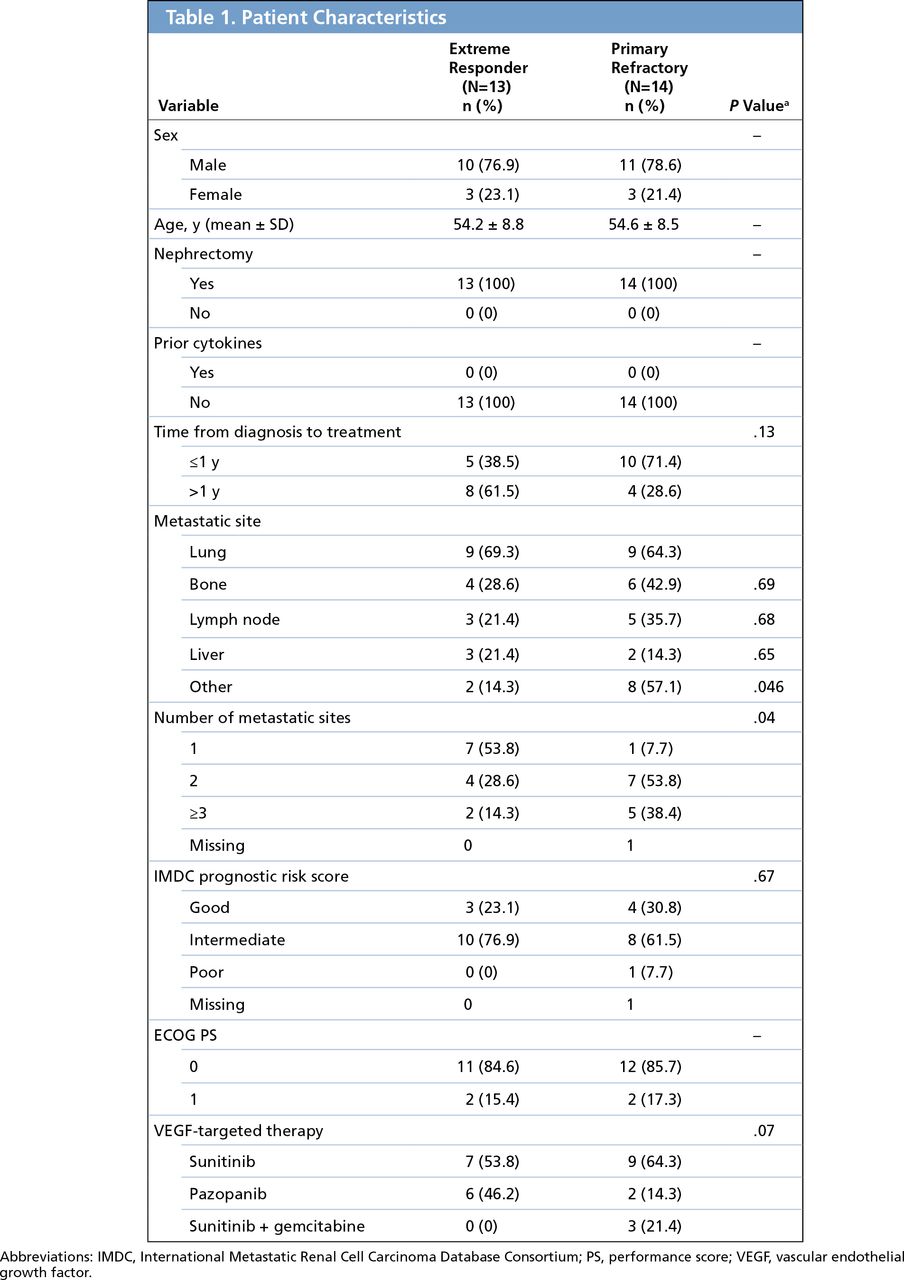 achieved a median overall survival of 7.1 months versus not reached in patients with TP53 WT tumors (P=.004). Despite our initial premise and selected population, these findings may suggest a prognostic role of such mutations, making it more difficult to distinguish between predictive and prognostic roles.

Our study has several limitations. First, it is important to mention that intratumor heterogeneity could be an important confounding factor. We only evaluated pretreatment specimens, and single specimens may not identify all subclone drivers during the evolution process. Moreover, the observed differences in mutation prevalence between TCGA and our cohort may reflect either the higher stage of presentation in our cohort or intratumor heterogeneity. It was estimated in a study of multiple biopsy cores from primary RCC tumors that a minimum of 3 distinct tumor regions are required for accurate tumor genotyping9; however, this is impractical in routine clinical care. These findings imply that larger studies with more statistical power are necessary to confirm our results. Second, although our mutation profiles were identified from metastatic tumors, we cannot determine whether these mutations are prognostic or predictive. As a prognostic algorithm, the IMDC has been externally validated and no significant differences in IMDC prognostic scores were identified between the 2 groups. There were also some baseline clinical differences between responders and nonresponders, such as the number of metastatic sites or the presence of “other” metastases. But there is not robust data suggesting such factors will determine sustained and durable responses. Although transcriptional profiling of PBRM1-mutant ccRCC tumors reveals a hypoxia signature, the molecular mechanism of how PBRM1 mutations could alter clinical outcome of VEGF-TT is unclear.2 Functional experiments are required to fully understand the mechanisms involved with these genomic alterations.

In conclusion, the discovery of mutations associated with divergent phenotypes of response aids in the understanding and development of molecular classifications of RCC. In a similar study of outliers, mutations that converge on pathways of TSC1 inactivation and mTOR signaling hyperactivation have been associated with durable responses to rapalogs.10 In our study, PBRM1 mutations were associated with favorable responses to VEGF-TT in mRCC. The findings are suggestive only and hypothesis-generating; however, the potential of tumor genotypes to select treatment on the basis of genomic classifications is attractive and deserves further validation in a larger cohort.

Representative map of mutations in respective genes according to response status. 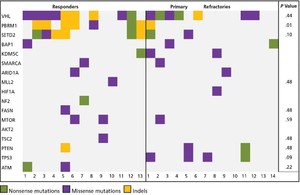