At the NCCN 21st Annual Conference, Alan P. Venook, MD, from UCSF Helen Diller Family Comprehensive Cancer Center, looked back for “lessons learned” in the treatment of metastatic colorectal cancer (mCRC) and peered into the future to gauge how the field is evolving. mCRC research and new treatment strategies can be informed by what has already been learned, said Dr. Venook, the Madden Family Distinguished Professor of Medical Oncology and Translational Research.

Advances in outcomes can be measured by the dramatic change in overall survival (OS). A meta-analysis from 1992—a time when treatment was almost exclusively 5-fluorouracil—showed median OS to be only 8 months.1 Approximately 20 years later, OS exceeds 30 months (Figure 1).2

Many of the advances in outcomes have come from the identification of patient subsets that will benefit most from a specific treatment. For example, the discovery of the RAS mutation and its importance in excluding treatment in patients who harbor RAS for agents that target the epidermal growth factor receptor is the best example of treatment refinement that improves survival—but only for the selected subset. Imaging with CT scans to find and treat metastatic disease earlier has also made a difference in survival, he said.

The introduction of new agents, however, has not increased outcomes for progression-free survival, for which median control-of-disease time hovers around 10 months.

“Colon cancer is a complex disease, and we have made progress by doing a lot of things well,” Dr. Venook suggested. The biggest benefit has come from physicians being “more nimble” in using “the tools on hand,” he said. “What is important is to strategize: what will I do next, and how can I spare patients toxicity?” Further, Dr. Venook emphasized that “It matters more that we do a variety of things, rather than being hyper-aggressive.”

What Has Worked, and What Has Not

Lessons have also been learned from what has not worked. One important hypothesis proved wrong was that a drug that works well in mCRC would also be effective in the adjuvant setting. In the NSABP and AVANT studies,3,4 bevacizumab did not improve outcomes in patients with stage II or III disease, nor did cetuximab in the N0147 trial for patients with stage III KRAS wild-type disease.5

“The paradigm we have historically used across all diseases—that if a drug is active in metastatic disease we will see activity in the adjuvant setting, and cure patients who would not otherwise experience a cure—did not turn out to be the case,” Dr. Venook stated.

Therefore, in the continuum of care, the optimal strategy is decided not from the start but “down the road,” during which time the physician observes the disease and the patient and adjusts treatment accordingly (Figure 2). “With multiple lines of treatment and maintenance, we are getting more treatment to the patient and that's probably making a difference,” he said.

There are novel strategies that appear effective and are gaining traction, but their effect on OS remains unknown. One of these novel strategies is selective internal radiation therapy (SIRT), which is yttrium-90–labeled resin microspheres that deliver a single large radiation dose to liver tumors. In a study reported at the 2015 ASCO Annual Meeting, SIRT plus FOLFOX and bevacizumab yielded a 7.9-month improvement in progression-free survival.8

“Radiation to the liver controls liver metastases effectively, but patients still succumb to extra-hepatic disease,” noted Dr. Venook, who said that pooled results from ongoing studies will be informative.

Take Stock and Figure Out Next Steps

It is now known that exercise, aspirin, and a non-Western diet are associated with a decreased risk of disease recurrence; aspirin is associated with a reduced risk of death; and sweetened beverages are associated with an increased risk of recurrence. Additionally, a low baseline vitamin D level is a poor prognostic sign for patients with metastatic cancer. Such knowledge “empowers patients to be in control of their outcomes,” he pointed out. However, Dr. Venook noted that it is not known if repletion of vitamin D is a simple way to improve outcomes, based on the results of CALGB/SWOG 80405 in which patients with the highest baseline levels had a 35% improvement in OS (P=.001).9

Also on the horizon is a greater appreciation of intratumoral heterogeneity as revealed by multi-region gene sequencing and an increasing knowledge of the key signaling pathways, their interaction, and the drugs that target them. These insights will help drive drug development and treatment selection.

“Because of complex interactions, it's unlikely that any one molecule will make a difference,” he acknowledged. Additionally, gene expression–based molecular profiles will stratify patients into 4 consensus molecular subtypes that may eventually become a new staging system. “Clearly, there are molecular features defining this disease, and the different biologic features related to genes may tell us which patients will do well and which won't,” he said.

A better understanding of molecular subtypes and signaling pathways is already informing drug development and treatment selection. Dr. Venook predicted the next actionable mutation in mCRC will be HER2, which is overexpressed in approximately 5% of patients. Combinations of anti-HER2 agents are currently being evaluated in this patient subgroup.

A very encouraging step forward has been the discovery that the immune system can also be harnessed for therapeutic benefit in the subset of patients with mCRC and microsatellite instability (MSI)–high tumors. “Dramatic advances related to immune checkpoint inhibitors have changed the game,” he said. In the study by Le et al,10 the anti–PD-1 agent pembrolizumab produced immune-related responses in 62% of patients.

“We have seen patients rise from the ashes, so we recommend MSI testing for all patients with advanced CRC at the outset,” he said. “I suspect checkpoint inhibitors will be approved soon for this indication—they are remarkable drugs in this 3% of patients with mCRC.”

He also called for greater efforts to be directed toward screening for CRC. In a study in Delaware, an enhanced screening program substantially improved screening rates, reduced the diagnosis of CRC at advanced stages, and reduced mortality by 41%.11

Finally, Dr. Venook emphasized the need to appreciate tumor biology according to tumor location within the colon. Right-sided tumors carry a worse prognosis, possibly related to their different embryologic origin, microbiome, or molecular features. Location seems to be a biomarker for outcome that has virtually been ignored, he said, adding that data from an analysis of CALGB/SWOG 80405 will be presented at the 2016 ASCO Annual Meeting. 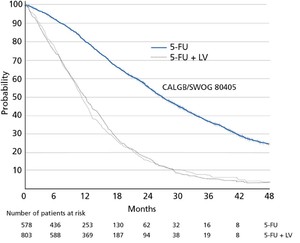 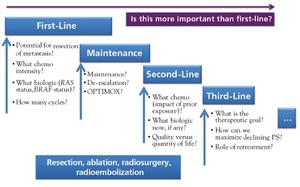