For the first time, NCCN Guidelines are available for vulvar cancer, a rare gynecologic cancer. Early-stage cancers can be managed by surgery and observation, and many of these patients can be cured. Lymph node status drives treatment and correlates with survival. Positive groinal nodes require additional therapy, including radiation plus chemotherapy, depending on stage. Sentinel lymph node biopsy is recommended in selected patients.

Vulvar cancer is rare. There are about 6,000 cases of vulvar cancer a year and 1,110 deaths,” said Benjamin E. Greer, MD, Professor at Fred Hutchinson Cancer Research Center and Co-Chair of the new NCCN Guidelines Panel for Vulvar Cancer. Dr. Greer presented information on the new guidelines at the recent NCCN 21st Annual Conference.

Based on 2 published randomized trials and a number of observational studies, the guidelines incorporate TNM staging based on tumor size, nodal status, extent of positive nodes, and International Federation of Gynecology and Obstetrics (FIGO) staging.

“Survival depends on nodal status,” Dr. Greer continued. He said that estimated survival is 70% to 80% with negative lymph nodes and 30% to 40% with positive lymph nodes in the groin. Over the years, treatment modifications have reduced morbidity and improved quality of life for patients with vulvar cancer. Modifications include regional lymph node management for unilateral cancers, radical local excision, separate groin incision, lymphatic mapping, radiation, chemotherapy, and exenteration.

The goal of primary surgery is to obtain an adequate negative margin of 1 to 2 cm, Dr. Greer told the audience. Early-stage tumors (T1, smaller T2) are biopsied and treated according to size. “Early-stage disease is often cured by surgery alone,” Dr. Greer continued.

SLNB is advisable only in selected patients. Criteria for patient selection include unifocal tumor less than 4 cm, clinically nonsuspicious nodes in the groin, no previous vulvar surgery, and adequate surgical experience and resources for the physician to perform the procedure properly.

The primary tumor is assessed after surgery, and nodal surgical pathology drives treatment. Postoperative radiation is given to patients with node-positive disease. Radiation with concurrent chemotherapy is advised for patients with inoperable carcinomas. Chemotherapy agents used concurrently with radiation include cisplatin, 5-FU and cisplatin, and 5-FU plus mitomycin C. For advanced, recurrent, or metastatic disease, chemotherapy should include cisplatin, cisplatin/vinorelbine, or cisplatin/paclitaxel.

“Studies have shown that not all groin failures are fatal. The vast majority of experts believe you need to control groin disease,” he said.

The randomized GOG 37 trial, conducted in the late 1980s, included patients with fairly advanced lymph node–positive vulvar cancers who were randomized to undergo bilateral pelvic node dissection versus bilateral groin/pelvic radiation.1 An interim analysis showed that the 2-year survival rate was 68% in women treated with radiation versus 54% for those treated with pelvic LND. This was a significant advantage (P=.03) manifest primarily as groin control.

Posthoc analysis of that trial and a longer-term follow-up of 74 months2 suggested that patients who derived the most benefit from radiation had more than 2 positive nodes or N2 (palpable suspicious lesion)/N3 (fixed ulcerated node), Dr. Koh said. Today's staging (Figure 1) considers N3 as extracapsular extension and N2 as gross disease, Dr. Koh noted. He stated that selecting patients for adjuvant therapy is challenging. Rather than look at the total number of nodes, he suggested using a ratio of the number of positive nodes per side divided by the number of resected nodes. “This may allow for better selection for adjuvant radiation,” he finished.

Nodes larger than 2 mm have a poor prognosis. Microscopic staging and size of 2 mm are useful cut-offs for decision-making, Dr. Koh said.

Dr. Koh explained that in older trials, radiation treatment was given to a depth of 3 cm, which is inadequate. “Very few groin nodes lie within 3 cm of the skin,” he noted. In today's environment, the standard of care is to use CT-based treatment planning to determine radiation field and dose. Predictors of vulvar relapse are a tumor-free margin less than 8 mm, tumor thickness and depth of invasion greater than 10 mm, spray pattern histology, and vascular space invasion.

“In my practice, I don't radiate the vulva,” Dr. Koh said. “Radiation to the vulva can cause significant morbidity. I use adjuvant radiation at the primary site if the patient is not a candidate for further surgery.” There is no phase III data on whether chemotherapy is of benefit for groin lymph node disease. “These patients have a poor outcome, with 2-year survival of 23%, and tend to be elderly with significant medical comorbidities,” he said.

“Treatment of vulvar cancer requires large volumes of radiation. There is a tendency to want to use IMRT [intensity-modulated radiation therapy], but I advise physicians to be cautious about using small volumes,” Dr. Koh continued.

“There is a debate in the guidelines about whether you should go straight to radiation for locally advanced disease. Today's standard of care is probably weekly platinum with concurrent radiotherapy for positive lymph nodes,” Dr. Koh said.

A biopsy of the tumor bed should be considered to confirm pathologic complete response for patients who are clinically negative for residual tumor at the primary site and nodes.

“Full nodal dissection is a contentious issue,” Dr. Koh commented. “My preference is upfront chemoradiation and then dissect the nodes later. The guidelines give you both options.”

The presenters have disclosed that they have no financial interests, arrangements, affiliations, or commercial interests with the manufacturers of any products discussed in this article or their competitors.

AJCC and International Federation of Gynecology and Obstetrics staging used in the new NCCN Guidelines for Vulvar Cancer. 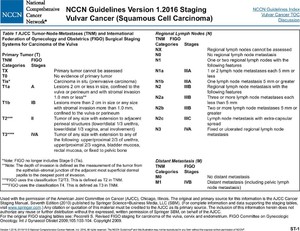