Palliative care is specialized medical care for people with serious illness at any stage that focuses on optimizing patient quality of life.1 A multidisciplinary palliative care team will often include physicians, nurses, social workers, pharmacists, and spiritual counselors who collaborate with other medical providers. The palliative care team specializes in whole person assessment, symptom management, and advanced-care planning communication. In oncology, palliative care has increasing relevance given recent studies that link palliative care to improved patient quality of life, reduced cost of care, and even improved survival in patients with metastatic cancer.2–9 In fact, current national clinical guidelines recommend early combined integration of palliative care with standard oncology care for any patient with metastatic cancer or high symptom burden.10

This study identified patients with cancer from the SEER-Medicare linked database. SEER represents a collection of individual cancer registries geographically spread across the United States accounting for approximately 28% of the US population. SEER collects information on incident cancer diagnoses within each cancer registry, including demographic, clinical, tumor-specific, and treatment-related information. Medicare provides federally funded health insurance for patients older than 65 years. The SEER-Medicare linked dataset combines patient information from SEER with claims information from the Medicare program. The Medicare claims data allows the ability to track longitudinal patterns of care and health outcomes beyond what SEER captures. Although some minor differences exist in elderly patients within SEER-Medicare compared with the greater United States, overall this unique population-based dataset allows researchers to follow patterns of care and outcomes from prior to diagnosis through the end of life.14 The Institutional Review Board of the University of California San Diego deemed this study exempt from review.

This study included patients 66 years of age and older with breast, prostate, lung, or colorectal cancer, which represent the 4 most common cancers in the United States.15 SEER-Medicare includes patients 65 years of age and older; however, we included patients 66 years of age and older to allow for a 1-year time window before diagnosis to ascertain preexisting comorbidity (described further later). From the SEER-Medicare database, we initially identified 166,124 patients with histologically confirmed distant metastatic cancer diagnosed between 2000 and 2009. We excluded patients with multiple primary tumors (n=21,550), and those diagnosed at death or on autopsy (n=299). This study focused on palliative care in the oncology setting; therefore, we excluded patients who died of noncancer causes (n=12,043) and patients alive at the end of the follow-up period (n=9,942) on December 31, 2010. As is standard in research involving SEER-Medicare, we excluded those with incomplete Medicare claims data. This resulted in excluding subjects without continuous Medicare Parts A and B, or enrollment in Part C any time from 1 year before diagnosis (to determine comorbidity) through death (to identify palliative care). The final study population included 83,022 subjects.

Consultation with a palliative care provider was identified using the International Classification of Diseases, Ninth Revision (ICD-9) code V66.7 (“Encounter for Palliative Care”) which is a V-code modifier for palliative care created in 1996.16 We identified inpatient and outpatient palliative care consultation separately by their appearance in their respective Medicare files. Note that in Medicare, enrollment into hospice is recorded separately from an encounter with palliative care. Hospice use has been characterized extensively elsewhere, and was not included in this analysis.

Patient-related demographic variables obtained in SEER included age at diagnosis, sex, race, marital status, and median household income. Median household income was estimated from the 2000 US Census using census tract data preferentially over zip code data, and divided into quartiles for analysis. Patients with missing household income (n=22) were included in the bottom quartile.17 Comorbidity before cancer diagnosis was estimated using the Deyo adaptation of the Charlson comorbidity index, which uses inpatient and outpatient Medicare claims data the year prior to a patient's cancer diagnosis.18,19 Individual SEER cancer registries were reclassified into East (Connecticut and New Jersey), Midwest (Detroit and Iowa), South (Georgia, Kentucky, and Louisiana), and West (California, Hawaii, New Mexico, Seattle, and Utah). Care in a teaching hospital was defined as any indirect medical education payment during a hospitalization after cancer diagnosis.

This study evaluated the association between the regional use of cancer-related palliative care and regional health care characteristics. Regional geography was evaluated at the level of hospital referral regions. There are 306 hospital referral regions spread across the United States, and each distinct geographic region represents a predefined health care market for tertiary care services.20 We looked for correlations in the regional use of palliative care and various aggregate regional health care characteristics. Regional hospital and provider characteristics, obtained from the Dartmouth Atlas of Health Care,21 included the following variables: number of acute care hospital beds, primary care physicians, hematologist-oncologists, and total physicians. Regional health care use was evaluated with a measure of the average number of days spent in an inpatient hospital and intensive care unit (ICU) in the last 6 months of life, and the percentage of patients who die in a hospital compared with a nonhospital setting. Regional health care expenditure was expressed as the regional annual Medicare reimbursement per enrollee in that specific hospital referral region adjusted for race, age, sex, and geography.20 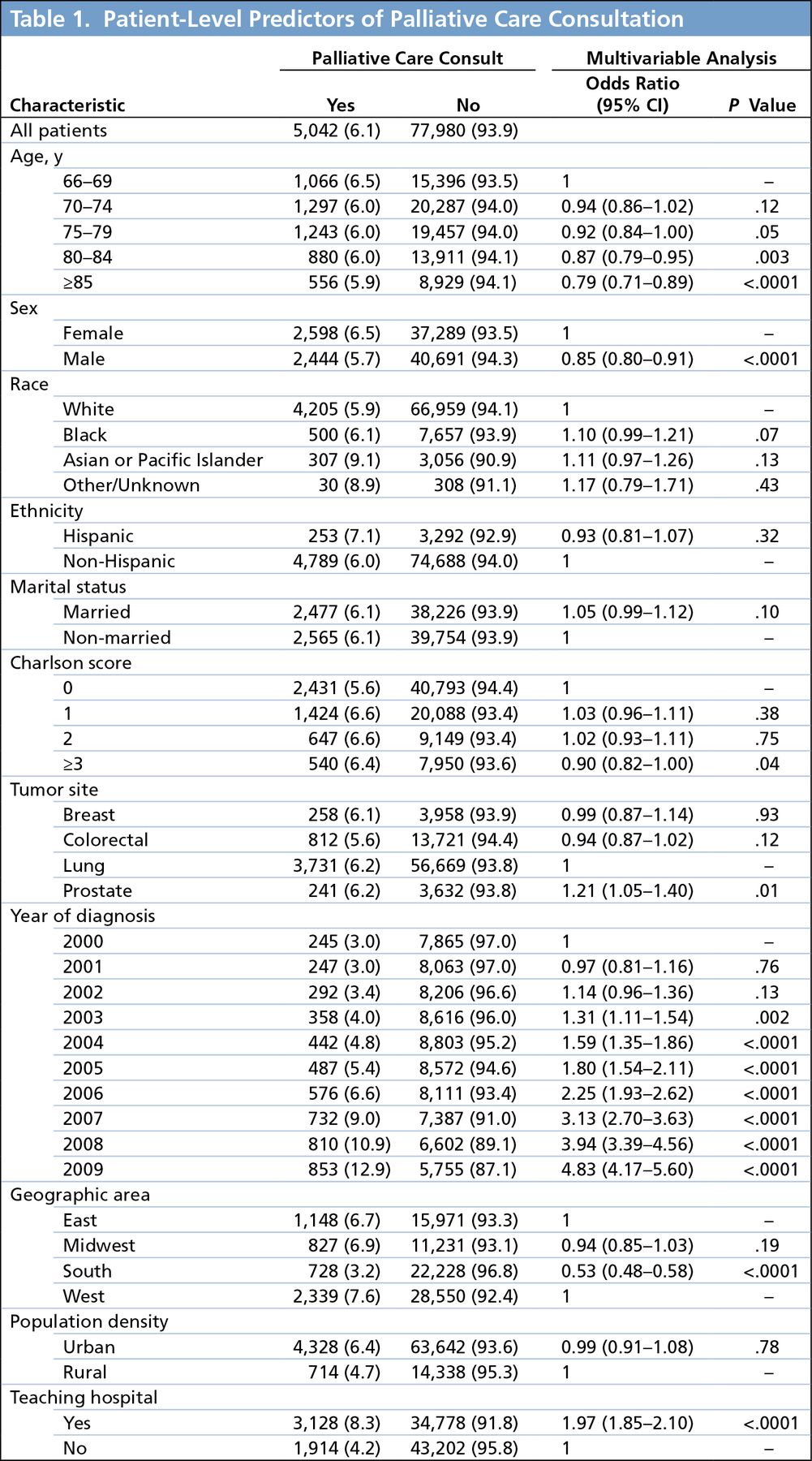 A notable finding of our study highlights the observation that palliative care interventions occur very near the end of life, most often in an inpatient setting. In fact, more than one-third of patients receiving palliative care did so in the last week of life.

These findings echo survey data from US cancer centers showing that palliative care referrals occurred late in patients' disease trajectories.11 Additional survey data from Canada also found late referrals to palliative care, often in response to patients with uncontrolled symptoms.25 The landmark study by Temel et al,5 published in 2010, demonstrated the impact of early palliative intervention. This study found that patients with metastatic lung cancer had improved quality of life and survival when early palliative care was integrated with standard oncology care. ASCO and NCCN both have clinical guidelines that recommend early integration of palliative care among patients with incurable cancer.10,26 It is important to consider that these guidelines were published after our study period (2000–2009), although we found that most palliative care is delivered in the inpatient setting near the end of life. This suggests that palliative care today is far from achieving the recommended early, simultaneous integration delivery model into standard oncology care.

This population-based study has limitations worth considering. Given the nature of SEER-Medicare data, we cannot readily validate the sensitivity or specificity of the ICD-9 code for palliative care. Although the code appears specific to palliative care consultation, undercoding is likely, which could lead us to underestimate palliative care delivery in elderly patients with cancer. Additionally, our analysis did not include patients younger than 66 years. We found increasing rates of palliative care among our youngest cohort of patients, which could indicate higher rates among patients younger than 65 years; however, we do not know for certain if these results generalize to a younger population. This representative sample is also limited to patients with cancer located in SEER locations, and therefore our findings my not translate to regions outside of SEER. Finally, we restricted our analysis to breast, colorectal, lung, and prostate cancers, and excluded patients in managed care organizations; therefore, our results may not generalize to other cancers, patients without cancer, or different health care networks.

Despite these limitations, in this population of Medicare patients with advanced cancer we found that the rates of palliative care have steadily increased over the past decade, although consultations appear to occur very near the end of life and mostly in the inpatient setting. Additionally, geographic location substantially influences whether a patient will receive palliative care. These findings provide useful information on potential barriers in palliative care dissemination and provide guidance for future areas of palliative care growth. 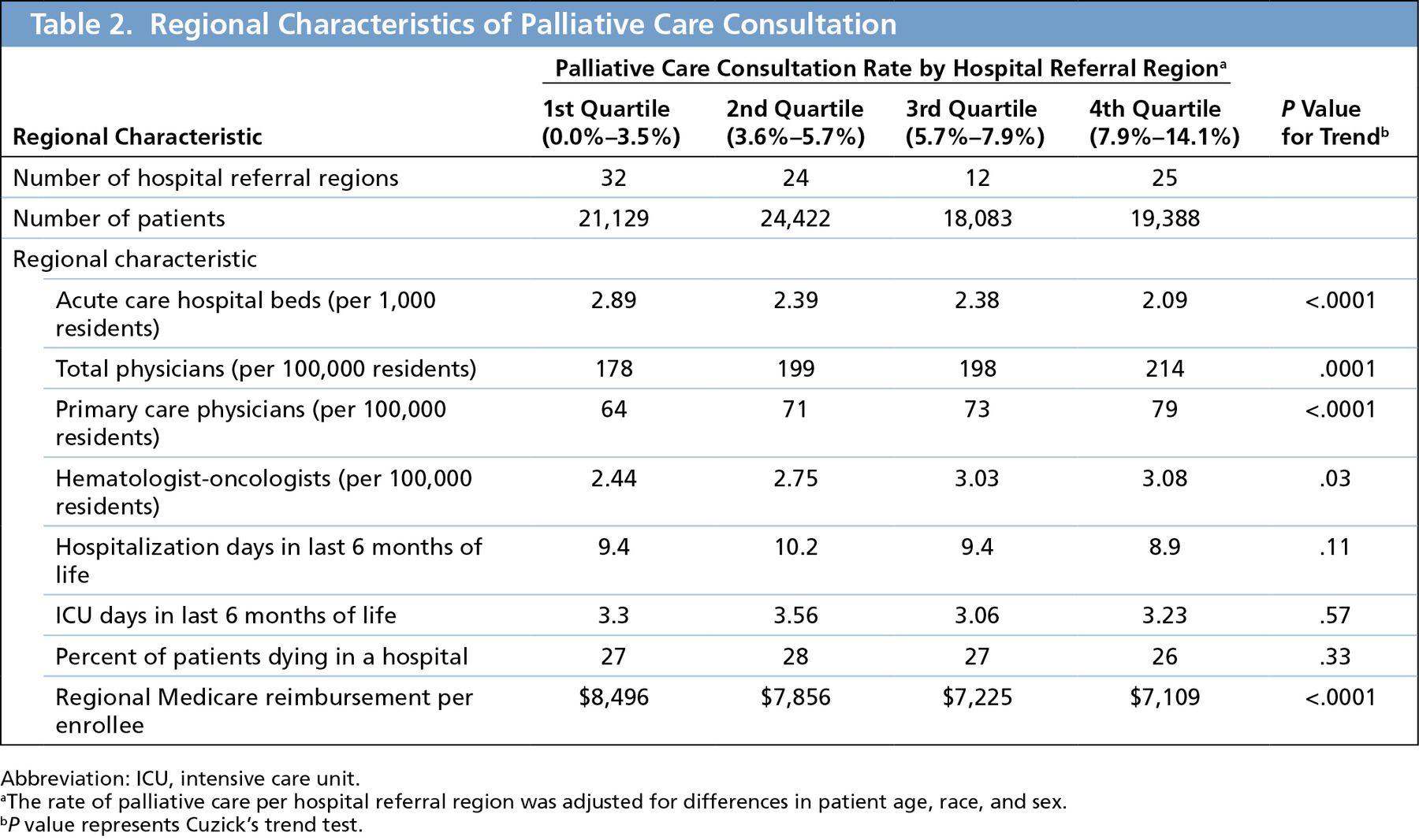 The authors have disclosed that they have no financial interests, arrangements, affiliations, or commercial interests with the manufacturers of any products discussed in this article or their competitors. This study was supported by NIH KL2 RR031978 (J.D.M.) and NIH T32 (I.J.B.). 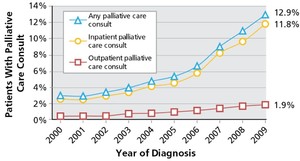 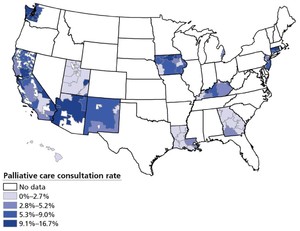