Search for other papers by Jaffer A. Ajani in
Current site
Google Scholar
PubMedClose
MD

Background: Among patients with localized esophageal cancer (LEC), 35% or more develop distant metastases (DM) as first relapse, most in the first 24 months after local therapy. Implementation of novel strategies may be possible if DM can be predicted reliably. We hypothesized that clinical variables could help generate a DM nomogram. Patients and Methods: Patients with LEC who completed multimodality therapy were analyzed. Various statistical methods were used, including multivariate analysis to generate a nomogram. A concordance index (c-index) was established and validated using the bootstrap method. Results: Among 629 patients analyzed (356 trimodality/273 bimodality), 36% patients developed DM as first relapse. The median overall survival from DM was only 8.6 months (95% CI, 7.0–10.2). In a multivariate analysis, the variables associated with a higher risk for developing DM were poorly differentiated histology (hazard ratio [HR], 1.76; P<.0001), baseline T3/T4 primary (HR, 3.07; P=.0006), and baseline N+ LEC (HR, 2.01; P<.0001). Although variables associated with a lower risk for DM were age of 60 years or older (HR, 0.75; P=.04), squamous cell carcinoma (HR, 0.54; P=.013), and trimodality therapy (HR, 0.58; P=.0001), the bias-corrected c-index was 0.67 after 250 bootstrap resamples. Conclusions: Our nomogram identified patients with LEC who developed DM with a high probability. The model needs to be refined (tumor and blood biomarkers) and validated. This type of model will allow implementation of novel strategies in patients with LEC.

Among patients with localized esophageal cancer (LEC), 35% or more develop distant metastases (DM) as first relapse, most in the first 24 months after local therapy.1 Worldwide, yearly new cases of esophageal cancer are estimated to be 482,300 and yearly deaths are estimated to be 406,800, and these include approximately 17,990 new cases and 15,210 deaths in the United States.2,3 For LEC, patients are offered preoperative chemotherapy,4 preoperative chemoradiation,5,6 or definitive chemoradiation7 depending on multiple factors (comorbidity, geographic distribution of cancer, practice preferences, and/or patient preferences).6

Approximately one-third or more patients with LEC who are offered various multimodal therapies subsequently develop DM,1,8 with the bulk of DM occurring within 2 years (more occurring in the first 12 months than in the second 12 months).1 The frequency of DM appears to correlate with higher postsurgical stage after trimodality therapy (TMT),1 and DM appears to be higher in patients assigned to bimodality therapy (BMT) than to TMT, because those who undergo BMT often have bulkier LECs. However, the worst-case scenario occurs when a patient undergoing TMT develops DM within 12 months of surgery. TMT can present considerable challenges to a patient's lifestyle, and one can argue that surgery should be avoided in patients with LEC who develop DM early in their clinical course. Another possible argument is that chemoradiation should be avoided in patients undergoing BMT who are likely to develop DM within months. Perhaps these patients can be palliated another way and the morbidity of chemoradiation can be avoided. This is an unmet need for this group of patients. Currently, tools that help identify these patients are not available. Nomograms provide much higher clinical value than individual independent variables in a multivariate analysis, because nomograms, by producing a single score per patient, have a higher clinical utility.9 A predictive nomogram can help to develop alternative strategies for patients with LEC who are at high risk for DM.

We analyzed a large number of patients with LEC from our prospectively maintained database in the Department of Gastrointestinal Medical Oncology at The University of Texas MD Anderson Cancer Center. Patients were identified between 2002 and 2013, had histologically confirmed LEC, and had completed BMT or TMT and were followed. All patients were fully staged with baseline endoscopic ultrasonography and CT and/or PET. Clinical staging was based on the 6th edition of the AJCC Cancer Staging Manual.10 The Institutional Review Board approved the study.

Each patient was evaluated by multiple disciplines and then discussed in the multidisciplinary conference (consisting of radiologists, gastroenterologists, thoracic surgeons, radiation oncologists, pathologists, nutritionists, geneticists [when appropriate], medical oncologists, and other caretakers) before proceeding with therapy. In addition to BMT or TMT, a fraction of patients had received induction chemotherapy (which has been shown not to influence the outcome of patients with LEC).11 Radiotherapy was given as 1.8 Gy per fraction for a total dose ranging from 45 to 50.4 Gy. At least 2 cytotoxic agents were routinely used. All patients received a fluoropyrimidine (intravenous or oral) plus either a platinum compound or a taxane with concurrent radiation. After chemoradiation, patients underwent restaging to include imaging and endoscopy. TMT-eligible patients proceeded to surgery. Patients were considered to have received TMT if surgery was performed within 6 months from the end of chemoradiation, and were considered to have received BMT if no surgery was performed or if surgery was performed more than 6 months after the completion of chemoradiation. No other selection criteria were implemented.

For patients undergoing BMT and TMT, we followed a uniform surveillance strategy as described for the patients undergoing TMT.12 Patients were monitored approximately every 3 months in the first 12 months, then every 6 months in the next 24 months, and then yearly until at least 5 years after treatment or until death. The survival follow-up was performed through our institution's tumor registry, electronic medical records, and/or the social security database.

Patient characteristics were summarized using median (range) for continuous variables and frequency (percentage) for categorical variables. Fisher's exact test and Wilcoxon rank sum test were used to compare patient characteristics between TMT and BMT groups. Overall survival (OS) was defined as the interval between treatment start and the date of death due to any cause. Patients who were alive at the last follow-up date were censored at that time. Time to DM (TTDM) was defined as the interval between treatment start and the date of DM. Patients who were DM-free at the last follow-up date or died without DM were censored at the last follow-up date or death date, respectively. The probabilities of OS and being DM-free were estimated using the Kaplan-Meier method. Log rank tests and univariate Cox models were used to evaluate the association between patient characteristics and TTDM. Variables with a P value less than 0.15 in the univariate analyses were included in the multivariate Cox proportional hazards regression model in order to identify those variables that were significantly associated with the risk of DM. The proportional hazards assumption was assessed using the method by Grambsch and Therneau.13 Using a backward model selection procedure,14 a final multivariate Cox model was identified. A nomogram for predicting the risk of DM was generated based on this final fitted Cox model. Its prediction accuracy was accessed using Harrell's concordance index (c-index).15 The model was internally validated using bootstrap resamples (n=250) to calculate a bias-corrected c-index. Statistical analyses were performed using SAS 9.3 software (SAS Institute Inc., Cary, NC) and R software (http://www.r-project.org/). Statistical significance was defined as a P value less than 0.05.

Figure 1 shows the nomogram developed to predict the risk of DM based on the fitted multivariate Cox regression model. The c-index based on the fitted model was 0.69. We also performed internal validation using bootstrap resamples (N=250), and the bias-corrected c-index was 0.67.

Patients with LEC have a poor prognosis because many develop DM after local therapy is completed. In a large LEC population that underwent TMT, we previously reported that the rate of DM is higher among patients with a higher pathologic postchemoradiation stage.1 This observation is consistent with our previous report in which we documented that the more resistant the primary tumor is to chemoradiation, the more likely it has aggressive clinical features and the ability to develop DM.16 In patients undergoing TMT,1 and also those undergoing BMT (unpublished data, 2013), DM occurs relatively early in the course of surveillance. This observation is of considerable importance, particularly for those undergoing TMT. The scenario one would not want to observe is one in which a patient completes TMT but develops DM within months of surgery. The prognosis of such patients is extremely poor and their survival is short. We should strive to identify patients, particularly those undergoing TMT, who are at risk 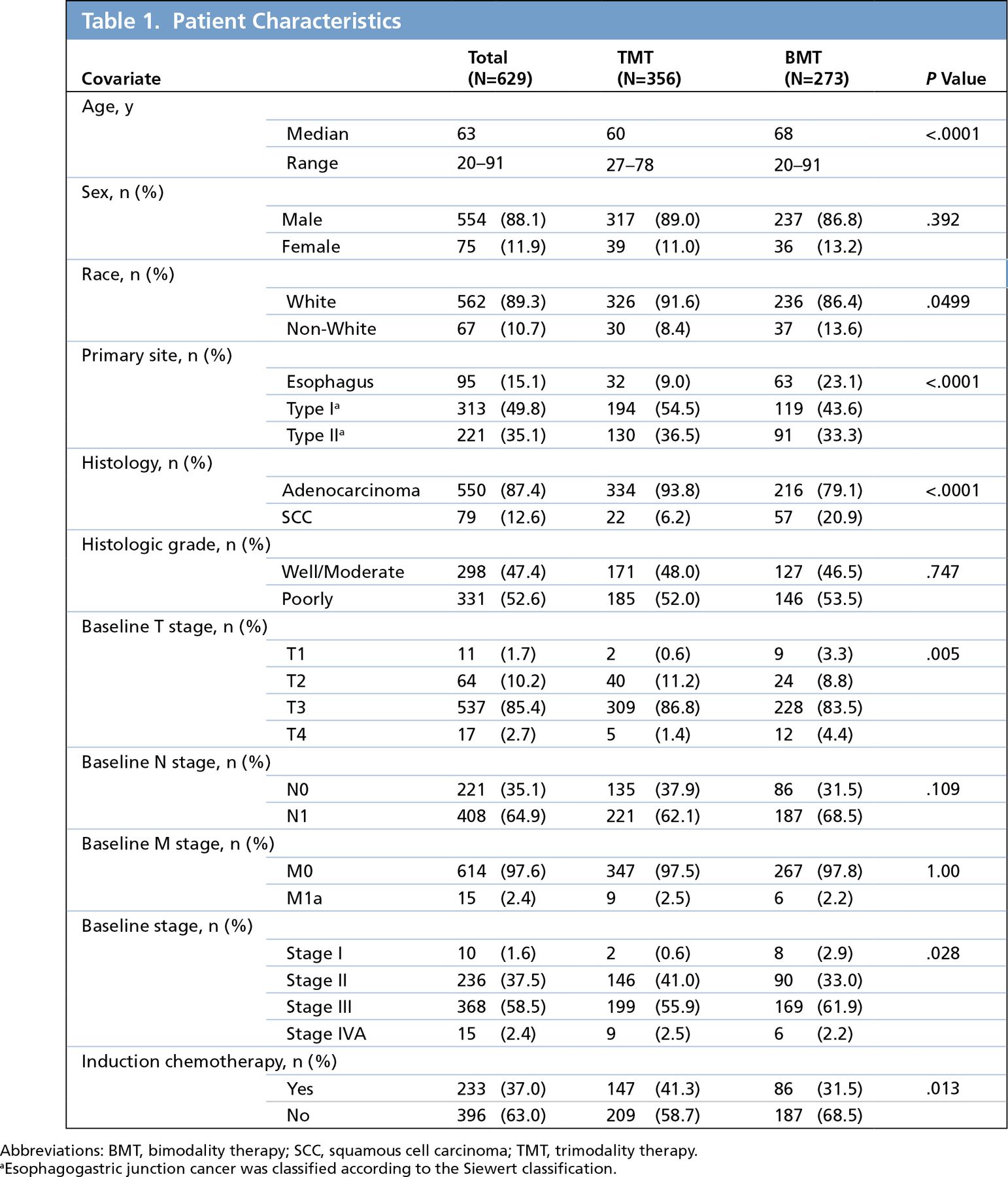 for DM shortly after local therapy. Currently, we lack any method to identify such patients, but if we could identify them, one strategy would be to delay their surgery and closely monitor them for DM. Another possible strategy would be to avoid chemoradiation in high-risk patients, because chemoradiation is associated with considerable morbidity.

Our current nomogram is far from ready for clinical implementation and should be considered only as the first step in a challenging process. The c-index based on the fitted model was 0.69 and the bootstrap bias-corrected c-index was 0.67, which were moderately good results in terms of predictive accuracy. Our nomogram will require independent validation 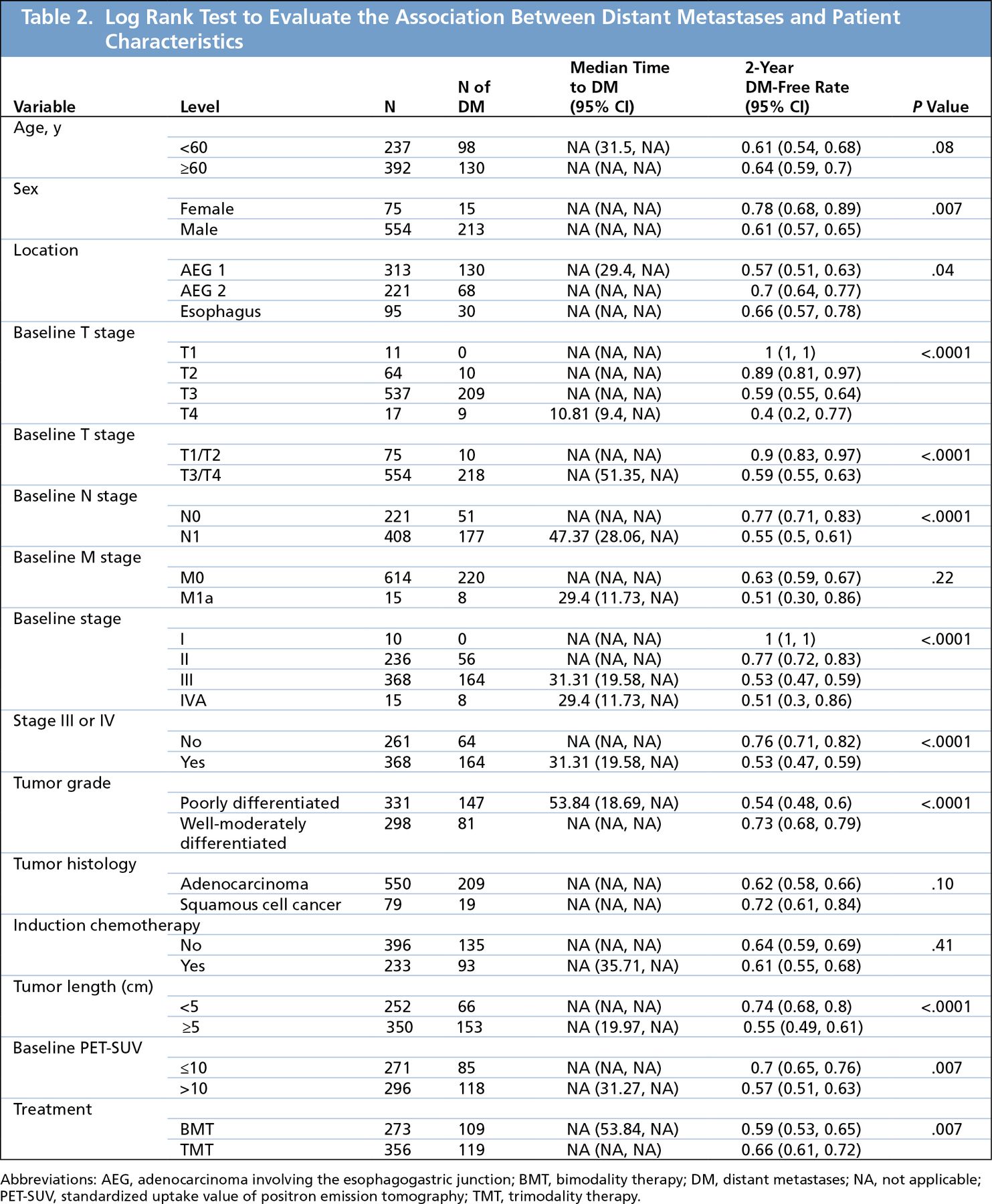 and further refinement, perhaps by the addition of tumor or blood biomarkers to improve its predictive accuracy. Acknowledging that surgery contributes immensely to the cure rate of patients with esophageal cancer,17,18 one would like to have a high level of predictive accuracy from the model to avoid undertreatment of patients who are likely to benefit from surgery.

This study's weaknesses are its retrospective nature and that it represents a single-institution analysis. The strength of our analysis is that it is the first demonstration that a nomogram based on clinical parameters can be established and that it is ready to be validated and refined. 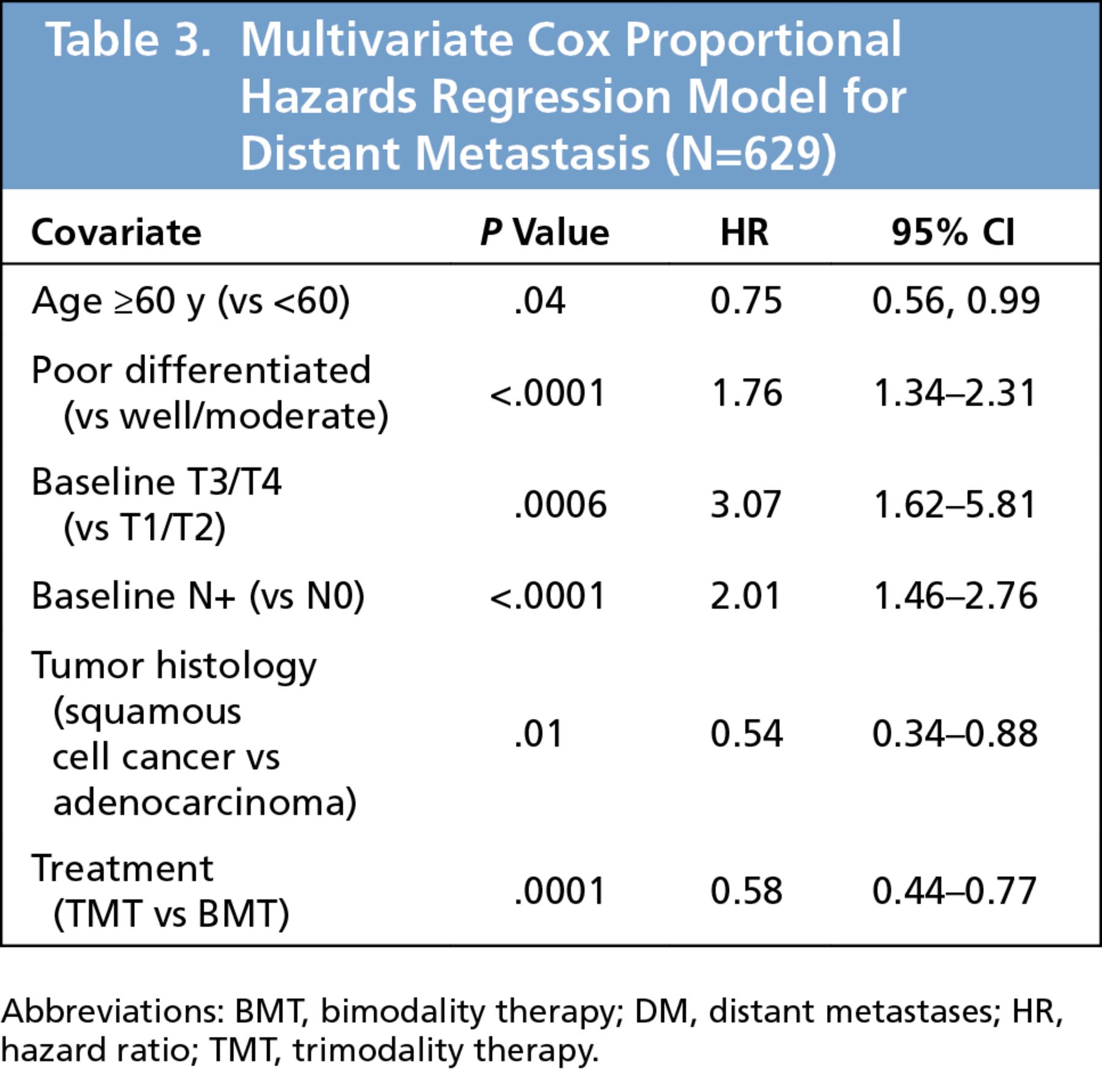 Our data suggest that younger men with baseline T3/4, N+, poorly differentiated esophageal cancer with adenocarcinoma who are treated with BMT/TMT are at high risk for developing DM. The nomogram presented can become useful for avoiding or delaying surgery in these patients if it can be validated and further refined. 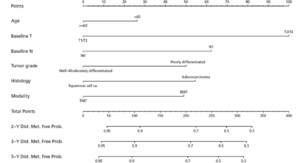