This activity has been designed to meet the educational needs of physicians, nurses, and pharmacists involved in the management of patients with cancer. There is no fee for this article. The National Comprehensive Cancer Network (NCCN) is accredited by the ACCME to provide continuing medical education for physicians. NCCN designates this journal-based CE activity for a maximum of 1.0 AMA PRA Category 1 Credit™. Physicians should claim only the credit commensurate with the extent of their participation in the activity. 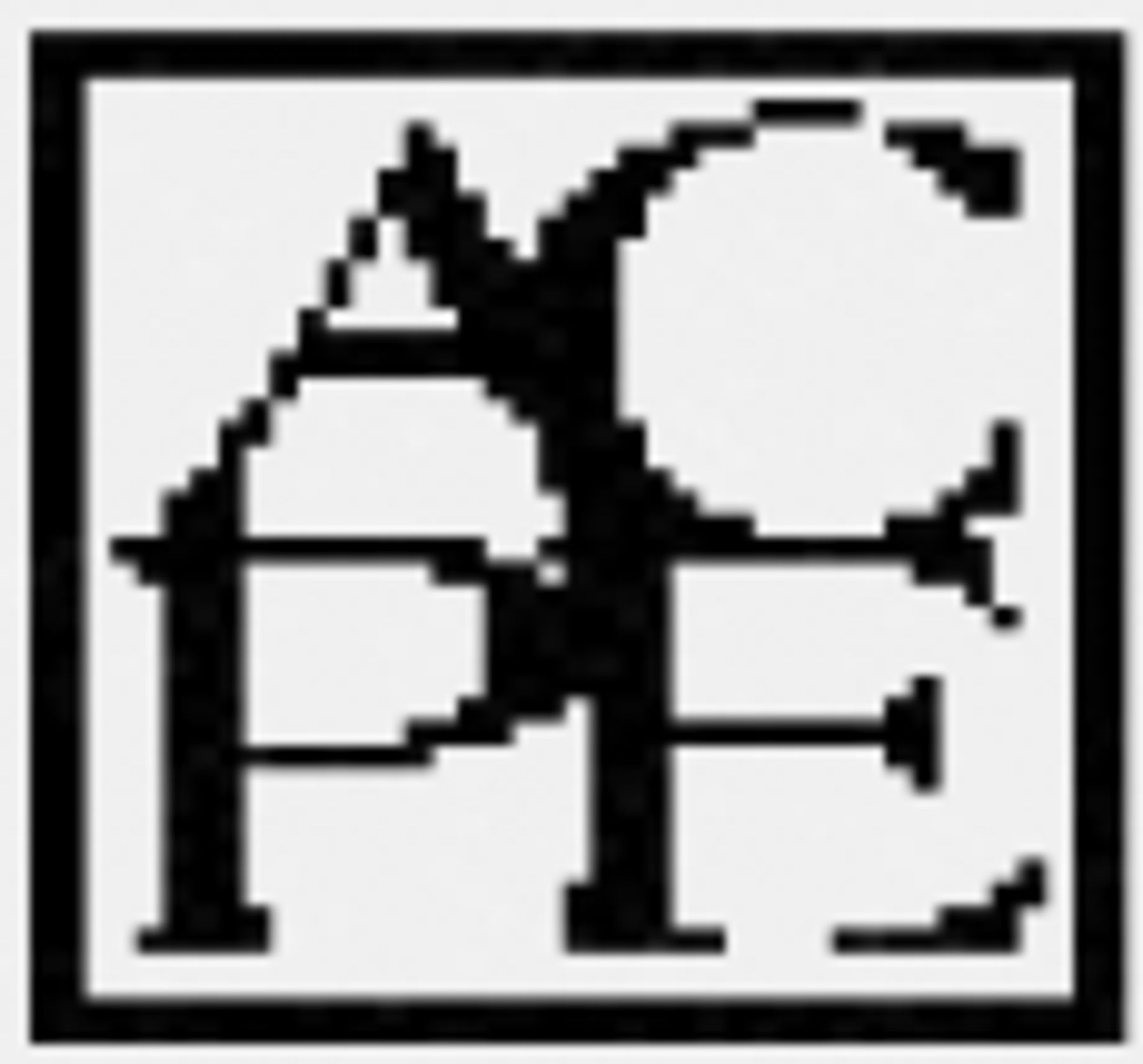 All clinicians completing this activity will be issued a certificate of participation. To participate in this journal CE activity: 1) review the learning objectives and author disclosures; 2) study the education content; 3) take the posttest with a 66% minimum passing score and complete the evaluation at http://education.nccn.org/node/78021; and 4) view/print certificate.

Family studies have long documented an increased risk of several forms of cancer among first- and second-degree relatives of affected individuals. These individuals may have an increased susceptibility to cancer as the result of one or more genetic mutations present in parental germline cells; cancers developing in these individuals may be classified as hereditary or familial cancers. Hereditary cancers are often characterized by mutations associated with a high probability of cancer development, vertical transmission through a parent, and an association with other types of tumors.1,2 They often have an early age of onset and exhibit an autosomal dominant inheritance pattern. Advances in molecular genetics have allowed researchers to identify a number of genes associated with inherited susceptibility to breast and/or ovarian cancers (eg, BRCA1/2, PTEN, TP53).

High-Risk Assessment: Breast and Ovarian focus primarily on assessment of mutations in the genes BRCA1/2, TP53, and PTEN. The main focus of these NCCN Guidelines is on the management of breast and ovarian cancer risk, and genetic testing and counseling in individuals with these particular genetic mutations. These guidelines were developed with an acute awareness of the preliminary nature of much of the knowledge regarding the clinical application of the rapidly emerging field of molecular genetics, and with an appreciation of the need for flexibility when applying these guidelines to individual families. They are intended to serve as a resource for health care providers to identify individuals who may benefit from cancer risk assessment and genetic counseling, to provide genetic professionals with an updated tool for the assessment of individual breast cancer and ovarian cancer risk and to guide decisions related to genetic testing, and to facilitate a multidisciplinary approach in the management of individuals at increased risk of hereditary breast and/or ovarian cancer.

Genetic testing is a complex process involving several phases. First, an initial risk assessment is performed to determine whether genetic assessment should be undertaken. Next, a patient would undergo a formal risk assessment, including a detailed family history, a personal medical and surgical history, a focused physical examination, and an evaluation of the patient's needs and concerns. Testing may be offered; counseling should be performed both before and after testing. Before the 2015 update, recommendations regarding testing and counseling principles (eg, consideration of cancer risk in relatives) were scattered throughout the guidelines, often as footnotes. For the 2015 guidelines update, much of this information was consolidated

and moved to a new set of pages titled “Principles of Cancer Risk Assessment and Counseling” (available online, in the full version of these guidelines, at NCCN.org [BR/OV-A]). Given the complexity of genetic testing and the rapid evolution of molecular diagnostics, the panel agreed that listing the principles on a single set of pages, as opposed to throughout the guidelines as footnotes, would clarify the panel's position on testing principles.

For the most recent guidelines update, the panel revised recommendations regarding multigene testing. Minor modifications were also made to testing criteria for genetic mutations, including clarification regarding ovarian cancer histology and revision of BRCA1/2 testing criteria for those with a personal history of pancreatic cancer and with Ashkenazi Jewish ancestry.

Next-generation sequencing allows for the sequencing of multiple genes simultaneously. In this approach, referred to as multigene testing, a set of genes that are associated with a specific family cancer phenotype or multiple phenotypes are simultaneously analyzed. The recent introduction of multigene testing for hereditary forms of cancer has rapidly altered the clinical approach to testing at-risk patients and their families. This approach may detect mutations not found in single-gene testing. Multigene testing could include only high-penetrance genes associated with a specific cancer, or both high- and moderate-penetrance genes. Comprehensive cancer risk panels, which include a large number of genes associated with a variety of cancer types, are also available.3

The NCCN Guidelines panel had added information regarding multigene testing for the 2014 update. This new section included a list of advantages and disadvantages of multigene testing, examples of when this testing may be particularly advantageous and cost-effective, and issues to consider (eg, clinical

implications of moderate-penetrance genes included in a panel). The panel also included recommendations for both the provider and laboratories. During the panel meeting for the 2015 update, several members noted that this section should be more concise, because some of the most important points were difficult to identify in the presented text. The panel's recommendations regarding multigene testing now more clearly emphasize the following (GENE-1, this page):

The panel also noted that multigene testing may include moderate-penetrance genes. Currently, there are limited data and no specific guidelines regarding degree of cancer risk associated with some moderate-penetrance genes and management for gene carriers.4–6 These issues are compounded by the low incidence rates of hereditary disease, making it difficult to conduct adequately powered studies.4 The approach to risk management after detection of a mutation in a moderate-risk gene and how best to communicate risk to relatives are currently unknown.7 Ideally, testing should only be performed for genes that are clinically actionable. The panel now provides recommendations regarding risk management

Based on these study findings, the following modifications were made to the genetic risk evaluation guidelines (BR/OV-1, page 155):

In these NCCN Guidelines, the panel focuses specifically on assessment of known high-penetrance mutations (ie, BRCA1/2, TP53, PTEN). In the 2014 update, the panel added CDH1, STK11/LKB1, and Lynch syndrome to the guidelines as other genes associated with increased breast and/or ovarian cancer risk. Although evidence is limited, other genes have been shown to be associated with increased cancer risk, including ATM, CHEK2, PALB2, BARD1, BRIP1, RAD51C, and RAD51D.

During the 2015 guidelines update meeting, the panel debated the possibility of including information and recommendations for these less common genes, including population frequency, estimated cancer risks, and management strategies. The panel ultimately decided that providing this amount of detailed information in the guidelines for all of the rare genes noted would be premature, given the current state of the evidence. Risk management recommendations should be evidence-based and matched to cancer risk and should only be made for genes that are clinically actionable. Because risk may differ between breast and ovarian cancers, different recommendations may need to be made for these 2 cancer types.

Based on this logic, the panel created a new table summarizing which gene mutations are associated with breast and/or ovarian cancer risk, and when breast MRI, risk-reducing mastectomy (RRM), and risk-reducing salpingo-oophorectomy (RRSO) should be recommended or considered (ADDIT-2, page 159). Breast MRI is recommended when the gene mutation is associated with at least a 20% lifetime risk of breast cancer. This threshold was identified in breast cancer risk models dependent on family history (see NCCN Guidelines for Breast Cancer Screening and Diagnosis and for Breast Cancer Risk Reduction for more information; available at NCCN.org).34,35 Most of the recommendations in this new table are extrapolated from BRCA studies, because no strong evidence exists regarding risk management recommendations for the other genes. Genes for which there is little to no existing evidence suggesting an association with breast and/or ovarian cancer risk are noted in a row titled “Insufficient evidence for intervention.” Intervention may be warranted based on family history or other clinical factors. The recommendations in this table can be used to inform which genes may be included in multigene testing (see earlier discussion).

Salpingectomy (surgical removal of the fallopian tube) has recently gained attention as a potential procedure to reduce the risk of ovarian cancer. Salpingectomy rates are increasing, especially in women younger than 50 years.36 Its use is supported by the finding that high-grade serous carcinomas may originate in the fallopian tube.37–39 This procedure allows patients to avoid the disadvantages of oophorectomy, such as lack of ovarian preservation and onset of early menopause.40 Salpingectomy has been shown to be a safe and feasible procedure when performed at the same time as hysterectomy.36,41

Despite evidence regarding the safety and feasibility of salpingectomy, more data are needed regarding its efficacy in reducing the risk of ovarian cancer.37,42 Furthermore, BRCA1/2 carriers who undergo salpingectomy without oophorectomy may not get the 50% reduction in breast cancer risk associated with oophorectomy. During the 2015 update meeting, a panel member presented data showing that, although ovarian carcinomas often originate in the fallopian tube, a significant minority (>20%) originates in the ovary.43–46 For these reasons, the panel included a statement that salpingectomy is not the standard of care, and risk-reducing salpingectomy alone or outside the context of a clinical trial is not recommended (HBOC-A, page 157).

In summary, the panel discussed several pertinent issues this year, including multigene testing, risk management recommendations for less common genetic mutations, and salpingectomy for ovarian cancer risk reduction. The panel also made the following changes to the 2015 recommendations:

The evidence base for genetic testing and counseling and risk assessment and management for hereditary cancer syndromes is rapidly evolving. It is essential for recommendations to reflect the current state of the evidence. 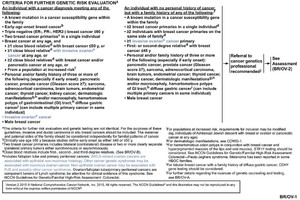 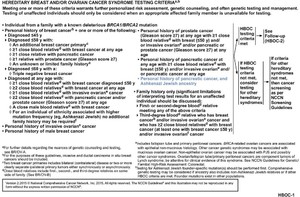 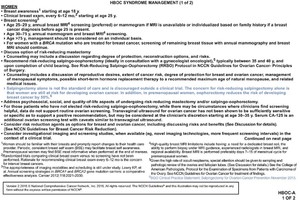 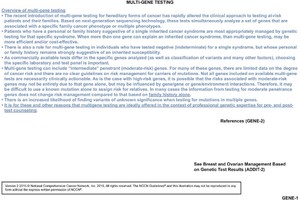 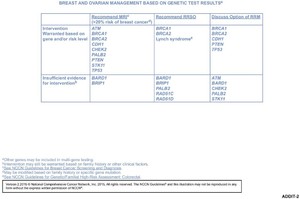