The current treatment paradigm for non–muscle-invasive bladder cancer (NMIBC) is directed at reducing cancer recurrence and preventing disease progression to more advanced stages. Historically, this has been accomplished through the use of bladder-sparing procedures, such as transurethral resection of bladder tumor (TURBT) and adjuvant intravesical chemotherapy or immunotherapy. Clinical T1 high-grade (T1HG) bladder cancer is a potentially lethal subtype of NMIBC that may benefit from more aggressive treatment in select patients.

Conservative management for T1HG bladder cancer frequently fails because of the many shared histopathologic and biological features with muscle-invasive tumors. Long-term rates of progression and cancer-specific mortality for T1HG bladder cancer are high (53% and 34%, respectively) from single-institutional series.1 In 2001, Herr et al1 suggested that early radical cystectomy (RC) may improve the survival of patients with high-risk superficial bladder tumors.2 Since then, interest in the role of RC and the genomic, clinical, and histopathologic predictors of survival in patients with high-grade NMIBC has intensified.3–12

Despite evidence suggesting survival benefit, the ideal use of RC in the management of high-risk NMIBC has not been adequately determined. One of the major reasons for this is the phenomenon of “denominator neglect” in the current literature; that is, the inability to quantify the number of patients with T1HG bladder cancer that may benefit from RC. However, urologists are beginning to recognize a particular “high-risk” subgroup of patients who may benefit from early RC: those with multifocal lesions, lymphovascular invasion (LVI), and early recurrence after immunotherapy.13,14 Accordingly, the American Urological Association and Society of Urologic Oncology recently released joint 2016 guidelines that recommend RC for these patients.

Therefore, the goals of our study were 3-fold: (1) establish the “at-risk” population of patients with T1HG bladder cancer and determine the subset of these patients receiving RC, (2) determine factors associated with patients receiving RC versus bladder-sparing procedures, and (3) describe the pathologic and oncologic outcomes associated with RC for T1HG bladder carcinoma as they relate to overall survival.

The National Cancer Data Base (NCDB) is a joint endeavor between the American Cancer Society and the American College of Surgeons. It is an oncology database abstracted from more than 1,500 Commission on Cancer (CoC)–accredited institutions and is well established as a means of assessing cancer quality and outcomes.15 Institutional Review Board exemption was granted from the host institution secondary to de-identified data.

All patients with bladder cancer in the NCDB from January 1, 1998, to December 31, 2012, were identified. Male and female patients were included in our analysis if they had clinical T1HG bladder cancer. All staging was defined by the AJCC 7th Edition. Clinical stage in the NCDB is based on examination under anesthesia and TURBT, whereas final pathologic stage is based on RC pathology. Urothelial histology was determined via ICD-O 3rd Edition codes 8120, 8122, 8130, and 8131. Variant histologic subtypes were excluded. “High-grade” cancer was defined as either poorly differentiated or undifferentiated histology, which corresponded to and was confirmed by WHO/International Society of Urological Pathology (ISUP) grades 2 and 3. Patients in this cohort with clinical metastatic disease (204 with N+ and 232 with M+) were excluded in order to isolate those eligible for curative surgery.

Surgical treatment was dichotomized to bladder-sparing procedures or RC. Bladder-sparing procedures included TURBT and partial cystectomy. Age was treated as a continuous variable and for analytic purposes was categorized into 4 even quartiles. Year of treatment was grouped into 3-year intervals to smooth for yearly variation when assessing trends: 1998–2000, 2001–2003, 2004–2006, 2007–2009, and 2010–2012. Facility type was determined via CoC accreditation status and dichotomized as either a community or an academic hospital. Time to RC was treated as a continuous variable and also dichotomized as less than or equal to 100 days from diagnosis, or more than 100 days from diagnosis. One-hundred days was chosen to allow for a 6-week course of intravesical therapy and follow-up cystoscopy after initial diagnosis.

The percentage of all patients with T1HG bladder cancer undergoing RC over time was determined for all patients treated at hospitals that reported at least 1 case from all 15 study years (1998–2012) to reduce bias from hospital drop-in/out in the database. This was necessary because NCDB data is collected from participating hospitals based on CoC accreditation status, which frequently changes over time.

Baseline demographic and cancer-related characteristics of patients who received bladder-sparing surgery or RC were compared. The years 2010–2012 were isolated as a contemporary cohort to best reflect current practice. Median age was compared using the Mann-Whitney test and categorical variables were compared via chi-square test. Nonparametric covariates' correlation was assessed with Spearman's rank test. Factors associated with receiving a RC were examined using a mixed-effects logistic regression analysis, with hospital as a random effect and all other covariates as fixed effects.

Within the RC cohort, pathologic outcomes such as positive surgical margin (PSM) rate, LVI, and lymph node (LN) positivity were quantified. All pathologic outcomes for this cohort were from the RC bladder specimen. To adjust for differences in final pathologic staging, PSM rate and LN positivity were stratified via final pT classification. Oncologic quality indicators were also assessed, such as the use of LN dissection (LND) and administration of perioperative systemic chemotherapy.

PSM rates for organ-confined and extravesical (pT3–4) disease were found to be 5.5% and 19.9%, respectively. Percentages of patients with LVI and positive LNs each increased with advancing pathologic T classification (Table 3). Most patients did not receive any form of systemic chemotherapy perioperatively (70.4%).

The Kaplan-Meier method was used to assess survival in patients with T1HG bladder cancer undergoing RC (Figure 1). The 1- and 3-year overall survival rates for all patients treated with RC were 0.89 (95% CI, 0.87–0.90) and 0.68 (95% CI, 0.65–0.72), respectively. Cox proportional hazards regression (Table 4) demonstrated increased hazard of death for several factors, including increasing 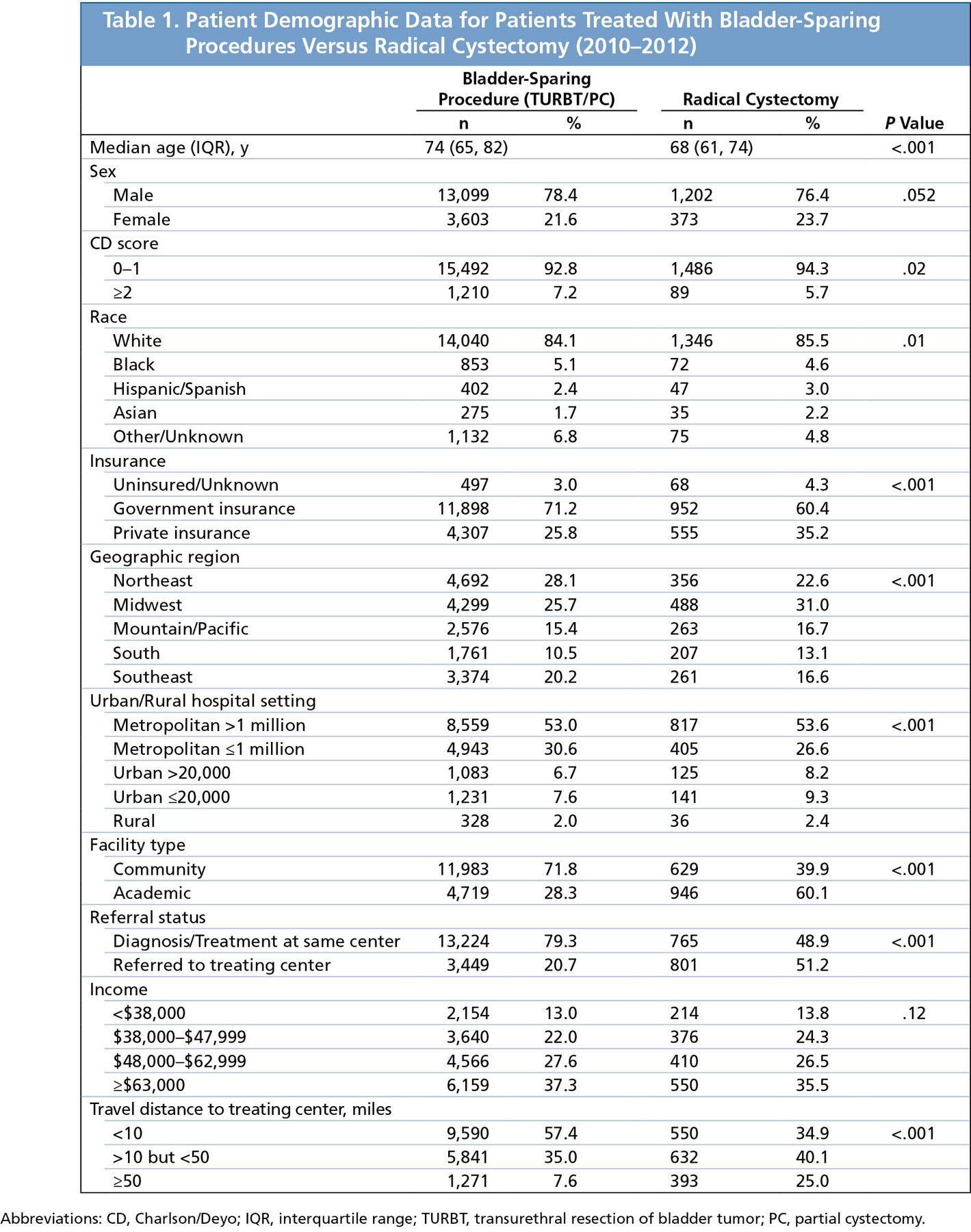 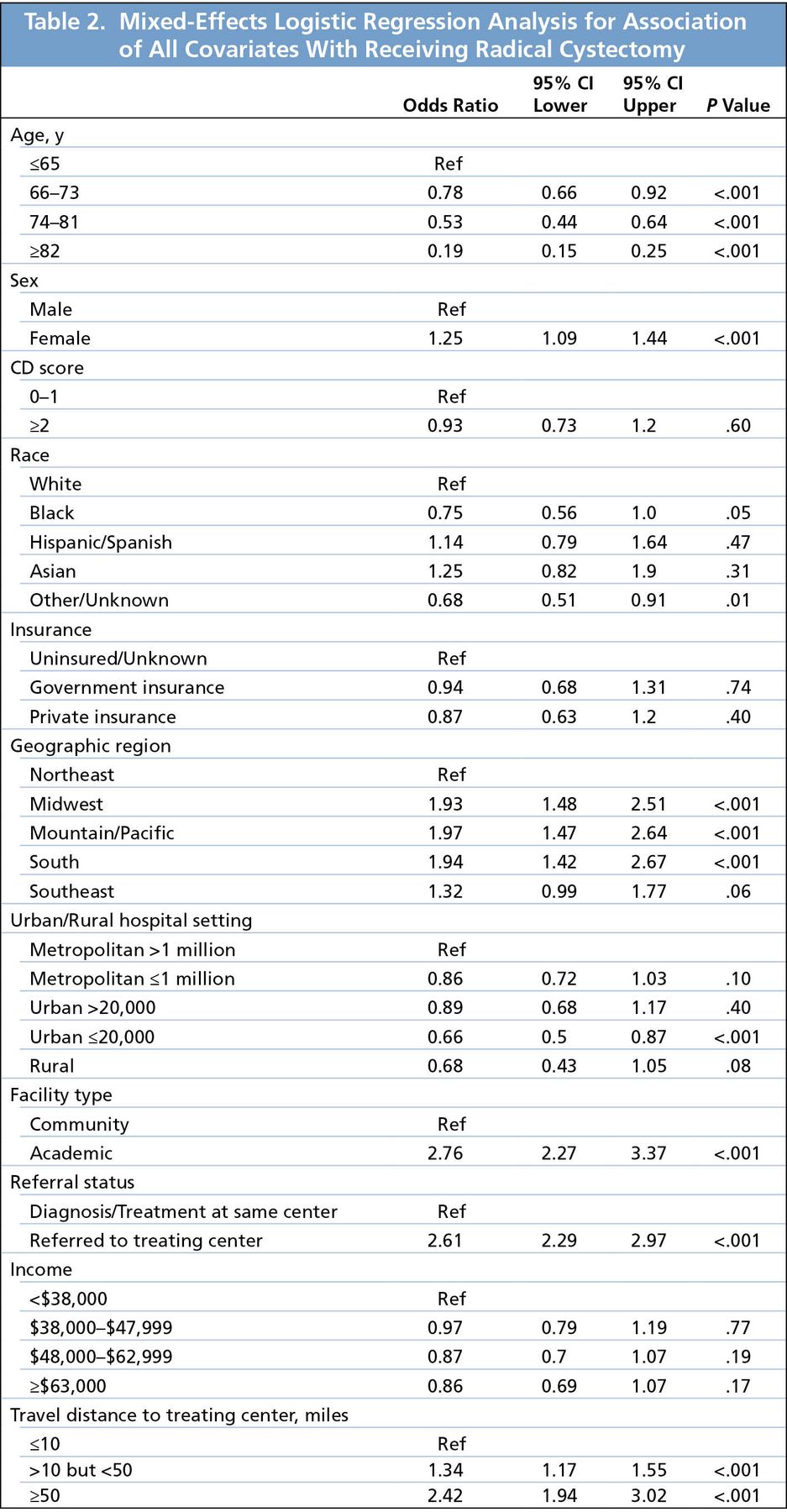 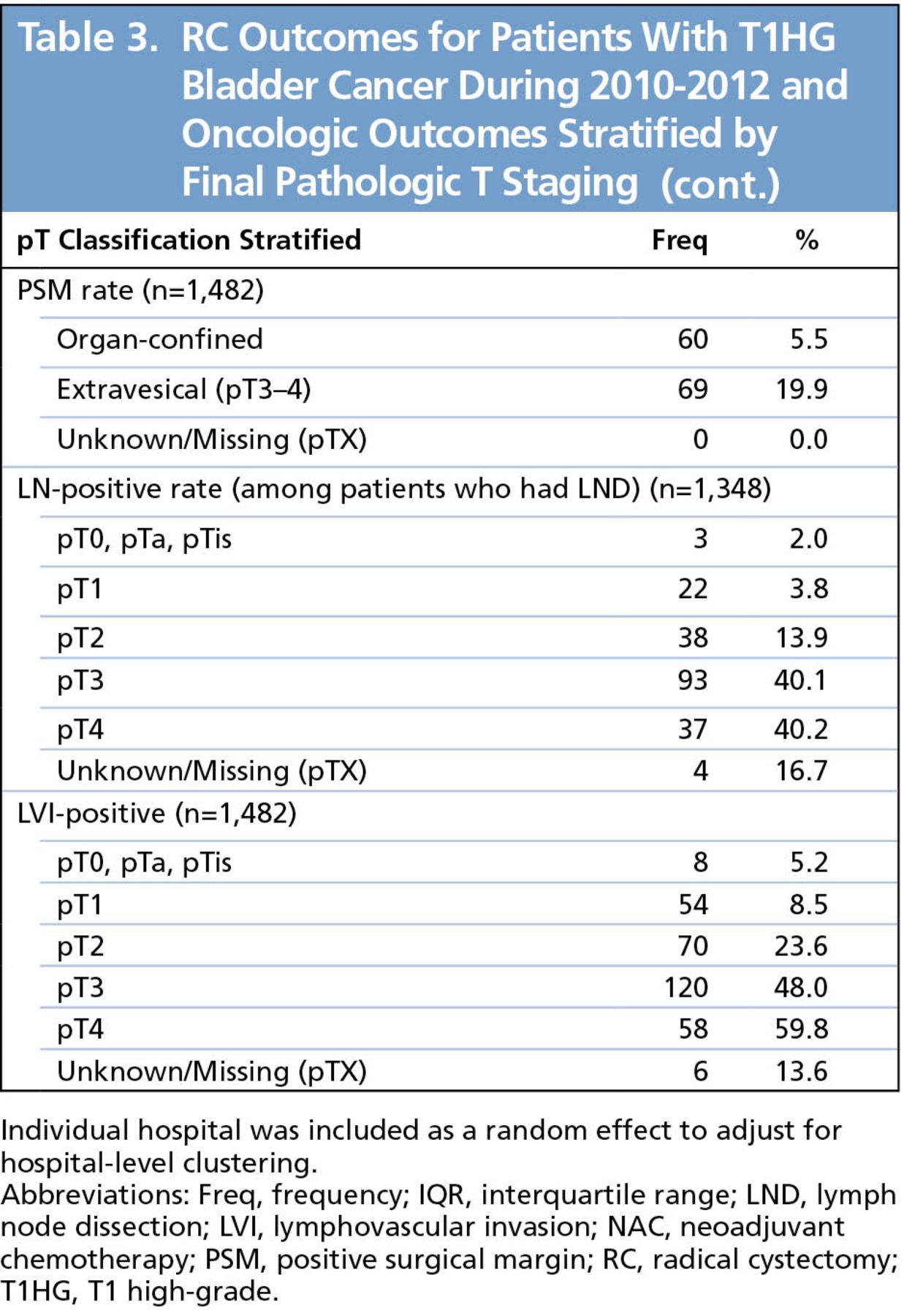 Due to the high risk of upstaging, “early” cystectomy has become an important therapy in high-risk NMIBC. Yet, the criteria by which to recommend RC has not been fully described. Several small series have previously described mortality rates and outcomes in highly selected samples.1,6,16 It was our goal to quantify the population of patients with T1HG bladder cancer, identify how common RC has become in their management, examine factors associated with patients receiving RC, and assess oncologic and survival outcomes of this group on the national level.

The first major finding of this study was establishing a contemporary population-level prevalence estimate of T1HG bladder cancer among all patients with bladder cancer (15.35 ± 0.19%). Prior estimates of 5% to 20% are nearly 2 decades old and limited to the subset of patients with NMIBC, not specifically

T1HG bladder cancer.17 We also were able to estimate a nationwide percentage of patients with T1HG bladder cancer who were treated with RC; a figure that has been previously unquantified. Further, we demonstrated that this rate has increased over the last decade, likely reflecting the evolving approach to T1HG bladder cancer as we've improved our biological understanding18 of the disease process.

Overall, few patients with T1HG bladder cancer underwent RC as definitive treatment. Although the ideal percentage is unknown, the percent of patients who were upstaged (41.0%) or had positive nodes (12.7%) is concerning. The rate of upstaging seen in our cohort (41.0%) is higher than rates of upstaging at re-TURBT (17%–29%),19,20 but similar to prior RC studies in high-risk NMIBC (40%).21 These rates of RC in both studies may be higher due to the inherent limitation of routine TURBT to treat deep or extravesical pathology, similar to what is seen with bacillus Calmette-Guérin (BCG) failure. We hypothesized that patients not treated with RC died of metastatic bladder cancer. Unfortunately, cancer-specific mortality is not available from our NCDB data set.

When comparing the patients who were managed with bladder-sparing procedures or RC, there were several notable findings. Patients treated with RC were more often younger and healthier; this is reasonable because most would advocate for aggressive surgery in patients who will derive the greatest survival benefit, and therefore this represents selection bias. However, on regression analysis, increasing age but not higher CD score remained significantly associated with a lower likelihood receiving RC. Interestingly, women had a higher odds of receiving RC (OR, 1.25; 95% CI, 1.09–1.44) with all other covariates held constant. Surgeons may approach T1HG in women more aggressively given the evidence of higher mortality rates for women with bladder cancer.22 Referral to a patients' definitive treating hospital was also highly associated with receiving RC (OR, 2.61; 95% CI, 2.29–2.97). This may represent either patient or referring urologist preference for aggressive therapy that may not have been offered elsewhere.

No comparison of survival between the bladder-sparing and RC groups was made in our cohort, because there is inherent selection bias inextricable in retrospective data, even with propensity score adjustment. However, an all-cause mortality estimate for those with T1HG undergoing RC (76.5% at 2 years) is similar to previously described multicenter results from Canada.16 Cancer-specific survival is not collected in the NCDB, and therefore we are unable to determine how many patients died of bladder cancer in the bladder-sparing cohort who may have benefited from RC.

Accurate and uniform staging of patients with T1 disease remains a problem. Understaging (10% of T1 reclassified as ≥T2) and disagreement (50% variation among T1HG specimen) among pathologists have been demonstrated in a large European study of bladder cancer with centralized review.23 LVI, tumor size, and multifocal disease have been suggested to be relative indications for RC.9 In our cohort, 20.6% of patients had LVI (on RC pathology), which was found to significantly influence survival (HR, 1.63; 95% CI, 1.18–2.25). This worse hazard for death is similar to that in multiple other series9,24,25 and must be considered when counseling patients with T1HG bladder cancer. Use of LND, even in patients with node-negative disease, provided a survival benefit (HR, 0.53; 95% CI, 0.35–0.80); a novel finding in our knowledge of T1HG bladder cancer.

We were unable to accurately determine the number of patients who definitively received BCG prior to RC. Therefore, it must be acknowledged that we cannot discriminate between true “early cystectomy” and cystectomy for BCG failure in this cohort. Regardless, given the absence of a randomized controlled trial comparing upfront RC with BCG, these data may provide an outcomes benchmark estimation of RC, in general, for T1HG bladder cancer. Many previous studies have closely examined patients who had RC after BCG failure and demonstrated equivocal rates of upstaging in both groups.6

The high rates (12.7%) of node-positive disease and upstaging (41.0%) in this cohort should be heavily weighed during patient counseling.

Unfortunately, there is no information collected in the NCDB regarding the number of TURBTs completed or stage at first presentation. The clinical stage documented in the NCDB is the most advanced found prior to the most definitive treatment. Further, this does not allow us to establish which patients had T1HG disease on initial presentation, had recurrent disease, or experienced disease progression. We also do not know who had a re-TURBT, and therefore may have an indeterminate number of patients understaged as a result. The importance of re-resection cannot be understated20 and may have affected our results. However, the data will reflect the use of TURBT as it relates to general practice rather than simply high-volume centers, making it more translatable.

RC is used in 10% of patients with T1HG bladder cancer in a large, contemporary, multi-institutional cohort. Treating hospital characteristics and patient factors such as sex and age are significantly associated with patients receiving RC. Among those patients, 20.6% have LVI, 41% are upstaged, and roughly 12.7% have positive nodes at the time of RC. Future studies are necessary to identify clinicopathologic biomarkers that risk-stratify patients with T1HG to treatment tailored to their risk status. 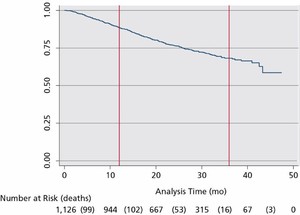