Background: The circumferential resection margin (CRM) is a significant prognostic factor for local recurrence, distant metastasis, and survival after rectal cancer surgery. Therefore, availability of this parameter is essential. Although the Dutch total mesorectal excision trial raised awareness about CRM in the late 1990s, quality assurance on pathologic reporting was not available until the Dutch Surgical Colorectal Audit (DSCA) started in 2009. The present study describes the rates of CRM reporting and involvement since the start of the DSCA and analyzes whether improvement of these parameters can be attributed to the audit. Methods: Data from the DSCA (2009–2013) were analyzed. Reporting of CRM and CRM involvement was plotted for successive years, and variations of these parameters were analyzed in a funnelplot. Predictors of CRM involvement were determined in univariable analysis and the independent influence of year of registration on CRM involvement was analyzed in multivariable analysis. Results: A total of 12,669 patients were included for analysis. The mean percentage of patients with a reported CRM increased from 52.7% to 94.2% (2009–2013) and interhospital variation decreased. The percentage of patients with CRM involvement decreased from 14.2% to 5.6%. In multivariable analysis, the year of DSCA registration remained a significant predictor of CRM involvement. Conclusions: After the introduction of the DSCA, a dramatic improvement in CRM reporting and a major decrease of CRM involvement after rectal cancer surgery have occurred. This study suggests that a national quality assurance program has been the driving force behind these achievements.

Scatterplots showing the mean percentage and hospital variation of patients with a reported circumferential resection margin (CRM) in (A) 2009, (B) 2011, and (C) 2013. 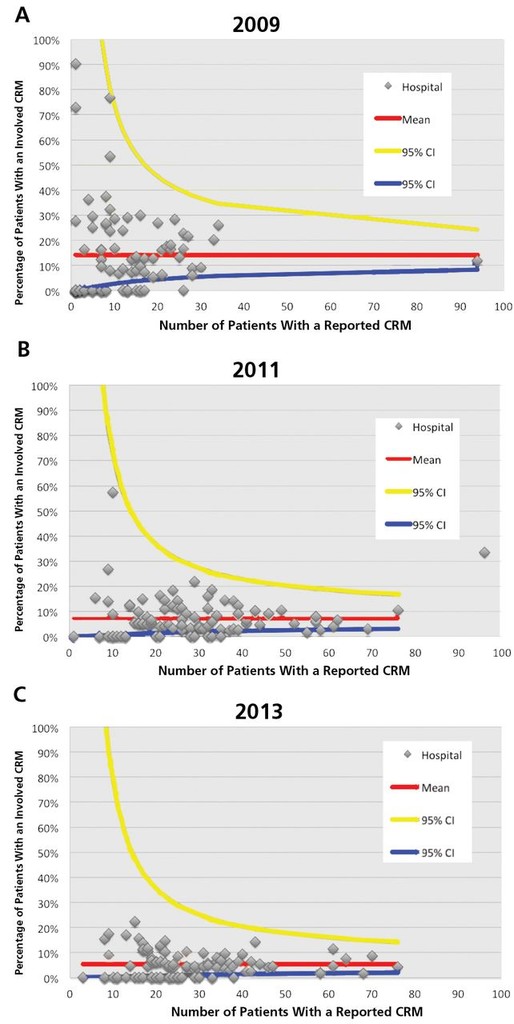 Funnelplot showing the case-mix–corrected percentage of patients with an involved circumferential resection margin (CRM) per hospital in (A) 2009, (B) 2011, and (C) 2013. 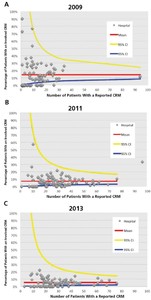