Purpose: Persistent pain after breast cancer treatment (PPBCT) affects 25% to 60% of breast cancer survivors and is recognized as a clinical problem, with 10% to 15% reporting moderate to severe pain several years after treatment. Psychological comorbidity is known to influence pain perception, and evidence links signs of depression and anxiety with development of PPBCT. The purpose of this study was to assess preoperative distress as a predictive factor for development of PPBCT. Methods: Between October 2008 and October 2009, 426 women diagnosed with primary breast cancer, undergoing surgery at the Department of Breast Surgery, Rigshospitalet, Denmark, were invited to participate in the study. Patients filled out a questionnaire preoperatively, and 4 and 8 months after surgery. Preoperative distress was measured with the Distress Thermometer (DT; 11-point scale, 0–10). We examined the association between severe preoperative distress (using DT ≥7) and moderate to severe PPBCT 8 months after diagnosis using a logistic regression model. Results: A total of 357 patients participated in this study and 291 (82%) returned all follow-up questionnaires. Preoperative distress was significantly associated with moderate to severe PPBCT at 8 months, with an adjusted odds ratio (OR) of 2.05 (95% CI, 1.18–3.59; P=.01), and at 4 months, with an OR of 2.23 (95% CI, 1.23–4.05; P=.01). Conclusions: Preoperative distress was associated with PPCBT, suggesting distress as an independent risk factor for PPBCT. Preoperative identification of patients at risk for PPBCT allows for further research in psychological and pharmacological treatment of this condition. 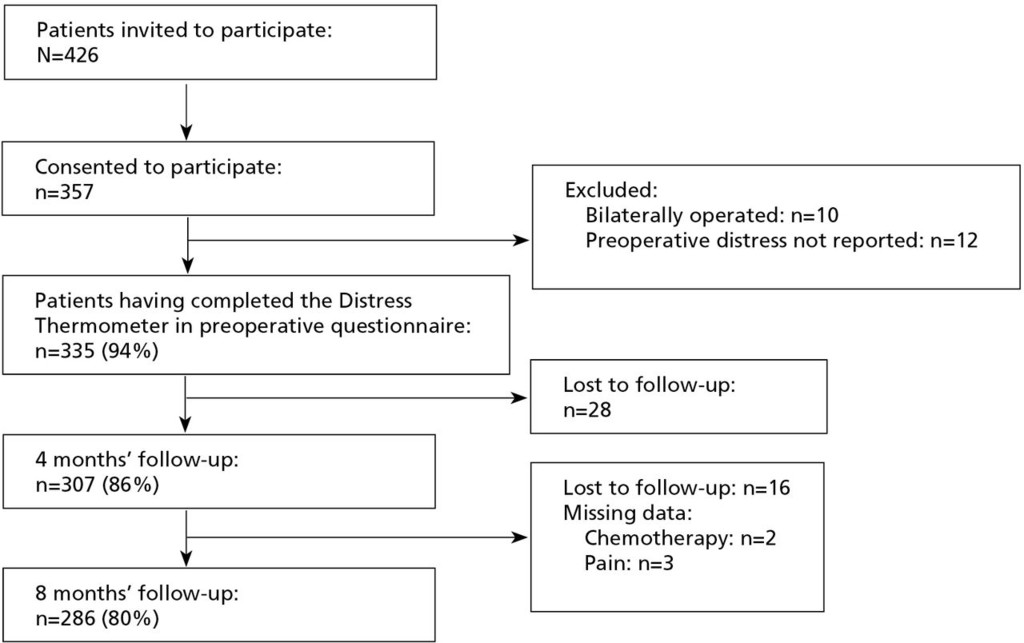 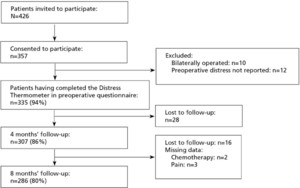