Background: Evidence guiding adjuvant chemotherapy (AC) use after lobectomy for stage I non–small cell lung cancer (NSCLC) is limited. This study evaluated the impact of AC use and tumor size on outcomes using a large, nationwide cancer database. Methods: The effect of AC on long-term survival among patients who underwent lobectomy for margin-negative pathologic T1–2N0M0 NSCLC in the National Cancer Data Base from 2003 to 2006 was estimated using the Kaplan-Meier method. The specific tumor size threshold at which AC began providing benefit was estimated with multivariable Cox proportional hazards modeling. Results: Overall 3,496 of 34,360 patients (10.2%) who met inclusion criteria were treated with AC, although AC use increased over time from 2003, when only 2.7% of patients with tumors less than 4 cm and 6.2% of patients with tumors of 4 cm or larger received AC. In unadjusted survival analysis, AC was associated with a significant 5-year survival benefit for patients with tumors less than 4 cm (74.3% vs 66.9%; P<.0001) and 4 cm or greater (64.8% vs 49.8%; P<.0001). In subanalyses of patients grouped by strata of 0.5-cm increments in tumor size, AC was associated with a survival advantage for tumor sizes ranging from 3.0 to 8.5 cm. Conclusions: Use of AC among patients with stage I NSCLC has increased over time but remains uncommon. The results of this study support current treatment guidelines that recommend AC use after lobectomy for stage I NSCLC tumors larger than 4 cm. These results also suggest that AC use is associated with superior survival for patients with tumors ranging from 3.0 to 8.5 cm in diameter. 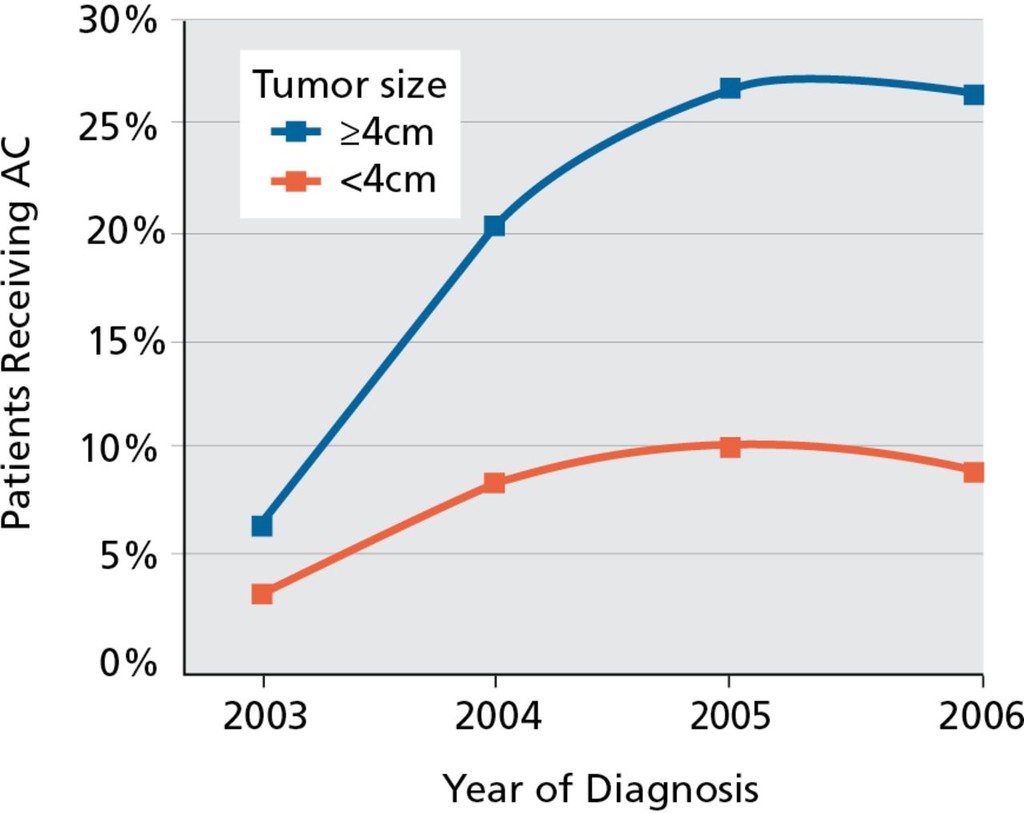 Trends in use of adjuvant chemotherapy (AC) by tumor size during the study period (2003–2006). 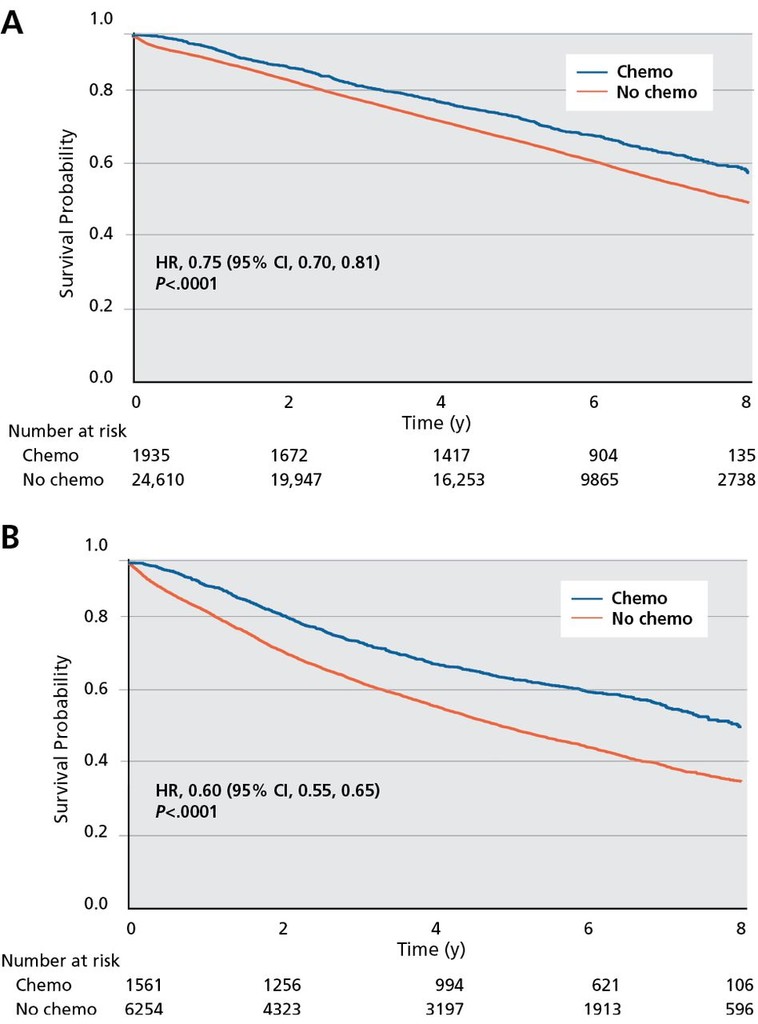 Kaplan-Meier survival curves for tumors (A) less than 4 cm and (B) 4 cm or greater. 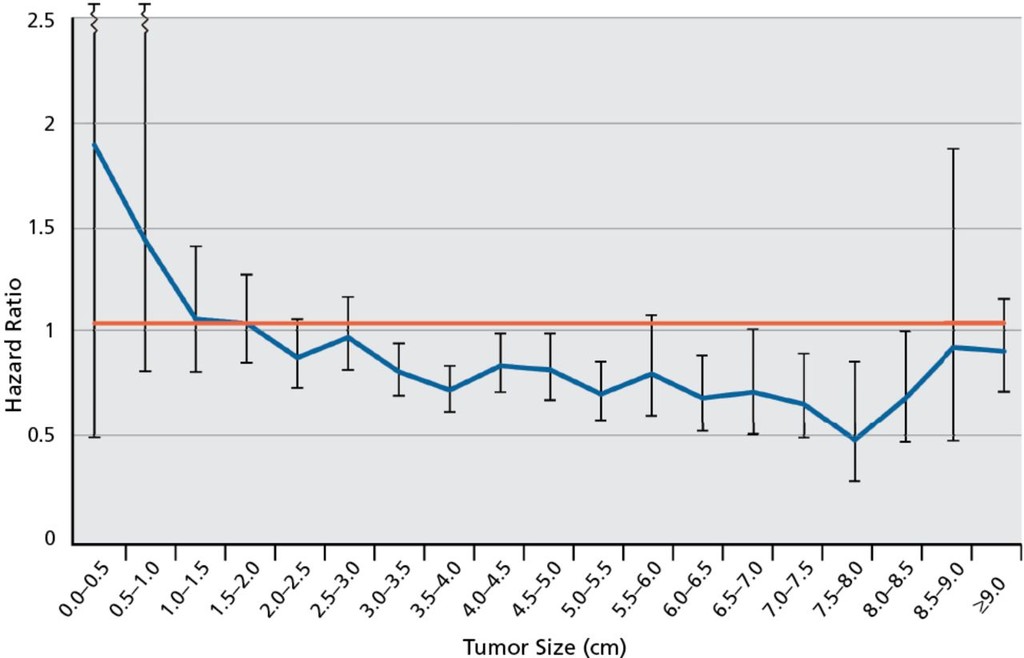 Plot of adjusted hazard of death associated with adjuvant chemotherapy after lobectomy for T1–2N0 grouped into strata by tumor size. The hazard ratios were determined from multivariable survival models performed on subsets of patients created by grouping the entire cohort by strata of tumor size in 0.5-cm increments. 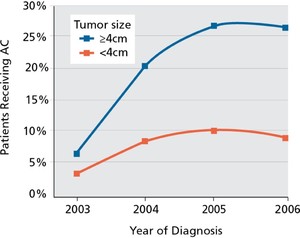 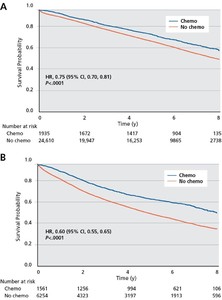 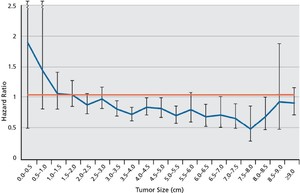