Langerhans cell histiocytosis (LCH) is a rare proliferative disease with a wide spectrum of clinical presentations and, as a consequence, the treatment choice is unclear. Recently, detection of the BRAF V600E mutation changed the perspective of this disease, suggesting a possible use for BRAF inhibitors in its treatment. Herein, a case is presented of a patient with LCH undergoing treatment with vemurafenib after several lines of therapy. After 4 months of vemurafenib treatment, skin lesions associated with cranial involvement were reduced in size at physical evaluation and nuclear imaging assessment showed a very good partial response, with the resolution of multiple lesions. Based on this very good partial response and because the patient tolerated treatment well, the patient was able to continue treatment with vemurafenib until disease progression nearly 10 months later. This approach should be considered for patients with severe and multiresistant LCH with a BRAF mutation. However, more studies are needed to evaluate the efficacy and duration of response in a larger patient population.

Langerhans cell histiocytosis (LCH) is a rare proliferative disease characterized by the presence of large and mononuclear cells that are normally involved in the antigen-presenting function. These cells are defined by the positivity of CD1a, CD68, S100, and CD207 at immunohistochemistry.1 In lesions, LCH cells are included in a particular microenvironment, which is made of T cells, macrophages, and eosinophils that support disease progression through a local production of cytokines.2 The prevalence of LCH is higher in childhood but not exclusive to this period.3 In adults, the diagnosis is made typically between the 5th and 7th decades of life, with both sexes being equally affected.4

Clinical presentation at diagnosis is heterogeneous and includes many different symptoms, according to organs or tissues involved. The disease can be localized, with a good prognosis, or can be multifocal or multisystemic, with a lower survival rate, especially when high-risk organs are involved (eg, lung, spleen, liver, bone marrow).5 Patient stratification into high- and low-risk groups is very important to increase response rate in multisystemic disease and reduce overtreatment in single sites.6 Local treatment, such as a surgical excision or intralesional injection, is indicated when the disease is monofocal. Alternately, when a patient presents with multifocal localization or multisystemic disease, systemic therapy should be considered. Because of the rarity of this disease and its wide spectrum of clinical presentations, many aspects of patient management are still controversial and a matter of debate. Diagnosis and treatment recommendations and guidelines, based on agreement between experts in the field, have been recently published for adults7 and for use in the pediatric8 setting.

A series of clinical trials by the Histiocyte Society considered vinblastine plus prednisolone in combination with either etoposide, 6-mercaptopurine, cladribine, cytarabine, or methotrexate first-line therapy in high-risk patients.9,10 Intensive combination chemotherapy, such as a weekly MACOP-B (doxorubicin, methotrexate, cyclophosphamide, vincristine, prednisone, and bleomycin) regimen or stem cell transplantation, has shown promising results.11

Difficulties in treatment decision, especially for patients experiencing disease reactivation after previous systemic therapy, show a need for new therapeutic approaches against new targets within Langerhans cells or their tumor microenvironment, or the intralesional “cytokine storm.” Recently, detection the BRAF V600E mutation changed the perspective of LCH, suggesting a possible use of BRAF inhibitors (ie, vemurafenib) in its treatment.12,13

A previously healthy 40-year-old woman presented with polyuria with associated polydipsia in November 1998. Nuclear imaging revealed a pituitary mass, later confirmed with bone scintigraphy, that showed enhancement of the petrosal ridge with pituitary involvement. A biopsy was performed on the tissue above the bone labyrinth, and a diagnosis of LCH was made. As first-line treatment, the patient underwent surgical excision and received 30 Gy of radiotherapy to the right petrous region and the infundibulum.

Because of disease recurrence in the mastoid and sella turcica regions after a few months, the patient was then treated with a polychemotherapy regimen (MACOP-B) and experienced a partial response. She remained clinically stable until 2005, when a PET scan showed a skeletal recurrence (ilium, ischium, left clavicle, and right petrous region with fistulisation to the skin) with hepatic infiltration and nodal involvement. The patient was treated with weekly induction therapy (VNCOP-B [doxorubicin, cyclophosphamide, vincristine, prednisone, and bleomycin]), and experienced a partial response. She was then started on a high-dose therapy program with 2 cycles of IEV (ifosfamide, epirubicin, and etoposide) therapy and the collection of peripheral blood stem cells. Unfortunately, she could not terminate the autologous stem cell transplantation because of a severe QT prolongation during induction therapy with BEAM (carmustine, etoposide, cytarabine, and melphalan).

In March 2013, after PET revealed further disease progression, the patient was treated with 6 cycles of bendamustine, with no result. In November 2013, after testing positive for the BRAF V600E mutation, she was started on therapy with vemurafenib. Before treatment initiation, a clinical examination revealed the presence of multiple fistulisations of cranial lesions (Figure 1A) associated with bilateral cervical lymphadenopathies. Laboratory results showed a severe increase in the lactate dehydrogenase (LDL) level (448 U/L) and hepatic and cholestatic values (alanine aminotransferase [ALT], 56 U/L; alkaline phosphatase [ALP], 648 U/L; γ-glutamyl transferase [GGT], 2273 U/L), suggestive of disease infiltration to the liver. PET scan showed multiple standardized uptake value (SUV) positivities related to skeletal, hepatic, and nodal disease involvements. Vemurafenib was requested pursuant to off-label use, and was administered daily at 1920 mg/d. Treatment was well-tolerated, with the onset of an oral hyperkeratotic lesion the sole reported toxicity. Biopsy of this lesion showed human papillomavirus, which was reversible with a dose reduction of vemurafenib to 1440 mg/d. During therapy with vemurafenib, the patient underwent clinical, laboratory, and dermatologic monitoring every 21 days. After only 3 weeks of treatment, an improvement in bone pain was reported.

After 4 months of therapy on vemurafenib, the patient was evaluated. Findings of a physical evaluation showed a reduction in the skin lesions associated with cranial involvement (Figure 1B), and their appearance was less deep and wide. Results of laboratory tests showed a decrease in LDH levels (249 U/L) and hepatic and cholestatic values (ALT, 38 U/L; ALP, 580 U/L; GGT, 1906 U/L). Lastly, a PET scan performed during the fourth month of vemurafenib therapy was compared with the baseline scan performed in November 2013, showing a complete normalization of skeletal positivities at cranial lesions, clavicula, femur, and ischium in addition to a reduction in the ilium and sacrum. The nodal and hepatic SUV were

also normalized (Figure 2). Based on this very good partial response and because treatment was well tolerated, the patient continued therapy with vemurafenib until September 2014, when disease progression was documented both clinically (worsening pain at the rib cage, consistent with the presence of bilateral lithic costal lesions) and on PET scan (reappearance of hypermetabolic lesions at the skull vertex). Treatment with vemurafenib was stopped, and the patient was initiated on watchful waiting. The patient gave informed consent for publishing her data.

BRAF is a serine threonine kinase that represents an important component of the Ras/Raf/MEK signaling cascade. Activated by an extracellular signal (growth factors, cytokines, hormones), this pathway induces cell survival, proliferation, differentiation, and motility.14 The Val to Glu replacement at position 600 determines a BRAF constitutive activation independently of extracellular signals.15 The BRAF mutation is detected in many malignant diseases, including primary melanoma, hairy cell leukemia, papillary thyroid carcinoma, colorectal cancer, and in approximately 50% of patients with LCH.16 This

positivity suggests a neoplastic origin of the disease, not only an inflammatory or reactive pathogenesis.

Based on this evidence, the inhibitor of mutated BRAF, vemurafenib, has been used in the treatment of patients with LCH. Only one report in the literature was found that describes the efficacy of the BRAF inhibitor in 3 patients with multisystemic and refractory LCH; in all cases, vemurafenib therapy led to a rapid clinical, histologic, and morphologic (PET) response.12 Vemurafenib was initially administered at 1920 mg/d orally, until cutaneous side effects required a dose reduction to 960 mg/d. The treatment was generally well tolerated and no other adverse events were observed.12 In the present patient diagnosed with LCH with a BRAF mutation, the efficacy of vemurafenib in LCH was confirmed. First, a rapid response was seen in clinical manifestations of the disease, with resolution of bone pain and an objective reduction of cranial lesions after a few weeks of treatment. Second, results of laboratory tests revealed a decrease in hepatic and cholestatic levels, suggesting a reduction of disease infiltration into the liver. Lastly, results of a PET scan after 4 months of treatment showed a very good partial response, with the resolution of multiple lesions (skeletal, nodal, and hepatic) and an important SUV reduction in the residual positivities.

The present patient was evaluated with a PET scan because this modality has already been defined as being sensitive to LCH lesions that cannot be found with other imaging modalities.17 The role of PET is important during staging to define the patient's risk and thus to make the appropriate therapeutic choice, and in further follow-up to define response to therapy.18 Vemurafenib showed efficacy in PET positivity after 4 months; a response this rapid has not been documented previously in PET assessment of other treatments for LCH.19

The BRAF V600E mutation can be considered a possible target in the therapy of patients with LCH, such as with melanoma and hairy cell leukemia. During vemurafenib treatment, a rapid regression of symptoms and a dramatic response in terms of extension and SUV uptake on PET scan were observed. Treatment was well tolerated, and the most important toxicity occurred at the cutaneous level.

Because of the limited experience with BRAF inhibitors in LCH, no consensus exists on when and how to test patients for BRAF mutations. However, it is advisable that all patients with a refractory and heavily pretreated systemic disease, for whom an approach based on novel targeted agents can be pursued, have BRAF mutations identified before treatment initiation. More studies are needed to evaluate the efficacy and safety of BRAF inhibitors in a larger patient population.

Skin lesions (A) before and (B) after 4 months of vemurafenib treatment.

Comparison of PET scans (A) before and (B) after 4 months of vemurafenib treatment. 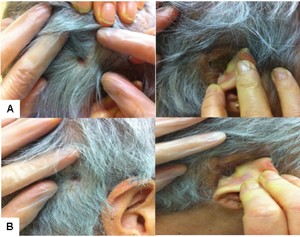 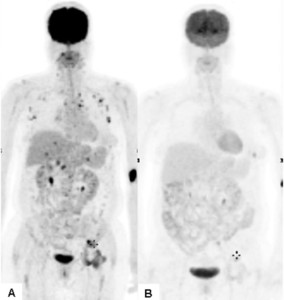