“The prostate cancer disease state model has evolved over the past several years as new therapeutic options have emerged, so we are now facing multiple lines of effective systemic therapies for this disease,” announced Andrew J. Armstrong, MD, ScM, Associate Professor of Medicine, Co-Director of Clinical Research Program at Duke Cancer Institute, and a member of the NCCN Guidelines Panel for Prostate Cancer. However, “the appropriate sequence of these agents is not well-known,” he admitted, and potential castration-resistant prostate cancer (CRPC) biomarkers may help to guide therapeutic choices for these patients in the not-too-distant future.

Although many men present with metastatic prostate cancer, most progress through local disease, rising prostate-specific antigen (PSA) levels and local therapy, and then to nonmetastatic CRPC (Figure 1). They move through first, second, and third lines of therapies, often sequencing through secondary hormonal strategies such as antian-drogens (eg, enzalutamide), androgen synthesis inhibitors (eg, abiraterone), immunotherapy (eg, sipuleucel-T), taxane-based chemotherapy, and radioisotopic therapy, such as the alpha emitter radium-223. In fact, they often face fourth-line options and beyond as their disease transitions to treatment-refractory metastatic CRPC. “This time period is often measured in many years to decades from the time of diagnosis,” noted Dr. Armstrong.

Support for the use of docetaxel in metastatic castration-sensitive prostate cancer came from the long-standing phase III ECOG-led CHAARTED trial of nearly 800 patients.1 Compared with those given androgen-deprivation therapy (ADT) alone, patients who received ADT and docetaxel had a longer overall survival (OS; 57.6 vs 44.0 months), which was not only statistically significant but clinically relevant. “The hazard ratio [HR, 0.61] for survival was more impressive than any of the past HRs seen with any other therapies for CRPC,” revealed Dr. Armstrong.

Moreover, patients with high-volume metastatic disease (visceral metastases, ≥4 bone metastases, and at least on extra-axial metastasis) had a 17-month improvement in median OS. Dr. Armstrong mentioned 3 other benefits associated with the use of early docetaxel in these patients: better PSA response, longer time to CRPC, and longer time to clinical disease progression.

In contrast, results from the randomized phase III GETUG-AFU 15 trial did not show an improvement

in OS,2 even in men with high-volume or high-risk metastatic castration-specific disease,3 with the addition of docetaxel to ADT. In fact, the investigators concluded, “Docetaxel should not be used as part of first-line treatment for patients with noncastrated metastatic prostate cancer.”2

Dr. Armstrong offered a possible explanation for the differing study results (Figure 2). “Perhaps poor-risk, high-volume patients have a different biology than low-risk, low-volume patients.” Or, he added, both groups of patients benefit equally, but the studies were underpowered in this good-risk subset, while the ECOG CHAARTED trial was the only one sufficiently powered with long term follow-up in the high-volume subset. “It will take a meta-analysis of these trials to know whether docetaxel should be routinely used in these lower-volume or lower-risk patients,” he concluded.

Currently, sipuleucel-T remains the only immunotherapeutic agent approved in CRPC. It was approved several years ago based on the results of the IMPACT study.4 Dr. Armstrong focused on the more recent finding from this clinical trial, which demonstrated a trend toward a greater survival benefit with sipuleucel-T in patients with a lower baseline PSA level.5 In those with a PSA level greater than 134.1 ng/mL (the worst prognostic subset), OS difference was only 2.8 months. However, in those with a PSA level less than 22.1 ng/mL, the difference in OS was 13.0 months.5

“I would choose the patients with lower PSA levels and lower-risk metastatic CRPC disease for sipuleucel-T to maximize the benefits and minimize the risks,” stated Dr. Armstrong. Based on the IMPACT trial results, a case could be made for starting immunotherapy as an early treatment strategy in sequencing algorithms for men with asymptomatic to minimally symptomatic metastatic CRPC.5

the liver or lungs or nonvisceral disease, and this agent seemed to provide clinical benefit in all subsets of men that were evaluated,” explained Dr. Armstrong.

Fatigue, fall risk, and hypertension were the most common clinically relevant adverse events associated with enzalutamide treatment.7 In fact, hypertension occurred 2 to 3 times as often with enzalutamide, Dr. Armstrong noted. “There should be some vigilance to perform blood pressure monitoring [with enzalutamide], much like with abiraterone,” he emphasized. The risk of seizures was low at 0.1% in both groups, including placebo-treated men.

Updated data from the key pivotal trial of abiraterone were reported recently.8 In the final analysis of the phase III COU-AA-302 study, median OS was longer with abiraterone than placebo in chemotherapy-naÏve men with metastatic CRPC (HR, 0.81). This 20% to 30% improvement in OS and the absolute survival of nearly 3 years was similar to that with enzalutamide and is a substantial improvement based on historic data, indicating that these men are living longer with greater access to effective systemic therapies, noted Dr. Armstrong.

Reported side effects with abiraterone include fatigue, hypertension, fluid retention, and hypokalemia, although Dr. Armstrong noted that the use of prednisone improves its safety profile. In addition, “there should be liver function monitoring, because approximately 5% of patients will have a grade 3 or higher ALT [alanine aminotransferase] increase,” he recommended.

Recently, Dr. Armstrong and colleagues9 reviewed the trials evaluating enzalutamide with abiraterone, reflecting similar trials in similar populations. They found similar efficacy with both of these agents. “There is no right or wrong answer in regard to the question of whether to choose abiraterone or enzalutamide, and [based on the data], we cannot say one drug is better,” he admitted. However, abiraterone requires prednisone, and enzalutamide does not. In addition, abiraterone may cause mineralocorticoid excess, and enzalutamide does not. The adverse effect profiles for these agents differ. For example, patients with diabetes or who have undergone immunotherapy may wish to avoid prednisone, whereas patients with a history of seizures may wish to avoid enzalutamide. Lastly, both PSA and radiographic response rates tend to favor enzalutamide. Updated data at ASCO 2015 should provide additional data on these therapies, and ongoing studies (STRIVE, PROSPER, SPARTAN) are evaluating the efficacy of these agents and ARN-509 (an agent similar to enzalutamide) in the nonmetastatic CRPC.

Dr. Armstrong focused brief attention on the cross-resistance seen between abiraterone and enzalutamide.10 In reportedly the first study to evaluate the effectiveness of enzalutamide after failure of abiraterone,10 the investigators showed that a PSA response was achieved in less than one-third of the men in the post-docetaxel CRPC setting, with a short time to tumor progression of 4 months and rare radiographic responses. Similar findings have been seen with the use of abiraterone after enzaluatmide failure in the pre-docetaxel setting, he added. “This indicates that there is clear clinical cross-resistance,” acknowledged Dr. Armstrong, which he called a “disappointing observation, given that we do not have effective hormonal agents clinically available yet for men who have progressed on one of these novel agents.”

Resistance mechanisms to enzalutamide and abiraterone have been studied. For example, detection of androgen-receptor splice variant 7 messenger RNA (AR-V7) in circulating tumor cells from patients with CRPC may be associated with resistance to these 2 agents.11 In fact, AR-V7 may represent a potential biomarker of treatment response.

Antonarakis et al11 discovered that patients who were AR-V7–negative responded better to enzalutamide and much better to abiraterone, whereas those who were AR-V7–positive did not respond to either drug. With this method, “you could predict almost perfectly who would respond to these drugs,” proposed Dr. Armstrong. “The HR of 6 to 16 is a major effect, almost like EGFR mutations in lung cancer.” However, large-scale prospective validation of this potential biomarker of response is required. In addition, the cross-resistance was less complete for patients who received AR-V7 and those after abiraterone or enzalutamide who went on to receive docetaxel, as there were clearly responders to taxane-based chemotherapy in these men in several studies. These data suggest that docetaxel should be considered as a standard option after progression on abiraterone or enzalutamide.

Finally, Dr. Armstrong discussed the use of the alpha emitter radium-223 in metastatic prostate cancer. Study data supporting its use come from the phase III ALSYMPCA trial of 921 patients with confirmed symptomatic CRPC, at least 2 bone metastases, and no known visceral metastases.12 OS favored the use of radium-223 with best standard of care (eg, palliative external-beam radiotherapy, corticosteroids, anti-androgens, or ketonconazole) versus best standard of care alone (14.9 vs 11.3 months). According to Dr. Armstrong, OS may be even better in men with a high alkaline phosphatase level, with a 30% reduction in the risk of death.

“There is a benefit regardless of prior docetaxel use,” he added. Thus, radium-223 should be considered in symptomatic men with bone-predominant metastatic CRPC, although no head-to-head data versus docetaxel are yet available. These data suggest that radium-223 may represent a reasonable option in men with symptomatic bone-predominant metastatic CRPC either before or after docetaxel, and is typically offered to men following progression on one novel hormonal therapy, such as abiraterone or enzalutamide. Ongoing studies are evaluating the earlier use of this agent in combination with these novel hormonal therapies. 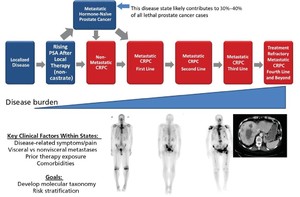 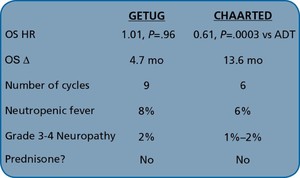