It is important for oncology providers to learn how to prevent and manage these toxicities themselves. Although referral to dermatologists is ideal, timely appointments are not always possible.

At Memorial Sloan Kettering Cancer Center, Dr. Lacouture said, “We have tried to mitigate this delay through a referral system in which the oncology provider contacts the dermatologist, who sees the patient within a day or 2 and then communicates the treatment plan to the oncologist.”

The mainstay of treatment for most macro-papular rashes is medium- or high-potency topical steroids. In grade 3 rash, oral corticosteroids and antihistamines may be warranted. Oral aprepitant can address resistant pruritus. Oral corticosteroids and compression therapy can be useful for gemcitabine-associated peripheral edema. Maculopapular rash that is intertriginous (ie, in body folds) may not itch but can be painful and become infected; it is treated with topical corticosteroids and topical antibiotics.

“The impact of an acneiform rash associated with EGFR inhibitors cannot be understated,” he said. Ironically, however, severity of rash corresponds to better response to treatment, according to several trials of metastatic colorectal cancer, with longer survival times among patients with grade 3 rash.1 Acne-like rash emerges first, followed by postinflammatory effects such as dry skin, fissures in palms and soles, and paronychia (nail changes).

Unfortunately, surveys have shown a high rate of discontinuation or reduction of EGFR inhibitors due to rash, Dr. Lacouture noted, “which underscores the notion that this rash should be prevented or treated very early.”

Dr. Lacouture cited a large body of data supporting prophylactic antibiotics to prevent this rash. Minocycline 100 mg per day was shown to reduce lesions by more than 50% and rash severity within the first 4 weeks of treatment with cetuximab.2 Similarly, 150 mg of minocycline twice per day on day 1 of treatment with erlotinib reduced rash by 40% compared with the reactive use of topical clindamycin plus hydrocortisone with and without minocycline.3 And prophylactic use of doxycycline 100 mg twice per day plus a low-potency topical steroid reduced grade 2 or higher skin toxicity by 70%, versus reactive treatment, and also reduced pruritus, secondary infections, and paronychia as well as non-dermatologic toxicities grade 3 or greater (diarrhea, neutropenia, etc).4

“Importantly, prophylaxis does not negate the beneficial anti-tumor effects of EGFR inhibitors,” he added.

Secondary infections often accompany this rash. He suggested having “a low threshold” for culturing any lesions with discharge, because almost 40% of patients taking EGFR inhibitors with skin toxicities develop secondary bacterial, viral, or fungal infections.

More than 6 months of EGFR inhibition is also likely to produce dry skin. Moisturizing is best accomplished with creams that contain ammonium lactate, salicylic acid, or urea, which provide good moisture retention along with easy application.

Severe pruritus associated with biologic agents often responds to the NK-1 receptor inhibitor aprepitant, as shown in a pilot study of patients with resistance to first-line oral antihistamines and corticosteroids. Of these patients, 91% had more than 50% reduction in intensity of pruritus, and itching recurred in only 13%.5

Some 15% to 25% of patients on EGFR and mTOR inhibitors can develop paronychia as a result of nail plate thinning, ingrowth of particles, and secondary infection. Treatment depends on severity. Nail avulsion sounds extreme, but patients are often relieved by it and return for additional procedures as needed, he said.

A different type of nail change is induced by taxanes, especially docetaxel, with which 30% of patients may demonstrate grade 3 toxicity. This involves elevation of the nail plate, inflammation, and sometimes subungual bleeding and pain. These adverse events can be prevented by cold therapy with ice packs for 15 minutes before infusion, during infusion, and 15 minutes after infusion.

Brittle nails are also a consequence of EGFR inhibition. Brittle nails are also often seen in patients with breast cancer receiving everolimus or trastuzumab/pertuzumab. For repairing splitting, ridges, and fragility, Dr. Lacouture recommended a hydro-soluble nail lacquer or the prescription product polyureaurethane 16%, which produce a rigid barrier to the nail plate. The dietary supplement biotin (2.5

mg) may also be beneficial.

Hand-foot syndrome (HFS) can be seen with a variety of cancer drugs, and its manifestations can differ by drug class. With taxanes, lesions are erythematous and maculopapular; with anthracyclines and anti-metabolites, erythema, fissuring, and edema may be seen. With multikinase inhibitors, blisters may form with erythematous halo, followed by hyperkeratosis, which can be painful (seen in 60% of patients treated with regorafenib). Due to peripheral vasoconstriction, patients can develop skin fragility and blisters in other areas subject to trauma, such as the elbow.

The only randomized study of HFS prevention, conducted in patients receiving capecitabine, showed that prophylactic celecoxib 200 mg/day reduced HFS grade 2 or greater by more than 50%.6 Oral corticosteroids can be beneficial when HFS is due to liposomal doxorubicin.

When patients receive a targeted agent in addition to radiation therapy, the risk of dermatitis and mucositis essentially doubles over that seen with radiotherapy alone. Interestingly, the best treatment appears to be washing with soap and water, which is shown to almost halve the risk of radiation dermatitis.8 The medium-strength topical corticosteroid mometasone was shown in randomized placebo-controlled trials to significantly reduce discomfort, itching, and redness.9

Conversely, interventions not shown to be effective include topical nonsteroidal agents, trolamine, petrolatum, and topical moisturizers.

Mucositis is being seen more with the use of the mTOR inhibitor everolimus. Although “magic mouthwashes” are often prescribed for chemotherapy- and radiation-induced mucositis, canker sores, and mouth pain, in reality “there's no magic in them,” according to Dr. Lacouture, who said there is no evidence supporting their efficacy and recommended a topical corticosteroid instead.

Alopecia has long been a side effect of treatment that greatly concerns patients. In addition to alopecia related to cytotoxics, hair thinning can also occur with inhibitors of BRAF, MEK, EGFR, and hedgehog signaling pathway. Dr. Lacouture made the following recommendations to prevent or manage hair loss:

Dr. Lacouture concluded by emphasizing that dermatologic toxicities matter even more to patients now as they are “surviving longer, and therefore have more opportunity to worry about their appearance and quality of life issues. In the majority of patients, dermatologic events can be well managed.”14,15 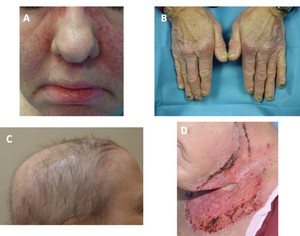