“It has been an exciting 15 years for renal cell carcinoma,” noted Eric Jonasch, MD, Associate Professor, Department of Genitourinary Medical Oncology, Division of Cancer Medicine, and Director of the Von Hippel–Lindau Clinical Center at The University of Texas MD Anderson Cancer Center. “When I started my career,” he added, “we had 1 approved agent; now we have 8.” Dr. Jonasch is Vice-Chair of the NCCN Guidelines Panels for Kidney and Testicular Cancers.

During his presentation at the NCCN 20th Annual Conference, Dr. Jonasch focused on the host of systemic therapies now available for metastatic renal cell carcinoma (RCC) that have category 1 evidence in the most recent version of the NCCN Guidelines. He stated that clinical study data do not support the use of adjuvant therapy for RCC in 2015. With the advent of various antiangiogenic agents and mTOR inhibitors, investigators have moved past the cytokine therapy era, he noted. In the upcoming years, Dr. Jonasch predicted, the next wave of clinical trials will test the combination of novel immunotherapies with antiangiogenic agents in the hope of further improving patient outcomes.

“Metastatic disease is treated in the appropriate situation (such as for a patient with a good performance status and a readily resectable primary tumor) with cytoreductive nephrectomy [Figure 1] and then systemic therapy [Figure 2],” stated Dr. Jonasch.

In the 2015 NCCN Guidelines for Kidney Cancer, first-line options with randomized phase II evidence of benefit include the FDA-approved agents sunitinib, pazopanib, and the combination of bevacizumab and interferon. Furthermore, temsirolimus is indicated for patients with a poor prognosis (category 1 evidence) but is a category 2B option for select patients with other levels of risk.

Supporting phase III data behind the use of sunitinib in patients with metastatic RCC come from Motzer et al.1,2 In one trial, a significant improvement in progression-free survival (PFS) was seen with sunitinib over interferon-alfa (11 vs 5 months),1 with a borderline statistically significant benefit in overall survival despite robust crossover.2

The phase III data supporting the use of the oral agent pazopanib were reported by Steinberg et al,3 which compared pazopanib with placebo in treatment-naïve or cytokine-pretreated patients with advanced RCC. A 5-month increase in PFS was seen with pazopanib (9 vs

4.2 months) in the overall population, and a nearly 8-month increase (11 vs 2.8 months) was seen in the treatment-naïve population.

Unlike the majority of studies with the other agents, early studies with temsirolimus suggested that it might be particularly helpful for those with more aggressive disease and poor-risk features. Poor-risk factors included lactate dehydrogenase level greater than 1.5 times the upper limit of normal, hemoglobin

less than the lower limit of normal, corrected calcium greater than 10 mg/dL, time from diagnosis to first treatment of less than 1 year, Karnofsky performance status between 60 and 70, and multiple organ sites of metastasis. Phase III study data revealed a statistically significant improvement in median overall survival of 10.9 months with temsirolimus compared with interferon in this patient population.5

Finally, according to phase III data on sorafenib in pretreated patients with advanced RCC,6 a 5.5-month PFS was seen with sorafenib versus 2.8 months for placebo.

“When this was presented, we were very happy with that,” admitted Dr. Jonasch. “We have come some ways since then and now have higher expectations for treatments in RCC.”

However, in a small phase II trial of first-line treatment with sorafenib versus interferon in RCC, no difference was seen in median PFS, according to Dr. Jonasch. “This dampened enthusiasm for sorafenib in the front-line setting,” he added.

Dr. Jonasch called the second-line options for the most part “a not strongly evidence-based laundry list of remaining agents that are available.” He focused his discussion on 2 particular agents with category 1 evidence: everolimus and axitinib. The phase III data on everolimus came from the RECORD-1 trial.7 PFS rates favored everolimus over placebo (4.99 vs 1.67 months), with the overall survival curves “overlapping with crossover built into this trial,” noted Dr. Jonasch.

The AXIS trial was the vehicle for the data supporting the use of axitinib over sorafenib in patients whose disease progressed after sunitinib, bevacizumab plus interferon-alfa, temsirolimus, or cytokine-based therapy.8 Even more interesting than the improvement in PFS with axitinib, added Dr. Jonasch, was the finding in the subgroup analysis by prior regimen.

Emerging Treatments on the Horizon

Although antiangiogenic therapy in the frontline setting remains the standard of care, Dr. Jonasch admitted that anti-VEGF therapy is not a “magic bullet.” VEGF blockade is important but certainly not sufficient, he added, opening the door for novel therapies in RCC. Among the more promising options, the focus is on new cancer cell or stromal targets through MET and AXL inhibition. Immune therapies, such as checkpoint antibodies, may also show promise. “We should be targeting the tumor cell itself, but at this point in time, we are sort of targeting the microenvironment,” noted Dr. Jonasch.

Amplification of the MET gene has been identified in both papillary and clear cell RCCs, revealed Dr. Jonasch. In fact, high total MET expression has been linked to shorter PFS and overall survival in patients with metastatic RCC.9 The dual VEGFR2 and MET inhibitor foretinib has been studied in papillary RCC,10 yielding a 9.3-month PFS, indicating there may be some value in this approach. Phase II clinical trials of other MET inhibitors (AZC6094 and INC280) are ongoing.

Immune checkpoint antibodies have been “big news” in melanoma and lung cancer, and now appear to be promising in kidney cancer as well.11 One of these agents, nivolumab, yielded a modest improvement in PFS but a more impressive median overall survival of up to 25 months in patients with metastatic RCC,12 which Dr. Jonasch claimed is “outside the norm for second-line studies.” In addition, ipilimumab plus nivolumab and MK3475 in combination with other approved agents are the focus of ongoing clinical trials. 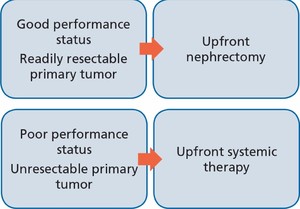 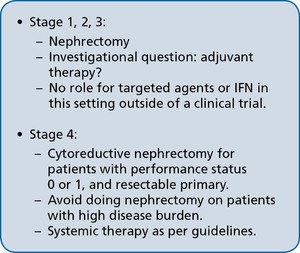