Hepatoid adenocarcinoma of the lung (HAL) is an extremely rare cancer without clear treatment guidance and with a poor prognosis. This report discusses a 64-year-old man who presented with complaints of hemoptysis and was found to have a right upper lobe (RUL) lung mass on chest CT with presence of a right hilar mass and retrocaval lymphadenopathy, and metastasis to the vertebral spine and rib. The patient was diagnosed with T2N2M1 (stage IV) unresectable disease. A biopsy of the RUL mass revealed hepatoid variant adenocarcinoma. Immunohistochemical stains showed tumor cells positive for CK7, AFP, Hep Par 1, napsin A, and cytoplasmic TTF-1 staining. In contrast, CK5, CK6, and CK20 were negative, and EGFR was wild-type. Serum alpha fetoprotein (AFP) level was elevated at 181 ng/mL. The patient was treated with platinum-based doublet chemotherapy and sorafenib, and his AFP level decreased to 25 ng/mL. This case report presents the novel use of sorafenib in combination with platinum-based doublet chemotherapy in EGFR wild-type HAL, which led to a partial response. Single-agent sorafenib led to stable disease overall, achieving a survival among the longest reported for unresectable stage IV, all while maintaining an ECOG performance status of 0 to 1.

All clinicians completing this activity will be issued a certificate of participation. To participate in this journal CE activity: 1) review the learning objectives and author disclosures; 2) study the education content; 3) take the posttest with a 66% minimum passing score and complete the evaluation at http://education.nccn.org/node/64368; and 4) view/print certificate.

Hepatoid adenocarcinoma of the lung (HAL) is an extremely rare cancer that lacks treatment guidance and has a poor prognosis. It is defined as an alpha fetoprotein (AFP)–producing primary lung carcinoma with pathologic findings of acinar and papillary adenocarcinoma resembling hepatocellular carcinoma (HCC). Globally, only 24 cases have been reported. This report presents a case of unresectable stage IV (T2N2M1) HAL with elevated AFP levels that was treated with the multitargeted tyrosine kinase inhibitor sorafenib along with standard treatment for non–small cell lung cancer (NSCLC). This approach led to a decrease in AFP levels and radiologic findings of regression during combination therapy and stable disease during sorafenib monotherapy.

A 64-year-old man presented with hemoptysis and was found to have right upper lung (RUL) opacity on chest radiograph. Results of a chest CT showed a RUL mass (38.0 × 29.4 mm) with the presence of a right hilar mass (43.0 × 29.6 mm) and retrocaval lymphadenopathy with metastasis to the vertebral spine and rib. No liver masses were noted on abdominal CT. CT-guided fine-needle aspiration biopsy of the RUL mass showed adenocarcinoma, hepatoid variant (Figure 1). Immunohistochemical stains showed tumor cells to be positive for AFP (Figure 2A), Hep Par 1 (Figure 2B), CK7 (Figure 2C), and napsin A (Figure 2D), and TTF-1 was positive in the cytoplasm in a granular fashion. In contrast, CK5, CK6, CK20, and histochemical mucicarmine were

all negative; EGFR was wild-type. The serum AFP level was found to be elevated (181 ng/mL).

The patient was diagnosed with stage IV HAL and started on palliative chemotherapy with carboplatin/paclitaxel and sorafenib (400 mg orally twice daily), followed by palliative radiation to the vertebrae for a total dose of 30 Gy. After 2 cycles of carboplatin/paclitaxel and oral sorafenib, results of a chest CT showed a partial response with a decrease in size of the RUL mass (to 24 × 21 mm) and right hilar mass (to 24 × 21 mm) (Figure 3A–D). After 4 cycles of chemotherapy, his AFP level was 25 ng/mL and chest CT results showed stable disease. At this point, the patient continued sorafenib daily for 2 months.

At follow-up, 3 months after his last chemotherapy treatment, a chest CT showed increased lung nodules, but an abdominal CT continued to show absence of liver nodules. His AFP level was 25 ng/mL. The patient was switched from carboplatin/paclitaxel to vinorelbine with continued sorafenib. After 3 cycles of vinorelbine and daily sorafenib, chest CT results showed a new mediastinal lymphadenopathy, an increase in hilar/subcarinal lymphadenopathy and RUL lung mass, and a new hepatic mass on abdominal CT. His AFP level increased to 189 ng/mL. At this point, the decision was made to proceed with gemcitabine with sorafenib. However, the patient received 1 cycle of gemcitabine at the end, and had a total of 9 months of sorafenib daily during the disease course before he was admitted for failure to thrive and transferred to palliative care. The patient survived for a total of 11 months after diagnosis and therapy administration.

Although immunostaining patterns are used for diagnosing HAL and HCC and for differentiating between primary versus metastatic HAL and HCC, no consensus exists among experts regarding what exact immunohistochemistry panel is diagnostic for HAL. Recent case reports and review articles on HAL showed variable immunohistochemistry characteristics among cases reported to date. Mokrim et al3 reported a case of HAL that was negative for CD7 and TTF-1, but positive for CK20 and Hep Par 1. Lin et al4 discussed a case that was negative for CK7, CK20, TTF-1, and Hep Par 1. Lastly, Haninger et al5 reported 5 cases of HAL that demonstrated HAL to be negative for CK20, and positive for CK7, cytoplasmic TTF-1, and Hep Par 1, which is identical to the present case. Furthermore, because the present case had positive cytoplasmic staining for TTF-1, which is considered highly specific and sensitive for HCC, and nuclear TTF-1 staining is usually found in lung adenocarcinomas, Lei et al6 found that cytoplasmic TTF-1 staining in the tumor is strongly suggestive but not diagnostic of HCC. Both HCC and HAL are positive for AFP. Haninger et al5 also described additional immunostaining that should be performed (ie, HEA-125, MOC-31, and monoclonal CEA, which should be positive in HAL vs HCC) (Table 1).

Treatment for HAL includes at least a platinum-based doublet therapy, which is standard treatment for NSCLC. Results of the SHARP trial demonstrated that monotherapy with oral sorafenib prolonged median overall survival (10.7 months in the sorafenib group vs 7.9 months for placebo), with a 31% relative reduction in the risk of death, and delayed the median time to progression for 3 months in patients with advanced HCC.7 However, sorafenib in addition to standard NSCLC treatment failed to show improvement in overall survival in 2 phase III trials. The NExUS trial showed no survival prolongation when sorafenib was added to platinum-based chemotherapy (cisplatin/gemcitabine) compared with cisplatin/gemcitabine alone in patients with advanced nonsquamous NSCLC.8 The ESCAPE trial failed to show that sorafenib added to carboplatin/paclitaxel improved overall survival.9 However, the BATTLE trial, a biopsy-mandated, biomarker-based, adaptively randomized study that evaluated the clinical efficacy of sorafenib monotherapy in patients with previously treated NSCLC, demonstrated that clinical activity of sorafenib in NSCLC, especially wild-type EGFR, was associated with improved progression-free survival in

Immunohistochemistry of HAL and HCC 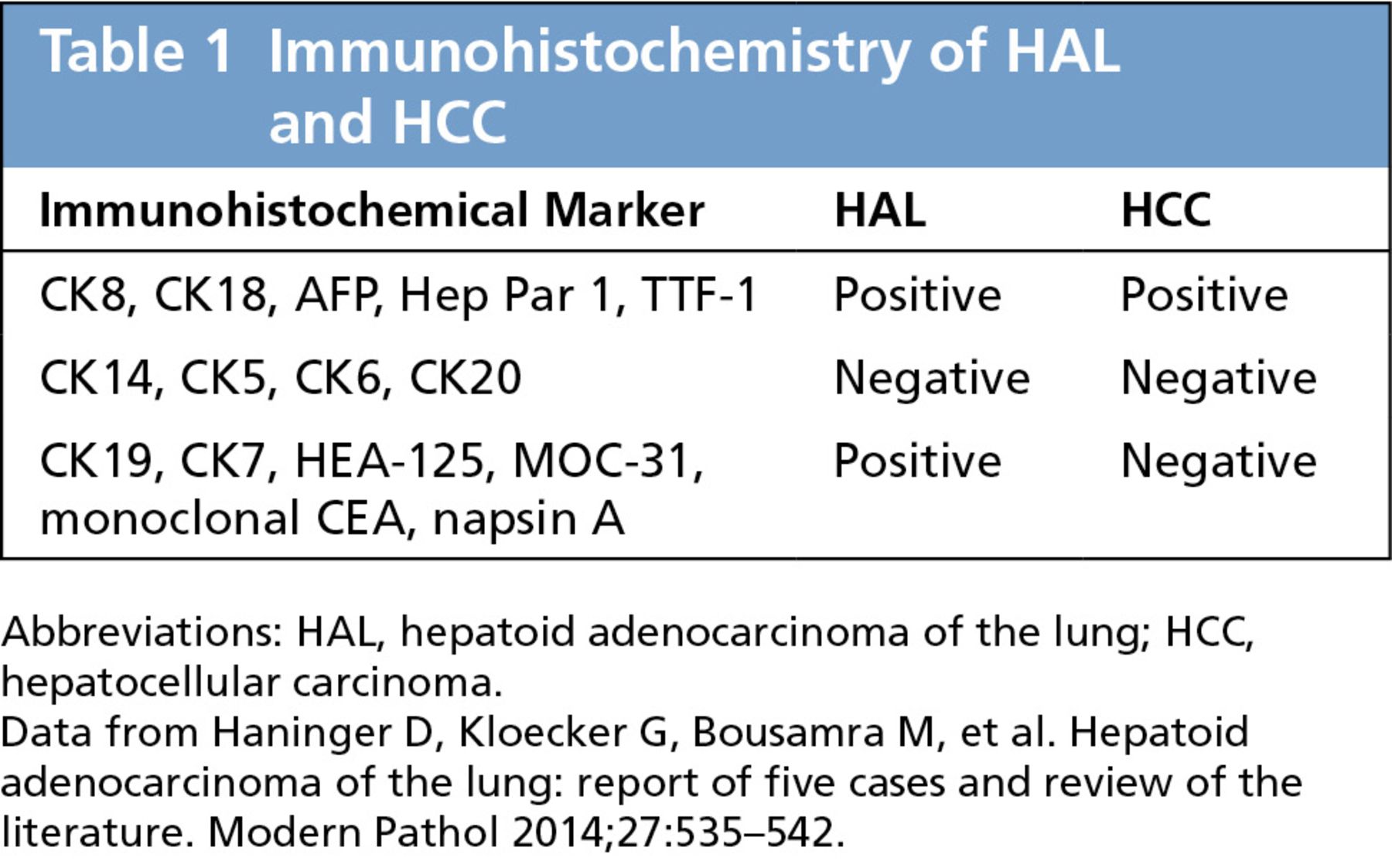 the sorafenib-sensitivex subgroup.10 In addition, Metro et al11 reviewed available phase II and III studies using sorafenib in lung cancer to demonstrate that sorafenib provides a disease control rate in 53% to 90% of patients with advanced NSCLC with aberrant KRAS activation and wild-type EGFR, therefore supporting the use of sorafenib in individual molecularly selective settings. The targeting of the RAS/RAF/MEK/ERK pathway with clinically available surrogate markers harboring KRAS and/or BRAF mutations could be a strategy for selecting more responsive personalized cancer therapy using molecular signatures, compared with administering sorafenib in large unselected patient populations.

A review of all of the cases reported in the literature has shown that resectable cases of HAL and those presenting at an earlier stage have longer survival.12–20 Survival for surgical resection followed by chemoradiation ranged from 10 to 37 months for stage IV to 4 years for stage IIB4,5; a 9-year survival was reported for one case involving a debulked stage IV tumor.5 However, for unresectable HAL, survival ranges from 6 to 11 months, similar to the present case with a survival of 11 months (Table 2).

were reported in operable and lower-stage cases). In this patient, no additional side effects were reported that were attributable to sorafenib and the patient maintained an ECOG performance status of 0 to 1 until 3 weeks before his death. In addition, the patient showed stable disease after 2 months of monotherapy with sorafenib.

Sorafenib in AFP-producing, EGFR wild-type HAL in combination with platinum-based doublet chemotherapy was tolerated well, and was associated with a survival time comparable to that of the longest surviving patient with unresected HAL reported in the literature. Future use of sorafenib in EGFR wild-type HAL as a rare subset of NSCLC represents a reasonable application of multitargeted tyrosine kinase inhibitors limited to tumors that are EGFR wild-type and KRAS- and/or BRAF-positive as biomarker-targeted therapy.

Miranda Hughes, PhD, Oncology Scientist/Senior Medical Writer, has disclosed that she has no relevant financial relationships.

Immunohistochemical stains showed tumor cells to be positive for (A) AFP, (B) Hep Par 1, (C) CK7, and (D) napsin A. 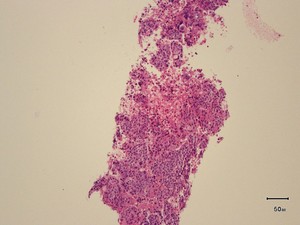 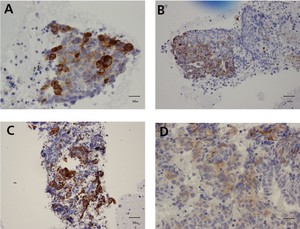 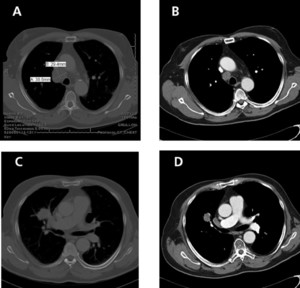