Ewing Sarcoma in a Patient With Cowden Syndrome

A 47-year-old woman, initially diagnosed in 1996 with Cowden syndrome (CS), PTEN–mutant bilateral breast cancer, a thyroid nodule, and uterine fibroids, presented to UCLA in 2013 with Ewing sarcoma of the pelvic bone. Her treatment course included mastectomies, hysterectomy/oophorectomy, and total thyroid resection, and chemotherapy, radiation, and hemipelvectomy for Ewing sarcoma. This case report illustrates the unusual presentation of Ewing sarcoma in a patient with PTEN-mutant CS, the probable underlying molecular pathogenesis, long-term management, and therapeutic considerations.

A 47-year-old woman was originally diagnosed with breast cancer at age 29 years in 1996. She had a 7-mm well-differentiated infiltrating ductal carcinoma of her right breast with 3 of 15 lymph nodes positive. The tumor was estrogen receptor (ER)–positive and HER2/neu-negative. She also had ductal carcinoma in situ (DCIS) in her contralateral left breast. After bilateral mastectomies, she received adjuvant chemotherapy with doxorubicin and cyclophosphamide (AC) followed by paclitaxel. She received 4 cycles of doxorubicin at 60 mg/m2. She was not given adjuvant tamoxifen because data supporting its adjuvant use was not mature at that time. In the setting of bilateral breast cancer in a young woman with maternal Ashkenazi Jewish ancestry, genetic testing for BRCA1/2 was recommended, which revealed her to be BRCA-negative. Given the history of uterine fibroids, thyroid nodules, breast cancer, and macrocephaly, a diagnosis of Cowden syndrome (CS) was considered and subsequently confirmed with the R130Q mutation in her PTEN gene. In 2008, she had a complete hysterectomy with salpingo-oophorectomy for uterine fibroids, and in 2009 she had a complete thyroidectomy for multicystic adenomatous nodules with focal papillary hyperplasia.

The patient was doing well until she developed right-sided hip pain in July 2012 that was thought to be exercise-related. In October 2013, she had a fall that exacerbated this hip pain. Radiographic findings showed a fracture of her iliac wing through an expansile lytic lesion (Figure 1A). MRI showed a 4.1 x 3.1 x 5.6-cm expansile lesion involving the iliac wing with adjacent soft tissue extension and a pathologic fracture (Figure 1B). PET/CT showed a localized pelvic lesion (Figure 1C). Biopsy results revealed a small blue round cell tumor (Figure 1D) positive for CD99 but negative for pancytokeratin, S100, Melan-A, desmin, myeloperoxidase, CD43, CD45, CD30, CD138, Kappa, Lambda, CK7, mammaglobin, ER, progesterone receptor, HER2/neu, and GCDFP-15. This specimen was sent for fluorescence in situ hybridization analysis and showed an EWSR1 gene rearrangement. Based on these results, the diagnosis of Ewing sarcoma was made.

Physical examination showed a well-appearing, highly functional woman without any noticeable impairment. She was noted to have macrocephaly, with an occipitofrontal circumference of 59.5 cm (>97th percentile). Surgical scars were found on her breasts, neck, and abdomen. Neurologic examination was intact, with no cerebellar signs or ataxia. There was no kyphoscoliosis. Skin and mucocutaneous examination showed facial papules, trichilemmomas (which were clinically diagnosed and not biopsy-confirmed) (Figure 2A), oral mucosal papillomas, and acral keratoses (Figure 2B,C). She had an ill-defined 3-cm mass at the right anterior superior iliac spine that was firm, fixed, and mildly tender. No cervical, axillary, or inguinal lymphadenopathy was noted. The patient's case was discussed at a multidisciplinary sarcoma tumor board and she was treated with 3 cycles of neoadjuvant chemotherapy consisting of vincristine, doxorubicin, and cyclophosphamide, alternating with ifosfamide and etoposide. She also received 45 Gy of neoadjuvant radiation therapy to her right pelvis. Subsequently, she underwent a right hemipelvectomy of the superior iliac crest. On histology, her tumor was shown to have greater than 99% tumor necrosis with negative surgical margins. Her postoperative course was uneventful. She received adjuvant chemotherapy with the standard Ewing regimen. Interestingly, she reported decrement of her facial papules and trichilemmomas after chemotherapy.

CS is a disorder that belongs in the group of PTEN hamartoma tumor syndromes (PHTs), which are characterized by germline mutations, mostly in the PTEN tumor suppressor gene, that carry an increased risk of certain types of tumors.1,2 Characteristic features of CS include multiple hamartomas presenting as benign skin tumors, such as multiple trichilemmomas, papillomatous papules, and acral keratosis.3,4 Other findings include intestinal hamartomatous polyps and dysplastic gangliocytomas of the cerebellum (Lhermitte-Duclos disease).5 A wide variation of skeletal abnormalities have been mentioned, but not proven to be associated with CS, including kyphoscoliosis, pectus excavatum, syndactyly, and maxillary, mandibular, and scapular hypoplasia.6

In this case, the patient initially presented with bilateral breast cancers, including a well-differentiated infiltrating ductal carcinoma on her right breast and DCIS on her left breast, at a young age. The diagnosis of CS was established based on the NCCN Clinical Practice Guidelines in Oncology (NCCN Guidelines) for Genetic/Familial High-Risk Assessment: Breast and Ovarian (to view the most recent version of these guidelines, visit NCCN.org).5 She had 3 major criteria: (1) breast cancers (bilateral), (2) macrocephaly, and (3) multiple mucocutaneous lesions, including acral keratoses (≥3 acral hyperkeratotic papules) and facial trichilemmomas (≥3, clinical diagnosis). And she had one minor criterion: multicystic adenomatous nodules with focal papillary hyperplasia. Genetic sequencing confirmed an R130Q missense mutation in the PTEN gene.

CS is associated with an increased risk of developing breast, thyroid, endometrial, and renal cell cancers, with a lifetime risk as high as 85%, 35%, 28%,

and 35%, respectively.7–10 Furthermore, patients with CS who have been diagnosed with one cancer have a 7-fold increased risk of developing subsequent cancers or second malignant neoplasms (SMNs).11 A recent multicenter prospective study of 2,912 patients with CS and CS-like syndromes revealed 114 patients (5.6%) who had a documented PTEN mutation. Of these 114 patients, 46 (40%) had SMNs; these were commonly breast, thyroid, endometrial, and renal cancers. Colorectal cancer and melanoma were also documented as SMNs, but there was no report of Ewing sarcoma.11 Previous reports documented the presentation of rare bony and soft tissue sarcomas in association with CS, such as osteosarcoma12 and liposarcoma,13 but no reports mentioned Ewing sarcoma. A search through PubMed using the terms “Cowden syndrome” and “Ewing sarcoma” could not identify any other cases.

Ewing sarcoma is a rare, small round blue cell tumor with characteristic translocations, thought to be of neural origin, that classically develops in the bones or soft tissues of children and adolescents, with an incidence peak at age 15 to 17 years. The present patient developed the disease at age 46 years, 17 years after her breast cancer diagnosis. The impact of age on outcome is controversial; limited data have indicated that the outcome for adults is not as promising as for adolescents,14,15 but other studies have shown that adults are not always treated with the same chemotherapy dose intensity as children.16,17

There is no clear molecular relationship between CS and Ewing sarcoma. CS is an autosomal dominant inherited disease with incomplete penetrance and variable expressivity, mostly in PTEN, a tumor suppressor gene located on chromosome 10q23.3.1,2 PTEN encodes for a 403–amino acid protein and acts as a lipid phosphatase that leads to hypoactivity of the PI3K/AKT/mTOR pathway.18,19 Loss or reduced PTEN activity results in increased phosphorylation of cellular proteins that induce cell cycle progression, altered metabolism, growth, migration, and invasion.20 Phenotypically, these mutations result in characteristic features, such as macrocephaly, intestinal hamartomatous polyps, benign skin lesions, and neoplastic transformation. Studies have shown that the deletion or reduction of PTEN can lead to breast cancer,21 melanoma,22 thyroid cancer,23 endometrial cancer,24 and other types of cancers. Small subsets of patients with CS or a CS-like syndrome may have mutations involving KLLN, SDHB, SDHC, and SDHD, and PIK3CA or AKT1.14

Meanwhile, the Ewing sarcoma family of tumors are a group of malignant bone or soft tissue tumors most commonly characterized by the unique t(11;22)(q24;q12) translocation, resulting in EWS-FLI1 fusion.25 In addition to the characteristic translocations, there are 2 sources of variability: the EWS fusion partner (eg, FLI1, ERG, ETV1, E1A, or FEV) and the breakpoint location within the genes. Somatic alterations in known tumor suppressor genes have been identified in Ewing sarcoma, including CDKN2A,26 TP53,27,28 and recently SOX6 and PTEN.29 The rate of PTEN anomalies in Ewing sarcoma was documented at 14.2%.29 Studies also showed that PTEN and TP53 regulate and enhance each other's tumor-suppressive function.30,31 Although PTEN loss has been evidenced in Ewing sarcoma, it does not appear to be a driver mutation, because Ewing sarcoma had not been noted in patients with CS until this report.

In the present patient, at the time of writing both her breast cancer and Ewing sarcoma have been treated successfully with conventional chemotherapy, radiation therapy, and surgery. She will be closely surveilled for the occurrence of new neoplasms in several organs. An mTOR inhibitor may be indicated if she develops symptomatic skin, gastrointestinal, or neurologic lesions in the future.

This case report is the first to describe the coexistence of Ewing sarcoma of the pelvis in a patient with CS. Surveillance for other secondary malignancies linked to PTEN mutation should be performed regularly and thoroughly in patients with PTEN-mutant CS to ensure a prompt diagnostic workup and proper management. The rare occurrence of synchronous CS and Ewing sarcoma in this patient also emphasizes the need for further research.

Dr. Chawla has disclosed that he receives research support from and is a consultant for CytRx, Amgen, Bayer, and Threshold. The remaining authors have disclosed that they have no financial interests, arrangements, affiliations, or commercial interests with the manufacturers of any products discussed in this article or their competitors.

Pathognomonic mucocutaneous features of Cowden syndrome: (A) trichilemmomas and (B, C) acral keratoses. 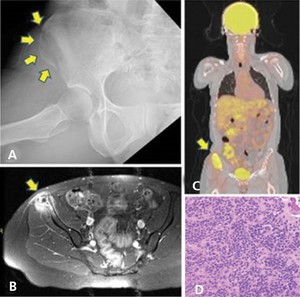