Background: Hepatitis C virus (HCV) infection is a neglected disease in patients with cancer. Therefore, this study examined the impact of HCV infections in these patients. Methods: The records of HCV-infected patients with cancer seen at The University of Texas MD Anderson Cancer Center (2008–2011) were reviewed. The outcomes of those who underwent HCV treatment were analyzed. Results: Of 1291 patients who had positive test results for an antibody to HCV (anti-HCV), 744 (58%) were tested for HCV-RNA; 642 (86%) of which had chronic HCV infections. Most had solid tumors (72%) and genotype-1 (G-1) infections (66%). HCV therapy was administered in 348 patients (98 of them after cancer diagnosis). Sustained virologic response (SVR) occurred in 27 (35%) of the 78 patients treated for whom outcome data were available. Compared with patients who experienced an SVR, more patients who did not were black (29% vs 4%; P=.007), had G-1 infections (72% vs 6%; P<.0001), and had higher baseline aspartate aminotransferase (78 vs 47 IU/L; P=.006) and alanine aminotransferase levels (71.1 vs 43.3 IU/L; P=.009). Overall, progression to cirrhosis (hazard ratio [HR], 0.38; P=.03) and portal hypertension (HR, 0.19; P=.009) was less common in those treated, irrespective of the treatment outcome (SVR or non-SVR). Hepatocellular carcinoma (HCC) developed as a second primary malignancy in 7% of patients with non-HCC cancer. Conclusions: This is the largest series to analyze HCV infections in patients with cancer. HCV therapy is feasible and prevents liver disease progression in this forgotten population. A treatment algorithm is provided. 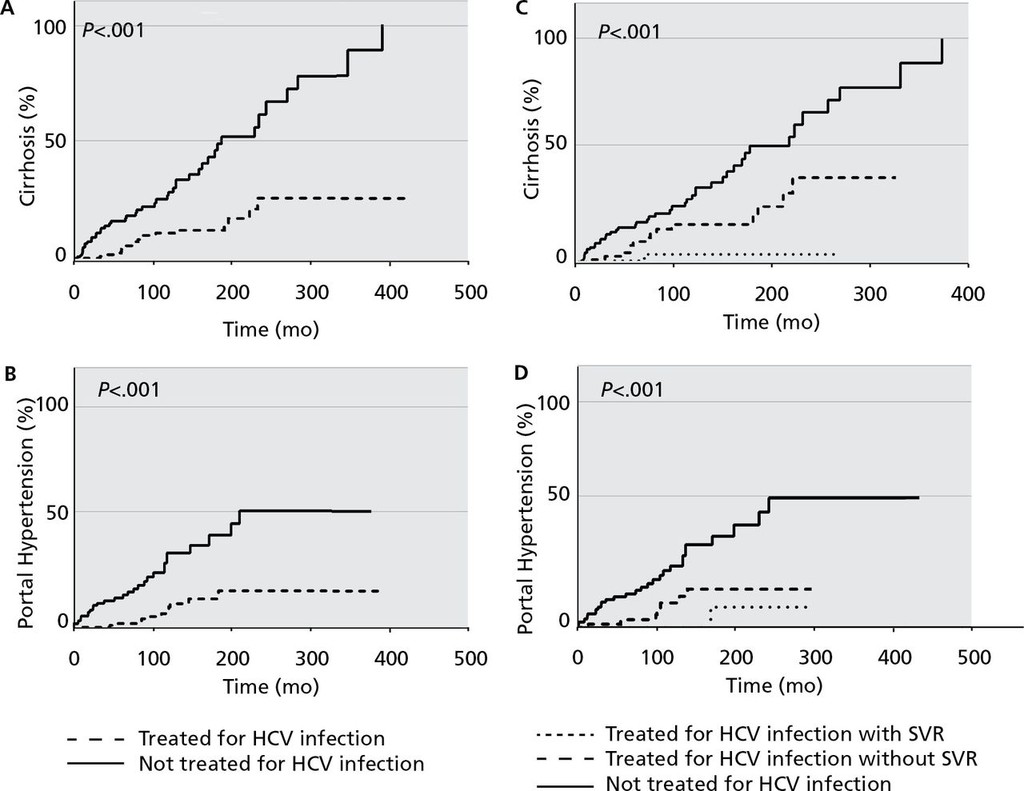 Kaplan-Meier curves for progression to cirrhosis and portal hypertension in hepatitis C virus (HCV)–infected patients with cancer, according to use of HCV therapy. The probability of cirrhosis and portal hypertension increased over time but was significantly higher (P<.001) in patients who did not undergo HCV therapy than in those who did (A and B). Likewise, the probability of underlying liver disease progression differed significantly (P<.001) based on treatment outcome, with those who did not experience a sustained virologic response (SVR) having a higher probability than those who did (C and D). 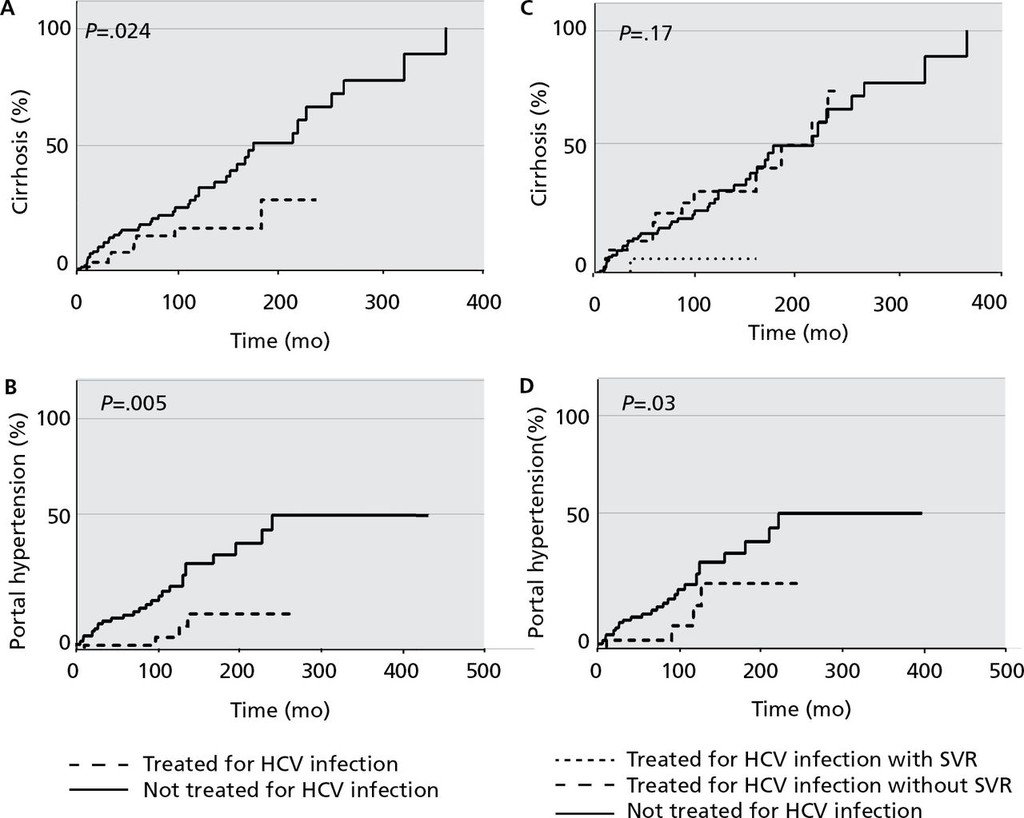 Kaplan-Meier curves for progression to cirrhosis and portal hypertension in hepatitis C virus (HCV)–infected patients with cancer, according to use of HCV therapy after cancer diagnosis. The probability of cirrhosis increased over time and was significantly higher (P=.024) in patients who did not undergo HCV therapy than in those who did (A). However, stratifying based on treatment outcome (sustained virologic response [SVR] vs no SVR) eliminated this statistical significance (P=.17; C). The probability of progression to portal hypertension was significantly higher in those who were not treated for HCV infection (P=.005; B) even after stratification on SVR status (P=.03; D). 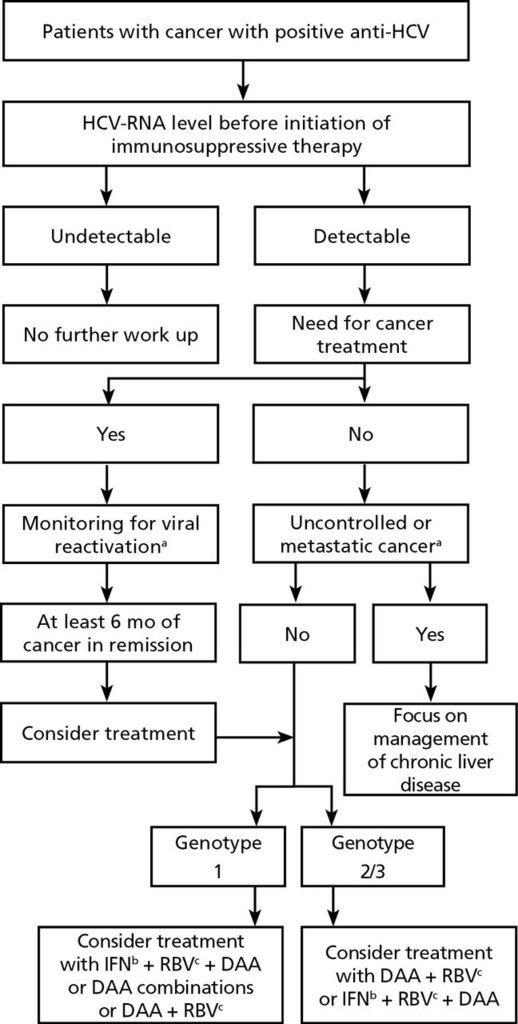 Management algorithm for patients with cancer and chronic HCV infection in 2014. The standard approach is to wait ≥6 months after cancer remission before initiating myelosuppressive HCV treatment with pegylated IFN (pegIFN) and RBV to allow patients’ bone marrow to recover. HCV treatment can be administered to HCT recipients who meet the following criteria: complete remission of the original disease, ≥2 y since HCT, no evidence of protracted acute or chronic GVHD, no immunosuppressive therapy for 6 months, and normal blood counts and serum creatinine levels.20 The use of pegIFN plus RBV may be encouraged by oncologists because of IFN’s anticancer activity33,34; however, newer antivirals are urgently needed for patients with genotype 1 infections. The use of DAAs combinations is prudent and recommended in several scenarios (eg, need for IFN-free regimens).32

cAs recommended for patients without cancer.9,32 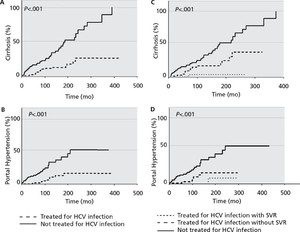 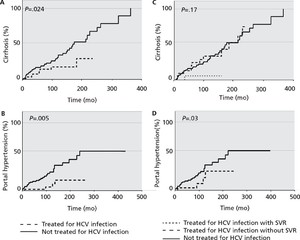 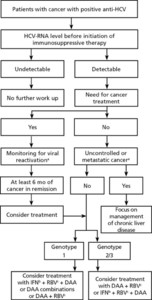