Hepatic Epithelioid Hemangioendothelioma in a Patient With Hemochromatosis

Hepatic epithelioid hemangioendothelioma (HEHE) is a rare hepatic vascular tumor that represents a diagnostic challenge. The rarity of this neoplasm precludes establishment of a standard-of-care treatment. Risk factors for HEHE are not well-known. Liver transplant remains the most common therapeutic modality for nonmetastatic disease. This article describes a patient who presented with abdominal pain, fatigue, poor appetite, and weight loss. Genetic testing showed that the patient was homozygous for C282Y consistent with hereditary hemochromatosis, and liver biopsy was consistent with malignant epithelioid hemangioendothelioma. The patient was referred for a liver transplant but was deemed inappropriate for transplant secondary to peritoneal studding, with frozen-section analysis showing metastatic disease at the time of surgery.

All clinicians completing this activity will be issued a certificate of participation. To participate in this journal CE activity: 1) review the learning objectives and author disclosures; 2) study the education content; 3) take the posttest with a 66% minimum passing score and complete the evaluation at http://education.nccn.org/node/53065; and 4) view/print certificate.

Epithelioid hemangioendothelioma (EHE) is a rare neoplasm of vascular origin. The tumor may arise at various sites, including the skin, soft tissue, bone, lung, liver, spleen, and stomach. Primary involvement of the liver was first reported by Ishak et al1 in 1984. Hepatic EHE (HEHE) is a hepatic vascular tumor with variable malignant potential,2 although EHE is considered a malignancy in current classification schema. The estimated incidence of HEHE is less than 0.1 per 100,000.3 It is slightly more common in women, with a female-to-male ratio of approximately 1.6:1.0. Risk factors for HEHE are not well-known. An association of HEHE with oral contraceptives has been suggested but not completely established.4,5 HEHE represents a diagnostic challenge, and its rarity precludes establishment of a standard of care. This case report describes a patient who presented with abdominal pain for whom further diagnostic workup revealed hereditary hemochromatosis and HEHE. The patient was referred for a liver transplant but was deemed inappropriate for transplant secondary to peritoneal studding, and frozen section analysis showed metastatic disease at the time of surgery.

A 24-year-old woman with no past medical history presented with right upper quadrant abdominal pain, fatigue, poor appetite, and an approximately 20-lb weight loss over 2 to 3 months. She denied alcohol or illicit drug use. She had smoked half a pack of cigarettes per day for many years. Her family history was negative for hemochromatosis or liver cancer. Physical examination revealed mild right upper quadrant tenderness only. Initial workup showed mildly abnormal liver tests (Table 1). Hepatitis screen was negative for acute or chronic hepatitis. Screening results were negative for antinuclear antibodies, anti-smooth muscle antibodies, antimitochondrial antibodies, and ceruloplasmin. A CT of the abdomen showed numerous low-density liver lesions (largest measuring 15 mm). The larger lesions were of low attenuation, and remained low in central attenuation on the early phase of contrast-enhanced images, but eventually subtotally equilibrated with hepatic parenchyma. These features were reported as compatible with hemangiomas, but because all lesions did not fully equilibrate, a subsequent abdominal ultrasound was performed and revealed multiple hypoechoic solid lesions, believed to be inconsistent with hemangiomas. An MRI of the abdomen showed numerous liver lesions of low T1 signal before contrast enhancement and relatively increased T2 signal with vascular enhancement and “target” appearance on the delayed enhanced images. These finding were believed to be most consistent with hamartomas. An initial liver biopsy at an outside hospital revealed an extensive hepatic iron accumulation in hepatocytes and Kupffer cells. Quantitative iron was 6861 mcg/g dry weight with a hepatic iron index of 5.1. Genetic testing showed that the patient was homozygous for C282Y consistent with hereditary hemochromatosis. 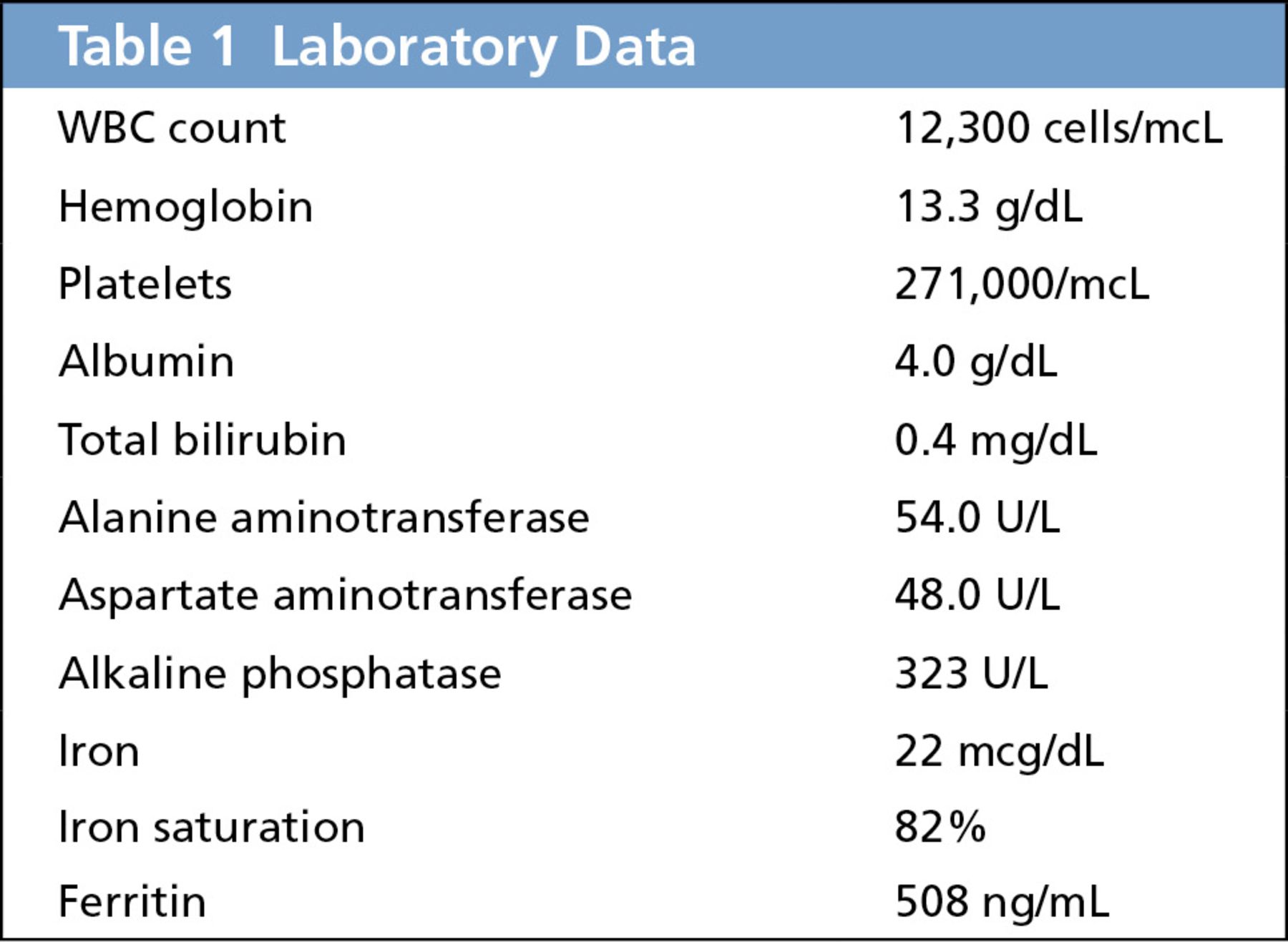 At this point, the patient was referred to the authors’ institution. Another liver biopsy was performed and revealed areas of infarctive necrosis with large pleomorphic and epithelioid-appearing neoplastic cells, which diffusely infiltrated between the portions of hepatic parenchyma, sinusoids, and vessels. Immunoperoxidase stains showed that the tumor cells were positive for CD31 and CD34 (Figure 1). These findings were most consistent with malignant EHE. MRI and CT scan of the abdomen were negative for any extrahepatic involvement. A whole-body PET/CT and an MRI of the head were negative for metastatic disease. The patient was counseled to have her family tested for hemochromatosis and she was referred to an oncologist and a transplant surgery clinic. She was started on sorafenib while waiting for liver transplant. Two months later, she was admitted for possible liver transplant, but surgery was deemed inappropriate secondary to peritoneal studding, with frozen section analysis showing metastatic disease. Gemcitabine was started as single-agent therapy, with initial dose reduction for liver failure. She received only 2 doses and, because of worsening symptoms, refused further treatment. She was then started on oral sirolimus at 1 mg daily, which was increased to 2 mg daily and adjusted accordingly based on symptoms and 24-hour trough levels. By 23 days she showed improved liver function and decreased abdominal pain and ascites. Radiologic evaluation revealed no progression of hepatic or lung lesions. At 5 months of sirolimus therapy she was able to wean off all pain medications and only take as needed.

HEHE is rare and presents a diagnostic challenge. According to a literature review, approximately 60% to 80% of patients are initially misdiagnosed, as noted with the present patient.6 HEHE has a variable malignant potential and behavior. Many patients have a slowly progressive, low-grade malignant tumor and survive for decades. However, a rapidly fatal evolution is also possible. The most common clinical manifestations include abdominal pain, weight loss, jaundice, fatigue, and hepatomegaly. Makhlouf et al2 reported his findings in a series of 137 patients with this tumor, and at the time of diagnosis 25% were asymptomatic. This disease has no well-known risk factors. An association with oral contraceptives has been suggested but not completely established.4,5 An elevated serum CA19-9 level has been recently reported as a negative prognostic factor.7

A clinical suspicion based on certain features, such as occurrence in younger adults, positive imaging findings of numerous intrahepatic tumors with intratumoral calcifications, and slow course of the disease, are suggestive for HEHE. Radiologic features of HEHE are varied; it can present in diffuse, multifocal, or solitary nodular form. The solitary or multifocal nodular form is considered the earlier manifestation of the neoplasm. The diffuse form is considered an advanced stage because of an increase in size and coalescence of the lesions. Contrast-enhanced CT findings include marginal enhancement during the arterial phase, becoming isodense to liver parenchyma on contrast-enhanced scans, and a halo or target-like pattern of enhancement with larger lesions.8-10 MRI findings include subcapsular location and coalescence of nodules, capsular flattening or retraction, a target-like configuration, and peripheral and delayed central enhancement.11 Some reports have shown that HEHE can demonstrate intense 18F-fluorodeoxyglucose (FDG) accumulation and that FDG PET/CT is useful for tumor recurrence detection and monitoring of radiation therapeutic effect. A recent study reported the largest series of HEHE with FDG PET/CT findings in which two-thirds of the lesions showed slight to moderate FDG uptake, and the FDG uptake of one-third of the lesions was similar to that of the surrounding liver parenchyma.12

The definitive diagnosis of HEHE requires histopathologic and immunohistochemical examinations. HEHE is composed of rounded or spindle-shaped endothelial cells that can synthesize factor VIII-related antigen. The diagnosis mostly is confirmed by immunohistochemical evidence of endothelial differentiation, as demonstrated by the presence of factor Vlll-related antigen (in nearly all patients), CD34 (94%), and CD31 (86%).13

The standard treatment of HEHE has not been established because of its low incidence and indistinct malignancy characteristics, and because it frequently follows an indolent course.14 Liver transplant remains the most common therapeutic modality for nonmetastatic disease, because most patients present with multiple lesions, and most often both liver lobes are involved. In the case of localized disease, a complete resection of the tumor is preferred. In a review article by Mehrabi et al,6 the most common treatment of these patients included liver transplantation (45%), no treatment (25%), chemotherapy or radiation therapy (21%), and liver resection (9%). In 1988, Marino et al15 reported the first series of 10 patients with unresectable HEHE who were treated with liver transplantation. The first large single-center report was published from the Pittsburgh Transplant Center. Sixteen patients had a median follow-up of 4.5 years, and survival rates were 100%, 87.5%, and 73.3% at 1, 3, and 5 years, respectively. The disease-free survival rates were 81.3%, 68.8%, and 60.2%, respectively.16 Cardinal et al17 published findings of the largest single center study in which 17 patients underwent liver transplantation; 4 underwent transcatheter arterial chemoembolization (TACE); 2 underwent resection; and 2 underwent TACE followed by liver transplant. These investigators concluded that liver transplant is used for patients with advanced local disease, whereas TACE is the primary modality when extrahepatic disease or comorbid conditions prohibiting liver transplant are present. In a large multicenter study of patients with HEHE undergoing liver transplant, Lerut et al18 reported a long-term follow-up (5-30 years from moment of diagnosis) of 59 European HEHE transplant recipients. The study validates liver transplantation in the treatment of HEHE, because the 5- and 10-year post-liver transplant survival rates are 83% and 74%. They also concluded that preexisting extrahepatic disease and lymph node involvement are not contraindications to liver transplant.18 Extrahepatic involvement is present in up to 37% of patients at diagnosis, but several studies suggest that metastatic disease is not associated with a decreased overall survival.18,19 Wang et al7 reported comparable outcomes of liver resection and TACE in a retrospective study of 33 patients with localized HEHE.

Vascular endothelial growth factor (VEGF) receptors have been found in patients with HEHE. VEGF has proved to be a specific mitogen in vitro and an angiogenic factor in vivo, and anti-VEGF agents, including bevacizumab, lenalidomide, and sorafenib, may be an option for treatment of HEHE.20-23 The roles of chemotherapy and radiotherapy are difficult to assess in HEHE, mainly because of the rarity of these tumors and a lack of prospective data, although complete resolution of unresectable EHE of the neck region with radiation has been reported.24

Hemochromatosis has not been described as a risk factor for HEHE, and this is the first case report to describe a patient with hemochromatosis and HEHE. The patient presented with metastatic disease and was not deemed appropriate for transplant at the time of surgery. She was treated with single-agent gemcitabine secondary to liver dysfunction with noted worsening of her lesion and abdominal ascites. Therapy was changed to the mTOR inhibitor sirolimus with stabilization of her lesions and improvement in her liver function.

Jillian L. Scavone, PhD, Oncology Scientist/Medical Writer, has disclosed that she has no relevant financial relationships.