Appendiceal malignancies are rare and represent 1% of intestinal tumors in the United States. The role and efficacy of modern systemic therapy in advanced appendiceal adenocarcinoma has not been established. This study analyzed patients with recurrent or metastatic appendiceal adenocarcinoma in the database for Colorectal Cancer (CRC; 2005-2012). This database tracks longitudinal care for patients treated at 8 specialty centers across the Unites States. Study objectives were to describe and evaluate the efficacy of systemic therapy and investigate relationships with clinicopathologic features. Cox regression analysis was performed to identify predictors of progression-free survival (PFS) and overall survival (OS). Of 248 patients with advanced appendiceal carcinoma, 112 (45%) received systemic therapy for measurable disease and are the focus of this report. The most common chemotherapy regimens included FOLFOX with or without bevacizumab (n=39 and n=37, respectively), FOLFIRI (n=15), and single-agent fluoro-pyrimidine (n=10). Among 99 patients evaluable for best response, 39 experienced a response (response rate [RR], 39%) and 36 (36%) had stable disease. The median PFS was 1.2 years (95% CI, 1.0-1.8) and median OS was 2.1 years (95% CI, 1.6-2.3). Patients with non-mucinous histology or high-grade tumors and those who underwent nondebulking surgery had worse PFS and OS. Treatment of advanced appendiceal adenocarcinoma at NCCN Member Institutions commonly incorporates agents used for CRC. RR, PFS, and OS are comparable to those achieved in the treatment of metastatic CRC. Poor prognostic factors include nonmucinous histology or high-grade tumors and history of nondebulking surgery. 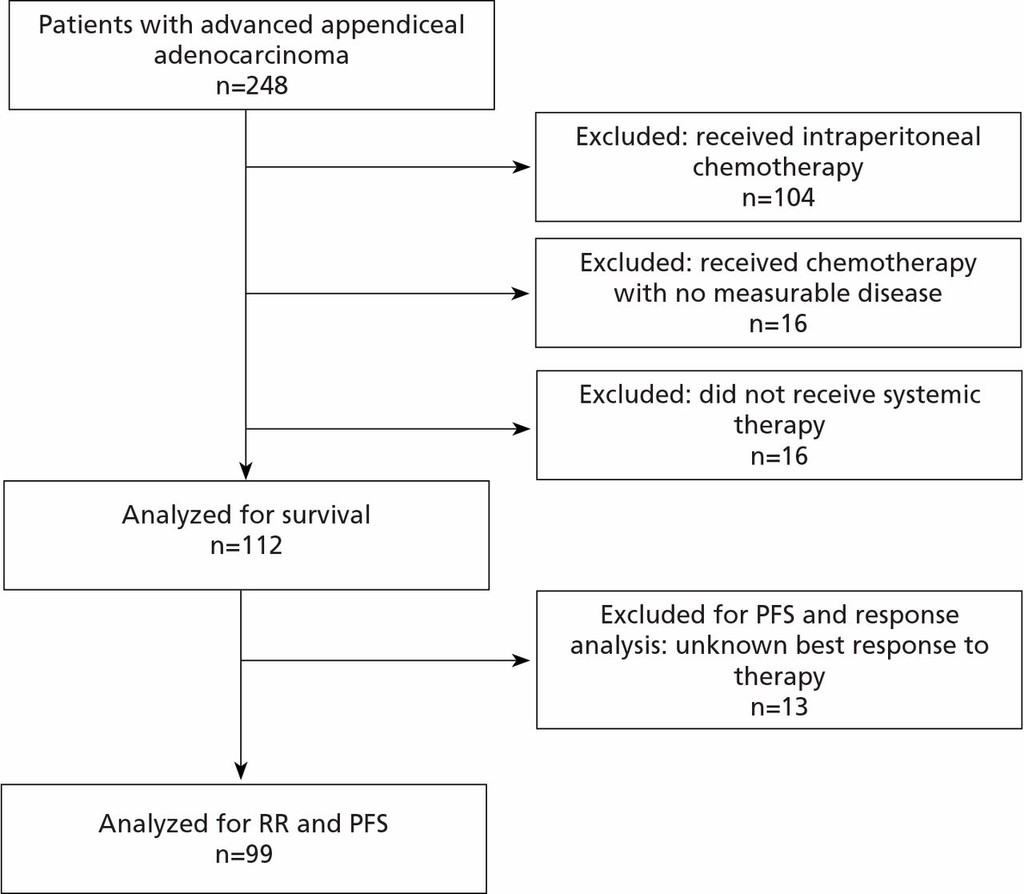 Kaplan-Meier estimates of progression-free survival (PFS; A) and overall survival (OS; B) for the entire cohort.

Kaplan-Meier estimates of progression-free survival (A) and overall survival (B) by histology.

Kaplan-Meier estimates of progression-free survival (A) and overall survival (B) by grade.

Kaplan-Meier estimates of progression-free survival (A) and overall survival (B) by surgical resection. 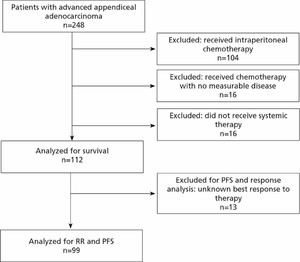