Anemia remains ubiquitous among patients with cancer. Despite a preponderance of positive data on the use of erythropoietic stimulating agents (ESAs) and intravenous (IV) iron, these agents have failed to reach their full treatment potential.1 Is this because clinicians believe that alternative therapies are safer? ESAs present a risk of thrombosis and possibly cancer progression (when high hemoglobin [Hb] values are targeted),2 but these risks are also present with red blood cell transfusions.3,4 Additionally, difficulty in interpreting iron studies may prevent clinicians from giving IV iron, when vast benefits could be realized. And although not every patient will respond to IV iron with the same vigor, those with less severe functional iron deficiency may still derive benefit. Cancer treatments are becoming more targeted, but data suggest that many new agents have the potential to produce severe anemia.5 Recognizing that present-day anemia management (using ESAs) has been vitiated by certain insurers and regulatory agencies, this editorial discusses current quandaries in managing cancer-associated anemia (CAA) that clinicians should, but may not be, aware of.

Testing for deficiencies in vitamin B9 (folate) or vitamin B12 (cobalamin) should not be reflexively performed in every patient with anemia. This practice, dictated by certain insurers, has a low yield and high cost, especially when extrapolated to all eligible patients across the United States. For example, existing data suggest that less than 1% of the US population is deficient in folate.6,7 Additionally, this practice surreptitiously makes patients who are already anemic more anemic. We hope that the data will convince payers that these tests should be considered on an individual basis.

Importantly, the response to IV iron in patients with cancer is currently best expressed as a continuum using the iron indices serum ferritin and transferrin saturation (TSAT) that have been validated in oncology clinical trials (Figure 1). Patients with little to no storage iron respond quickly to IV iron, whereas the response in patients with functional iron deficiency anemia (FIDA) can vary.

Patients with FIDA have ferritin values beyond what is required to avoid iron-restricted erythropoiesis (>30 ng/mL), and giving these patients IV iron could seem counterintuitive or even dangerous. However, clinical trial data are reassuring. In a study by Hedenus et al,8 criteria included holding IV iron if serum ferritin increased to more than 1000 ng/mL; however, no patients reached this threshold even after receiving 1000 mg in cumulative doses. In addition, no data suggest harm to patients when serum ferritin exceeds 1000 ng/mL as a result of IV iron therapy. Although we do not frequently administer IV iron to patients with serum ferritin values of 500 ng/mL or greater, our practice uses a threshold of 800 ng/mL at which IV iron therapy is withheld without exception.6

Two common IV iron dosing strategies supported by prospective cancer clinical trials include 1 large dose (≥1000 mg) as a single infusion of low-molecular-weight (LMW) iron dextran, or smaller IV iron doses (125, 200, or 300 mg) repeated weekly until 1 g cumulatively has been given. The large IV iron dose regimen offers the possibility of a single infusion with fewer clinic visits and lower costs. However, because using the high-dose strategy offers no therapeutic advantage regarding magnitude of Hb increase, we prefer smaller, repeat doses of iron because this has been better tolerated (with less arthralgia/myalgia).9 More importantly, although time to response may be shortened with 1000 mg or more as a single-dose infusion, this dosing strategy has minimal safety data.9

Role of Hepcidin and Antihepcidin Therapy

Whether hepcidin assays will replace or complement current iron studies used to diagnose and initiate treatment in CAA is unknown.10 Antihepcidin antibodies are currently in development for the treatment of anemia of inflammation11; however, these agents could add significant cost for patients with cancer as a supportive care therapy.

Conversely, studying the effect of vitamin supplementation on anemia may elucidate further mechanisms related to anemia of inflammation and present a cost-effective alternative. Vitamin C, for example, has been studied in patients undergoing hemodialysis with FIDA who have resistance to ESAs.12,13 Interestingly, when compared with IV iron, similar and notable increases in Hb have been observed with vitamin C therapy compared with intermittent IV iron. These increases may be partially explained by reduced inflammation and increased iron mobilization. Furthermore, serum ferritin declined and TSAT increased in patients undergoing hemodialysis and receiving IV ascorbic acid, making vitamin C an appealing candidate for patients with FIDA who have serum ferritin values at the high end of the spectrum. Moreover, in vitro and in vivo data from healthy volunteers have shown that vitamin D supplementation leads to a decrease in hepcidin mRNA expression and serum hepcidin concentration within 24 hours of supplementation.14

Altogether, the roles of vitamins C and D warrant further exploration in patients with cancer (with or without renal dysfunction) and FIDA or ESA hyporesponsiveness. However, as with all medicines used in patients with cancer, care must be taken to prevent decreasing the effectiveness of chemotherapeutic agents or promoting tumorigenesis.15,16

ESA biosimilars are ESAs that possess the same amino acid sequence as the original product but may contain differences in glycosylation or other posttranslational modifications.17-19 Biosimilars may not be interchanged for the innovator product, but they should produce clinical results that fall within a similar, predefined acceptable range of deviation in terms of safety, response rate, and quality of response. If or when the first ESA biosimilar is approved, it is unknown whether the FDA will approve its use in patients with cancer based on data extrapolated from other disease states. Will the biosimilar era impact oncology as much as it will nephrology? The hope is that biosimilars will reduce costs for patients and payers and increase provider comfort with ESA prescription, but only time will tell.

As archetypal chemotherapy begins to transition from myelosuppressive agents to targeted therapies aimed at minimizing off-target side effects (eg, small molecule inhibitors and monoclonal antibodies), will the definition of chemotherapy-induced anemia change? Is that time now? Few data are available to guide us. A meta-analysis by Barni et al5 showed that many small molecules or monoclonal antibodies used for solid tumors were associated with anemia. The category of targeted therapy now includes more than 40 agents. More studies are required to determine how targeted therapies will impact CAA.

Several novel agents designed to alleviate anemia through a variety of mechanisms are currently in clinical trials. Targets include stimulation of the erythropoietin receptor, alleviation of inhibitory factors restricting erythropoiesis in the bone marrow microenvironment, and reduction in inflammation or hepcidin. Unfortunately, the epomimetic peptide, peginesatide, was withdrawn from the market in 2013, shortly after FDA approval; postmarketing reports showed approximately 0.02% of patients (≈1 in 5000) died after receiving the first dose of IV peginesatide.20

Another mechanism recently identified to help combat CAA is promotion of hypoxia-inducible factor (HIF). One of 2 HIF-α subunits dimerizes with the β form to control the expression of erythropoietin when oxygen levels vary in the bloodstream.15 Inhibition of HIF-α hydroxylase, an enzyme that degrades HIF1-α subunits, is the goal of the prolyl-hydroxylase inhibitor FG-2216, which, through inhibition of this enzyme, allows HIF to continue to stimulate erythropoietin production.17,21 Moreover, HIF stabilizers allow HIF to migrate to the nucleus and act as a transcription factor for erythropoietin. When destabilized, HIF is degraded within the same cell responsible for making epoetin.

Interestingly, hepcidin is downregulated by HIF stabilizers. Therefore, HIF stabilizers could be beneficial for not only increasing epoetin levels but also mobilizing iron in patients with cancer. However, an important finding is that many other genes (>300) are regulated by HIF,17 some of which may play a role in a tumor’s ability to grow and metastasize.22-26

Because both ESAs and red cell transfusion have been shown to increase mortality in patients with cancer, we first correct iron-deficiency anemia when present. Because clinical trials using IV iron in patients with cancer have stopped monitoring outcomes after 16 weeks, the effects on long-term survival cannot be assessed. As a result, withholding IV iron for patients with FIDA is reasonable when the intent of chemotherapy is curative.

Regarding red cell transfusion, the American Association of Blood Banks recommends a conservative approach (Hb target of 7-8 g/dL in hospitalized, stable patients) to minimize transfusion-related risks, such as hypersensitivity, infection, and iron overload. However, patients with cancer were not specifically studied for this recommendation.28

Target Hb must be individualized based on comorbidities and type of treatment. In the event that iron is not indicated, we consider the use of ESAs in accordance with the APPRISE program.29 Ultimately, 2 questions must be answered when considering IV iron or ESAs: the likelihood of response (Figure 1) and whether other, safer options are likely to be effective in preventing transfusion. For patients receiving treatment with palliative intent, IV iron (with or without an ESA) should be considered initially, because many of the risks with ESAs and red cell transfusion have yet to be seen with IV iron. Future trials assessing the efficacy of IV iron in patients with cancer should assess overall survival in the cancer-specific population of interest. 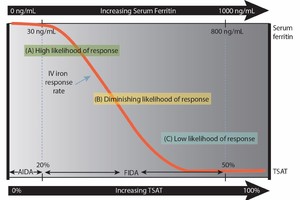