Chronic Lymphocytic Leukemia: State of the Art and Beyond

In the treatment of chronic lymphocytic leukemia (CLL), select genomic studies can assist in risk stratification of newly diagnosed patients. Chemoimmunotherapy targeting CD20 offers a survival advantage in symptomatic patients both with and without these high-risk genetic features, though patients with del(17p13.1) have poor outcomes and require specific intervention. Obinutuzumab plus chlorambucil is a treatment standard for untreated elderly patients and is superior to rituximab plus chlorambucil. In the setting of relapsed CLL, the new kinase inhibitors have the potential to completely change the treatment paradigm of CLL.

The treatment of chronic lymphocytic leukemia (CLL) is poised for change, thanks to the development of effective agents targeting the BCR signaling pathway. Meanwhile, clinicians should understand the currently recommended approaches for managing the most prevalent type of adult leukemia, according to John C. Byrd, MD, Director, Division of Hematology, Department of Internal Medicine, The Ohio State University Comprehensive Cancer Center - James Cancer Hospital and Solove Research Institute, who spoke at the NCCN 19th Annual Conference.

Most patients are diagnosed with early-stage disease and, regardless of risk factors, treatment is started only when patients become symptomatic. “There is no advantage to treating CLL before symptoms develop, irrespective of genomic features,” Dr. Byrd said. He recommended that clinicians follow the NCCN Guidelines for CLL regarding starting treatment, since unlike the International Workshop on Chronic Lymphocytic Leukaemia (iwCLL) guidelines, they do not require a lymphocyte count less than 300 x 109/L or a doubling time and thus are less likely to lead to premature treatment.

Choice of regimen is differentiated by age or functional status and by genomic features. New to the NCCN Guidelines is an emphasis on del(17p), which is particularly associated with poor outcomes and requires different management.

The value of adding rituximab to fludarabine/cyclophosphamide (FC) is now solidly established. In an updated 6-year follow-up of the German CLL8 study, the addition of rituximab to FC (FCR) significantly improved response rates, progression-free survival (PFS; 57 vs 33 months) and overall survival (OS; 69.2% vs 62.3%).1

“The majority of genetic subgroups, except for [patients with] del(17p) and those with no cytogenetic abnormalities, benefited from rituximab. The study also showed that patients negative for minimal residual disease have a very long remission from chemoimmunotherapy. We take these FCR data into consideration for younger patients,” he said.

With less evidence, but commonly used in practice, is bendamustine plus rituximab in young patients; however, the CLL10 study found this doublet to be inferior to FCR, though easier to administer.2 Recent studies suggest that favorable genotypes may have prolonged remissions, that is “a chance for cure,” with FCR, he added.

Further differentiating treatments, Dr. Byrd said he prefers fludarabine/rituximab for low-risk patients, adding cyclophosphamide for patients with del(11q) to abrogate the poor outcome associated with this mutation. Patients with del(17p) can receive FCR or high-dose methylprednisolone plus rituximab, or be enrolled in a clinical trial. Older patients should not receive fludarabine because it carries no benefit over chlorambucil; they can receive bendamustine/rituximab (more toxic, but feasible), or perhaps chlorambucil/rituximab, he said.

A New Standard of Care

The NCCN panel added the CD20 antibody obinutuzumab plus chlorambucil as a standard of care. This is indicated as first-line treatment in patients with CLL 1) without del(11q) or del(17p), both those younger than age 70 (with or without comorbidities) and those 70 or older; 2) with del(17p) (any age); and 3) with del(11q) if 70 or older, or younger than 70 with comorbidities.

“The additional cost is probably justified by more than 1 year additional progression-free survival. For the elderly, this is a better drug, and we should incorporate it,” he recommended.

Similarly, with relapsed disease, treatment is started based on symptoms. The NCCN Guidelines list many options; however, with the approval of ibrutinib, the traditional second-line therapies have largely become irrelevant. Ibrutinib, an inhibitor of Bruton’s tyrosine kinase (BTK), and idelalisib, an inhibitor of PI3K-delta, both target the BCR signaling pathway and inhibit B cell signaling in CLL (Figure 1).

Pivotal phase II studies of ibrutinib found overall response rates to be 71% in both high-risk patients with relapsed or refractory disease4 and elderly treatment-naïve patients.5 PFS rates at 26 months were 96% and 75%, respectively, and OS rates were 96% and 83%. Without adverse mutations, PFS in patients with relapsed or refractory disease was similar to that in untreated patients. “With additional followup, very few patients have progressed,” he said.

Numerous studies are evaluating ibrutinib in combination with ofatumumab, rituximab, and bendamustine/rituximab. Clinicians are encouraged to enroll patients on large studies that are still accruing, including ECOG 1912 and Alliance 041202.

For the PI3K pathway, idelalisib meets the challenge of selectively inhibiting the delta isoform, which is expressed predominantly in hematopoietic cells and has transforming potential. Responses were “remarkable” in a phase I study, seen in 91% of patients with bulky lymph nodes or spleen. Median PFS was 18 months, and toxicity was modest.

In multiple subsequent studies, idelalisib improved response rates when added to rituximab, ofatumumab, or bendamustine. Median PFS was not reached in a pivotal phase II study of idelalisib plus rituximab, compared with 5.5 months with single-agent rituximab (HR, 0.15; P<.001).6 Response rates were 81% versus 13% (P<.001) and OS at 12 months was 92% versus 80% (HR, 0.28; P=.02). Similarly, in a phase II study involving 64 untreated elderly patients, the response rate was 97% and PFS at 24 months was 93%.7 Diarrhea is common with idelalisib, but giving the drug in combination might ameliorate this side effect, Dr. Byrd suggested.

“The median progression-free survival, for patients with and without del(17p), was quite impressive,” he said. “Clearly, idelalisib in relapsed disease is more active than rituximab.”

Phase II and III studies of idelalisib in combination with bendamustine, ofatumumab, and rituximab are in progress in untreated CLL and relapsed or refractory disease. Other PI3K inhibitors (IPI-145) are also in late-stage development.

Dr. Byrd has disclosed that he receives grant/research support from Pharmacyclics. 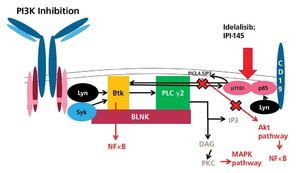