We need to change direction on therapies for unresectable or metastatic nonmelanoma skin cancers, pronounced Thomas Olencki, DO, Clinical Professor of Internal Medicine and Vice Chair of the Division of Medical Oncology, The Ohio State University Comprehensive Cancer Center - James Cancer Hospital and Solove Research Institute, Columbus, and a member of NCCN panels on genitourinary and nonmelanoma skin cancers. The approaches of the past were based on limited objective data, with no statistical significance from studies with small numbers of patients.

Treatment of Advanced Cutaneous SCC: Where Have We Been and Where Might We Go?

An assortment of approaches have been explored in the treatment of metastatic cutaneous SCC, including interferon (IFN) and 13 cis-retinoic acid, cisplatin-based chemotherapy, and dasatinib. Although initially they appeared to be appealing, a closer look showed these treatments to be less than optimal.

In the 1990s, use of combination IFN and 13-cis-retinoic acid was evaluated in more than 30 patients with heavily pretreated, advanced inoperable cutaneous SCC.1 This study showed responses in nearly 70% of patients and a median response duration of more than 5 months.1 However, the results from an adjuvant trial more than 10 years later did not support these findings in patients with this type of skin cancer.2 In fact, at a median follow-up of approximately 22 months, IFN and 13-cis-retinoic acid did not improve time to tumor recurrence, and Brewster et al2 concluded that the combination was inactive in patients with metastatic cutaneous SCC.

The use of cisplatin-based chemotherapy for advanced BCC and SCC has a similar story. Before the advent of CT scans, chemotherapy in this setting was initially appealing, Dr. Olencki said. For instance, Guthrie et al3 reported an overall response rate of nearly 70% in patients with these advanced cancers However, CT scanning showed residual disease with this treatment, and the response rate dropped. Added Dr. Olencki, “Most oncologists in this area believe that chemotherapy in general is an ineffective therapy for this disease.”

Dr. Olencki briefly mentioned the use of dasatinib for cutaneous SCC. A phase II study was conducted at his center, but was discontinued due to overwhelming fatigue, anorexia, weight loss, and pleural effusion.

Other therapies appear to offer more promise in the treatment of cutaneous SCC. Dr. Olencki discussed the combination of high-dose celecoxib and paclitaxel, cetuximab, and erlotinib. However, he noted that further research is needed to confirm early encouraging findings for these agents.

The benefits of high-dose celecoxib (Figure 1) and paclitaxel center on their apparent synergism for increased binding of bcl-2 in the tumor and increased tumor death, reported Dr. Olencki. “I tried this regimen several times on several patients, and it worked remarkably for the first 4 to 6 weeks, but it has a very high relapse rate,” he explained.

Furthermore, high-dose celecoxib has been associated with an approximately 4% increased incidence in thrombotic/embolic events in unselected patients.4 However, according to some of the cardiologists at The Ohio State University, careful cardiac screening and staging may ameliorate this risk, noted Dr. Olencki. And the addition of a statin as an anti-inflammatory agent before treatment with high-dose celecoxib may be of benefit. “There is a thought that we can decrease that 4% risk to a more manageable risk,” Dr. Olencki predicted.

The best data for use of celecoxib were presented by Elmets et al5 in 2010. In this randomized adjuvant trial, 240 patients with actinic keratosis extensive actinic damage received either 200 mg of celecoxib or placebo. These patients were at high risk for developing nonmelanoma skin cancers. Although no difference was seen at 9 months, at 11 months, a markedly statistically decreased rate of both SCC and BCC was seen in the celecoxib group.

Encouraging results have also been achieved with the use of the monoclonal antibody cetuximab.6,7 In a phase II study of patients with unresectable SCC of the skin, 36 patients received first-line cetuximab therapy for at least 6 weeks.7 At 6 weeks’ follow-up, the disease control rate was approximately 80% (70% in the intent-to-treat population). Phase III trials are needed to confirm these findings and to determine whether combining cetuximab with another agent might prolong the duration of response. For instance, a case report of a patient with bulky disease treated with the durable combination of cetuximab and paclitaxel suggested activity.8

Finally, Dr. Olencki mentioned that several case studies have shown some response with erlotinib, with minimal toxicity. This agent may be considered earlier in the course of cutaneous SCC, he added, and it has been used with imiquimod 5% cream. Erlotinib is currently being studied in the treatment of cutaneous SCC at the University of Texas MD Anderson Cancer Center.

With no standard therapy or benchmark data regarding outcomes for invasive cutaneous SCC, Dr. Olencki said, “If a patient walks in today with multifocal, noninvasive cutaneous SCC, we have enough experience with high-dose celecoxib as a single agent to warrant its use after careful screening or erlotinib in the transplant patient.” For the nontransplant patient with invasive SCC, high-dose celecoxib, erlotinib, imiquimod, and/or topical fluorouracil to symptomatic lesions can be considered, whereas for transplant-eligible patients, the option would be erlotinib with reduced immunosuppression.

Vismodegib Is a Viable Option for Unresectable or Metastatic BCC

As with many other types of cancer, the answer to effective treatment of unresectable or metastatic BCC may be in the genetic pathways. BCC is 100% mutationally driven, explained Dr. Olencki, and approximately 90% of patients with this type of nonmelanoma skin cancer have a PTCH-1 gene mutation. This gene functions as a classic tumor suppressor gene, and the sonic hedgehog is the ligand for the PTCH-1 receptor. As a result, the use of vismodegib (an inhibitor of the hedgehog pathway approved to treat unresectable metastatic or locally recurrent advanced BCC) has FDA approval in this setting, and, according to Dr. Olencki, it appears to be a “remarkable” option for those who cannot benefit from surgery.

Vismodegib was the center of a 2-arm phase II study, including a total of 63 patients with advanced regional BCC and 33 patients with metastatic BCC.9,10 The response rates were 43% in the group with regional disease and 30% in the group with metastatic disease. The median duration of response and median progression-free survival rate were similar in both groups (7.6 and 9.5 months, respectively). Dr. Olencki also noted that these criteria for response were stricter than the standard oncology definitions used, suggesting that the actual response rates may be higher for both of these groups than reported.

To improve the tolerance of clinical side effects such as muscle spasms, fatigue, anorexia, nausea, and taste changes, alternate schedules of vismodegib have been used. In patients with significant comorbid illness, dosing once or 3 times weekly may be considered. Because vismodegib has a prolonged half-life of 96 hours, schedules of Monday through Friday (with a drug holiday on Saturday and Sunday) seem to be associated with less muscle spasm.

“I have adopted this Monday through Friday as an upfront schedule and have had great success with it,” stated Dr. Olencki, “but it is not the FDA-approved schedule.” Furthermore, “vismodegib may be considered for neoadjuvant therapy, but there is no role for it as adjuvant therapy at this time,” concluded Dr. Olencki.

New Agents Are Needed for MCC

Considered to be one of the most lethal skin cancers, MCC is an aggressive atypical neuroendocrine cancer of the skin, typically seen on sun-exposed areas of elderly patients (Figure 2). Dr. Olencki noted the importance of determining that the skin cancer is MCC and not a skin metastasis from non-small cell lung cancer, which should be clarified on the pathology report. Immunohistochemical markers CK20 and CD56 tend to be positive in most cases of MCC, and neuroendocrine markers such as chromogranin, neuron-specific enolase, and synaptophysin may be present as well, he added.

The treatment landscape for unresectable or metastatic MCC has been bleak, and palliative care at diagnosis is a reasonable approach. In the first-line setting, chemotherapy (mostly with cisplatin or carboplatin and etoposide) with growth factor support is a viable option, according to Dr. Olencki. In the second-line setting, irinotecan, topotecan, and weekly paclitaxel have been used. However, response rates with chemotherapy are low, and the duration of response is often poor. “Many of these patients have diabetes and are in their 70s, and they don’t tolerate chemotherapy so well,” admitted Dr. Olencki.

Imatinib has been evaluated as a potential treatment for MCC, based on the identification of a strong c-KIT staining of this tumor.12 However, in a small phase II clinical trial, the median progression-free survival was 1 month, with a 1-year overall survival rate of just 17%.12 With no clinical value seen with the use of imatinib, the second stage of patient accrual for this trial was discontinued.

Very recently a phase II trial has opened through the Alliance group with daily cabozantinib. This drug holds promise as it has antiangiogenic activity and blocks c-met. Many new trials, including 2 trials with the PD-1 protein, are in the planning stages. Currently, there is a much more positive approach to the treatment of metastatic disease. 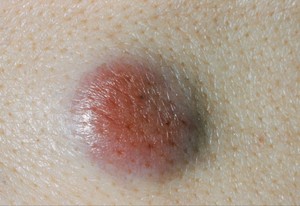