Advances in the Treatment of Non-Small Cell Lung Cancer

Clinical trial data continue to emerge on treatments in advanced non-small cell lung cancer (NSCLC), supporting the strategy that histology and molecular driver mutations should guide treatment selection. During her presentation at the NCCN 19th Annual Conference, Dr. Leora Horn highlighted 3 specific areas in which the 2014 NCCN Clinical Practice Guidelines in Oncology (NCCN Guidelines) for NSCLC focus attention: updates on the assortment of chemotherapy options, targeted therapies and how acquired resistance to epidermal growth factor receptor tyrosine kinase inhibitors appears to have become the catalyst of the development of newer-generations of agents, and the revisited role of newer immunotherapeutic options.

“Immunotherapy is one of the exciting areas being explored in lung cancer today, because traditionally it has not worked in lung cancer patients,” according to Leora Horn, MD, MSc, Associate Professor of Medicine, and Clinical Director, Thoracic Oncology Research Program, Vanderbilt University, Nashville, and a member of the NCCN Non-Small Cell Lung Cancer (NSCLC) Panel. Newer immunotherapies under investigation were among the featured topics during Dr. Horn’s presentation at the NCCN 19th Annual Conference, joining maintenance chemotherapy and treatment of patients with acquired resistance to tyrosine kinase therapy with newer generation inhibitors.

According to the 2014 NCCN Clinical Practice Guidelines in Oncology (NCCN Guidelines) for NSCLC, many chemotherapy drugs are useful for treating patients with advanced-stage NSCLC. Among them are platinum agents (eg, cisplatin, carboplatin), taxanes (eg, paclitaxel, albumin-bound paclitaxel, docetaxel), and newer agents such as pemetrexed and gemcitabine.

“There is no significant difference in overall survival between several different chemotherapy regimens,” noted Dr. Horn. However, she added that it is worthwhile to obtain a second biopsy in patients with NSCLC where histology cannot be accurately classified, as it may show the histopathologic classification of the tumor. In addition, molecular testing should be performed on all patients with adenocarcinoma as it provides even further information, revealing whether the tumor is negative for epidermal growth factor receptor (EGFR) and anaplastic lymphoma kinase (ALK) mutations, for instance.

Histology guides treatment choices, and clinical trial data tend to support this approach. For instance, the phase III trial conducted by Scagliotti et al1 compared cisplatin plus gemcitabine with cisplatin with pemetrexed in chemotherapy-naive patients with advanced-stage NSCLC. No difference was seen in terms of overall and progression-free survival between these study arms. However, improvement in overall survival was seen with cisplatin/pemetrexed in those with non-squamous cell carcinoma and conversely with cisplatin/gemcitabine in those with squamous cell carcinoma. “This was the first hint that we had showing survival differences between histology,” stated Dr. Horn.

The selection of appropriate maintenance therapy depends on tumor histology, presence of gene mutations or rearrangements, and patient performance status. According to the 2014 guidelines, maintenance therapy is an option for select patients with tumor response or stable disease and is not considered the standard of care for all patients. Category 1 options in continuation maintenance therapy include single-agent bevacizumab and single-agent cetuximab, although the latter agent is rarely used.

Molecular subsets of lung cancer are defined by driver mutations, Dr. Horn noted. For example, KRAS mutations appear to be the most common, occurring in about 15% to 25%, followed by EGFR mutations in 10% to 35% of NSCLC cases, followed by ALK rearrangements in 3% to 7%.

The IPASS study selected patients who were clinically thought to harbor an EGFR mutation (Asians with adenocarcinoma histology who were never or light former smokers).5,6 The presence of an EGFR mutation was a strong predictor of better outcomes with gefitinib. Of those with EGFR mutation-positive disease, more patients responded to gefitinib than to chemotherapy (71% vs 47%).5 Conversely, of those with EGFR mutation-negative disease, more patients had a response to chemotherapy than to gefitinib (24% vs 1%). In addition, treatment-related differences observed for progression-free survival in the EGFR mutation-positive subgroup were not apparent for overall survival.6

Since the IPASS trial, many trials have compared EGFR tyrosine kinase inhibitors (TKIs) with chemotherapy in the first-line treatment of patients with EGFR mutations, revealed Dr. Horn. “All have shown an improvement in progression-free survival but no significant difference in overall survival,” she added.

Acquired resistance to EGFR TKIs has multiple mechanisms (Figure 1), and approximately half of them center on the second-site T790M mutation.7-9 Dr. Horn said that the type of disease progression (whether single site, slow multisite, or rapid multisite) will determine the treatment strategy.

The question of whether continuing with TKIs at disease progression is worthwhile was raised. According to the 2014 guidelines, patients may continue to have benefit from erlotinib or gefitinib after disease progression. Data supporting continued TKI treatment were revealed at the 2012 ASCO meeting.10 This study was reportedly the first to show that continuation of an EGFR TKI with chemotherapy significantly increased the response rate in patients with advanced NSCLC and acquired TKI resistance compared with chemotherapy alone.

Dr. Horn briefly reviewed some newer-generation TKIs and combinations of targeted therapies that are showing encouraging results in overcoming drug resistance. First, the combination of afatinib and cetuximab produced responses in about 30% and a disease control rate of almost 90% in patients with EGFR-mutant NSCLC, based on the early results of a phase 1B trial.11 “This is a fairly good option in patients with acquired resistance,” noted Dr. Horn. The overall progression-free survival was 4.7 months, although the duration was 8 months for those with a confirmed response, she added. There are no phase III data yet, but other studies are exploring this combination further.

AZD9291, an oral, irreversible inhibitor of EGFR that contains EGFR-TKI-sensitizing and resistance mutations (T790M) has resulted in encouraging early data, and an update is expected at the 2014 ASCO meeting. “What is interesting about these third-generation agents is that they do not seem to hit wild-type EGFR the same [way] that we see with erlotinib and afatinib, so we don’t see the high rates of grade 3 rash or diarrhea with this agent,” stated Dr. Horn. Similar activity against the T790M mutation and side effect profiles have been seen with another third-generation EGFR TKI known as CO01686, she added.

The ALK/MET inhibitor crizotinib has shown tumor responses in ALK-positive lung cancer, based on the early findings of a phase I study.12 In this study of almost 150 patients with ALK-positive advanced-stage NSCLC, the objective response rate was about 60%, and the median progression-free survival was 9.7 months. This agent was superior to second line docetaxel or pemetrexed in terms of progression-free survival and response rate in patients with progression after first-line chemotherapy. Dr. Horn noted that crizotinib is being studied in the first-line setting, and updated data is anticipated at the 2014 ASCO meeting.

In another study, another ALK inhibitor, ceritinib (LDK378), induced durable responses in most patients with advanced, ALK-positive NSCLC, including those whose disease was resistant to crizotinib.13 Approximately 70% of patients responded to ceritinib, and in the subset of those with crizotinib-resistant disease, the overall response rate was 73%. Dr. Horn noted this as “impressive.” “Ceritinib crosses the blood-brain barrier, and we have seen responses in patients with central nervous system disease,” she added. It recently received FDA approval.

Programmed death 1 (PD-1) protein and one of its ligands, PD-L1, play a pivotal role in the ability of tumor cells to evade the host’s immune system and have become targets in cancer therapy.14,15 PD-1 is a T-cell immunoreceptor and immune checkpoint that inhibits the activity of T cells, and PD-L1 hinders autoimmunity and protects peripheral tissues, through inhibiting T-cell proliferation, cytokine production, and cytolytic function, explained Dr. Horn. PD-L1 is broadly expressed in NSCLC, with the prevalence of positive PD-L1 staining approximating 45% of adenocarcinomas and 50% of squamous cell carcinomas, she added.

Dr. Horn focused attention on 2 immunotherapeutic agents in development for which fairly good phase I data are available: the PD-1 inhibitor nivolumab15 and the PD-L1 inhibitor MPDL3280A.16

Nivolumab, an immunoglobulin G4 monoclonal antibody, was given to more than 120 patients with heavily pretreated NSCLC. The median overall survival across all dose cohorts was 9.2 months and 10.1 months for those with squamous cell carcinoma and nonsquamous cell carcinoma, respectively.15 The overall response rate was about 17% in all patients, and stable disease was also seen in many patients, noted Dr. Horn. “There seemed to be no significant difference based on age, gender, performance status, histology, and molecular status,” she added.

Fatigue was the most common adverse event reported with nivolumab, with diarrhea and anorexia noted in some patients as well. Two drug-related deaths from pneumonitis occurred early in the trial, and 6% of patients in the overall population developed pneumonitis, a serious toxicity that needs to be monitored when these agents are used and treated with steroids.

Promising results have also been obtained with the use of the anti-PD-L1 treatment MPDL3280A, according to the recent findings of a large phase I expansion trial.16 Eighty-five patients with NSCLC took part in this study. Rapid and durable responses were seen in patients with both squamous and non-squamous NSCLCs, stated Dr. Horn. There was a higher response rate in patients with tumors that were positive for expression of PD-L1 and who had a history of smoking, but no difference in response was seen based on molecular status. Unlike with nivolumab, no severe pneumonitis was reported with this agent.

Dr. Horn has disclosed that she has received grants or research support from Astellas Pharma US and consulting fees from Clovis, Bristol-Myers Squibb Company, and Helix BioPharma Corporation. She has also served as a scientific advisor for Puma Biotechnology, Inc and received a speaker fee from Boehringer Ingelheim. 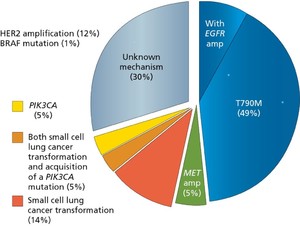