All clinicians completing this activity will be issued a certificate of participation. To participate in this journal CE activity: 1) review the learning objectives and author disclosures; 2) study the education content; 3) take the posttest with a 66% minimum passing score and complete the evaluation at http://education.nccn.org/node/45599; and 4) view/print certificate.

Two months after starting vemurafenib, restaging scans showed a slight decrease in his lymphadenopathy but unchanged orbital, cardiac, and chest wall masses. One month later, he developed worsening blurred vision, proptosis, and chest wall pain. Scans showed widespread progression of metastatic disease, although his atrial mass was unchanged in size on echocardiogram. He was then enrolled on a clinical trial evaluating combination therapy with experimental MEK and Akt inhibitors. Two months later he developed progressive eye and chest wall pain, fatigue, and hypoxia with exertion. Imaging showed further disease progression, including 2 new brain metastases, for which he underwent stereotactic radiosurgery. Cardiac MRI showed slight enlargement of his atrial metastasis; CT angiogram did not reveal pulmonary embolism or parenchymal abnormalities. He underwent resection of the orbital mass for palliation of refractory pain and proptosis, and ipilimumab was initiated. After receiving 2 doses, he developed anorexia, nausea, intermittent confusion, and progressive functional decline. He was referred to hospice care and subsequently died in May 2013.

Malignant melanoma is an aggressive cutaneous malignancy that caused more than 9000 deaths in 2012.1 A wide variety of clinical presentations may occur when patients develop metastatic or recurrent disease, ranging from local or in-transit skin involvement to isolated single-organ metastases to widely disseminated metastatic disease. Melanoma may involve every organ, including the heart. The presence of visceral metastases portends a poor prognosis, although recently approved therapeutic options may induce disease regression and extend survival for a prolonged duration in a minority of patients. Two important management issues for clinicians treating metastatic melanoma are illustrated in this case: selection of first-line therapy for BRAFV600E-mutant melanoma and management of cardiac metastases.

Therapeutic options for advanced melanoma are classified into 2 broad categories. Targeted, small molecule inhibitors are effective in patients with BRAFV600E-mutant melanoma, which constitute approximately 50% of all melanoma cases.2,3 Vemurafenib, a specific BRAF inhibitor, prompts rapid and often dramatic tumor regression in 50% to 60% of patients with objective RECIST responses, and improves overall survival (OS) compared with cytotoxic chemotherapy.4,5 Dabrafenib, another selective BRAF inhibitor, was FDA-approved in May 2013 and seems to have equivalent activity in BRAFV600-mutant melanoma.6 Trametinib, an MEK inhibitor, also demonstrates a survival advantage in BRAF-mutant melanoma, with a response rate of 20% to 30%, and was also FDA-approved in May 2013.7 Combined inhibition of BRAF and MEK with dabrafenib and trametinib produces responses greater than 70% and seems to delay the onset of acquired resistance, with a median progression-free survival of 9.4 months compared with 5.8 months for dabrafenib monotherapy (P<.001).8 Unfortunately, resistance to these agents inevitably develops and almost all patients experience disease progression within 2 years of therapy initiation.

The second major class of therapeutics is immune-based and includes ipilimumab and interleukin-2 (IL-2), which have activity regardless of BRAF mutational status. Ipilimumab is a monoclonal antibody that blocks the immune checkpoint CTLA-4 (cytotoxic T-lymphocyte antigen 4) and has demonstrated a survival advantage in patients with melanoma compared with an experimental peptide vaccine.9 In contrast to small molecule inhibitors, ipilimumab may induce delayed responses that may be preceded by tumor enlargement. Autoimmune toxicities, including colitis, endocrinopathies, hepatitis, and dermatitis, may complicate therapy. High-dose IL-2 has been used for many years and produces prolonged disease-free survival in 6% to 8% of patients.10 Its severe associated toxicities require inpatient administration at an experienced center and may only be used in patients with normal organ function.11 These immune-based therapies induce disease regression in a minority of patients, although these responses are often durable.10,12,13

The most effective first-line treatment strategy for patients with BRAFV600-mutant melanoma has not been clearly defined because the agents have not been directly compared prospectively. Additionally, whether initial therapy influences the antitumor efficacy of subsequent treatments is unclear. Future trials are being planned to determine the best sequence of therapy in a randomized phase III clinical trial for untreated patients with melanoma, and will compare the best combination of targeted agents with the best immunotherapy approach, followed by planned cross-over at disease progression. These trials will provide critical insight into the management of patients with melanoma. In the interim, several retrospective studies provide some guidance for clinicians.14,15

A retrospective analysis evaluated 274 patients treated with BRAF inhibitors, 32 of whom had been treated with immune therapy.14 The group initially treated with immune therapy had favorable OS compared with the entire cohort (19.6 vs 13.4 months). Of the 40 patients who received BRAF inhibitors followed by ipilimumab, only half could finish all 4 doses; median progression-free survival and OS were 2.7 and 5.0 months, respectively. An additional retrospective study evaluated 28 patients treated with vemurafenib followed by ipilimumab; 12 patients experienced rapid disease progression and were unable to receive all 4 doses of ipilimumab because of symptomatic deterioration.15 Brain metastases, elevated lactate dehydrogenase, and an ECOG performance status of 1 predicted a poor response to ipilimumab. These studies suggest that the efficacy of immune-based therapies in the setting of BRAF inhibitor resistance is limited for at least a subset of patients.

If immune-based therapy is selected for initial treatment, whether IL-2 or ipilimumab is superior is unclear. Ipilimumab is generally more tolerable and can be administered to an elderly and frail population, although the volume of experience is less and responses are not evaluable until 24 weeks after therapy initiation (unless rapid and obvious disease progression occurs earlier). IL-2 has been used for many years and responses may be evaluable at approximately 8 weeks, although severe acute toxicities limit its use to selected patients at experienced centers. Analysis of the pivotal ipilimumab versus peptide vaccine trial showed similar survival benefit in those with prior IL-2 therapy compared with those without.9 However, theoretical concerns exist about the converse treatment order, such as IL-2 producing delayed immune-related adverse events from ipilimumab, or that subsequent use of IL-2 may be precluded by ongoing ipilimumab toxicity.

Taken together, the general consensus by experts is that patients who are relatively asymptomatic with low-volume BRAFV600-mutant melanoma should receive immune-based therapies, either with ipilimumab or IL-2, as first-line treatment to experience long-term benefit.16 Patients who are highly symptomatic with either large-volume or rapidly progressing disease should be treated initially with vemurafenib or dabrafenib. Patients whose disease presentation falls in the middle of this spectrum may be treated with immune-based therapies or BRAF inhibitors. The advent of newer immune checkpoint inhibitors targeting programmed cell death-1 receptor or its ligand (PD-1/PD-L1; including nivolumab, pembrolizumab, or MPDL3280A) as monotherapy or in combination with ipilimumab may change this paradigm in the near future, because both rapid and durable responses have been observed in early trials.17-19

Melanoma has a propensity for cardiac involvement, generally through hematogenous spread. Lung and breast carcinomas also commonly involve the heart, usually through direct extension of the tumor. Autopsy series show an incidence of cardiac metastases in up to 64% of patients who die with metastatic melanoma.20-22 Involvement is often multifocal and may involve the pericardium, epicardium, or myocardium, usually on the right side.23 Most cases are clinically silent and commonly undetectable on imaging. Even massive involvement (“charcoal heart”) may confer few symptoms.24,25 Occasionally, asymptomatic metastases may be detected with staging CT or PET scans. In symptomatic patients, more definitive imaging with echocardiogram or cardiac MRI may be performed for surgical planning or to evaluate for outflow obstruction.23 When clinically apparent, these cardiac metastases commonly cause dyspnea and peripheral edema from obstruction of forward flow or pericardial effusion. Chest discomfort and tachycardia may also be presenting symptoms; cases of acute aortic occlusion from melanoma embolism, heart block, and acute coronary syndrome have also been reported.26-28

Therapeutic options for cardiac metastases include systemic therapies or local measures. Systemic therapies are generally preferred for asymptomatic lesions. BRAF inhibitors often cause rapid disease regression in patients with BRAFV600E-mutant melanoma and may be an effective treatment in patients with symptomatic cardiac involvement. Ipilimumab is another therapeutic option, although symptomatic lesions have an extremely high risk of progression before a benefit is seen, even in patients who experience a response. IL-2 causes significant cardiac stress and is generally not administered in the setting of symptomatic cardiac metastases.

Surgical resection of cardiac metastases may be an effective palliative option, and even curative in some cases. Resection is not commonly performed because of the invasive nature of the surgery and usual presence of concurrent widespread metastatic disease. However, appropriately selected patients may derive prolonged benefits from resection, which may allow for administration of systemic therapy.29 Additionally, referral to a cardiothoracic surgeon is strongly encouraged for the rare cases of isolated cardiac involvement, because resection may be curative.30 Surgical techniques are evolving and include aggressive strategies, such as cardiac autotransplantation.31 Radiation therapy is an additional therapeutic option that may cause tumor shrinkage or prolonged stabilization, and has been used successfully.32 The present patient seemed to derive palliative benefit from radiation, with minimal growth of his atrial mass over several months despite widespread systemic worsening. Clinicians should consider referring patients with symptomatic cardiac metastases to a cardiothoracic surgeon or radiation oncologist for local treatment. Additionally, cardiac involvement should be part of the differential diagnosis when patients with melanoma present with cardiopulmonary complaints. Nevertheless, until systemic therapy is greatly improved, the control of cardiac metastases will remain difficult and will confer a poor prognosis in most cases.

Ms. Gianola has disclosed that she has no relevant financial relationships. 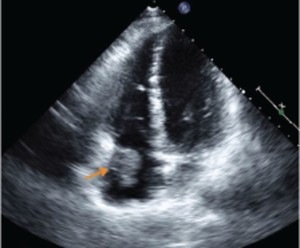