In 2008, the FDA approved bendamustine hydrochloride (TREANDA, Cephalon, Inc., North Wales, PA), an intravenously administered alkylating agent, for the treatment of patients with chronic lymphocytic leukemia and indolent B-cell non-Hodgkin lymphoma that progressed during or within 6 months of treatment with rituximab or a rituximab-containing regimen.

Bendamustine is a cytotoxic alkylating agent that contains a purine and an amino acid antagonist; it is a bifunctional mechlorethamine derivative that also contains a purine-like benzimidazole ring.1 The effects of bendamustine are caused by the cross-linking of double- and single-stranded DNA, which disrupts DNA synthesis and induces apoptosis. The exact mechanism of action of bendamustine remains unknown.1,2

Bevacizumab is a recombinant humanized antibody directed against vascular endothelial growth factor (VEGF). It is approved for the treatment of patients with colon, lung, kidney, breast (outside the United States), and brain (glioblastoma multiforme, only in the United States) tumors.

Study participants were patients seen in the Department of Investigational Cancer Therapeutics (Phase I Clinical Trials Program) at The University of Texas MD Anderson Cancer Center with a histologically confirmed diagnosis of cancer that was refractory to or had relapsed after standard therapy, or for which no standard therapy was available that increased survival by at least 3 months. Other criteria were ECOG performance status of 2 or less; adequate renal function (serum creatinine ≤2.0 mg/dL, or calculated glomerular filtration rate ≥40 mL/min if creatinine >2.0 mg/dL); adequate bone marrow function (absolute neutrophil count ≥1000 cells/mcL; platelet count ≥75,000 cells/mcL), unless these abnormalities are caused by bone marrow involvement; adequate hepatic function (total bilirubin ≤1.0 mg/dL [≤3.0 mg/dL if patient had Gilbert syndrome]); and alanine aminotransferase levels equal to or less than 3 times the upper limit of normal. If patients had liver metastases, a total bilirubin level of 5 mg/dL or less and alanine aminotransferase level equal to or less than 5 times the upper limit of normal were allowed. Patients were at least 3 weeks from previous cytotoxic chemotherapy, and 5 half-lives or 3 weeks from targeted or biologic therapy, whichever was shorter. All female patients of childbearing age had to have a negative human chorionic gonadotropin urine test.

All patients signed informed consent forms fully disclosing the investigational nature of the trial before enrollment. The study protocol was approved by The University of Texas MD Anderson Cancer Center Institutional Review Board (ClinicalTrials.gov identifier: NCT01152203).

All patients were treated at MD Anderson Cancer Center. Treatments consisted of intravenous bendamustine in escalating doses from 70 to 100 mg/m2 (days 1 and 2) and intravenous bevacizumab (10 mg/kg; days 1 and 15) (Table 1). Each treatment cycle was 28 days. Patients remained on treatment until unacceptable toxicity, disease progression, or patient consent withdrawal.

DLT was assessed during the first treatment cycle and was defined as (1) any grade 3 or 4 nonhematologic toxicity, as defined in the most current version of the NCI’s Common Terminology Criteria for Adverse Events (NCI CTCAE 4.0),12 even if expected and believed to be related to the study medications (except nausea and vomiting, electrolyte imbalances responsive to appropriate regimens, and alopecia); (2) any grade 4 hematologic toxicity lasting 3 weeks or longer despite supportive care or associated with bleeding and/or sepsis; (3) any grade 4 nausea or vomiting lasting longer than 5 days despite maximum antinausea regimens; (4) any other grade 3 nonhematologic toxicity, including symptoms/signs of vascular leak or cytokine release syndrome but excluding alopecia; (5) grade 4 thrombocytopenia; (6) any grade 4 neutropenia lasting more than 7 days (as defined by the NCI CTCAE) despite supportive care or associated with bleeding and/or sepsis; or (7) any severe or life-threatening complication or abnormality not covered in the NCI CTCAE. If more than 33% of patients at any particular dose level developed DLT, the treatment was to continue at the previous dose level.

Dose-Escalation Schedule and Distribution of Patients, Treatment Cycles, and DLTs

Patients were monitored before starting the first dose and then every 4 weeks through medical history, physical examination, hematology and chemistry laboratory studies, urine analysis, urine pregnancy test (if applicable), vital signs, and radiologic imaging scans (within 30 days of first dose; at the end of cycle 2; and then every 2 cycles thereafter).

If a grade 3 bendamustine-related toxicity occurred, patients were treated with regular medical support and their therapy continued once the severity corrected to grade 2 or less. A weekly assessment was performed and therapy was held for a maximum of 3 weeks. If grade 3 toxicity occurred (DLT), the bendamustine dose was decreased by 25% to 50%. If grade 3 or 4 toxicity occurred again, the treatment was discontinued. No dose adjustment for bevacizumab was to be made.

The study was designed using a conventional “3 + 3” study design, followed by an expansion phase. Evaluation of toxicity at baseline and during the study was performed following the Cancer Therapy Evaluation Program’s active version of the NCI CTCAE.13 The use of growth factors was accepted during the clinical study.

From July 2010 to December 2012, 43 patients with advanced cancer were registered on protocol. One patient became ineligible before initiation of therapy because of gastrointestinal bleeding. Forty-two patients have been treated. Their median age was 60 years (range, 17-80). The cohort consisted of 23 women and 19 men. The most common tumor types were colorectal cancer (n=9), head and neck cancer (n=8), non-small cell lung cancer (NSCLC; n=6), and breast cancer (n=5) (Table 2). The median number of prior therapies was 4 (range, 1-10). Prior therapies are listed in Supplemental Table 1 (available online, in this article, at JNCCN.org). 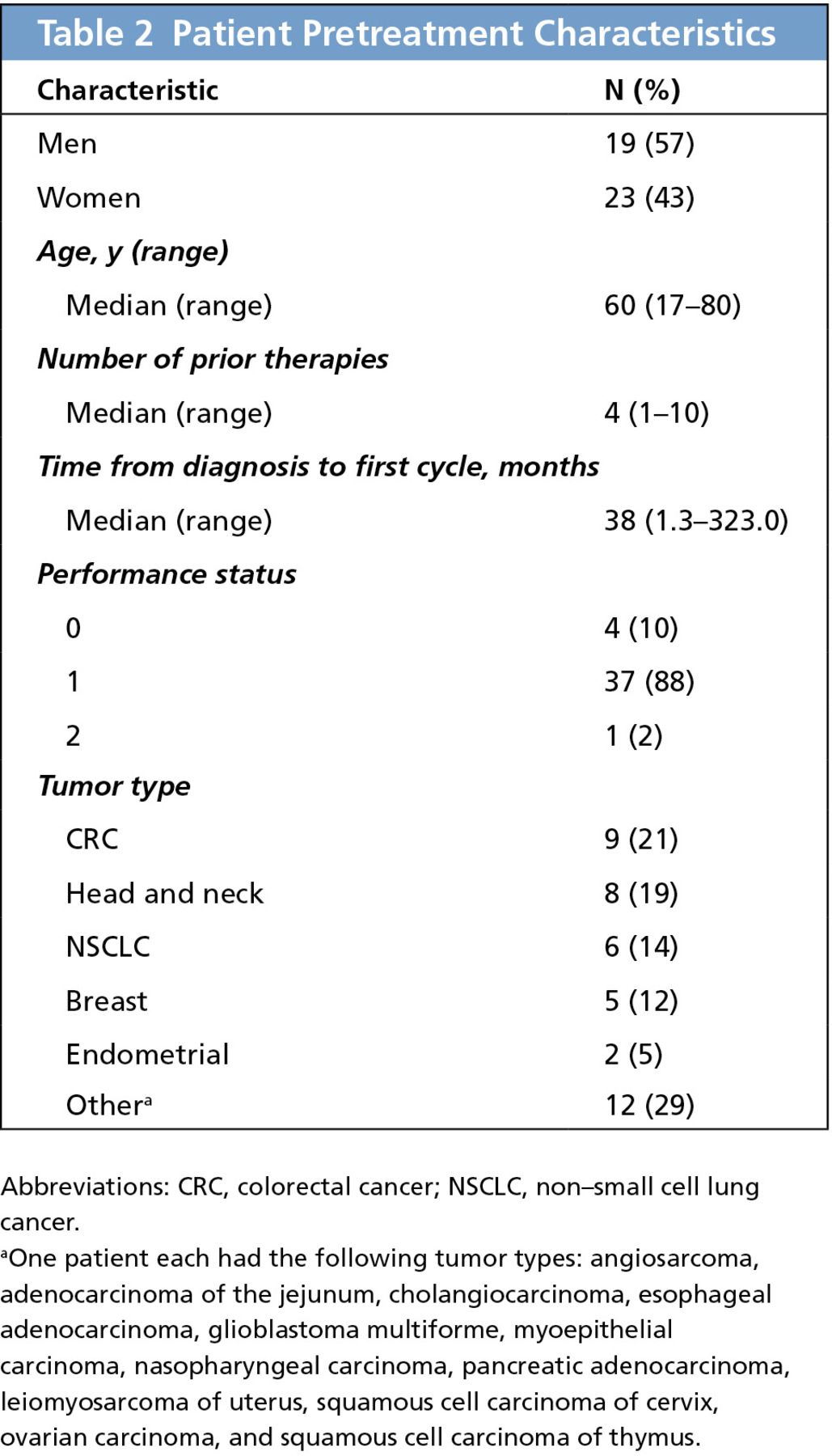 Toxicity Profile at the Recommended Dose

Of the 32 patients treated at the MTD, 29 were evaluated for response (1 patient was lost to follow-up, 1 had toxicity, 1 did not reach restaging). Of these 29 patients, 18 (62%) had stable disease, including 2 (7%) who had stable disease for 6 months or more (5 of these 18 patients with stable disease are still receiving treatment on study).

Among the 2 patients who had stable disease for 6 months or more, the first was a 65-year-old woman with adenoid cystic carcinoma of the head and neck who was diagnosed with this disease in August of 2000. Prior therapies were left neck dissection, T2 vertebrectomy, radiation therapy to T2, right hepatectomy for liver metastases, left neck dissection (level 2-5), T1-T2 laminectomy, T2 radiation therapy, lenalidomide and valproic acid (10 cycles), and erlotinib (3 cycles). This patient remained on therapy for 9 months (8 cycles). She was taken off study because of disease progression. The second patient was a 71-year-old man who was diagnosed with non-small cell lung adenocarcinoma in December of 2008. Prior therapies were right middle lobectomy; pemetrexed, carboplatin, and bevacizumab; erlotinib and c-Met inhibitor; and docetaxel and gemcitabine. He was treated on protocol for 7.1 months (5 cycles). He discontinued the treatment because of disease progression. 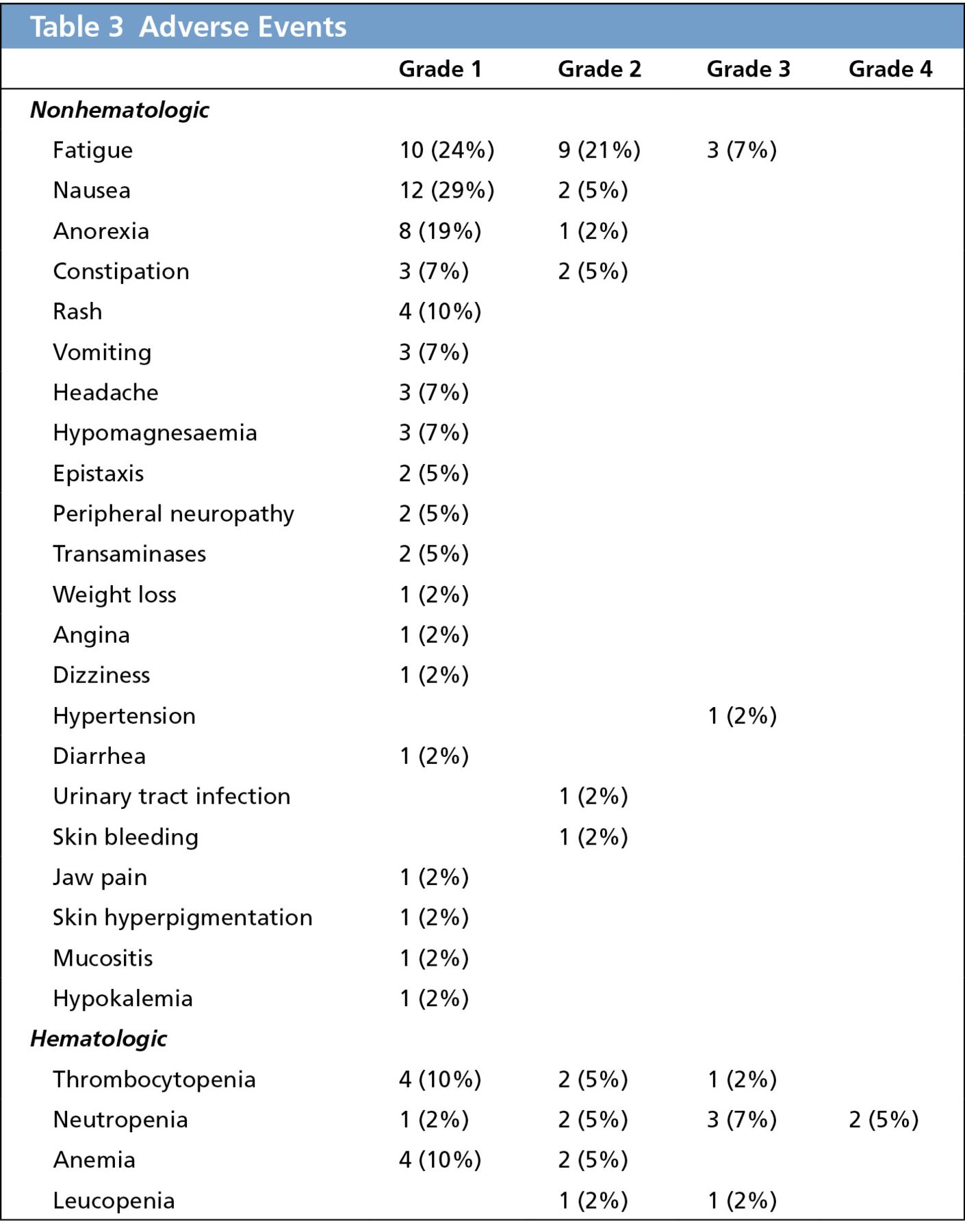 Of the 42 patients treated, 29 had disease progression. The median time to progression was 2.4 months (95% CI, 2.1-5.2) (Figure 2). Thirteen patients were censored at the time of this analysis, but they did not have evidence of progression (6 were still on study, 2 withdrew consent, 3 came off study because of toxicity, and 2 were lost to follow-up).

This is the first clinical trial to investigate the combination of bendamustine and bevacizumab in patients with advanced solid tumors. Overall, this regimen was well tolerated. The most common toxicities were fatigue, nausea, thrombocytopenia, anorexia, rash, and constipation. Nine (21%) of 42 patients had grade 3 toxicities, which included fatigue, hypertension, neutropenia, and thrombocytopenia. Grade 4 neutropenia was noted in 2 patients, but none experienced any DLT. The toxicity profile of this regimen was consistent with that in a previous study, which reported that the most common toxicities were myelosuppression and gastrointestinal adverse effects.15

Taking into consideration that patients had a median of 4 prior therapies, and that 6 patients are still receiving treatment on protocol, this combination regimen yielded disease stabilization in selected patients with various tumor types (Table 5). Overall, 2 patients, 1 with NSCLC and 1 with adenoid cystic carcinoma of the head and neck, had stable disease for 6 or more months. The latter patient was the 65-year-old woman whose disease had progressed after 10 cycles of lenalidomide and valproic acid, and subsequently after 3 cycles of erlotinib. Her disease stabilization with bendamustine and bevacizumab for 9 months indicated that this regimen may have antitumor activity in this disease.

Previous studies have demonstrated the activity of bendamustine in advanced breast cancer. In a phase II trial, bendamustine was given once weekly to patients with advanced breast cancer for 3 weeks; 13 (48%) of 27 evaluable patients experienced a response (5 having a partial response and 8 experiencing stable disease for >6 months). In another phase II study using bendamustine on days 1 and 2 of a 4-week treatment course, 27% of patients had complete or partial tumor responses.11 In the current study, only 5 patients with breast cancer were treated, and no objective response was noted, probably because they were heavily pretreated (median number of therapies, 6) (Supplemental Table 1, patients 15, 17, 28, 31, and 41; available online, in this article, at JNCCN.org). In previous studies of bendamustine in breast cancer, patients had received 0 to 2 prior lines of therapy.6,8 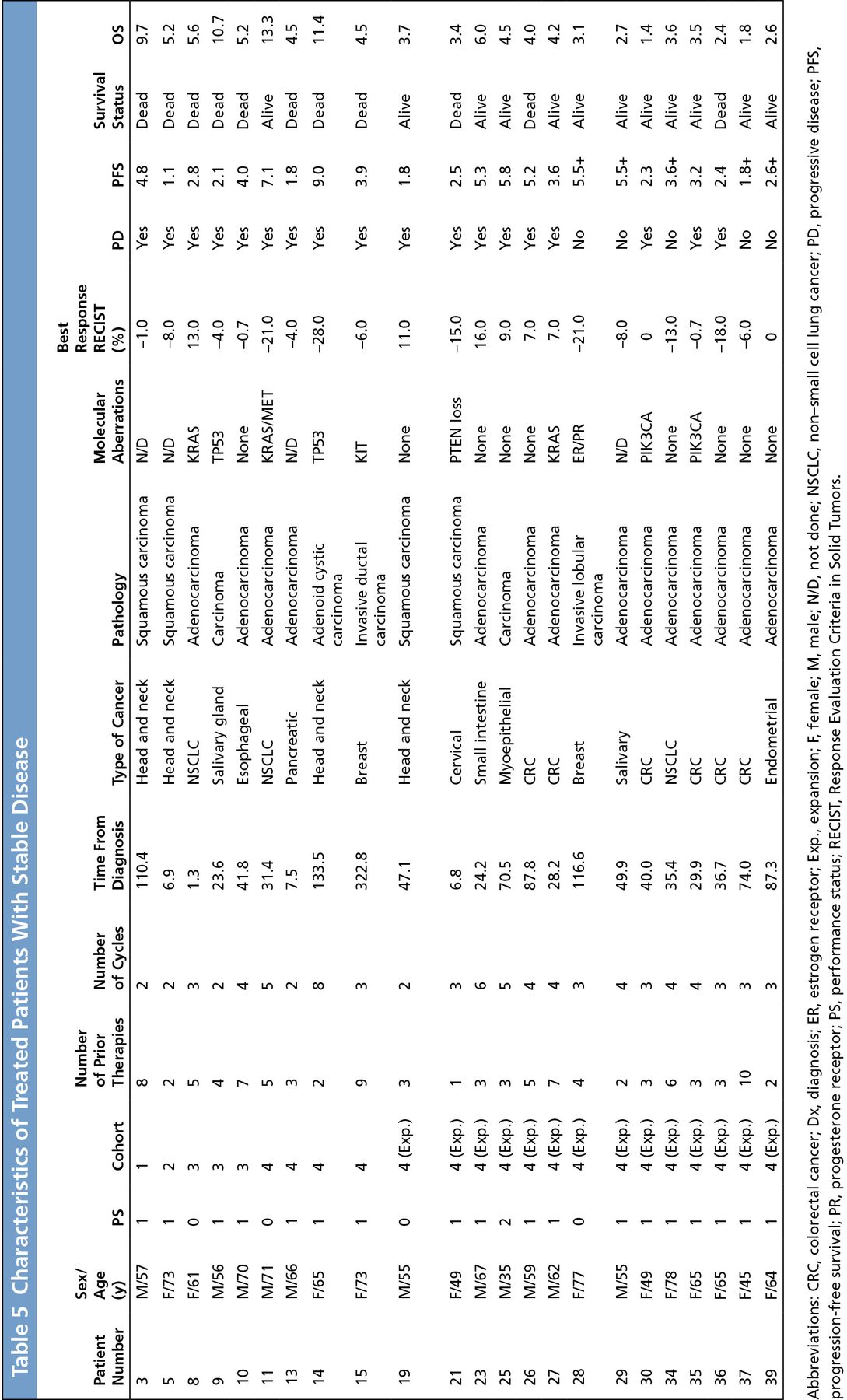 Results of the current trial demonstrate that the combination of bendamustine and bevacizumab is well tolerated. No DLT was noted in patients treated with intravenous bendamustine at 100 mg/m2 (days 1 and 2) and at 10 mg/kg (days 1 and 15), the maximum dose tested. Although the study is still ongoing, prolonged disease stabilization with bendamustine and bevacizumab was seen in patients with adenoid cystic carcinoma of the head and neck and NSCLC. The finding of disease stabilization in this heavily pretreated patient population suggests that this combination may have antitumor activity if used earlier in the disease course in selected tumor types. 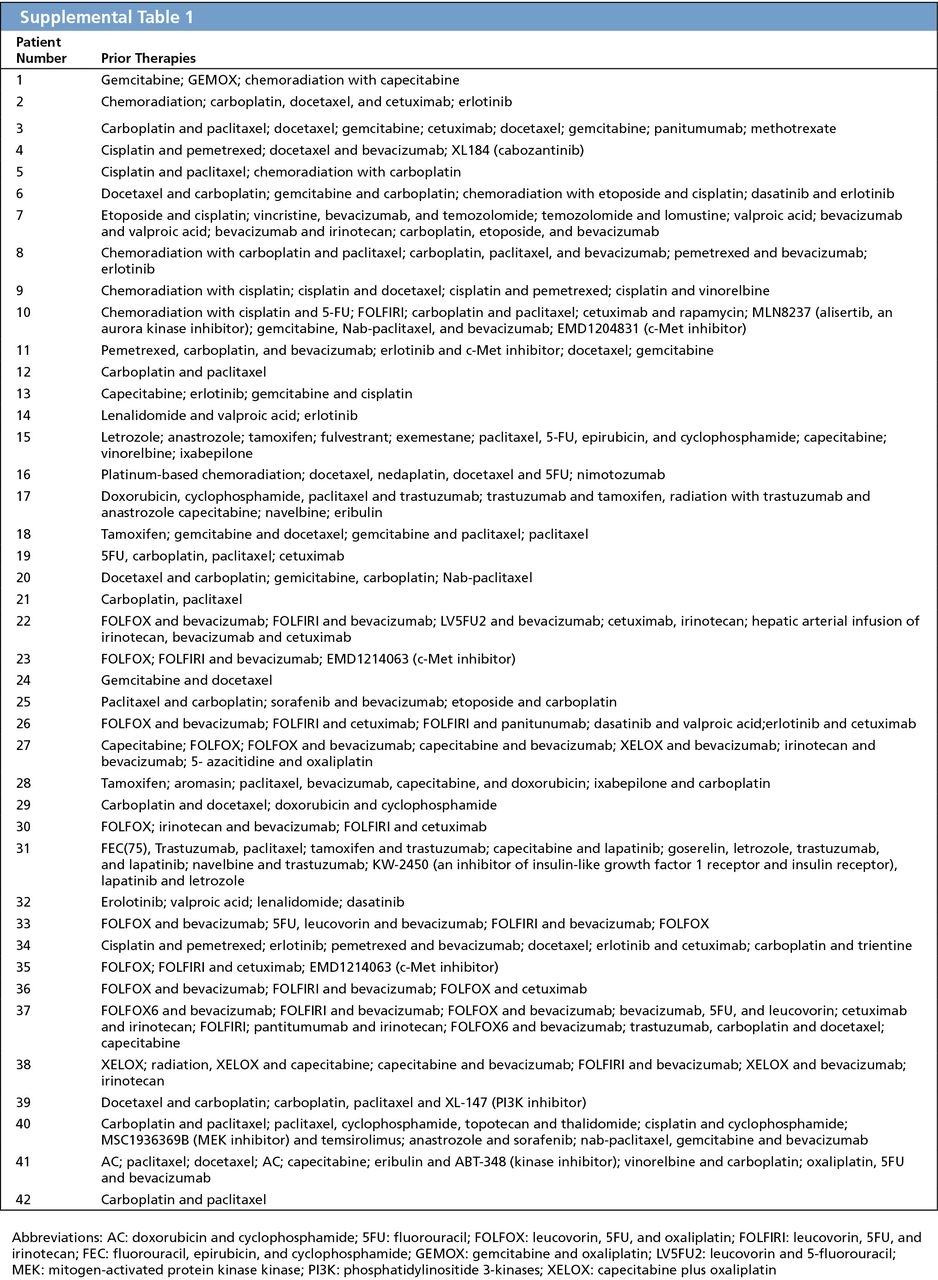 This study was approved and funded by the NCCN from general research support provided by Cephalon, Inc. d/b/a Teva Pharmaceuticals. 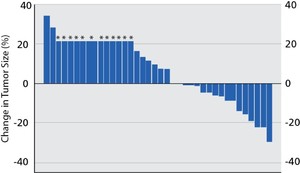 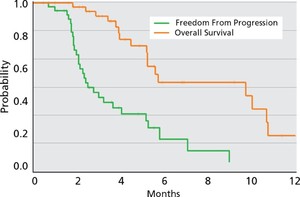