Lung Stereotactic Body Radiotherapy for Early-Stage NSCLC in Patients With Prior Pneumonectomy: A Case Report

Stereotactic body radiotherapy (SBRT) has become the standard of care for patients with medically inoperable early-stage non-small cell lung cancer (NSCLC). A paucity of published data exists regarding the safety of SBRT use in patients with prior pneumonectomy. This report describes 2 patients with NSCLC and prior pneumonectomy who were treated with lung SBRT and experienced a favorable treatment response with no major adverse treatment effects. The data presented herein are promising and provide early evidence that lung SBRT is a safe and feasible option in this subset of patients.

NCCN designates this journal-based CME activity for a maximum of 0.50 AMA PRA Category 1 Credit(s)™. Physicians should claim only the credit commensurate with the extent of their participation in the activity.

All clinicians completing this activity will be issued a certificate of participation. To participate in this journal CE activity: 1) review the learning objectives and author disclosures; 2) study the education content; 3) take the posttest with a 66% minimum passing score and complete the evaluation at http://education.nccn.org/node/56621; and 4) view/print certificate.

As of 2012, non-small cell lung cancer (NSCLC) became the third most common cancer in the United States, with more than 220,000 new cases reported annually, and it remains the number one cause of cancer-related death, with 160,000 deaths per year.1 Approximately 15% of these patients are diagnosed at an early stage,1 but because of medical comorbidities, many of these patients are not candidates for surgical resection. Stereotactic body radiotherapy (SBRT) has been shown to be an excellent alternative to surgical resection, with local control and overall survival rates comparable to those of surgery,2,3 and is considered the standard of care for medically inoperable early-stage lung cancer.4

Patients who have undergone surgical resection for early-stage lung cancer are at risk of developing a second primary lung cancer, at a reported lifetime incidence of up to 20%.5,6 Thus, patients with prior pneumonectomy are at risk of developing a second cancer in the remaining lung. Although surgical excision is a potentially curative option in this setting, most patients with a prior pneumonectomy are poor candidates for a second surgical resection because of loss of pulmonary reserve from the prior surgery. Furthermore, many of these patients have significant underlying comorbidities, which further increase their perioperative risk. Although multiple alternatives to lobectomy are available, such as radiofrequency ablation, wedge resection, and conventionally fractionated radiotherapy, SBRT is often the best option because it is less invasive and provides superior local control and lower rates of treatment complications.7–10 This is especially the case in patients with prior pneumonectomy. Although SBRT has been shown to be safe, with little resultant decline in pulmonary function and low rates of serious radiation-induced lung injury,2,11–15 few data exist regarding the safety of SBRT in patients who underwent prior pneumonectomy.

This article reports on 2 cases of patients with prior pneumonectomy treated with SBRT for new primary lung tumors.

A 70-year-old man with a history of stage II (T3N0M0) left NSCLC treated with left pneumonectomy presented with a 1-year history of progressive hemoptysis. He reported a baseline history of dyspnea on exertion for many years. He was not on supplemental oxygen. His past medical history was significant for a 60-pack-year smoking history. His left pneumonectomy was performed 7 years prior. Physical examination revealed an absence of breath sounds on the left and decreased lung sounds and mild expiratory wheezing. Laboratory evaluation was unremarkable.

A CT scan of the chest revealed an irregular opacity in the right upper lobe measuring 5.9 × 2.7 cm. A PET/CT scan showed increased metabolic activity within the mass, with a standardized uptake value maximum of 5.2. A transbronchial biopsy of the lesion showed adenocarcinoma with a lepidic growth pattern. Pulmonary function testing revealed a 1-second forced-expiratory volume (FEV1) and a diffusion capacity (DLCO) at 21% and 40% of the expected values, respectively. Because of the patient’s poor lung function, he was not believed to be a surgical candidate and was referred for radiotherapy.

His radiation oncologist recommended SBRT. The patient underwent treatment simulation using a 4-dimensional CT (4D-CT) technique. An internal target volume was created based on the 4D-CT and a 5-mm margin was added to create a planning target volume (PTV). The dose prescribed to the lesion was 5000 cGy in 5 biweekly fractions, and a 7-field intensity-modulated RT plan was used (Figure 1). Orthogonal pair kV imaging and cone-beam CT were used for setup verification before each treatment fraction. Respiratory gating was using during treatment to account for breathing motion. The percent volumes of lung receiving 5 Gy (V5) and 20 Gy (V20), and the mean lung dose (MLD) were 17%, 6%, and 354 cGy, respectively.

The patient completed radiotherapy without any acute sequelae. A 3-month follow-up chest CT revealed a slight interval reduction in the size of the lesion from 5.9 × 2.5 cm to 5.9 × 2.0 cm. As of the patient’s follow-up visit at 8 months after SBRT, his hemoptysis had resolved. He had not experienced any worsening of his baseline dyspnea and did not require oxygen supplementation.

A 68-year-old man with a history of stage II (T2N1M0) NSCLC treated with pneumonectomy was found to have a right lower lobe lung nodule on a chest radiograph. He was asymptomatic and denied any change in his baseline respiratory status.

His other past medical was significant for a 30-pack-year smoking history, atrial fibrillation, and recurrent pneumonia. His previous lung cancer was treated with pneumonectomy followed by adjuvant cisplatin and docetaxel 2 years prior. His physical examination was remarkable for an absence of lung sounds on the left side of the chest. The right lung was clear to auscultation.

The right lung nodule increased in size on CT scan from 4 to 10 mm over a 1-year period. A PET/CT scan did not show hypermetabolic activity within the lesion. Pulmonary function testing revealed an FEV1 and a DLCO at 41% and 60% of the predicted values, respectively. His case was presented at a multidisciplinary tumor board, and because of his severe emphysema, surgical intervention and even transcutaneous biopsy were felt to be too risky. Thus, the consensus agreement was that SBRT was the most appropriate treatment.

The patient underwent SBRT treatment planning and delivery in the same manner as the patient presented in Case 1. The prescribed dose was 4800 cGy in 4 biweekly fractions, and a 5-field intensity-modulated RT plan was used. The V5, V20, and MLD were 18%, 3%, and 303 cGy, respectively.

The patient did well clinically and did not develop any worsening of his baseline respiratory status until 16 months after SBRT, when he presented to the emergency department with acute onset dyspnea, cough, and hemoptysis. A CT scan of the chest revealed consolidation of all 3 lobes of the right lung. A sputum culture was positive for methicillin-resistant Staphylococcus aureus. He was admitted and started on intravenous antibiotics. Unfortunately, he did not respond to medical therapy and his respiratory status progressively worsened. His hospital course was further complicated by uncontrollable atrial fibrillation and he eventually experienced cardiac arrest and expired despite resuscitative measures.

SBRT is the standard of care for medically inoperable NSCLC and its use has become widely adopted in the United States.4 However, the comorbidities that put patients at risk for operative morbidity and mortality often lead to concerns for radiation-related toxicity among treating radiation oncologists. Although numerous reports2,11,12 have demonstrated the safety of SBRT in patients with underlying comorbid conditions with intact lungs, limited data exist regarding the safety of SBRT in patients with a previous pneumonectomy.16 To the authors’ knowledge, this article is the first report of such patients treated in North America.

The patients in this report tolerated treatment well without any significant radiation-related lung toxicity or pulmonary function decline. Neither of the patients required supplemental oxygen after therapy. The second patient did expire after therapy, although the clinical picture of lobar consolidation with leukocytosis and positive sputum cultures suggests that infection was the likely cause rather than radiation toxicity. Furthermore, SBRT showed favorable treatment outcomes with no evidence of disease progression in either of the treated lesions. This is remarkable considering that these patients would have otherwise not been candidates for curative surgical therapy in many centers because of poor underlying lung function.

Several studies reporting on various dosimetric predictors for lung toxicity have been published.17–19 Commonly used normal lung constraints include the V20 and MLD.20,21 For instance, the dose constraints used for the 2 patients in this report were V20 of 5% or less and MLD of 5 Gy or less. However, these constraints were derived in patients with 2 lungs, and whether these same predictors can be applied to patients with prior pneumonectomy is unknown. Because no radiation-related lung events occurred in these 2 patients, no conclusions can be made regarding dosimetric predictors in this subset of patients. Studies involving larger groups of patients with documented radiation-related lung injuries are needed for this type of analysis.

The question of optimal management for patients with a new diagnosis of lung cancer and prior pneumonectomy poses a dilemma for radiation oncologists concerned with providing definitive therapy while balancing concerns for toxicity. The data presented are promising and suggest that lung SBRT is a safe and feasible option in patients similar to those described. Further research with larger patient cohorts and longer follow-up is needed to confirm these preliminary findings. 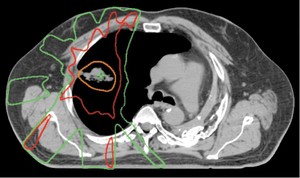