Although the association of pure red cell aplasia (PRCA) and aplastic anemia with thymoma is well-known, acquired amegakaryocytic thrombocytopenia (AAMT) is not a recognized paraneoplastic manifestation of thymoma. This report discusses a patient with recurrent thymoma complicated by myasthenia gravis, PRCA, and AAMT. Both PRCA and AAMT are diagnosed after a thymoma recurrence, 11 years after complete resection of the initial tumor and 9 months after chemotherapy for the relapsed disease. Both PRCA and AAMT responded to immunosuppression with cyclosporine, corticosteroid, and an abbreviated course of antithymocyte globulin, achieving a very good erythroid response and a complete remission for AAMT, suggesting that AAMT, although extremely rare, can be an immune-mediated paraneoplastic manifestation of thymoma.

All clinicians completing this activity will be issued a certificate of participation. To participate in this journal CE activity: 1) review the learning objectives and author disclosures; 2) study the education content; 3) take the posttest with a 66% minimum passing score and complete the evaluation at http://education.nccn.org/node/56855; and 4) view/print certificate.

The association of pure red cell aplasia (PRCA) and aplastic anemia (AA) with thymoma is well documented. However, acquired amegakaryocytic thrombocytopenia (AAMT) is not a well-recognized paraneoplastic manifestation of thymoma. This report discusses a patient with recurrent thymoma complicated by myasthenia gravis (MG), PRCA, and AAMT several years after the initial diagnosis; both PRCA and AAMT responded successfully to immunosuppressive therapy.

A 31-year-old Iranian man underwent thymectomy (complete resection) for thymoma in 1999. In 2009, he experienced blurry vision, diplopia, muscle fatigue, and, later, left ptosis. He was subsequently diagnosed with MG and treated with pyridostigmine. Chest CT scan revealed an anterior mediastinal mass and pleural-based nodules, for which he underwent resection in September 2009. Pathologic evaluation revealed thymoma with invasion to the lung parenchyma, pericardium, and soft tissue. Postoperative imaging revealed multifocal gross residual disease in the pleura.

Cyclophosphamide, doxorubicin, cisplatin, and prednisone (CAPP) was initiated in November 2009. Before chemotherapy, his CBC test was normal. Restaging CT scans in January 2010 showed that the pleural masses had reduced in size. Chemotherapy was discontinued and the patient was placed on observation. In August 2010, a CBC test revealed a WBC count of 9700/mcL, hemoglobin (Hb) level of 12.6 g/dL, and platelet count of 200,000/mcL.

A diagnosis of PRCA and AAMT was established. The patient was initiated on prednisone, 60 mg (1 mg/kg) daily and cyclosporine, 200 mg twice daily. The dosage of cyclosporine was adjusted to keep the serum level between 150 and 400 ng/mL. Through the first week of January 2011, he remained transfusion-dependent, at which time equine antithymocyte globulin (ATG) at 40 mg/d for a 4-day infusion was added. Pre-ATG skin testing was negative. However, toward the end of day 1 of infusion (>80% of the volume was completed) ATG was stopped because of anaphylaxis. The patient was treated with additional steroids and antihistamines. His Hb level and platelet count increased gradually and he became transfusion-independent. In August 2011, his CBC results revealed a WBC count of 8800/mcL, Hb level of 12.0 g/dL, and platelet count of 221,000/mcL. Cyclosporine was discontinued in September 2011.

Two months later, his Hb level and platelet count decreased again. Bone marrow biopsy showed relapsed PRCA and AAMT. He was then restarted on cyclosporine, 300 mg/d, and his Hb level and platelet count subsequently increased. In June 2012, CBC showed a WBC count of 8400/mcL, Hb level of 12.4 g/dL, and platelet count of 177,000/mcL, and the cyclosporine dosage was reduced to 200 mg/d. Since August 2010, imaging studies showed slow disease progression of the pleural metastases; however, because the burden of disease was low and the patient was asymptomatic, chemotherapy was withheld. However, in October 2012, a staging chest CT revealed interval progression of left pleural metastases accompanied by back pain. Ultimately, the decision was made to reinitiate CAPP chemotherapy with 4 planned cycles.

The patient experienced an initial response to therapy, as evidenced by a CT scan in late January 2013 showing interval improvement. Notably, while on monthly CAPP therapy, the patient experienced a platelet nadir of 7000/mcL in February 2013 and received a platelet transfusion. He also reached a Hb nadir of 7.6 g/dL in March 2013. These values were believed to represent chemotherapy-related myelosuppression, and chemotherapy was held after receiving 3 cycles of CAPP. In April 2013, a CBC test revealed a WBC count of 7100/mcL, Hb level of 11.1 g/dL, and platelet count of 199,00/mcL. The patient ultimately experienced disease progression, as evidenced by a subsequent restaging CT scan in March 2013. An MRI of the spine in April 2013 also indicated a paraspinal mass at the T11–T12 level.

He then underwent a left upper lobectomy along with pleurectomy and paraspinal mass resection with foraminotomy, and received 4 units of packed red blood cells during the intraoperative and postoperative periods. Subsequent CT scans have indicated no presence of disease. Cyclosporine was discontinued in July 2013. He was last seen in November 2013 and his Hb level was 11.9 g/dL, WBC count was 5100/mcL, and platelet count was 213,000/mcL.

Although thymomas represent the most common tumor of the anterior mediastinum, accounting for 50% of tumors in this location,1 overall they are a rare tumor with an annual incidence of 0.15 cases per 100,000 person-years in the United States.2 Thymomas are slow-growing neoplasms that have benign cytologic features, with metastases generally confined to adjacent sites, including the pleura and pericardium.3

The role of the thymus in immune function is well described, particularly regarding T-cell development. T-cell progenitors, which originate in the bone marrow, travel to the thymic cortex and migrate inwardly. During this journey, these cells undergo selection events to ensure both their recognition of self-major histocompatibility complex (MHC) molecules, known as positive selection, and their tolerance of self-peptides presented via MHC complexes, known as negative selection.4 Cortical thymomas resemble thymic cortex histologically and functionally, and are therefore capable of participating in these T-cell selection events and the subsequent export of these cells into the periphery.5 Furthermore, thymomas are capable of presenting epitopes to adjacent histologically normal cells despite a reduction of autoimmune regulator and MHC class II expression in thymoma cells.6 As a result of these defective neoplastic cells participating in the regulation of T-cell development, a tremendous potential exists for aberrancy in T-cell immunity.7

Therefore, it is not surprising that a well-known association exists between thymoma and autoimmune disorders. Several studies suggest that autoimmune disease will be diagnosed with thymoma in 30% of patients, and up to 50% of patients who undergo thymectomy will be diagnosed with 2 or more concomitant autoimmune diseases,4 of which MG is the most common. MG is estimated to occur in approximately 50% of patients with predominantly cortical-type thymoma.8 Several theories abound regarding the cause of autoimmune disorders,4 and include a tendency toward release and circulation of immature CD4+ T cells that have bypassed critical steps for the induction of self-tolerance9,10; underexpression of HLA-DR in neoplastic thymic epithelial cells, resulting in abnormal positive and negative selection11; and the initiation of humoral autoimmune cascades (CD4+ initiated B-cell autoantibody production) by thymoma-derived, self-reacting CD8+ cytotoxic T cells.4,12

Cases of autoimmune hematologic phenomena have also been documented. Several hypotheses regarding the mechanism of thymoma-associated myelosuppression have been suggested. Some suggest a T-cell invasion of marrow with preferential cytotoxicity of precursor cells, such as a CD34+-directed attack in AA or an erythroblast-directed attack in PRCA.13,14 Others propose an indirect mechanism of humoral-based suppression of peripherally released growth factors, such as erythropoietin.13,15 The most common of these cytopenias is PRCA, which is seen in up to 5% of patients with thymoma4 and is thought to result from T-cell mediated damage of erythroid progenitors or precursors.16 Thymoma-associated PRCA has shown a mixed response to thymectomy and immunosuppression.17–20 However, a recent Japanese study showed that 19 of 20 patients with thymoma and PRCA experienced a response to cyclosporine alone or cyclosporine-containing regimens.21

Although patients with thymoma have previously been documented to have thrombocytopenia, this has mostly been secondary to AA or immune thrombocytopenic purpura.22–24 This patient had no evidence of AA because his bone marrow biopsy showed a 20% cellularity with normal WBC precursors and adequate granulopoiesis. Immune thrombocytopenic purpura bone marrow often shows increased megakaryocytes as a compensatory mechanism for peripheral platelet destruction. In contrast, the patients’ bone marrow biopsy showed a dearth of megakaryocytes, consistent with a diagnosis of AAMT. Previous case reports have documented patients with thymoma-associated AAMT.25–27 In the first 2 cases, PRCA was also present. The first patient eventually developed AA within 3 months of AAMT diagnosis.25 The second patient was treated with steroids that improved thrombocytopenia but failed to correct the anemia.26 The third case presented with severe thrombocytopenia and strikingly few megakaryocytes in the bone marrow. Despite treatment with prednisolone and blood transfusion, the patient died. At autopsy, thymoma was discovered.27

This case represents a rare association of thymoma with not only MG and PRCA but also AAMT. Previous case reports have indicated successful treatment of AA and PRCA with ATG and cyclosporine, both of which were attempted in this case. Although this patient did not tolerate the full course of ATG therapy, subsequent continuation of cyclosporine and steroid therapy was successful in treating the PRCA and AAMT. Therefore, although this case marks the third documented instance of concomitant thymoma-associated PRCA and AAMT, it represents the first successful correction of both abnormalities and offers novel evidence supporting cyclosporine-based regimens in patients with these conditions. Perhaps an abbreviated course of ATG may be sufficient enough for thymoma-associated PRCA and AAMT.

Miranda Hughes, PhD, Oncology Scientist/Senior Medical Writer, has disclosed that she has no relevant financial relationships. 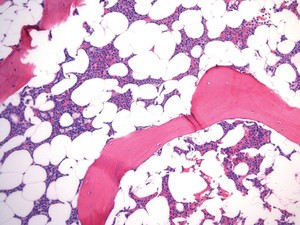 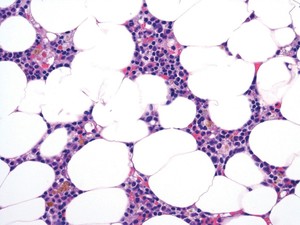 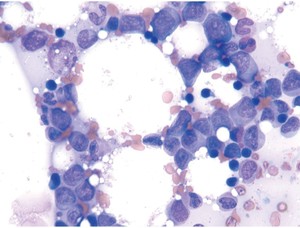