Most patients with ovarian cancer require systemic therapy upfront and again on recurrence. Treatment advances over the past decade have been few, but bevacizumab prolongs disease remission, if not survival. Other targeted agents have not been effective, but emerging data for experimental agents suggest this outlook may change. In her presentation at the NCCN 18th Annual Conference, Dr. Deborah K. Armstrong reviewed findings supporting intraperitoneal chemotherapy, the use of bevacizumab, the use of neoadjuvant chemotherapy, and the potential of poly (ADP-ribose) polymerase (PARP) inhibitors and other newer agents.

Most patients with ovarian cancer are diagnosed with advanced-stage cancer. Debulking surgery followed by chemotherapy is recommended. The standard front-line regimen is 6 cycles of paclitaxel plus carboplatin, with docetaxel a reasonable substitution for paclitaxel if neuropathy is an issue, according to Deborah K. Armstrong, MD, Associate Professor of Oncology, Gynecology and Obstetrics at The Sidney Kimmel Comprehensive Cancer Center at Johns Hopkins.

However, dose-dense (weekly) paclitaxel may be more effective, she said. In the JGOG 3016 study, although the weekly paclitaxel regimen was more toxic, median progression-free survival (PFS) improved to 28.2 months from 17.5 months with the conventional schedule (hazard ratio [HR], 0.76; P = .0037); overall survival (OS) was not reached with weekly delivery, compared with 62.2 months (HR, 0.79; P = .039).1,2 Because outcomes in the control arm were surprisingly good, the results remain controversial pending the results of a confirmatory North American trial, Dr. Armstrong added.

Patients with low-volume disease (after optimal surgical debulking) benefit from intraperitoneal delivery of chemotherapy, but it increases toxicity and requires strong nursing support. The rationale is to expose residual peritoneal tumor to high concentrations of drug for prolonged periods of time. Pivotal comparison studies have shown that risk of recurrence is cut by at least 20% with intraperitoneal over intravenous delivery of chemotherapy. In GOG 172, median OS was 65.6 months with intraperitoneal chemotherapy—the longest reported in a randomized phase III trial—versus 49.7 months with standard treatment.3 In a recent analysis of GOG trials, patients who received optimal debulking had a median OS of 110 months (127 months in GOG 172).4

Data from the most recent GOG and international trials show that patients with optimal debulking treated with intraperitoneal therapy show the best survival rates. “We are talking about a median survival for patients with advanced disease of 9 to 10 years now, and even suboptimally debulked patients have a median survival of about 3 years,” Dr. Armstrong noted. “But, to get to intraperitoneal therapy, you need to have effective surgery first.”

“We found that if you optimally debulked [tumors] (either by primary or interval surgery), [these patients] did better, but, interestingly, the overall debulking rate was very low in this population, around 20%,” she added. “Most surgeons hope to have complete cytoreduction in at least half their patients. This indicates that, for patients who do not receive good surgery, neoadjuvant chemotherapy may be just as effective.” Because median OS was about 30 months in each arm—significantly lower than seen in most GOG trials—the benefit of neoadjuvant chemotherapy is being further studied in randomized trials.

Optimal Use of Bevacizumab in the First-Line Setting

Meanwhile, the use of bevacizumab in first-line therapy remains controversial, Dr. Armstrong said, as is reflected by the NCCN’s category 3 recommendation. Category 3 signifies, “Based upon any level of evidence, there is major NCCN disagreement [> 25 % of panel members] that the intervention is appropriate.”

For recurrent disease, secondary debulking is reasonable only when the lesion can be completely excised, but systemic therapy is universally appropriate. Treatment for patients with platinum-resistant disease (platinum-free interval < 6 months) is sequential single-agent non-platinum chemotherapy; combination therapy does not add benefit. For platinum-sensitive disease (platinum-free interval > 6 months), the standard practice is to treat with a platinum agent; doublets improve response rate, PFS, and possibly OS, she said.

Pegylated liposomal doxorubicin is recommended based on the GCIG CALYPSO trial (N = 864), in which platinum-sensitive patients who received liposomal doxorubicin/carboplatin had a median PFS of 11.3 months versus 9.4 months with paclitaxel/carboplatin (HR, 0.82; P <.001), with far less alopecia (7% vs 84%).10 It is now one of Dr. Armstrong’s preferred agents, along with paclitaxel, topotecan, and gemcitabine (Table 1). 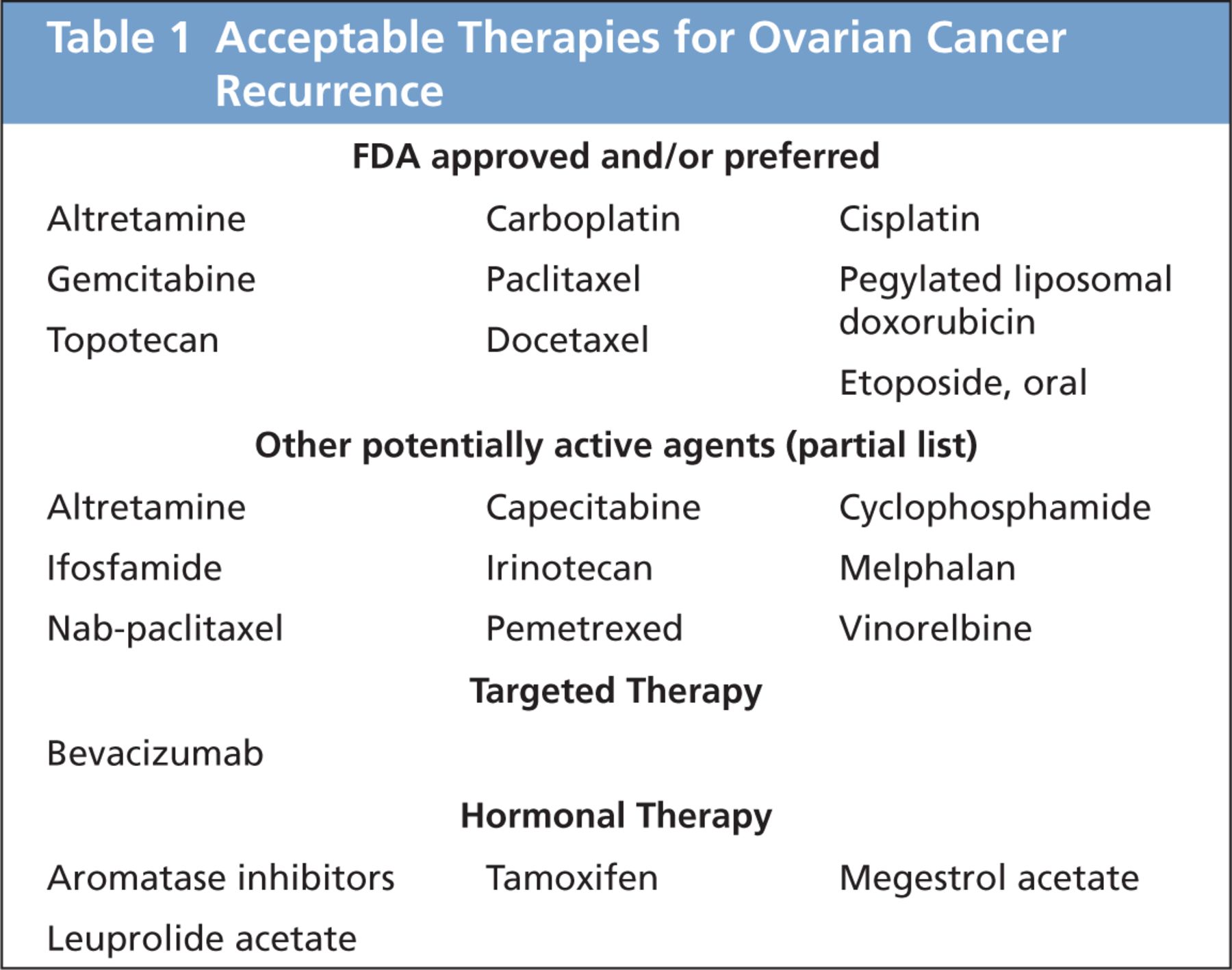 The OCEANS trial (N = 484) evaluated the addition of bevacizumab to gemcitabine/carboplatin and showed a 52% improvement in PFS (HR, 0.484; P <.0001), although OS was approximately 33 months in each arm11,12 “The data showed that bevacizumab is not adding as much as we would hope,” Dr. Armstrong commented. The carboplatin/gemcitabine/bevacizumab triplet has received a category 2B recommendation (> 50% but < 85% of Panel Members feel the intervention is appropriate) as an additional preferred regimen in the NCCN Guidelines.

In studies involving patients who had received heavy pretreatment and who had platinum resistance, response rates with bevacizumab have ranged from 16% to 24%, and 6-month PFS rates have been 27% to 56%. The best outcomes were in combination with metronomic oral cyclophosphamide. However, gastrointestinal perforation has emerged as a potential risk, seen in 11% of patients in one study.13 Clinicians should consider this risk when prescribing.

“What may change our thinking is the phase III AURELIA study [N = 361],” she added. Patients with recurrent platinum-resistant disease received non-platinum chemotherapy or the same plus bevacizumab until progression.14 A near doubling in response rate and median PFS—from 3.4 to 6.7 months—was achieved with bevacizumab (HR, 0.48; P <.001), she noted.

“It is reasonable to think of this combination when you want to get rid of disease quickly,” she advised. Other targeted therapies have not been as effective, she added.

Folate receptor-alpha could be an important target, as it is expressed in 90% of ovarian cancers. Virtually all patients experience substantial declines in CA125 with the combination of farletuzumab/carboplatin/taxane,15 a regimen now being evaluated in randomized phase III trials. A drug that specifically binds to the folate receptor, EC145, is also promising, based on phase II data that showed, in combination with pegylated liposomal doxorubicin, a doubling in median PFS with the drug, from 11.7 to 21.7 weeks (HR, 0.626).15,16

“Perhaps the best way to use a PARP inhibitor is for maintenance,” Dr. Armstrong maintained. This hypothesis is being further evaluated in a multinational study. Veliparib is now also being evaluated in various combinations and schedules. Preclinical and early clinical results indicate strong activity in patients who carry the BRCA mutation.

Other studies suggest that intraperitoneal delivery may be the optimal way to administer chemotherapy in patients with low BRCA1 expression. In a recent study, a 36-month advantage in OS was achieved with intraperitoneal over intravenous treatment in patients with low BRCA expression (84.1 vs 47.7 months; P =.0002). 19 Data suggest that about 48% of optimally debulked patients have low BRCA1 expression.

Dr. Armstrong suggested that by giving a PARP inhibitor in this way to patients with low BRCA expression, “we can push the envelope.” A trial of intraperitoneal therapy with and without a PARP inhibitor, stratified by BRCA1 dysfunction, has been proposed.