Many patients being treated for cancer have significant distress and often do not receive the attention they require. The psychosocial concerns of these patients are now better recognized and treated through psycho-oncology, which has become a multidisciplinary subspecialty of oncology concerned with the emotional responses of patients at all stages of disease, their families, and staff. In her presentation at the NCCN 18th Annual Conference, Dr. Jimmie C. Holland briefly reviewed the early role played by the NCCN as well as other national and international organizations in improving the psychosocial care of patients with cancer.

“Along with all the advances in the science of care, we surely have lagged behind with the issue of distress in cancer,” announced Jimmie Holland, MD, Wayne E. Chapman Chair in Psychiatric Oncology at Memorial Sloan-Kettering Cancer Center, New York, New York, and Chair of the Distress Management Panel of NCCN in her presentation at the NCCN 18th Annual Conference. After exploring the emergence of psycho-oncology as a subspecialty, Dr. Holland reviewed the early role played by NCCN in improving psychosocial care in cancer by writing standard clinical practice guidelines that have been the basis for later national and international steps forward.

Cancer Comes Out of the Closet

During the first half of the 20th century, cancer was thought to be synonymous with death, acknowledged Dr. Holland. The cancer diagnosis was traditionally not revealed to the patient. In addition to the stigma of cancer, anything psychological (including the distress related to a medical illness) has also been stigmatized.

“The 1970s were the tipping point,” Dr. Holland noted. “We began to see people with cancer being cured.” The earlier attitudinal barriers were being replaced with a growing optimism about curative treatments. Coupled with women’s and patients’ rights movements, more cancer survivors revealed their stories, such as Happy Rockefeller and Betty Ford. Patients’ psychological responses could begin to be explored.

During the last quarter of the 20th century, psychooncology was born. It was defined as a multidisciplinary subspecialty of oncology concerned with the emotional responses of patients at all stages of disease, their families, and staff. This field also studies the psychological, social, and behavioral variables that contribute to cancer risk and survival. However, an early research issue centered on the fact that patient self-reports were not accepted as a valid measure of subjective symptoms. “Only the doctor’s observation was thought useful at all in research; patient self-report was considered totally invalid,” explained Dr. Holland.

To begin to measure subjective symptoms, validated, quantitative tools were developed in the 1970s and 1980s. Scales focused on items such as health-related quality of life, pain, fatigue, anxiety, depression, and delirium. In clinical trials, these tools produced outcome data that showed the effects of an intervention on a specific symptom, and hence began to provide an evidence base for management of patients’ common symptoms.

Psychosocial problems often do not receive the attention they deserve, although according to Zabora et al,1 35% of a cohort of nearly 4,500 patients with cancer had significant distress. This analysis, which was conducted more than 10 years ago, showed the need to identify high-risk patients through psychosocial screening to provide early intervention.1

In 1997, NCCN took a proactive step, appointing a multidisciplinary panel from each member institution in its network to evaluate and improve psychosocial care in cancer. Represented on this panel were oncologists, nurses, social workers, psychologists, psychiatrists, clergy, and patients. It was agreed that a more acceptable term than “psychiatric, psychological, or emotional” was needed to reduce the mental issue stigma; the word “distress” was chosen. The distress continuum ranges from normal distress (fears, worries, and sadness) to severe distress, which might represent depression, anxiety, or family and spiritual crisis (Figure 1).

Dr. Holland briefly explored the myriad causes of distress in cancer: physical symptoms (pain, fatigue); psychological symptoms (fears, sadness); psychiatric complications (depression, anxiety, and delirium); social concerns (for family members and their future); spiritual concerns; and existential issues (exploring the meaning of life and death). From the discussion of these items by panel members, the NCCN Clinical Practice Guidelines in Oncology (NCCN Guidelines) for distress management were created. Updated annually, these guidelines are evidence-based when possible or otherwise represent a consensus of expert opinions. The panel recommended a standard of care that distress must be recognized, monitored, documented, and treated promptly during the initial patient visit and as clinically appropriate. Screening should identify the level and nature of the distress, and it should be managed according to these guidelines.

Included in the NCCN Guidelines for distress management are recommended screening tools for measuring distress. The Distress Thermometer is a 0 to 10 screening tool accompanied by a problem list. The problem list asks patients about practical problems that cause distress (eg, child care, housing, transportation, insurance), family problems (eg, dealing with children or partner), emotional problems (eg, depression, fears, nervousness, sadness, worry, loss of interest in usual activities), spiritual or religious concerns, and physical problems (eg, breathing problems, constipation, fatigue, fever). Patients can complete the form while in a busy waiting room, and those who have a score of 4 or more (moderate or severe distress) should be evaluated further by a nurse or physician. “This has been validated in 15 different countries in different languages. It is a brief broad brush stroke that is a good start,” added Dr. Holland.

According to the NCCN Guidelines, any patient with clinical evidence of moderate to severe distress should be assessed by a primary oncology team (including an oncologist, nurse, and social worker). Unrelieved physical symptoms should be treated according to disease-specific or supportive care guidelines. Clinical evidence of mild distress should signal the need for the primary oncology team to share relevant patient resources. Where indicated, referrals should be made to mental health services, social work and counseling services, or pastoral services.

In 2006, the IOM received a grant from the NIH to appoint a multidisciplinary committee to study the barriers to psychosocial care for patients with cancer and their families in community settings, stated Dr. Holland. A strong evidence base for the benefits of psychosocial interventions, including psychotherapy/counseling, psychopharmacologic agents, and behavioral changes (eg, quitting smoking), was found. The burden of the caregiver was also highlighted. “We discharge patients sicker and quicker,” she said, “and we expect a great deal of families—more than we ever did before.”

In 2008, the landmark IOM report, “Cancer Care for the Whole Patient,” was published.2,3 According to the new standard, the psychosocial domain must be integrated into routine cancer care. Figure 2 shows the model for psychosocial services adapted from this report.

Over the years, many national and international organizations have joined NCCN and IOM in endorsing the role of psychosocial care. First, similar to the NCCN Guidelines, the American College of Surgeons Commission on Cancer is developing a new standard of accreditation for 1500 cancer centers. The standard requires that the psychosocial domain be a component of routine care by 2015. Dr. Holland called this “a big move forward.” In addition, the American Psychosocial Oncology Society, the Association of Oncology Social Workers, and the Oncology Nursing Society have a joint paper with guidelines in preparation to help cancer centers implement these new requirements.

Furthermore, the International Psycho-oncology Society (IPOS) established an international quality standard to integrate the psychosocial domain into routine care. As of August 2012, the IPOS quality standard had been endorsed by 57 organizations, said Dr. Holland. Also, the IPOS standard stated that distress should be monitored routinely now as the sixth vital sign, after pain, which has been endorsed by the Canada Council.4

“We have developed a science of care, which was essential to get ourselves a place at the table with the oncologists to become a subspecialty,” declared Dr. Holland in closing. Along with science, empathy— the humanistic dimension—remains critical.

Dr. Holland has disclosed that she has no financial interests, arrangements, or commercial interest conflicts with the manufacturers of any products discussed in this article or their competitors.

A model for providing psychosocial services. Adapted from the Institute of Medicine.2 Reprinted with permission from the National Academies Press, Copyright 2008. National Academy of Sciences. 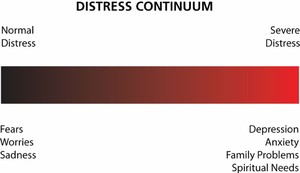 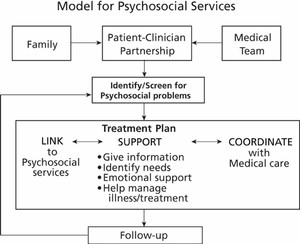