The incidence of melanoma has been steadily increasing over many decades, and melanoma patients will be “major consumers of health care for years to come,” said Chair of the NCCN Melanoma Panel Daniel G. Coit, MD, Co-Leader of the Melanoma Disease Management Team at Memorial Sloan-Kettering. Current estimates suggest that 1 in 34 men and 1 in 54 women will develop melanoma.1 However, because primary melanoma is usually easily recognizable and is often detected at an early, curable stage, melanoma is associated with a relatively low mortality rate, he said. Nevertheless, Dr. Coit added, enormous health care resources are expended in the diagnosis, staging, and monitoring of these patients, often based on insufficient evidence that these actions affect outcomes.

For the initial diagnosis of melanoma, an excisional biopsy with 1- to 3-mm margins is preferred, but shave biopsy is acceptable, especially when the index of suspicion of malignancy is low. However, as shave biopsies are technically easier to perform than excisional biopsies, and as there is little evidence that there are major adverse sequelae attributable to initial biopsy technique, shave biopsies are preferable to no biopsy for any suspicious lesion, Dr. Coit pointed out. A dermatopathologist should read all biopsy specimens and should report Breslow thickness, histologic ulceration, dermal mitotic rate per mm2, Clark level in selected cases, peripheral and deep margin status of the biopsy, and presence or absence of microsatellitosis (an indicator of stage III disease). Pure desmoplasia, if present, is important, as pure desmoplastic melanomas rarely metastasize to regional nodes, and sentinel lymph node biopsy may not be necessary. A number of other factors are optional for reporting.

The NCCN Guidelines Panel for Melanoma has sought to come up with reasonable non-evidence-based, consensus recommendations for initial workup after the diagnosis has been established. According to the panel, aggressive workup of patients with no lymph node involvement represents a common overuse of health care resources. Routine imaging and laboratory tests are not required for any patient with clinically and pathologically negative nodes (stage I-II). Complete history and physical examination are the only requirements.

The recommended optimal margins of wide excision are based on results of several well-conducted prospective randomized clinical trials, all of which have shown no improvement in either local recurrence or overall survival with wider surgical margins. The safety of limiting margins to 1 cm in patients with melanomas over 2 mm thick is the focus of a large international clinical trial currently in development.

SLNB clearly provides important prognostic information and results in improved disease-free but not disease-specific survival in patients with melanoma 1.2 to 3.5 mm thick. Final analysis of data from the MSLT-1 trial, which randomized patients with intermediate-thickness lesions to undergo SLNB or not, is anticipated within the year and will be informative regarding the role of SLNB in the initial management of these patients. For the patient with clinically node-negative disease, primary tumor ulceration and mitotic rate are very important factors—after thickness—in predicting outcome. This is particularly true for thin melanomas, where the primary tumor ulceration and mitotic rate is more important than thickness in predicting overall survival.2

For staging, very thin melanomas are upstaged from IA to IB when their mitotic rate is 1 per mm2 or greater. This upstaging is a result of the association of the presence of mitoses on prognosis. However, according to more than a dozen studies, melanomas 0.75 mm or thinner have only a 2.6% probability of resulting in a positive SLN, independent of mitotic rate.

“These are numbers that may be below our threshold for subjecting patients to a surgical staging procedure,” Dr. Coit maintained. “The challenge is where to draw the line for doing SLNB,” Dr. Coit said. “The Panel tried to set a threshold for the practitioner, and we have said that, in general, patients with very thin melanomas (0.75 mm or thinner) do not require SLNB. That is a significant change in the guidelines.” He noted that nearly three-quarters of primary melanomas seen at Memorial Sloan-Kettering are less than 1 mm, “so this change in the guidelines has the potential to affect many patients.”

The panel has attempted to formulate reasonable, non-evidence-based, consensus guidelines for the follow-up of patients rendered free of disease after initial treatment of their melanoma. General recommendations for all patients include dermatologic surveillance at intervals appropriate to risk of additional primary cutaneous malignancy and self-examination of skin and regional lymphatics. Screening blood work is acknowledged as an ineffective tool to screen for clinically occult metastases and is not recommended. For patients with pathologic stage I to IIA disease, routine cross-sectional imaging is not recommended, except to investigate specific signs and symptoms. For patients with pathologic stage IIC or IV disease, periodic screening cross-sectional imaging, again driven by risk of recurrence, is believed to be appropriate.

The conventional management of melanoma has been “stage-driven” Dr. Coit noted, but it is becoming more “risk-driven.” Several tools are available online that incorporate multivariable risk modeling to assess prognosis, including the melanoma outcome calculators available at cancer.lifemath.net, www.melanomaprognosis.org, and www.melanomacalculator.com. Risk modeling can classify patients into uniform risk categories (estimating likelihood of regional spread or systemic relapse), drive decisions about treatment and follow-up, and be a valuable supplement to the AJCC staging system. Considerations to incorporate in risk-driven management are evolving.

Updates in the Treatment of Advanced Melanoma

Anthony J. Olszanski, MD, Co-Director of the Cutaneous Malignancy Program at Fox Chase Cancer Center, also presented and discussed new drugs that have unequivocally improved outcomes in the metastatic disease setting — an achievement never before realized despite decades of intense research. In spite of these improvements though, he noted that overall survival remains guarded in many patients with stage III disease and poor in stage IV disease. Although 20-year survival approaches 90% for patients with stage I melanoma, it remains about 50% for those with stage II, 40% for those with stage III, and 10% for those with stage IV disease.3 In a meta-analysis of 42 previous phase II trials, metastatic disease carried a median survival of 6.2 months and a 1-year overall survival rate of 25.5%.4 These benchmarks serve as a reference point to compare more recent accomplishments.

Predictors of recurrence after surgical excision include nodal involvement, thickness, ulceration, and mitotic rate (any versus none). For patients considered at high risk for recurrence after adjuvant therapy, interferon-alfa appears to confer a small benefit. The value of high-dose interferon was first established in 1996 by Kirkwood et al.5 for patients with T4 lesions or evidence of regional metastasis ((N-1 positive disease). A number of other studies confirmed that interferon improved relapse-free survival, but a clear benefit in overall survival has been more elusive, as suggested by a pooled analysis.6

For some patients with metastases, systemic chemotherapy (dacarbazine, temozolomide, or carboplatin/paclitaxel) or biochemotherapy continues to play an important role, and high-dose interleukin-2 occasionally yields durable responses, especially after a complete response.9 However, interest has turned to new drug classes, including anti-CTLA4 antibodies and inhibitors of BRAF, which exploit the propensity of immune recognition and inhibition of signal-transduced growth/proliferation, respectively. The BRAF “driver” mutation is present in approximately half of patients with advanced melanoma.

Ipilimumab, which modulates the T-cell response, is the first treatment ever discovered to impart a survival advantage in stage IV melanoma. In the first-line setting, for example, ipilimumab plus dacarbazine led to a median overall survival of 11.2 months versus 9.1 months for dacarbazine alone (P = .0009). Importantly, many patients treated with ipilimumab had a durable response, as evidenced by a 1-year survival of 47.3% versus 36.3% for dacarbazine.10 “I have a patient still in a complete response at week 108, which is amazing and would not have happened 2 years ago,” Dr. Olszanski commented. Ipilimumab is indicated in patients with metastatic melanoma regardless of line of therapy.

Within only 6 months, the second drug ever to show a survival advantage in patients with metastatic melanoma was approved by the FDA. The BRAF inhibitor vemurafenib produced a survival benefit over dacarbazine in the BRIM-3 trial, in which median overall survival was 13.6 versus 9.7 months, respectively (P <.001).11,12 Up to 50% of patients with the BRAF mutation show a response to this drug; however, the typical duration of response is approximately 6 months, due to the emergence of resistance mechanisms. Vemurafenib is FDA approved for patients with a known BRAF mutation.

Drugs Are Not Without Side Effects

The improved efficacy of treatment of stage IV melanoma with novel agents comes at the potential expense of toxicity, Dr. Olszanski added. With ipilimumab, about one-third of patients develop pruritus or increased hepatic enzymes, and even more experience diarrhea or colitis, which can be severe. For the 4% of patients who develop grade 3 to 4 diarrhea or other immune-related side effects, high-dose steroids are indicated. “Immune-related adverse events require the education of patients and health care providers,” he emphasized. Health care providers using ipilimumab should be intimately familiar with the risk evaluation and mitigation strategy (REMS) program mandated by the FDA.

With BRAF inhibitors, arthralgias, rash, fatigue, and photosensitivity are the main concerns, occurring in about one-third of patients. Cutaneous squamous cell carcinomas and keratoacanthomas occur in a small percentage of patients; hence patients treated with these agents will benefit from continued dermatologic surveillance and referral to a dermatologist. Given that patients with metastatic melanoma are acutely aware of new skin lesions, rapid evaluation and treatment of these relatively benign lesions is critical and may help alleviate anxiety.

One potential mechanism of resistance to BRAF inhibitors is thought to be the upregulation of MEK, which exists downstream of BRAF. Early indicators suggest that combining inhibitors of both of these pathways yields an improved response rate to approximately 75%, and responses are more durable in patients with a BRAF mutation. In a phase 2 study, median progression-free survival was 9.4 months with the combination of dabrafenib (BRAF inhibitor) and trametinib (MEK inhibitor), versus 5.8 months for dabrafenib monotherapy (P <.001).13 The combination is also associated with less skin toxicity, although pyrexia is an emerging and sometimes concerning side effect. Phase 3 trials are underway.

Another immunomodulatory class now in trials involves PD-1 and PD-L1 antibodies. These inhibitors may engender higher response rates, improved tolerability and more specificity than CTLA-4 inhibitors. Early trials have shown overall response rates of almost 30% and 6-month progression-free survival rates of more than 40%.14 Ongoing studies will further elucidate the potential benefits of these agents in melanoma.

“Overall survival for patients with melanoma is improving and will only get better in 2014,” Dr. Olszanski concluded. He emphasized, “enrollment into clinical trials is paramount for the continued improvements and is the only way to answer our questions.” 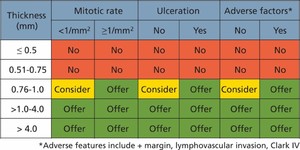