All clinicians completing this activity will be issued a certificate of participation. To participate in this journal CE activity: 1) review the learning objectives and author disclosures; 2) study the education content; 3) take the posttest with a 66% minimum passing score and complete the evaluation at http://education.nccn.org/node/35435; and 4) view/print certificate.

An estimated 72,570 people (54,610 men and 17,960 women) will be diagnosed with cancer of the urinary bladder and 15,210 will die of the disease in the United States in 2013.1 Localized bladder cancers constitute approximately 35% of all bladder cancer cases and have an overall 5-year relative survival of 70%.1 Urothelial (transitional cell) carcinomas are the most common histologic subtype in the United States. Cisplatin-based neoadjuvant chemotherapy has been shown to improve survival in patients with localized muscle-invasive bladder cancer.2-5 In the metastatic setting, gemcitabine/cisplatin (GC) showed similar efficacy to MVAC (methotrexate/vinblastine/doxorubicin/cisplatin) in terms of objective response rate, progression-free survival, and overall survival, and had a more favorable toxicity profile.6 Furthermore, in many studies the rate of downstaging with GC use was comparable to that of MVAC.7-9 The GC data in the metastatic setting are extrapolated to the neoadjuvant setting, because they show comparable results with a reduced toxicity profile. Approximately 38% of patients receiving neoadjuvant chemotherapy show a complete pathologic response (pT0) at cystectomy,4 and the remaining patients have either residual disease or progressive disease. This report presents a case of unusual mast cell response to neoadjuvant chemotherapy, suspicious for disease progression on imaging studies.

A 51-year-old woman presented with a 3-week history of gross hematuria and dysuria. She was initially treated with antibiotics for a possible urinary tract infection. However, hematuria persisted and a subsequent CT scan of her abdomen and pelvis (with and without contrast) showed an irregular necrotic-appearing mass at the bladder dome measuring 5 x 3 cm (Figure 1). No evidence was seen of lymphadenopathy or metastasis. Cystoscopy confirmed the presence of a mass and she underwent transurethral resection (TUR) of the bladder tumor. After resection, the tumor base was cauterized and a mitomycin cocktail was left indwelling. Hematuria subsided with TUR.

Based on pathology report, patient was started on neoadjuvant chemotherapy with a GC-based regimen for an intended 3 cycles before the planned cystectomy. The dose of gemcitabine was reduced by 20% on day 8 of cycle 1 because of thrombocytopenia. At the end of the second cycle of chemotherapy, the patient again developed significant hematuria, dysuria, and increased urinary frequency. An ultrasonogram of the bladder showed diffuse thickening of the bladder wall in addition to the tumor (Figure 2). She was deemed to have progressive disease based on worsening symptoms and bladder wall thickening on ultrasound, with suspected intramural spread. Repeat CT scan of the abdomen and pelvis with contrast showed a decrease in tumor size to 3 x 1 cm along with bladder wall thickening (Figure 3). This was highly suspicious of disease progression. Therefore, chemotherapy was discontinued and she underwent a robot-assisted radical cystectomy with open construction of an ileal neobladder and an extended bilateral pelvic lymph node dissection.

This patient was started on neoadjuvant chemotherapy with GC and developed the symptoms of dysuria, urgency, and frequency. In the context of a thickened bladder wall, this development was concerning for disease progression, and the surgery was appropriately preponed. To the authors’ surprise, final pathology results of the cystectomy specimen did not reveal any residual tumor. Chronic inflammation with fibrosis and focal granulomatous inflammation were noted (common reactions to chemotherapy). However, diffuse mast cell infiltration of the bladder wall is unusual.

Diffuse mast cell infiltration of the detrusor muscle along with perineural mast cell accumulation (Figure 7) could explain the aggravation of this patient’s pain after she received 2 cycles of chemotherapy. Furthermore, the patient had exposure to intravesical mitomycin 1 month before the start of neoadjuvant chemotherapy. It is well-known that intravesical mitomycin can cause chemical cystitis, and case reports have been published of eosinophilic cystitis after mitomycin-C intravesical instillation.16 However, most of these cases occurred as a delayed hypersensitivity reaction after multiple intravesical treatments for superficial bladder tumors, and none of them had diffuse mast cell infiltration. This supports the idea that chemotherapy could be one of the factors causing activation and degranulation of mast cells, resulting in a clinical picture similar to interstitial cystitis.

This type of overwhelming inflammatory response may be a biomarker of complete response to chemotherapy. This phenomenon may be studied and thus developed as a strategy to avoid cystectomy. Moreover, this case also underscores the fact that radiographic appearance does not always correlate with the histopathologic changes in the tumor as a response to systemic chemotherapy.

Dr. George has disclosed that he has received research funding from GlaxoSmithKline plc, and is a consultant and advisory board member for AVEO Pharmaceuticals, Inc., sanofi-aventis U.S. LLC, Bayer HealthCare/Algeta, and Novartis. The remaining authors have disclosed that they have no financial interests, arrangements, affiliations, or commercial interests with the manufacturers of any products discussed in this article or their competitors. 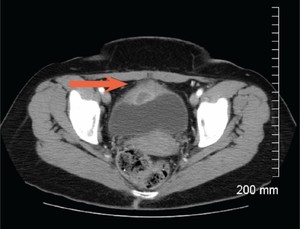 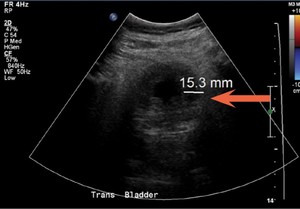 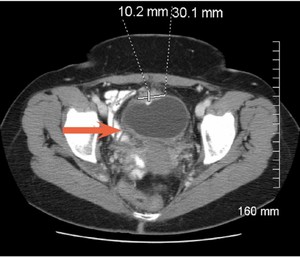 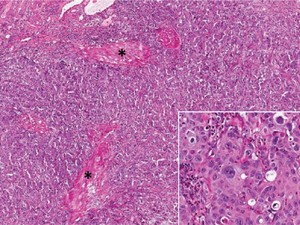 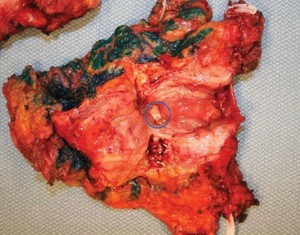 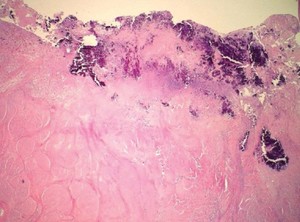 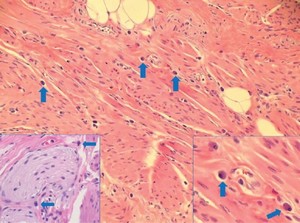 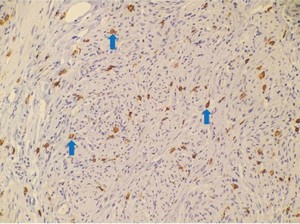