Surgery is the treatment option most likely to be associated with prolonged remission in patients with malignant pleural mesothelioma. However, it remains investigational and must always be combined with other modalities to treat the microscopic disease that remains after the most aggressive operations. Improvements in quality of life for appropriate patients with this rare yet incurable cancer may be obtained with less drastic lung-sparing surgical procedures along with intraoperative use of photodynamic therapy (PDT). Very encouraging survival results have been obtained with the combination of surgery and PDT, which requires the well-orchestrated collaborative effort of an extensive team of professionals, from thoracic surgeons and radiation oncologists to basic science researchers. Multi-institutional trials are necessary to duplicate these early findings and shed more light on the tumor-directed immune response of this surgically based multimodal treatment.

Performing surgery for malignant pleural mesothelioma “is like scraping paint off a wall: there is always going to be microscopic disease left,” declared Joseph S. Friedberg, MD, Chief of Thoracic Surgery at Penn Presbyterian Medical Center, University of Pennsylvania Health System, Philadelphia, Pennsylvania.“The reason that this colossal operation to remove the pleura from mesothelioma does not cure people is that you cannot get a negative margin here,” he explained. Therefore, surgery remains investigational for patients with this incurable cancer and must be coupled with another modality, such as chemotherapy, radiation therapy, or perhaps intraoperative use of photodynamic therapy (PDT), to treat the residual microscopic disease.

Almost exclusively caused by exposure to asbestos or occasionally a delayed response to radiation, malignant pleural mesothelioma is associated with a poor median survival of 9 to 10 months.1,2 Chemotherapy is arguably the standard of care, although it yields only a 40% response rate and a several-month extension in median survival.1 The modality most likely to be associated with prolonged remission is surgery, although it remains investigational.1

From the perspective of a thoracic surgeon with experience in performing surgery-based treatment for malignant pleural mesothelioma (Figure 1), this article first briefly explores the move from lung-sacrificing to lung-sparing surgery. Then, the University of Pennsylvania experience with lung-sparing surgery plus PDT is explored, showing preservation of quality of life when compared with lung-sacrificing surgery, and promising survival results. Finally, several avenues of PDT-inspired translational research are highlighted by Dr. Friedberg, including the fungicidal effects of PDT in the treatment of pulmonary aspergilloma; preclinical studies using mineral oil to enhance the delivery of light with PDT to illuminate an entire organ; and the use of rare earth nanophosphors for simultaneous radiotherapy and PDT for tumors of the chest cavity, brain, or spinal cord.

The goal of surgery-based treatments for malignant pleural mesothelioma is to achieve a macroscopic complete resection, with no visible or palpable disease remaining, according to Dr. Friedberg. “Something else” is needed for residual microscopic disease, he added. Chemotherapy could be used before surgery, and after surgery, chemotherapy and/or radiotherapy are options. However, “to do effective hemithoracic radiation, you have to take the lung out so you don’t end up with terminal radiation pneumonitis,” explained Dr. Friedberg. Two intraoperative alternatives are heated chemotherapy (with cisplatin) and PDT.

The surgical plan involves standard informed consent and preoperative patient evaluation. “Patients are told that surgery for mesothelioma remains investigational and is not a standard of care,” stated Dr. Friedberg. Patients must be medically cleared for such an extensive surgical procedure. The remaining steps include administration of the photosensitizer (porfimer sodium [Photofrin]), surgery to achieve macroscopic complete resection, intraoperative PDT, and adjuvant pemetrexed (Alimta)-based chemotherapy (if not given preoperatively).

The classic extrapleural pneumonectomy involved removal of the lung and much reconstruction, mentioned Dr. Friedberg. A modified extra-pleural pneumonectomy attempts to preserve the barriers of the peritoneum, pericardium, abdomen, and phrenic nerves to the diaphragm. Dr. Friedberg’s team now exclusively performs lung-sparing macroscopic complete resection. “We don’t ever take the lung anymore,” he revealed. Intraoperative views of the steps needed to separate the tumor from the lung are shown in Figure 2. The tumor may come out as a single specimen piece or piecemeal. Dr. Friedberg believes that the lung can be spared in every case, and his team is working diligently to make this a transferable, albeit complex, procedure that other surgeons will be able to perform.

The University of Pennsylvania Experience With Pleural PDT

Dr. Friedberg shared his recently published results with surgery and PDT for malignant pleural mesothelioma at the University of Pennsylvania.3,4 From 2004 to 2008, 28 patients with malignant pleural mesothelioma underwent macroscopic complete resection: 14 by modified extrapleural pneumonectomy (MEPP) and 14 by radical pleurectomy (RP) and intraoperative PDT.3 Over this period, the surgical technique evolved, so that 13 of the last 16 patients underwent lung-sparing procedures, even in the setting of bulky tumors.3 A total of 86% of these patients had stage III/IV disease.3

Based on the published data in 2011, the median overall survival for the MEPP group was 8.4 months, and it had not yet been reached for the RP group with PDT at 2-year follow-up. The disease-free survival was essentially the same for those with and those without lung-sparing surgeries, Dr. Friedberg stated. Although this was a small, retrospective study, Dr. Friedberg admitted that the overall survival rates were “beyond anything that had been previously reported; obviously not conclusive given the limitations of the study, but intriguing nonetheless.”

Quality of life is a major consideration in patients with malignant pleural mesothelioma, because the cancer will recur and surgery is palliative, according to Dr. Friedberg. “There is arguably no bigger quality-of-life difference than between having a lung and not having a lung,” he emphasized.

In 2 different groups of patients, unusually long survival was achieved with surgery and PDT in both malignant pleural mesothelioma4 and non–small cell lung cancer (NSCLC) with pleural tumor spread.5 In the first study,4 38 patients with malignant pleural mesothelioma underwent radical pleurectomy and intraoperative PDT. A total of 35 had also received systemic therapy, and 37 had stage III/IV cancer.4 Of the patients with stage III/IV cancer, 97% experienced a macroscopic complete resection with the lung-sparing surgery.4 The median overall survival for patients with epithelial subtypes of cancer was nearly 3 years, which was much longer than the 6.8 months noted in those with nonepithelial subtypes of cancer.4 These overall survival results did not translate to improved progression-free survival results.4 Dr. Friedberg and colleagues proposed that the reason for this prolonged survival despite tumor recurrence may be related to preservation of the lung, some PDT-induced effect, or both.4

Dr. Friedberg and colleagues conducted a phase II trial of pleural PDT and surgery for NSCLC with pleural tumor spread.5 Of the 22 patients enrolled in this study (which was performed before the targeted therapy era), 17 underwent complete debulking and PDT, 3 underwent partial debulking and PDT, and 2 were considered to have unresectable disease.5 Eighty percent of the patients had T4,N2 disease. At 6 months after treatment, local control of pleural disease was achieved in 11 of 15 assessable patients.5 The median overall survival for all 22 patients was 21.7 months.5

Finally, Dr. Friedberg briefly discussed the use of gene therapy and PDT to activate an immune response at his institution. This minimally invasive procedure uses a video saphenous vein dissector. Through a 1-cm incision, the tunneling device is introduced into a fused chest, he explained. A confirmatory biopsy is performed and a catheter placed. “We have done almost 3 dozen of these now,” announced Dr. Friedberg. Based on a particularly robust response (essentially a complete response) to gene therapy in one patient, Dr. Friedberg considers this a “very fertile area for collaboration and investigation.”

Turning toward a glimpse at future potential applications of PDT, Dr. Friedberg painted a few “what if?” scenarios in the realm of PDT-inspired translational research. He focused particular attention on treating pulmonary aspergilloma with PDT, delivering light to an entire organ (such as the liver or pancreas), using infrared instead of visible light to extend the treatable range of PDT, and performing simultaneous radiotherapy and PDT radioisotopically.

The in vitro effects of PDT on Aspergillus fumigatus were explored by Dr. Friedberg et al.6 Using the photosensitizer Green 2W, they showed significant fungicidal, not fungistatic, activity against this common fungus.6 These effects were dependent on the inoculum and the light dose. Under these conditions, complete killing of more than 105 colony-forming units per milliliter/mL occurred. 6 Dr. Friedberg envisioned the possibility of accessing aspergilloma with an interventional radiology catheter, aspirating the fungus ball, instilling a sensitizer and light source, and sterilizing the cavity. Treating fungal sinusitis with PDT also represents an area for further study.

Light delivery constraints currently limit the application of PDT to superficial tumors. Dr. Friedberg and his colleagues wanted to know whether it would be possible to manipulate the optical properties of irregularly shaped anatomic structures for the purpose of enhancing the delivery of light, thereby expanding the role of PDT. Through preclinical research,7 they found that it certainly was possible to “bend the light” in biologic structures to conduct light.

To enhance tracheal illumination in their animal models, they learned that mineral oil offered a higher refractive index than did either air or saline, yielding a 4-log difference in light delivery. Much to his delight, Dr. Friedberg found that when you filled the trachea with mineral oil, “the light did what a fiber optic cable should do: the light went all the way around. So, you can really deliver light around a corner through an anatomic structure. In this way, you might be able to light up an entire colon,” he hypothesized. The same approach enabled near-uniform illumination of the lung (Figure 3). “Mineral oil was the best way to illuminate the lung; the whole lung lit up like a light bulb,” revealed Dr. Friedberg.

To explore this proof-of-principle experiment further, they attempted to improve light delivery to extend the treatable range, such as in a more complex, branched structure like the bronchial tree. Again, they were pleased to discover that using infrared rather than visible light made it possible to increase the refractive index within the bronchial tree in a sheep trachea.

Dr. Friedberg proposed possible clinical applications for this type of “light piping.” In addition to illuminating the entire colon for treating familial polyposis or another multiple-lesion condition, lighting the entire spinal canal might permit the treatment of spinal carcinomatosis, he suggested. Other interesting scenarios may be to light up “every nook and cranny” in the abdomen or the chest or to treat an entire lung, liver, pancreas, or kidney through fiberoptically accessing the “ductal” network of these organs.

Finally, PDT may be used simultaneously with radiotherapy radioisotopically to treat tumors. Based on their preclinical research, Dr. Friedberg and colleagues realized that through externally delivering invisible infrared laser light, they could stimulate the production of visible green light. “We injected the rare earth nanophosphors into the tumor and then used infrared light into the tumor; then these phosphors upconverted the infrared light, which was used as the activating action for PDT to kill the tumors,” he reported. Dr. Friedberg brainstormed a few potential uses of this PDT approach using these nanophosphors: to treat a tumor in the middle of the brain or breast with an infrared light or to generate antigen for immunotherapy deep in the body.

Although still considered investigational, the use of lung-sparing surgery with intraoperative PDT to treat malignant pleural mesothelioma may offer quality of life and survival outcomes over treatment options for this incurable disease. An essential component of this aggressive approach is the collaboration of an experienced team of health care professionals. A multi-institutional trial with and without PDT for malignant pleural mesothelioma is warranted and necessary to confirm the promising results obtained in small numbers of patients with mesothelioma. Moreover, further studies on the tumor-directed response of this surgically based multimodal treatment and other avenues for PDT-inspired research may clarify the role of PDT and its clinical applications in the future.

Intraoperative views of lung-sparing surgery showing the steps to separate the tumor from the lung. 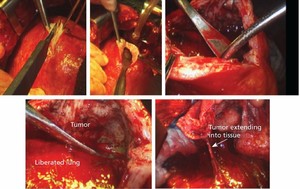