Where Does Photodynamic Therapy Fit in the Esophageal Cancer Treatment Jigsaw Puzzle?

Traditional treatment options for esophageal cancer have centered on the triad of surgery, chemotherapy, and radiotherapy. Although surgery remains the gold standard for operable disease, photodynamic therapy (PDT) is emerging as a valid minimally invasive option for select patients with inoperable disease. Years of experience with PDT for esophageal cancer seem to suggest that it may be particularly useful for treatment of early unresectable lesions, palliation of locally advanced disease, and salvage therapy for stent blockage or local tumor recurrence. Further investigation into the ideal role for PDT, perhaps through a comparative study with other nonsurgical options, may help clarify where it fits in the treatment armamentarium for esophageal cancer.

Although surgery still holds “the highest place” in treatment of operable esophageal cancer, photodynamic therapy (PDT) represents an effective, minimally invasive treatment option in selected patients, declared Keyvan Moghissi, BSc, MD, MS, FRCS, FETCS, Director and Consultant, Cardiothoracic Surgeon, at Yorkshire Laser Centre in East Yorkshire, England. With many years of experience with PDT for esophageal lesions, Dr. Moghissi believes that the emerging indications for PDT include in early esophageal cancer for those who are ineligible for surgical resection, for locally advanced malignant tumors with exophytic obstructive lesions and no distant metastases, and as salvage when other treatment options have failed.

The standard treatment of esophageal cancer centers on the triad of surgery, chemotherapy, and radiotherapy. Other therapeutic alternatives have included endoscopic mucosal resection, chemoradiotherapy, radiofrequency ablation, cryotherapy, thermal laser therapy, and PDT. However, Dr. Moghissi admits, “no one has done what would be satisfactory: randomized trials to compare these options.” This article reviews outcomes obtained with PDT for esophageal cancer and explores the treatment settings in which it may be most effective.

Dr. Moghissi briefly reviewed his experience managing premalignant and malignant esophageal tumors at the Yorkshire Laser Centre in England.1,2 “I am one who believes that high-grade dysplasia is very difficult to distinguish from early cancer,” he began. Among the complications of Barrett esophagus and high-grade dysplasia are esophagitis/ulcer, penetrating ulcer leading to hemorrhage, stricture, and neoplasia (adenocarcinoma). “No one knows why some patients with Barrett esophagus develop cancer and some don’t,” declared Dr. Moghissi. In terms of treatment, however, he believes that young patients with operable esophageal cancer should undergo surgery rather than any endoscopic treatment.

In terms of survival, in the RR group, nearly 80% of patients with stage I disease were alive at 5 years, compared with approximately 20% of patients with stages II and III disease (Figure 1).2 “If you perform esophagectomy for early cancer (stage I), patients can eat and don’t have a lot of symptoms (after 6 months), and then essentially after a year or two, they have a totally normal life,” revealed Dr. Moghissi. Among the group of patients who did not have RR, 367 had intubation/stenting; 75 had surgical bypass; 58 endoscopy and treatment using a YAG (yttrium-aluminum-garnet) laser; 37, chemoradiotherapy; and 28, brachytherapy.1 The 30-day mortality rate for chemoradiotherapy was 35%; surgical bypass, 22%; intubation/stenting, 20%; brachytherapy, 10%; endoscopy with a YAG laser, 8%; and PDT, 0%.1

Indications for PDT in Esophageal Cancer

Before sharing his results on PDT for early-stage cancer, locally advanced tumors, and as a salvage option, Dr. Moghissi briefly reviewed his PDT protocol. The first step is a pre-PDT esophagoscopic assessment. Regardless of where the patient has come from and who has performed the initial assessment, “I still do the pre-PDT esophagoscopic assessment myself,” he declared. Next, photosensitization with porfimer sodium (Photofrin) is performed, followed by patient counseling. Nowadays, he reports, fewer problems are seen with photosensitivity because of the emphasis on counseling. A latent period of between 24 and 72 hours follows, which is again followed by patient counseling. Illumination (intraluminal or interstitial) at 630 nm occurs after that. Finally, the results are assessed and monitored.

As with most treatments for early-stage cancer, the use of PDT in early-stage esophageal cancer offers long survival and the prospect of cure in some patients.3 According to Dr. Moghissi, the following patients may be candidates for PDT: those with oncologically operable cancer for whom surgery is clinically unsuitable, those with a high operative risk (perhaps because of comorbidity), and those who do not consent to surgery. Figure 2 illustrates a successful outcome with endoscopic PDT for a patient with early-stage esophageal cancer.

For locally advanced esophageal cancer, the primary objective of PDT is palliation of symptoms (severe [grades III–IV] dysphagia).3 Patients with dysphagia who are eligible for PDT are those with a good performance status (≤ 3 according to WHO status) and those without carcinomatosis. Another indication for PDT is locally advanced exophytic endoluminal cancer. In this case, “I would use a thermal laser to reduce and debulk the tumor first and then use PDT; it reduces the number of sessions of PDT and also facilitates illumination,” reported Dr. Moghissi.

In Dr. Moghissi’s experience with PDT in 89 patients with locally advanced esophageal cancer, the mortality rate was 0%.3 In terms of morbidity, 12 episodes (14%) of adverse events occurred post PDT, 11 patients (12%) had chest pain for 3 to 5 days, 7 patients (8%) had stricture, and 4 patients (5%) had mild photosensitivity.3 “You don’t have a lot of strictures, and the strictures that you do have are easily dilatable and not problematic,” indicated Dr. Moghissi. The functional results of PDT in these patients are shown in Figure 3, which demonstrates the improvement in dysphagia by grade following PDT.

PDT may also be useful as a salvage alternative and for special considerations. “Salvage now constitutes one of the increasing indications [for PDT] in our country,” stated Dr. Moghissi. Indications in this setting include stent blockage from tumor growth, pharyngoesophageal tumors, locally recurrent disease after resection, and as induction chemotherapy without surgery. “There are an increasing number of patients who after chemotherapy either do not wish to have surgery or cannot have surgery,” mentioned Dr. Moghissi. Figure 4 shows the benefits of PDT for relieving dysphagia from extensive local tumor recurrence after lower esophagectomy.

Based on his experience with endoscopic PDT at the Yorkshire Laser Centre, Dr. Moghissi reported that there was no procedure-related mortality, and patient satisfaction ranked at 98%. In 10% of treated patients, esophagitis lasted for 4 to 5 days after PDT, and stricture occurred in 8%. No cases of fistula or bleeding were seen, he said.

Dr. Moghissi briefly discussed the complications associated with interventional esophagoscopy in the literature. Balázs et al5 reported a complication rate of 23.7% in the 1143 patients for whom tubes and stents were endoscopically implanted. These adverse events included stent migration, perforation, bleeding, airway obstruction, esophagorespiratory fistula formation, and reflux.5 In a study of 57 patients who received stents endoscopically for incurable esophageal obstruction, Morgan et al6 reported a complication rate of 42% (24 patients). These complications consisted of events such as tumor overgrowth (25%), stent migration (14%), tracheoesophageal fistula (4%), and perforation (2%).5 Despite these complications, both groups concluded that endoscopic stenting for advanced esophageal obstruction is an effective way to relieve dysphagia in most patients and improve their quality of life.5,6

Dr. Moghissi and colleagues attempted to compare endoscopic PDT with surgery in a small group of patients with esophageal cancer. This retrospective analysis matched patients between the 2 groups in a nonrandomized manner. Forty consecutive patients were treated with PDT,7 and 40 selected patients were treated with RR. The patients were fairly balanced by age, with slightly more men receiving PDT and more women receiving RR. All PDT cases were inoperable, and the mean age of PDT patients was 77 years. All RR cases were operable, and the mean age of RR patients was 65 years.

To clarify these findings, Dr. Moghissi comparatively categorized the groups. For example, the PDT group contained older patients at higher risk with high comorbidity who were staged clinically and were ineligible for surgery, whereas the RR group contained younger patients at lower risk with low comorbidity who were staged pathologically and were eligible for surgery. Furthermore, he acknowledged the strengths and weaknesses of this study. The strengths included that the PDT procedure was performed by the same team and the same institution, that no variation occurred in either the PDT technique or the surgical method, and that the population was similar demographically. The weaknesses included that the study was not a blinded, randomized trial; that there was heterogeneity of material and methods in the advanced cases; and that oncologic dissimilarity was present in the early cases.

The study findings led Dr. Moghissi to draw some conclusions about the use of PDT for esophageal cancer. First, PDT represents an effective, minimally invasive treatment option for selected patients. Second, for early-stage esophageal cancer, PDT may result in complete clearance and survival of longer than 5 years in approximately 60% of cases. Third, for advanced-stage malignant cases, PDT may provide palliative and survival benefits in some patients with a good performance status. Moreover, in patients with premalignant and early malignant esophageal lesions, Dr. Moghissi believes that the results with PDT approximate those with surgical resection, at least in the medium term, considering patients treated with PDT were 1) selected from those not suitable for surgery and 2) staged clinically while the surgical group was staged pathologically.

PDT offers a minimally invasive treatment option for selected patients with esophageal cancer, particularly those with early-stage disease who are not candidates for surgery, those with locally advanced obstructive lesions, and those for whom other treatments have failed to provide a benefit. However, concerns about the use of PDT for esophageal cancer remain. Prime among them is the lack of evidence of efficacy from randomized controlled trials. Other challenges involve lack of a suitable drug, the illumination dose, different tumor morphology, and 3-dimensional identification of the extent of the tumor. Although Dr. Moghissi admits that, realistically speaking, these blinded trials can never be performed, the need for more evidence-based guidelines from some other type of study is warranted. Finally, further investigations into the ideal role of PDT, perhaps through a comparative study with another nonsurgical option,8 may help clarify exactly where it fits in the treatment armamentarium for esophageal cancer.

Survival by stage of disease in 562 consecutive patients undergoing esophagectomy and reconstruction. 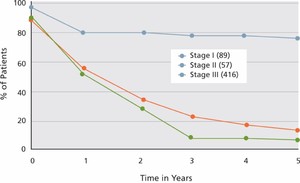 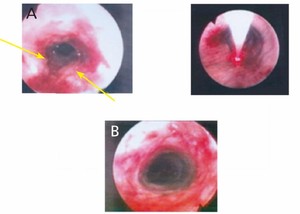 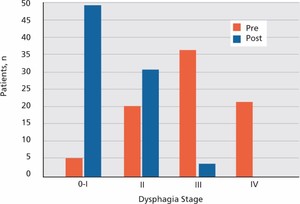 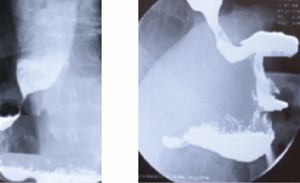