Pancreaticobiliary cancer remains a challenging cancer to treat, with a small group of patients having resectable disease and few long-term survivors. Stenting remains the treatment of choice for biliary obstruction, but optimal stenting is difficult. Resection and chemoradiotherapy are indicated for localized pancreatic cancer, and gemcitabine-based chemotherapy may be considered the standard of care for advanced/metastatic pancreatic disease. In the search for better therapeutic alternatives, the role of photodynamic therapy (PDT) for both pancreatic and biliary tract cancers has been evaluated. Although conflicting and often poor-quality data have emerged on the use of PDT for unresectable bile duct cancers and encouraging early-stage studies with PDT are under way for unresectable, locally advanced pancreatic cancer, definitive answers as to its efficacy can only be found in randomized controlled trials.

“We have had an interest in photodynamic therapy [PDT] in the biliary tract for more than 10 years,” declared Stephen Pereira, PhD, Reader in Hepatology & Gastroenterology at the UCL Institute for Liver and Digestive Health, UCL Medical School, and member of the Department of Gastroenterology at University College Hospital, London. With few cases of long-term survival after surgical resection for pancreatic cancer, novel therapeutic alternatives are sorely needed. In this article, Dr. Pereira first discusses the use of PDT for bile duct cancer, highlighting the promise of early clinical studies and sharing his negative findings from the Photostent-02 trial. With little evidence of PDT’s efficacy emerging from randomized controlled trials (RCTs), stenting and chemotherapy currently remain the standards of care for bile duct cancer. Next, he explores investigative use of PDT for pancreatic cancer, focusing on encouraging phase I results from the Vertpac-01 study.

Pancreatic cancer is often detected too late, admitted Dr. Pereira, and many patients initially present with advanced disease as a result of the vague nature of clinical signs and symptoms. Only a small subgroup of patients has resectable disease, he added, and often surgical intervention cannot be undertaken because of vascular encasement and metastatic disease. Dr. Pereira stressed the need for earlier diagnosis of pancreatic cancer.

For malignant biliary strictures, not only is tissue diagnosis difficult, so too is optimal stenting, stated Dr. Pereira. In addition, repeat stenting is often necessary, and problems with stent blockage and tumor ingrowth/overgrowth may occur. Therefore, novel therapeutic alternatives have been sought.

PDT for Bile Duct Cancer: From Promising to Negative Results

Perhaps the most promising and dramatic phase III data on PDT for bile duct cancer came from a small randomized prospective German study.2 Thirty-nine patients with nonresectable cholangiocarcinoma were treated with either PDT plus stenting or stenting alone. Ortner et al2 found that PDT plus stenting resulted in prolongation of survival versus stenting alone (493 vs. 98 days; P < 0.0001).2 They also reported an improvement in biliary drainage and quality of life with the addition of PDT to stenting.2 Dr. Pereira warned that the number of patients in this study was small and no chemotherapy was given, but he acknowledged that “there clearly was a consistent trend.”

Reporting on his own experience with meso-tetrahydroxyphenylchlorin (mTHPC)–mediated PDT in 14 patients with malignant biliary obstruction, Dr. Pereira indicated that this treatment caused efficient tumor necrosis and recanalization of all blocked metal stents.3 In addition, the median survival post PDT was 15 months. However, a significant risk of complications was noted.3

Furthermore, according to the findings of a recent comparative effectiveness systematic review and meta-analyses, palliative treatment of unresectable cholangiocarcinoma may be associated with an increased survival benefit, improved biliary drainage, and enhanced quality of life, stated Dr. Pereira. However, he admitted that the quality of this evidence is rather low.

More recently, a systematic review of PDT in the treatment of an assortment of cancers was conducted by the Centre for Reviews and Dissemination at the University of York in the United Kingdom.4 The data assessed were derived from 88 trials in 141 publications. Few well-conducted, adequately powered RCTs were found (only ∼40%), and quality-of-life and resource outcomes were underreported. In addition, problems were identified with reporting of key study features and quality parameters. Outside of skin conditions and perhaps Barrett esophagus, evidence of efficacy with PDT in relation to other treatments was lacking.

Dr. Pereira shared his phase II (Photostent-01) and III (Photostent-02) study results with porfimer sodium (Photofrin)–mediated PDT in locally advanced biliary tree carcinomas. Both trials were endorsed by the National Cancer Research Network (NCRN) and sponsored by the University College in London. In Photostent-01, 36 patients, with a mean age of 65 years, participated. At 2-year follow-up, Dr. Pereira reported a median survival of 13.9 months, compared with 7 months for historic controls. With no grade 4 toxicities experienced, they proceeded to Photostent-02.5

The schema for the Photostent-02 study is shown in Figure 1. Although the target sample size was 240 patients, the trial closed early with 92 patients with advanced or metastatic cholangiocarcinomas and other biliary tract tumors. Half of patients were treated with PDT plus stenting, and the other half received stenting alone. However, the early promise in overall survival was not confirmed. Overall survival was longer in those treated with stenting alone versus PDT plus stenting (9.2 vs. 6.1 months), but “there was no real difference in progression-free survival,” stated Dr. Pereira.

Dr. Pereira attempted to explain possible reasons for the negative results obtained in Photostent-02. First, more patients in the stenting-alone group received chemotherapy than in the PDT-plus-stenting group (46% vs 26%; P = .050). “Fewer patients receiving palliative chemotherapy in the PDT arm accounted for 34% of the survival difference,” he added. Second, patients in the stenting-alone group started chemotherapy earlier than those in the PDT-plus-stenting group (36 vs. 102 days from randomization).

Based on the findings of the Photostent-02 study, optimal stenting remains the preferred treatment for biliary obstruction, according to Dr. Pereira. With a lack of current evidence of efficacy from RCTs, use of PDT for biliary tract cancer outside of clinical trials is not recommended. Dr. Pereira admitted that because biliary tract cancer is a rare disease, adequate single-center studies are difficult to perform, and therefore multicenter studies may be feasible. In terms of chemotherapy for patients with locally advanced or metastatic biliary tract cancer, Dr. Pereira stated that cisplatin plus gemcitabine (Gemzar) has emerged as the new standard of care, showing a significant survival advantage without additional substantial toxicity compared with gemcitabine alone.6

In briefly turning to pancreatic cancer, Dr. Pereira painted a therapeutic picture that has not been bright. Approximately 50% of patients with pancreatic cancer have metastases detected during staging, and 30% to 35% have locally advanced unresectable tumors, he added. In 2012, the standard of care for localized pancreatic cancer is resection with or without chemoradiotherapy, Dr. Pereira reported, and gemcitabine-based chemotherapy is indicated for advanced/metastatic pancreatic disease. However, the median survival rates for both metastatic and nonmetastatic diseases are poor, and therefore novel approaches to treatment are being sought.

Because few pancreatic cancers are suitable for surgery and many do not respond to chemoradiotherapy, interstitial PDT has been investigated as a potential therapeutic option for patients with inoperable adenocarcinomas localized to the region of the head of the pancreas. Light is delivered directly to internal tumors using fibers passed through needles positioned percutaneously under image guidance (eg, ultrasonography, CT, MRI), explained Dr. Pereira. A predictable zone of biologic change is present around the fibers, he added, with no unacceptable effects on surrounding tissues.

Bown et al7 performed a phase I study of mTH-PC-mediated PDT in 16 patients with localized but inoperable pancreatic cancer. Major vessels were involved in 14 patients, and the median age was 66 years. The median tumor diameter was 4 cm, and all patients had jaundice relieved with biliary stenting. All patients had substantial tumor necrosis, and no treatment-related deaths occurred. However, 2 patients with tumor involving the gastroduodenal artery had significant bleeding, which was controlled without surgery. One year after PDT treatment, nearly half of the patients were still alive.

In a more recent study (Vertpac-01), verteporfin-mediated PDT was tested in a small phase I trial in unresectable locally advanced pancreatic cancer. According to preclinical studies,8 the safety profile of this photosensitizer is similar to that of mTHPC, with the advantages of a shorter drug-light interval and drug elimination time. The study was designed in 2 parts: the first 12 patients were treated with a single-fiber light, and the next 12 patients will be treated with light from multiple fibers. The protocol for imaging consisted of high-resolution contrast CT 2 days before treatment; low-resolution no-contrast CT with needle placement; and high-resolution contrast CT before and after light treatment and 5 to 7 days after treatment.

According to Dr. Pereira, the needle placement and PDT were technically successful in all of the first 12 patients, and necrosis of the localized pancreatic cancers was achieved around a single fiber on CT/MRI imaging at day 4 after PDT treatment. No early adverse events and one grade 3 adverse event at day 28 (cholangitis) were seen. In addition, no instances of photosensitivity were reported. Palliative gemcitabine was started after day 28. The continuation phase of Vertpac-01 will proceed with transcutaneous placement of multiple fibers in the pancreatic tumor using CT guidance, with laser effects matched to the extent of the disease.

In the search for better therapeutic alternatives, the role of PDT for both pancreatic and biliary tract cancers has been evaluated. Conflicting and often poor-quality data have emerged on the use of PDT for unresectable bile duct cancers, with little evidence of its efficacy derived from RCTs. Encouraging early-stage studies with PDT for unresectable locally advanced pancreatic cancer are emerging. However, definitive answers regarding the efficacy for PDT in pancreaticobiliary cancers can only be found in RCTs or in similarly devised comparisons with conventional treatment options. 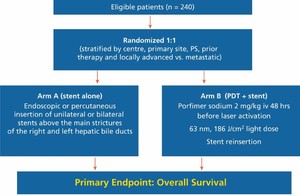