Most patients with hilar cholangiocarcinoma have unresectable disease and require palliation with biliary stenting to alleviate symptoms. Although chemotherapy and radiotherapy have been ineffective, many studies have suggested that the use of photodynamic therapy (PDT) may improve quality of life and perhaps survival in these patients. The ability of PDT to transmit through bile makes it a unique platform for intervention in the biliary tree. This article addresses the clinical implications of endoscopic biliary drainage, explores past and present study findings with PDT for cholangiocarcinoma, and offers an introduction to the novel techniques for direct visualization.

Bile duct transmission is the keynote feature of photodynamic therapy (PDT) and is unique to the gastrointestinal tract, declared Michel Kahaleh, MD, Chief of Endoscopy at Weill Cornell Medical College in New York City. Its ability to reach unreachable or peripheral lesions makes it an attractive palliative alternative for managing patients with cholangiocarcinoma, he added. Most cholangiocarcinomas are unresectable, and biliary decompression is the major objective. Based on the findings of many studies, both past and present, PDT seems to be an effective way to improve the quality of life of patients with cholangiocarcinoma, with randomized controlled trials needed to also confirm its promise in prolonging survival.

“From an endoscopy standpoint, knowing the different segments of the liver is crucial in terms of being able to provide biliary decompression,” declared Dr. Kahaleh. “Everything we do is based on symptoms and imaging,” he added. For instance, the use of MRI and MR cholangiopancreatography (MRI-MRCP) provides adequate information on what area of the liver requires drainage.1

The aim of biliary stenting is to relieve jaundice, which in turn improves symptoms and quality of life.1 In one study of 35 patients with obstructive metastases at the hilum, complete resolution of jaundice was achieved in 86% after a median of 3 endoscopic procedures per patient.1 In this study, endoscopic biliary drainage enabled these patients to receive additional chemotherapy. It is not necessary to treat the entire liver, Dr. Kahaleh explained, because 25% to 30% of biliary drainage may relieve the symptoms of jaundice.

The issue of unilateral versus bilateral drainage in stent placement for unresectable hilar biliary obstruction remains under debate, admitted Dr. Kahaleh. Two retrospective studies illustrate the lack of consensus on this topic.2,3 Naitoh et al2 indicated that biliary stenting was more effective than unilateral stenting in terms of cumulative stent patency, especially in cases of cholangiocarcinoma. However, more recently, Iwano et al3 suggested comparable outcomes in stent patency time and complication-free survival with unilateral versus bilateral drainage. If unilateral drainage is predicted, it must be targeted prior with MRCP, and with injection only in the portion that will be drained,4 said Dr. Kahaleh.

The clinical implications of biliary drainage may extend beyond improvement in symptoms. According to Van Laethemet al,1 complete resolution of jaundice was linked to better survival than incomplete resolution of jaundice (6.5 vs. 1.8 months). Furthermore, they found that patients with colon and breast cancers who were eligible for second-line chemotherapy after optimal drainage had the longest survival (12–16 months).1 Therefore, “it is crucial to work with our oncology colleagues,” encouraged Dr. Kahaleh. “Not only do these patients feel better, with an improved performance status, they may be able to complete their cancer treatment and live longer,” he added.

PDT in the Biliary Tree: “A Unique Platform for Intervention”

To determine whether a patient is a candidate for PDT, several factors should be considered (Table 1). “The first question to ask is, am I dealing with cholangiocarcinoma or liver metastasis,” suggested Dr. Kahaleh. Those patients with liver metastases are not good candidates for PDT; for them, a metal stent would be recommended, he said. Next, the issue of liver atrophy should be addressed. “It is important to determine what area of the liver is atrophic and not draining,” Dr. Kahaleh said.

Another major consideration is the determination between resectable and unresectable disease. Surgery is indicated for resectable disease. “The ability of this therapy to transmit through bile makes PDT a unique platform for intervention,” Dr. Kahaleh emphasized. Finally, a candidate for ablation should receive adequate patient education to understand its goals and consequences. Photosensitivity is the main side effect of PDT, and a strong, experienced support staff can help patients know what to expect and how to handle this temporary condition.

Early studies with PDT for unresectable cholangiocarcinoma5,6 have shown a reduction in cholestasis, improved quality of life, and better survival rates. In one of the keynote studies on PDT in this field, Ortner et al6 found that the combination of stenting and subsequent PDT prolonged survival over stenting alone in patients with cholangiocarcinoma (493 vs. 98 days; P < .0001). “The study was stopped early because there was a dramatic improvement in survival in the PDT group,” explained Dr. Kahaleh. Based on these findings, PDT became the standard of care for these patients in Germany, he added.

Turning to Dr. Kahaleh’s long-term experience with PDT for unresectable cholangiocarcinoma at the University of Virginia, his colleagues reported on their retrospective analysis.8 Although the median number of PDT sessions performed was 1, Dr. Kahaleh admitted that repeated PDT sessions are often necessary. “PDT induces severe necrosis, so the endoscopist must be committed to go back and revise,” he explained. Joining a PDT program is a commitment for both patients and physicians. The median survival neared 6 months, although Dr. Kahaleh mentioned that some patients respond so well that they live for 1 to 2 years afterward.

Another prospective study assessed the surgical and palliative management of 184 patients with hilar cholangiocarcinoma.10 Sixty patients underwent resection, 68 had PDT plus stenting, and 56 had stenting alone. Witzigmann et al10 found that, compared with stenting alone, palliative PDT and subsequent stenting resulted in longer survival (12 vs. 6.4 months; P < .01) and a higher Karnofsky performance status (P < .01). They also found that PDT plus stenting achieved a similar survival to incomplete R1 and R2 resection.

A retrospective analysis of patients with advanced hilar cholangiocarcinoma compared the long-term outcomes with PDT and biliary stenting versus stenting alone.11 Cheon et al11 found that patients treated with PDT lived longer than those who were not treated with PDT (9.8 vs. 7.3 months). Furthermore, significant predictors of improved survival in the PDT group were a lower pre-PDT bilirubin level, multiple PDT treatments, and shortened time to treatment after diagnosis.11

In light of all these positive studies with PDT, Dr. Kahaleh briefly mentioned one of the most negative studies on PDT.12 This multicenter, randomized phase III trial compared PDT plus stenting with stenting alone in 92 patients with advanced or metastatic cholangiocarcinomas and other biliary tract tumors.12 Pereira et al12 reported that after a median follow-up of 5 months, overall survival was better in those treated with stenting alone than in those treated with PDT plus stenting (8.5 vs. 5.6 months). These findings may be partially explained by the fact that fewer patients in the PDT group received subsequent palliative chemotherapy. Dr. Kahaleh cited several other factors to be considered when attempting to place these findings in clinical perspective: 1) patients with metastatic disease were included in the study; 2) the number of PDT sessions was not clear; and 3) the duration from randomization to chemotherapy was longer in the PDT group than in the stenting-only group (102 vs. 36 days).

“Over the past few years, there has been a tendency to do direct therapy, basically to see the bile duct and the lesion while treating it,” revealed Dr. Kahaleh. Better known as direct visualization, this technique represents a new trend. Two such techniques have been explored: single-operator cholangioscopy8 and peroral cholangioscopy.13 With cholangioscopy-guided PDT, it is possible to identify tumor margins, determine the appropriate location for placement of the diffuser, and evaluate response to therapy.13

Choi el al13 reported on their preliminary experience with peroral cholangioscopy with an ultraslim upper endoscope for patients with inoperable cholangiocarcinoma. Although this prospective study was small (9 patients), PDT was performed successfully in 15 of 17 sessions (88%). Biliary drainage under direct peroral cholangioscopy was possible in 7 of 7 patients who needed it after PDT. Dr. Kahaleh shared some intraoperative views using the miniscope (Figure 2). “The whole bulkiness is gone, which is pretty remarkable,” he noted.

With its unique ability to reach unreachable or peripheral lesions in the biliary tree, PDT has become a strong platform for palliation in patients with inoperable cholangiocarcinoma. Many past and recent studies have shown PDT to be an effective way to improve symptoms and possibly survival in these patients, although additional randomized controlled trials are needed to confirm these findings. Furthermore, for PDT to be used successfully, an experienced dedicated team of professionals is needed, and adequate patient education to prevent adverse effects from photosensitivity must be provided.

Direct peroral cholangioscopy-guided photodynamic therapy (PDT) for inoperable cholangiocarcinoma performed with an ultraslim upper endoscope. Endoscopy photographs before (A) and after (B) treatment. Courtesy of Dr. Moon. 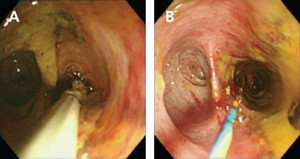