High-Grade Glioma/Glioblastoma Multiforme: Is There a Role for Photodynamic Therapy?

In the United States, the 5-year survival rate for patients of all ages with all types of brain tumors is approximately 20%, with the scale skewed toward even poorer survival in patients with gliomas. Although surgery and radiotherapy are primary treatment options, surgery is rarely curative and radiotherapy has had little impact on overall survival. Predominantly studied in adults with advanced high-grade gliomas, photodynamic therapy (PDT) represents a paradigmatic shift in the treatment of brain tumors. With no clear standard of care for brain tumors, PDT may emerge as a potential alternative, although challenges regarding its clinical use remain and studies confirming its promise are necessary.

“Photodynamic therapy [PDT] has the potential to provide a great service in an area that is very desperately in need of that,” pronounced Harry T. Whelan, MD, Professor of Neurology at the Medical College of Wisconsin in Milwaukee. With no clear standard of care and poor 5-year survival rates, there certainly is room for improvement in caring for patients with brain tumors, and PDT may play a future role. From its use in canine models in the mid-1990s to its application in patients approximately 10 years later, PDT has been emerging as a topic of interest. In this article, Dr. Whelan takes a backward glance at the origins of PDT for brain tumors, describes the clinical challenges to its use in the skull, and outlines the objectives of his phase I study for PDT in children with brain cancer, the second most common childhood cancer after leukemia.

Gliomas are among the most challenging of brain tumor subtypes. The location of a benign tumor in the eloquent areas of the brain could potentially render it inoperable, the presence of a blood–brain barrier limits the ability of systemically administered medications to reach the target site, and the intricate neuronal network makes targeted therapy challenging. Patients with high-grade gliomas (HGGs) in particular have a generally poor prognosis, and surgery is rarely curative.

The use of PDT for brain tumors such as HGGs and glioblastoma multiforme (GBM) moves away from the more traditional resection and systemic chemotherapy methods. With light-mediated activation of a photosensitizer that is selectively accumulated in the target tissue, PDT causes destruction of tumor cells through the production of singlet oxygen or superoxide and induces cell damage through direct and indirect cytotoxicity. Therefore, photosensitizers are the first critical element in PDT procedures, and the activation procedure is the second step, explained Dr. Whelan.

The History of Brain Tumors and PDT: From Canine Models to Humans

The role of PDT for brain tumors of the posterior fossa was originally studied preclinically in a canine glioma model.1 Dr. Whelan and colleagues1 found that a low dose of porfimer sodium (Photofrin) produced tumor kill without significant permanent toxicity of the brain stem in both the control animals and the animals with cerebellar brain tumors receiving PDT. “Children’s brain tumors are more likely to appear in or near the brain stem; adult brain tumors, especially the malignant gliomas, occur in the upper parts of the brain, the cerebral hemispheres,” explained Dr. Whelan.

Ten years later, after this success with PDT in a canine model, investigators turned to humans.2 They tried PDT on a collection of 20 patients with recurrent malignant brain tumors. “These patients included a hodgepodge of children and adults with various brain tumors in various parts of the brain with various drugs,” reported Dr. Whelan. “All of these patients were dying of progressive disease after failing to respond to surgery, radiotherapy, and/or chemotherapy.” As documented on MRI, tumor responses were seen in all of the patients, and the mean time to tumor progression after PDT was 67 weeks.2

“If you subtract out the blood–brain barrier breakdown, you still have cell-specific uptake of the Photofrin,” revealed Dr. Whelan. “Although the vascular effects of PDT are important, they are not the only thing: there is tumor cell-specific uptake. And the longer wavelengths probably penetrate somewhat deeper into tissue.” Because long-term outcomes of patients with these types of malignant brain tumors are generally poor, Dr. Whelan was pleased to announce that 20% of the patients from this study are still alive today.

The Clinical Challenge of Using PDT in the Skull

A major clinical challenge regarding the use of PDT for brain tumors centers on the need for invasive surgery with an adequate system of light delivery. Currently, no device allows the use of PDT without direct access to the area of the brain containing the tumor. The PDT technique begins by “drilling a hole into the skull and scooping out some of the brain tumor,” explained Dr. Whelan. Only the clearly necrotic tumor is removed; the tumor entangled and infiltrating into the healthy normal brain remains to be treated by the PDT.

Interestingly, through his experience with PDT, he found that it might be possible to obtain a clinical benefit without surgical resection. He treated one patient who had a glioma at the brain stem solely with PDT. After a brief period of edema, all brain stem clinical findings resolved, suggesting a complete PDT effect. Unfortunately, the tumor did recur, but it led Dr. Whelan to turn his research toward a noninvasive device, which could deliver a therapeutic dose of light within the 630- to 900-nm wavelength range into the tumor-ridden area while maintaining exposure levels low enough to eliminate any damage to the overlying tissues.

With PDT, Monte Carlo methods for modeling scattering and absorption in tissue (Figure 1) are useful to ensure that the appropriate levels of light are delivered to activate the photosensitizing agent. The output of the Monte Carlo model is a grid representing the summation of absorption events within the tissue, explained Dr. Whelan. Based on the approximation derived via this Monte Carlo model, to achieve a therapeutic dose of 5 mW/cm2, the surface area of a 630-nm pulsed photon source at the scalp would need to be approximately 160 times larger than the source used in the simulation, which may be achievable with a “bonnet” configuration. “With the Monte Carlo simulation, you could get enough light into the deep structures of the brain to have a photodynamic effect by beaming in light on the surface of the head,” he proposed. Through continued investigation, Dr. Whelan deduced that reasonable measurements 4-cm deep could be obtained through pulsing the light at higher intensities than a person could tolerate if it were given continuously. However, this possibility of doubling the usual depth requires additional study, he admitted.

HGGs: Rationale for Moving Away From Traditional Interventions

HGGs such as anaplastic astrocytoma (AA) and GBM account for between 7% and 10% of pediatric central nervous system tumors, reported Dr. Whelan. They often have microscopic tumor extension beyond the “margin,” and historically have been associated with a generally poor prognosis. Dr. Whelan briefly reviewed some of the disappointing results with traditional interventions for HGGs, and the promising findings with PDT from Australia.

Although surgery is seldom curative for HGGs, clinical studies suggest that the more tumor resected, the better the short-term results.3 Based on the findings of the Children’s Cancer Group High-Grade Glioma study (CCG-945), which included a highly select group of children with AA, a progression-free survival of 31 months was obtained in those whose resection was greater than 90%, compared with 12 months for those whose resection was less than 90%.3 Whelan and colleagues also noted that patients with low-grade gliomas had a better overall survival at 5 years than did those with HGGs (79% ± 5% vs. 22% ± 4%).3

Radiotherapy and chemotherapy for children with gliomas have not produced encouraging results,3,4 admitted Dr. Whelan. In CCG-945,3 investigators concluded that aggressive front-line combined chemoradiotherapy did not confer a survival advantage in a highly select population of children with low-grade gliomas. “Although radiation therapy is the mainstay of treatment after resection for older children and adults with brain tumors, it prolongs progression-free survival by about only 4 to 6 months and has little impact on overall survival,” stated Dr. Whelan.

One recent study from the Children’s Oncology Group turned to the use of temozolomide (Temodar) in the treatment of HGGs in children.4 Results from the ACNS0126 study of 107 patients with AA, GBM, or gliosarcoma were compared with those of children treated in the CCG-945 study. No evidence was seen that temozolomide given during radiotherapy and as an adjuvant therapy resulted in improved event-free survival compared with that found in CCG-945.4 In addition, temozolomide failed to improve outcomes in children with high-grade astrocytomas.4

“All these pediatric studies show again and again a 20% long-term relapse-free survival regardless of the treatment,” declared Dr. Whelan. “The only benefit was seen in those who received temozolomide, radiotherapy, and surgery who had expression of MGMT [O6-methylguanine-DNA methyltransferase],” he revealed. In one study,5 patients whose tumors did not have MGMT promoter methylation were less likely to benefit from the addition of temozolomide chemotherapy, compared with those with methylated MGMT. Therefore, overexpression of MGMT appears to be adversely associated with survival.4 In addition to overexpression of MGMT, other molecular targets/prognostic factors for HGG are listed in Table 1.

“Although surgery matters, conventional chemotherapy does not add much, and so we still need something else,” stated Dr. Whelan. In one of the most positive studies of PDT for HGG,6 Stylli et al6 evaluated the survival data on patients treated with adjuvant PDT after surgical resection of the tumor. “They found that you can basically cure 73% of patients with AA and 25% with GBM, as well as 57% of patients with recurrent AA and 41% of patients with recurrent GBM if you just double the dose of everything: 240 J/cm2 of light and 5 mg/kg of porfimer sodium,” stated Dr. Whelan. “They had tremendous results. From the Kaplan-Meier survival curves, you could see that they were getting better results for both primary and recurrent tumors,” he added. Older age at the time of diagnosis was associated with a poorer prognosis, and higher light doses were linked to a better prognosis.

Multicenter Phase I Study of PDT for Brain Tumors in Children

To determine whether the benefits from PDT achieved in the Stylli study could be achieved in children, Dr. Whelan and colleagues are conducting a multicenter phase I study of PDT in children with recurrent or progressive brain tumors deemed to be refractory to conventional therapy. The primary objective is to determine the maximum tolerable dose (MTD) of porfimer sodium in children via a dose-escalation scheme. The secondary objective is to assess the effectiveness of PDT in terms of improvement in progression-free survival, overall survival at the 1- and 2-year post-PDT time points, and brain tumor response. With an estimated accrual time of 5 years, a minimum of 12 pediatric subjects will be required (4 dose levels with 3 subjects in each dose level).

Clinical follow-up includes neurologic and radiographic assessment. Neurologic evaluation will occur daily for subjects in the hospital, weekly after hospital discharge for the first 4 weeks, at 3-month intervals (or more frequently as required) for 1 year, at every 6 months for 1 year, and then annually or more frequently as required. MRI scans will be acquired 1 to 3 days postoperatively, 4 to 6 weeks postoperatively, and every 12 weeks until tumor response or progression for the first year, and as required thereafter.

Because results with conventional interventions for brain tumors have been disappointing, investigators are hopeful that ongoing studies with PDT will confirm its early promise and suggest a growing role for this nontraditional treatment option. In closing, Dr. Whelan listed several topics regarding PDT that are worth pondering: the long-term benefit of low, slow fluence rates; the truth about its immune effects; the role of fluorescence-guided resection; and the new emerging data suggesting that the oxidative stress effects of nitric oxide metabolism may interfere with some of the oxidative free radical reactions on which PDT depends. 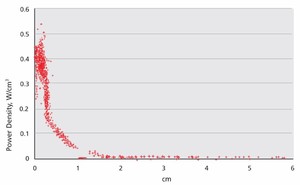