The diagnosis of lung cancer was significantly enhanced by the development of the fiberoptic bronchoscope in 1965. Since then, advances in photosensitizers and light sources have brought photodynamic medicine into the light. This article offers an historic overview of the emergence of photodynamic medicine through the perspective of a pioneer with more than 30 years’ experience. Along with a discussion of photodynamic diagnosis of lung cancers via optical coherence tomography, the curative, palliative, and neoadjuvant roles of photodynamic therapy for early and advanced lung cancers are explored. An emerging strategy of using PDM to treat peripheral early-stage lung tumors is briefly discussed.

Along with preventive strategies for eradicating lung cancer, detection and localization of small early-stage lung tumors are crucial for obtaining better therapeutic results, stated Harubumi Kato, MD, PhD, Professor, Department of Surgery, Tokyo Medical University, Japan. As a thoracic surgeon with more than 30 years of experience in photodynamic medicine, he believes that early-stage lung tumors can be completely treated with local noninvasive endoscopic treatments such as photodynamic therapy (PDT). The goals of PDT in lung cancer are curative for early-stage superficial lung tumors; palliative for relieving the symptoms of anchored, obstructive, advanced lung tumors; and neoadjuvant for reducing the resection volume. In this article, Dr. Kato shares a backward glance at where PDT has come from and a forward glimpse at where it may be heading.

The Birth of Fluorescence Bronchoscopy for Diagnosing Lung Cancer

The diagnosis of lung cancer was significantly enhanced by the development of the fiberoptic bronchoscope in 1965. “However, as superficial carcinomas in the extremely early stage could not be recognized by an ordinary bronchoscope, we tried to develop a fluorescent bronchoscope in 1978,” revealed Dr. Kato. Joining colleagues in the United States, Professor Profio and Dr. Doiron of the University of Southern California and Professor Dougherty of Roswell Park Memorial Institute, Dr. Kato researched the use of photodynamic diagnosis (PDD) for lung tumors.

“After 2 years of extensive preclinical research by a canine lung cancer model, we began the clinical application of endoscopic PDD,” he explained. In 16 cases of lung cancer, a hematoporphyrin derivative (a mixture of porphyrin compounds that have an increased affinity for malignant tissue) and laser photoradiation were combined in an attempt to localize these tumors.1 Tumors were irradiated 48 hours after intravenous injection, and fluorescence was observed in 13 cases.

Early clinical experience with PDD as an endobronchial tumor indicator was published in the 1980s and 1990s.2,3 Fluorescence imaging using a hematoporphyrin derivative or Photofrin II (porfimer sodium) as a tumor marker facilitated the bronchoscopic localization of early squamous cell carcinoma of the central tracheobronchial tree.2,3 However, Dr. Kato stated, improvement in false-positive fluorescence was still required during this period.

After years of continuous research efforts on fluorescent bronchoscopy, the Pentax System became commercially available in 2005. With this system, PDD permits precise localization of early lung tumors (Figure 1). In addition, PDD can be applied to localize invisible lesions, aid in preoperative assessment for surgical incision, and estimate response to PDT.

“For precise PDT, it is also important to evaluate the depth of tumor invasion for the staging of lung cancer, particularly Tis, which is very good indication for PDT,” stated Dr. Kato. He briefly addressed 2 technologic types of tumor staging: endobronchial ultrasonography (EBUS) and optical coherence tomography (OCT).

Miyazu et al4 evaluated the use of EBUS in selecting appropriate candidates with centrally located early-stage lung cancer for PDT. They performed EBUS in 18 patients with biopsy-proven squamous cell carcinomas. Half of these lesions were found to be intracartilaginous on EBUS, and subsequently PDT was performed on these lesions. The other half were found to be extracartilaginous on EBUS, and therefore other therapies such as surgical resection, chemotherapy, and radiotherapy were performed. They concluded that in addition to conventional bronchoscopy and high-resolution CT, EBUS is a useful way to improve outcomes with PDT in patients with centrally located early-stage lung cancer.

OCT can be used to clarify the depth of mucosal tumor invasion. In a case of carcinoma in situ, OCT may show thickening of the superficial layer with intraepithelial tumor invasion with a well-preserved basement membrane. “This is a very good indication for PDT to obtain complete cure,” Dr. Kato stated. In a case of dysplasia, OCT may show swelling of the superficial layer. “In the future, you may not need an invasive histologic biopsy; tissue structure may be analyzed by light interference,” he predicted.

Clinical studies have shown PDT to be an effective treatment for early-stage, superficial lung cancers.5–7 In a multicenter phase II study,5 85% of 59 assessable cases of early-stage, centrally located, squamous cell carcinoma showed a complete response after initial PDT (with porfimer sodium and an argon dye or excimer dye laser). The median duration of response was 14+ months. Skin photosensitivity was seen in 1.9% of patients. Based on these data, PDT became a standard approved treatment in Japan, declared Dr. Kato.

Another multicenter study with PDT used talaporfin sodium (Laserphyrin in Japan) and a diode laser.6 Of 41 patients with 46 early-stage, centrally located squamous cell cancers, again a complete response rate of 85% was achieved with PDT. In addition, skin photosensitivity disappeared within 2 weeks. In 2002, PDT with talaporfin sodium and a diode laser was approved in Japan.

Dr. Kato shared several case reports illustrating curative results with PDT for early-stage lung cancer (Figure 2). His first case of PDT was for a tiny squamous cell carcinoma detected with sputum cytology in a 74-year-old man. A curative result was obtained. In another case, a 59-year-old woman with asthma and poor lung function underwent PDT. She was completely cured and now is 90 years old.

PDT represents a palliative alternative for patients with advanced lung cancer. Indications for PDT for advanced lung cancer center on improvement in symptoms and maintenance of quality of life (Table 1). For this patient population, PDT can decrease airway obstruction and tumor stenosis, often leading to better respiratory function.7 In addition, PDT may help resolve acute hemoptysis and poststenotic pneumonia and enhance performance status.7

Several reports of PDT for palliation of symptoms of advanced lung cancer have shown its benefits, stated Dr. Kato. For instance, Dr. Kato shared his early experience with PDT for treating 15 consecutive patients with advanced squamous bronchogenic carcinomas; symptomatic relief was achieved in all patients. McCaughan et al8 also used PDT to reduce the degree of obstruction from tracheobronchial tree neoplasms in 18 patients. Within a month of treatment with PDT, 40% of the patients had no visible tumor in the area treated and 57% experienced reduction in the tumor or degree of obstruction by more than 50%. Also, more than 60% of these patients were clinically improved, with an increase in performance status.

Dr. Kato reviewed several of his own cases to illustrate his positive experience with palliative PDT. In one case, PDT improved a patient’s dyspnea due to stenosis of the trachea caused by a large tumor at the carina. In another patient whose right middle lobe bronchus was almost obstructed, PDT opened the bronchus (Figure 3). And recently, he used PDT in combination with chemotherapy to treat an obstructive tumor of the bronchus with possible invasion through the bronchial wall. Six months after treatment, no recurrence has occurred. Dr. Kato believes that using PDT in combination with other cancer treatments warrants further study.

In the preoperative setting, PDT can increase operability or reduce the extent of resection required. Dr. Kato shared some of his experiences with PDT before surgery. In 1985, 15 patients with lung cancer were treated with a combination of PDT and surgery.9 Surgery was performed 1 to 9 weeks after laser PDT. In 7 of 10 patients who were originally candidates for pneumonectomy, the extent of resection was reduced to lobectomy or bilobectomy. Furthermore, 4 of 5 originally inoperable cases were converted to operable as a result of PDT.

In another report,10 bronchoscopic PDT reduced the extent of surgical resection or converted inoperable disease to an operable status in 22 of 26 patients with lung cancer. In this group of patients, surgery was performed 2 to 9 weeks after initial PDT. In addition, the survival rate of 7 patients with tumor invasion to the main bronchus treated with surgery alone improved from 51% to 60% with the application of preoperative PDT.

Finally, Dr. Kato shared his results with preoperative PDT in a patient with locally advanced lung cancer who had poor pulmonary function caused by dyspnea. CT showed a tumor located at the bifurcation between the left upper and lower bronchi and swelling of the number 11 lymph node. After PDT, the tumor disappeared; thoracotomy was then performed, and the bifurcation and the number 11 lymph node were resected. “In cases of superficially extended squamous cell carcinoma at an advanced stage, bronchoplasty after PDT may be possible for increasing operability or reducing the extent of resection,” concluded Dr. Kato.

As a result of the increased risk of developing second primary lung tumors, adequate diagnostic and noninvasive therapeutic modalities are needed to manage them. “CT screening for early detection of peripheral lung cancer has been spreading out around the world, and the tiny cancers can be detected frequently by CT,” stated Dr. Kato. “As small-sized cancers showing pure GGO detected by CT are low malignant bronchioloalveolar cell carcinomas or adenocarcinomas in situ without lymph node metastasis, it will become possible to treat them curatively with PDT,” he predicted.

Two novel therapeutic approaches for peripheral early-stage lung cancer are transthoracic robotic needle PDT and navigational bronchoscopic PDT, reported Dr. Kato. Several patients with pulmonary dysfunction have been treated with transthoracic PDT by Dr. Kato and his colleagues. The tumors in these patients were very large, at 1.2 to 8.0 cm. Although Dr. Kato admitted that further study of this technique in larger numbers of cases is necessary to evaluate its efficacy, partial response was obtained in 78% of these patients.

PDT represents a promising yet currently underused alternative treatment modality for patients with lung cancer. Based on more than 30 years of experience with PDT, Dr. Kato considers it a definitive monotherapy for early-stage, centrally located non–small cell lung cancer. PDT also appears to be an effective palliative measure for improving many of the symptoms of advanced lung cancer, and may prove to be of use as a neoadjuvant component of multidisciplinary therapy for patients with locally advanced disease. Finally, emerging strategies for using PDT to treat early-stage peripheral lung cancer appear promising but require further study. 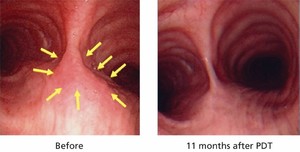 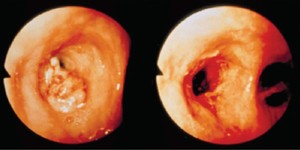