The Immunobiology of Photodynamic Therapy: The Potential for Therapeutic Intervention in Lung Cancer

Studies have shown that photodynamic therapy (PDT) causes or enhances an antitumor immune response. Moving from a mouse model in lung cancer to a translational approach, researchers are conducting an ongoing observational study to determine whether the immune response in patients with lung cancer treated with PDT is mediated by a T-cell phenotype, which may result in decreased tumor size and potentially improve survival. Preliminary findings focus on certain inflammatory cytokines that may be predictive of these T-cell phenotypes, such as interleukin (IL)-12, IL-4, T-regulatory cells, and T helper 17 cells. Correlation of the immunobiology of PDT associated with outcomes and surrogate markers may allow clinicians to predict improvement in patients treated with PDT and improve prognostic counseling.

“Photodynamic therapy (PDT) is a novel therapy but not an unknown therapy,” stated Susan Moffatt-Bruce, MD, PhD, of the Division of Thoracic Surgery, The Ohio State University Wexner Medical Center, Columbus, Ohio. With a background in transplant immunology, Dr. Moffatt-Bruce has turned to her current research on the use of PDT for relieving the symptoms of endobronchial disease in patients with lung cancer. Dr. Moffatt-Bruce shared the very early findings of her current study to determine whether the immune response in patients with non–small cell lung cancer (NSCLC) treated with PDT is T-cell mediated. She briefly explored the ongoing journey to clarify the immunologic response of PDT in patients with lung cancer in the hope of optimizing the ability to predict patient outcomes and translating the defined immune profile of PDT treatment in lung cancer into effective therapeutic interventions.

One review served as a background for the rationale behind exploring the immunologic consequences of PDT in cancer treatment.1 van Duijnhoven et al.1 addressed the effect of PDT on the immune response in patients with solid tumors. They suggested that through destroying the structure of a tumor, PDT enables direct interaction between immune cells and tumor cells; this type of “in situ vaccination” induces a systemic antitumor immune response.1

Another retrospective review (coauthored by Dr. Moffatt-Bruce’s colleague and mentor Dr. Patrick Ross)2 focused on the incorporation of PDT into the induction therapy regimen for locally advanced primary nonmetastatic NSCLC bronchogenic carcinoma. Fifty percent of patients initially deemed unresectable were able to undergo definitive surgical resection after trimodality induction therapy consisting of PDT with chemotherapy and/or irradiation.2 In addition, 27% of patients considered to require pneumonectomy were able to have a lobectomy after trimodality induction therapy.2 Finally, the pathologic stage was less than the preinduction clinical stage in 14 of 22 cases, of which 4 patients had no residual tumor.2

“As any good T-cell biologist, I had to go back to my understanding of what a local versus a systemic response might be,” admitted Dr. Moffatt-Bruce. A local response to PDT, consisting of microvascular damage, apoptosis of cells, and ischemia to tissue, leads to a decrease in tumor size, with relief of symptoms. A systemic response to PDT may lead to an increase in survival.

“Not too dissimilar from transplant models in heart transplantation research, the more antigen presented, the more immunotolerant you could render an animal,” she added. “Therefore, was the microvascular damage being created by PDT actually an antigen presentation that was setting up a positive response or a systemic response that could be mediated by a T-cell phenotype?”

Figure 1 illustrates an algorithm of the PDT/antigen presentation, which centers on naive T lymphocytes (innate immunity) developing into a CD4+ phenotype. As a result of this process, 1 of 2 patterns occurs: a tumor suppressor phenotype or a regulatory phenotype. According to Dr. Moffatt-Bruce, it may not be one or the other but rather a feedback loop: “Initially a phenoaggressive type could elicit this tumor suppression or inflammation, and thereafter a regulatory phenotype in the form of a T-regulatory cell or even a [T helper 2] Th2 cell could help provide this ongoing suppression.” Furthermore, this may be only one arm of the pathway, she continued, “and, in fact, the innate immune system and the macrophage may be a bigger part of this story going forward.”

Moving From a Mouse Model to a Translational Approach

OSU 07115 is an ongoing, nonrandomized, observational cohort study of PDT using porfimer sodium in patients with NSCLC and obstructive or hemorrhagic endobronchial disease.3 Its central hypothesis is that PDT in patients with lung cancer results in an inflammatory environment that directs the T-lymphocyte phenotype to an aggressive Th1- or Th17-type response, which results in decreased tumor size and potentially improves survival.

The study, which is still recruiting patients, is designed to enroll 105 patients with lung cancer and obstructive or hemorrhagic endobronchial disease. Somewhat naive to adjuvant treatment, these patients would not have undergone radiotherapy or chemotherapy within 6 months of starting on this trial. The experimental arm will receive PDT (3 bronchoscopies) and the control arm will not receive PDT (1 bronchoscopy).

Using a KRAS mutation mouse model of lung cancer (Figure 2), Dr. Moffatt-Bruce assessed how best to collect samples and the optimal timing for collection of samples and analysis. Based on this mouse model, the groups of particular interest in terms of immune response were the ones focusing on local action (PDT to the tumor site), systemic action (PDT to the opposite shoulder), and test of antigen requirement (PDT to the former tumor site; Table 1). The peripheral blood, spleen, and tumor samples were collected at 4, 8, and 24 hours and 14 days posttreatment. Blood and spleen samples were used for fluorescence-activated cell sorter analysis. Protein and RNA samples were prepared for future analysis.

“In the spleen, we found an upregulation of T cells, particularly CD4 as well as CD8, only in the presence of tumor and treatment at the same site or more peripherally from the tumor [Table 1],” declared Dr. Moffatt-Bruce. Although she admitted that these findings were not conclusive, “we were on track looking at T-lymphocyte responses.”

Thus far, 25 patients have been recruited on the treatment arm, with 7 having all time points chosen. Table 2 lists the 83 initial inflammatory cytokines examined. Dr. Moffatt-Bruce acknowledged that “it is a very broad net to start with, and probably we will need to slim it down as we go forward.”

Preliminary findings indicate a delayed response in plasma expression. “For the majority, the upregulation only occurred among these cytokines between the pre and final treatment, which is the major time of upregulation,” reported Dr. Moffatt-Bruce. From the preoperative time frame to late treatment, platelet-derived growth factor BB (PDGF-BB), monokine induced by gamma interferon (MIG), and hepatocyte growth factor (HGF) were all upregulated, she added.

“When we look at the microenvironment [BAL fluid], the upregulation of these cytokines occurred much earlier,” Dr. Moffatt-Bruce noted. Despite IL-6 showing a large change from early to late measurements, no others were significant due to biologic variability. Dr. Moffatt-Bruce found these early findings “a bit surprising,” and they did not correspond with those in the blood. “This is disappointing, as we want a predictor or some sort of surrogate marker that we could take a blood sample from, rather than having to use the bronchoscope,” she explained. She plans to continue to look at these data as future analyses are performed with more patients.

In terms of patient outcomes, all of these first 7 patients were alive at 6-month follow-up. Unfortunately, none was alive at 12-month follow-up. “As we move forward and have more patients accrued into the study, we will have a better idea as to the feasibility of associating the immune response with outcomes,” Dr. Moffatt-Bruce declared.

The immune response in patients with lung cancer treated with PDT is likely mediated by a T-cell phenotype. Preliminary research findings focus on certain inflammatory cytokines that may be predictive of these T-cell phenotypes, such as IL-2, IL-4, T-regulatory cells, and Th17. The overall objective is to translate the defined immune profile of PDT treatment into effective therapeutic intervention for patients with lung cancer.

“We have a bevy of patients that allow us to look at whether PDT can be measured by a surrogate marker. We are on a journey to see whether it is possible to optimize the ability to translate and predict outcomes for our patients receiving PDT,” concluded Dr. Moffatt-Bruce. 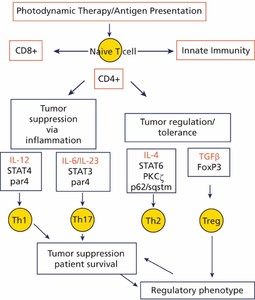